krypto origin2
Originally uploaded by waffyjon.
Krypto arrived today! His plane arrived at Sea-Tac on schedule, and even as I type, he's sitting on my lap!

My good buddy Tony Isabella has very generously decided to plug this blog in his online column, which you can check out for yourself by clicking Here!

Hopefully, this will bring a bunch of new readers to this blog, and for those of you who've just found this, welcome, and I hope you'll enjoy it!

For the next few days, I'll undoubtedly be mostly posting stuff about Krypto (see below posts), but I'll try to get some other interesting stuff in here for ya, too!

krypto origin
Originally uploaded by waffyjon.
The breeder called us at 6 am to let us know Krypto did, indeed, make his flight out of Oklahoma... hopefully, it'll be a much more routine flight than the one the comics' Krypto made from Krypton! 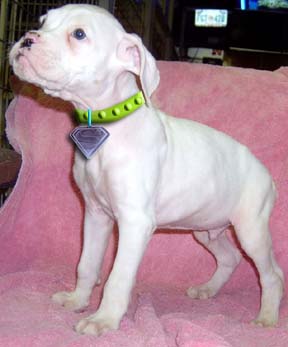 Well, as I write this, it's still Tuesday... but the breeder sent a new picture of Krypto to us today that I had to share... after doing a bit of retouching on it, natch! The "collar" in this picture is entirely created in Photoshop, but the tag is from a scan of the real name tag I've got for him!

If any of you reading this comes across a yellow dog collar that looks like the classic Krypto collar in your area, please let me know at waffyjon@comcast.net with the price, and what you'd like for shipping, okay? I've got one collar for him already, which has a double-row of studs, but he won't be able to wear that until he's much bigger... and I need a puppy-sized collar for now! As I think I've mentioned before, he'll be flying from Oklahoma to Sea-Tac Airport, where my girlfriend Jessi will pick him up (she'll be joined by Bridget, a friend of ours who also happens to own a white boxer). I'd definitely prefer to go get him myself, but unfortunately, I couldn't get the time off of work (someone else had vacation time already scheduled).

So, on Wednesday, I'll take my lunch break to go to Jessi's apartment to let her boxer, KO, out on a bathroom break (because Jessi won't be back in time for that), then back to work, where Jessi will meet me when she's back in town with Krypto.

From there... well... we're not quite sure what we're going to do, to be honest! Jessi wants to have us both at her place when KO meets Krypto, so I may have to keep him at the office for my last few hours of the day, in the crate he'll be arriving in. I don't want to just put his crate in my car, because he'll have already spent too much time cooped up somewhere he's alone anyway!

I suppose we'll figure it out one way or another... and, of course, if it turns out he's bumped from the flight, it'll all happen Thursday! newcrusaders
Originally uploaded by waffyjon.
So... I've mentioned before the fondness I have for Archie's super-heroes, and that I had some ideas for bringing 'em back...

Well... the pic you see here is part of my idea! The new Mighty Crusaders was something I started working on a few years back, but never bothered submitting it (I'd keep hearing about revivals planned, so figured it wouldn't do any good... of course, none of those revivals happened).

As you can see, there were a few changes planned in the characters... My idea was that all the stories that had been published before had more-or-less happened, even if they didn't happen quite the way we saw them (that last revival, which skewed WAY out of control after Rich Bucker was booted from the line, would be part of the continuity about up to the point where the Black Hood suddenly got an attitude and smoked cigars, and the Crusaders started getting around using a flying roller coaster).

So... time has passed. The Crusaders broke up, there were no major villainous threats, and it's been peaceful for some time.

People age, y'know... I figured that most of the original characters would be retiring, if they hadn't already, with the exception of the original Shield (who'd spent some time in suspended animation, plus the way he became the Shield could've easily given him a longer lifespan), the Comet, and the Fly.

Yep... towards the end of the Red Circle version of the Crusaders, Thomas Troy's career as an attorney was not doing so great, and his relationship with Kim Brand (aka Fly Girl) was on rocky times. The only part of his life that consistently worked for him was being The Fly... and no matter what his age, when he was the Fly, he was at a fixed age, and in great health.

I imagined that the Shield, Comet and the Fly ended up operating more or less in secret, and also full-time... The Fly would've given up his Thomas Troy identity, and let all his personal relationships fall by the wayside, save for his friendship with the aforementioned Shield and Comet. The trio would operate out of the Comet's spacecraft.

As I said, time has passed, and there are some surprises in store! You no doubt noticed that Fly Girl's costume is different, and that some Crusaders have changed genders!

Well, part of the reason for that is that I wanted this revival to embrace the legacy concept... this Fly Girl is actually the daughter that Thomas Troy never knew he had... when his relationship with Kim Brand broke up, she went off to Hollywood to pursue her acting career, but never told Thomas that she was pregnant with their daughter. Eventually, her daughter comes across Kim's Fly ring and realizes her mother was Fly Girl, and assumes the identity herself.

The new Black Hood would be the niece of the last Black Hood, Kip Burland. The Black Hood identity has always been passed along from family member to family member, and I thought it would be interesting if we had a female Hood for a change... Kip would've trained her as she grew up (the backstory would've been that her parents died in an auto accident, and Kip retired from being the Hood to raise her, being her only family). He took her into his confidence, letting her know of his identity as the Black Hood, but her training isn't intended to be to take on the identity, but rather to make sure she's capble of self-defense. I intended that Kip would've been crippled by a past foe who learned his identity and wanted revenge, providing the motivation for the new Hood to assume the identity. Hadn't really settled on her civilian name, though... calling her "Kim" would cause confusion with the original Fly Girl after all, so "Karen" or "Kate" would've probably been it.

The new Jaguar is kind of a tribute to DC's !MPACT variation on the characters... and she'd be the hand-picked successor to the original Jaguar, using the magic belt to continue the fight.

The Hangman and Web characters presented here would be completely new people in the identities... with no relationship to the originals, except perhaps for the new Hangman having the original's magic rope (although I kind of like the idea of not having a magic rope, but instead having this guy be very good with a rope... perhaps a former rodeo star). The new Hangman would definitely be the grim character of the group, and would be admitted into the new Crusaders mainly so the rest of the team could keep an eye on him.

The new Web character is the one I've put the least amount of thought into, to be honest... I thought the costume needed a re-design, and that the original Web would be way too old to keep doing this! I considered making him the son of the previous Web, but that's too obvious. Most of my thoughts about the Web were that he'd be a highly-trained acrobat/martial artist type, with a sense of humor... and that in keeping with his name, there'd be some kind of Internet connection... perhaps his costume has a built-in computer that would allow him to access the World Wide Web, giving the team their information expert.

The team would be gathered together by Colonel Lancelot Strong, who was known as the second Shield. When last seen in the Red Circle comics, he'd fallen into a chasm in the earth that closed in on him, leaving him apparently dead. In my concept, that didn't kill him, but in his exertions to free himself, he "used up" his powers (so far as he's aware), and went on to establish a more military career, getting involved at higher government levels so that he's now in charge of a new government defense agency responsible for dealing with out-of-the-ordinary threats to the nation and the world.

The reason Col. Strong gathers a new team together is because he's been on the trail of the Brain Emperor (and I never really liked that name, so I was going to come up with a new one), who's been keeping a very low profile since his last encounter with the Crusaders. I was also toying with the idea of him taking on an apprentice, who would have actually taken his place some time back, and somehow also taking on all his abilities. The new BE would have long-reaching plans, moreso than his predecessor, and have a lot of plots going at the same time.

Along the way, the Crusaders would also be investigating what happened to so many of the other heroes, such as the Fox, Black Jack, Captain Flag, Mr. Justice, and so forth. Some of these could end up returning, some may have someone new taking the identity, and some may be gone forever.