This Hulk shirt apparently dates from 1975... amazing how someone kept this and the previous '75 shirts I've posted photos of in the packaging, eh?

Movie of the Week TRIPLE FEATURE!

Yes, it's another Triple Feature! First up is "Canadian Mounties Vs. Atomic Invaders," a movie serial! One of the more oddball titles I've featured, eh? Even knowing how popular Gabby Hayes was in the movies, I'm still surprised the comic lasted so long! First item up for viewing this time around is page 4 from Strange Tales #84, by Jack Kirby!

So, the news has been out for a few days that the Spider-Man movie franchise is being rebooted instead of continued. There are opinions galore as to whether this is a good thing or not.

Me? Well, I'm of mixed opinion... on the one hand, I would've liked to have seen what Spider-Man 4 might have been like, and if they could've recovered from Spider-Man 3, which I generally thought was not a good movie. On the other hand, perhaps a rebooting of the franchise, casting Spidey younger and having a chance to rework things from scratch could well be a good thing...

I suppose it all is a matter of timing. I understand they're shooting for a 2012 release for the new movie (as yet untitled, apparently... might I suggest "Amazing Spider-Man"?), and it's possible that enough time will have passed for movie audiences to accept a reboot.

There are a few problems inherent with franchise reboots of any kind, obviously... any movie series will have its fans who are against the idea of starting over, and one has to consider whether or not these "core fans" are a large enough percentage of the overall viewing public to really matter.

Overall, I think it's best when there's been a fairly long period of time between the last movie in the original series and the reboot. "Star Trek" is a good example of this (even though it's as much a reboot of the original series as it is of the movie series). "Batman Begins" is another. Both of these series were pretty much dead in the water, and needed a reboot to reignite interest, I think.

I think there's a few other franchises that could well benefit from a reboot, but I think I'll keep my list confined to comic book-based properties, and this will be a short list.

First of all is "Fantastic Four." While the movies were fairly successful, I do feel they strayed from the original material quite a bit. Keeping closer to the comics continuity might be a benefit to the series... and perhaps it would be a good idea if they stayed away from Doctor Doom if they ever do reboot this series. With today's CGI capabilities, I can't help but think that a movie featuring the FF vs. the Mole Man would be fantastic -- can you imagine all those Kirby Kreatures brought to life?

Second is "Superman." Let's face it, "Superman Returns" was just a bad idea. Trying to tie in to the Christopher Reeve movies didn't work, and neither did the casting, for the most part. They need to simply start over again, and get away from the ideas that were so embedded here. The costume didn't need a redesign (if it ain't broke, don't fix it, people!). And if they ever reboot this franchise, can we stay away from an origin sequence? I think just about everybody knows the origin. Let's start with the players already in place, and go from there. Maybe consider taking a cue from the Bond movies, and open with Superman battling one of the lesser villains from the comics, then go to the credits, and then get into the actual film plot itself. I'm also thinking that it's best to stay away from Lex Luthor -- yes, he's Superman's arch enemy, but for crying out loud, he's been used in all but one of the Superman movies to date! Brainiac might be a good villain option, and perhaps use Toyman in the teaser, so Superman can battle some giant menacing robot toys.

One of the problems with doing a "Superman" reboot, however, is with "Smallville" still on the air (and apparently looking at a 10th season), that show is getting closer and closer to Superman all the time... so maybe we need to wait until Smallville ends before even starting to look at revving up this franchise again.

Things You Always Wanted to Know About Monsters... But Were Afraid To Ask, Part 1!

So time for something different from the usual Wednesday feature... instead of a monster magazine to be reviewed, I'll be presenting for a while pages from Tony Tallarico's book, "Things You've Always Wanted to Know About Monsters... But Were Afraid To Ask!" This book was published by Grosset and Dunlap in 1977. My copy of this book was purchased at a garage sale last summer for probably a buck, and was a great bargain! Urgent Request to the Blogosphere!

I am desperately seeking anyone who happens to own a copy of the Star Wars "Empire Strikes Back" Give-A-Show Projector set -- as you may have learned, I won a copy of this recently on eBay, and I knew it was missing the first slide strip. If you or someone you know owns a copy of this toy and can provide me with a 600 dpi scan of that first strip, I would be eternally grateful!

Please pass along this request on your own blogs -- I can be reached at waffyjon at comcast dot net! And thank you! This week's Monster Monday begins with some pages from the Spanish pressbook for "Creature From the Black Lagoon"! More Creature (and other stuff) after the jump!

And now, for something completely different (yeah, that's a cliche for Python-related posts, isn't it?)... You'd think by now my photos would be named so they'd go together, wouldn't they? I mean, I posted a Holy Grail still what, a week ago? 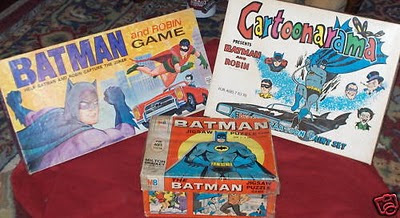 Check out the above lot of super-cool Batman stuff I won on eBay last night for the bargain price of $18.50 plus $8 shipping! I cannot believe I actually won it!

Here's the description from the auction:

THIS AUCTION CONSISTS OF:

Now, I've seen the Jigsaw Puzzle Game and the Hasbro game go for very big bucks, to say nothing of the Cartoonarama kit, so I'm pretty stoked about this win! Hopefully, the seller will be prompt in shipping it. 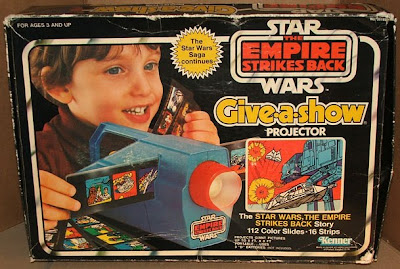 Here's another fairly recent win that arrived today! I'm pretty happy about this one, too, because I've seen the Empire Strikes Back Give-A-Show set go pretty high, too! Once I've got the 1960 and 1961 Give-A-Show sets prepared in video form, I'll get right into scanning and working up this one! Here's something different for me... it's page 2 from Speed Comics #28, by Joe Kubert!