Movie of the Week: Mutiny in Outer Space!

Here's the trailer, with memorabilia following after the jump!

Well, now that that massive Marvel stuff parade is done, let's see what we have to show this time! This is kind of a nice idea, the Phantom Jungle Playset from 1976... too bad the animals aren't to scale... More stuff after the jump!

Just in case any of you happen to have never seen this before... or feel like watching it again!

Dog of the Geek: Droopy! 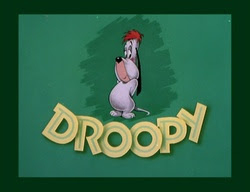 Breed: Basset Hound
Original Appearances: MGM Cartoons from 1943 through 1958
Other Appearances: Various comic books, cartoons, and assorted merchandise.
Biography: Droopy has no established biography.
Powers: Ability to maintain cool under pressure, superstrength when he does blow his cool, teleportation.
Group Affiliation: Varies from cartoon short to another, but has included the Canadian Mounties.
Miscellaneous: Droopy, of course, was one of the classic MGM cartoon characters, created by Tex Avery. His deadpan expression and distinctive voice, combined with his amazing ability to outwit and outmaneuver any foe, makes him a delight to watch in the original cartoons. Unfortunately, he hasn't fared so well in most modern appearances. I think I may get through all of this volume's Marvel goodies with this post! I may have shown these stickers before, but I believe this is a larger photo than I posted last time! More Marvel stuff after the jump!

Since last time I had the two short chapters 2 and 3, part 3 is Chapter 4! Issue 410 brings us Porky Pig yet again! More after the jump!

Did I mention this yet?

About a week ago, I set up a Facebook page for Random Acts of Geekery that also shows latest posts from all the other blogs I run... you can check it out here if you're on Facebook, and never miss anything!
Posted by Jon K at 6:36 AM 2 comments:

Time for another installment of Monster Monday! And our first item this week is the box for the 8mm home digest of "The Beast With Five Fingers"! Note how Peter Lorre's last name was misspelled on the box! More after the jump! The first comic page I have for you this time around is page 6 from Famous Funnies #97, by Dick Calkins! More after the jump! Wow, still more Marvel stuff to show this time around! Here's a header card for the Marvel Mini Comics that were sold through vending machines! More after the jump!