First up is the Marx Toys Sky Heroes, the only one that featured a hero who could actually fly! More after the jump! Here's what I believe is my first "done-in-one" installment of Children's Book Theatre, because this is such a short book! Read it after the jump!

Movie of the Week: Mysterious Island!

Are any of you wondering when this will ever end? Well, let's see... how about this time around? First up this time around is Four Color #1210, with a comics adaptation of "The Parent Trap," which I'd imagine is a book that Sleestak of Lady, That's My Skull has in his collection! More after the jump!

Give-A-Show Fridays: Sabrina the Teenage Witch and The Amazing Chan and the Chan Clan!

I felt like it was time for a Popeye month here at the Random Acts of Geekery, and to make it even greater, I'll present two Popeye cartoons with each posting of Random Videos of Geekery, with the second one occurring after the jump! First piece of art up this time around is Giant-Size Spider-Man #5's cover, by Gil Kane! More after the jump!

Don't worry, it's not a huge change... just wanted to give my faithful readers a bit of a head's up! Blogger has decided to be nicey-nicey with Amazon.com, and make things a bit easier for those of us in the Amazon Associates program (which I am). So, starting next month (they started it at least in March, but I'd already done all the posts through June, and didn't want to go back over all of them), selected posts will have a few Amazon.com links at the end of them -- they won't always be every post on a particular day, or even every day! Right now, I can tell you that there will be links for related product on the Random Videos of Geekery and Original Comic Art posts... but there won't be any for Give-A-Show Fridays, I'm pretty sure!

Children's Book Theatre may have one here and there, especially if Amazon's listing original copies of those books (probably not going to be the case with coloring books, I'm guessing). Cool Stuff posts may or may not have them, depending on what I'm posting photos of and if there's something related to that being offered... and the same goes for Monster Mondays. The Dog of the Geek posts? Well, they may or may not have them. I'll try to show some restraint!

In the meantime... as you start reading this blog next month, please let me know if you find the ads at the end of the posts to be annoying or not... I'm hoping they won't be obtrusive, and that maybe you guys might find out about something you may not have known about before (and if you find something too cool to miss, I hope you'll buy it through my link so I can earn a little extra cash)!

Well, it should be all Superman stuff after this first item... This amazing set of 6 Superheroes Duncan Yo-Yos were in one single auction! All the Superman stuff follows after the jump! I hope you guys aren't getting tired of Four Color Comics, because we've still got a ways to go! This time around, we begin with issue 1110's Bonanza, and it looks like the Cartrights are trying to keep their pants up, eh? More after the jump!

And now: The Conclusion! It's the last Monster Monday for June! And first up this week is the German poster for "Curse of the Mummy's Tomb"! More after the jump! 1975 was a good year to be a kid who liked Star Trek! This sweatshirt above was just one of a line of Star Trek shirts available in stores like JC Penney -- they also had uniform shirts! I had a command gold one myself that I all-too-quickly outgrew! Dog of the Geek: Rex the Wonder Dog! 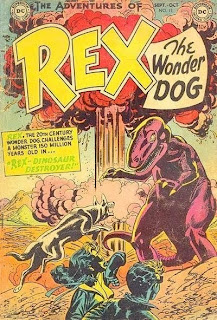 Breed: German Shepherd
Original Appearances: Rex the Wonder Dog comics
Other Appearances: Sporadic DC comics apperances from 1977 to the present
Biography: Rex spent his early years in the U.S. Army's K-9 Corps, where he was used as a test subject for a super-soldier serum which enhanced his strength, speed, stamina and intelligence. He was later adopted by Major Dennis, and began his career as a crime-fighting dog. Rex was also involved in a team-up with the not-yet-formed early Justice League members. Later, Rex (along with Detective Chimp) took a drink from the Fountain of Youth, allowing them to stay young and vital for... well, maybe forever! By 1991, Rex had also developed the ability to speak, and how to use “force of mind” similar to Gorilla Grodd.
Powers: Originally, Rex simply had amplified strength, speed, stamina and intelligence. He now also possesses eternal youth, the ability to speak, and “force of mind.”
Group Affiliation: Superboy and the Ravers, Shadowpact (modern-day version)
Miscellaneous: Rex has been considerably modified since his original appearances, possibly to get him away from being a knock-off of Rin-Tin-Tin and the like. Rex was also possibly influenced on Streak the Wonder Dog, who had appeared in the Golden Age Green Lantern comic. Apparently, “Pooch” of “The Losers” is Rex's brother!

In my opinion, this trailer is for the absolute BEST Godzilla movie of the series that started with Godzilla 1985! Could well be the best of all of 'em, but I'd have to watch every one over again to be sure...