And we continue looking at Walt Disney's Coloring Book as the Disney studio is still getting ready for their broadcast! More after the jump!

Movie of the Week: Navy Vs. the Night Monsters!


All the posters and other goodies after the jump! First up in this edition of all Bat-Stuff is this 1966 Marx Toys Bat-Phone! More after the jump!

Give-A-Show Fridays: The Harlem Globetrotters and the Roman Holidays!

Wow, you'd have thought I'd done this By the 10s in early February for Valentine's Day, wouldn't you? Here's issue 10's cover, and it only gets better or worse from here (depending on how you look at romance comics covers)! More after the jump!

Email ThisBlogThis!Share to TwitterShare to FacebookShare to Pinterest
Labels: by the 10s, dc Here's another Hulk page to start out this week's edition, it's page 22 from Incredible Hulk #196, by Sal Buscema and Joe Staton! More after the jump!

Time for a new book in our Wednesday Monster Book/Magazine feature! Monsters, Maidens & Mayhem, a Pictorial History of Hollywood Film Monsters, is a paperback book I found at a garage sale well over a year ago for probably a quarter. It's far from the best book on monsters that I've ever owned (or read, for that matter), but it's got to be the oldest one! And apparently, I did get an amazing deal on it, as you'll see when you get to the end of this entry!

Got to mock it a little bit, though... under the "By Brad Steiger" byline, in small print, it says "SPECIAL ILLUSTRATED EDITION" -- which is kind of a WTH? moment for me when I noticed it... if it's a Pictorial History, what is it that makes this edition a "special illustrated" one? If it wasn't illustrated, it would hardly be a pictorial history, would it?

Check out the interiors after the jump! It's coloring book time again at Children's Book Theatre, and this time around, it's Walt Disney's Coloring Book! I forget if I purchased this one at a garage sale or as part of an eBay lot, but here it is... or rather, here it is after the jump!

A few non-Batman items before we get into the Bat-Stuff... First item up this time around is this 12" Mego Spider-Man on the card! More assorted coolness after the jump!

Time for another pair of Popeyes, with the second one after the jump! First up on this week's Monster Monday is this mint-on-card Dracula action figure from Lincoln International -- although it looks to me like it should be an action figure for "I Was a Teenage Dracula"! More after the jump!

Dog of the Geek: Thor! 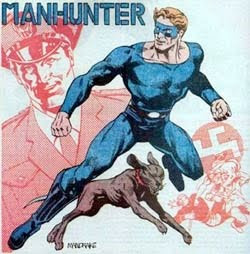 Breed: Some sort of police dog, part hound and part mastiff, although really a Manhunter robot (at least, post-Crisis).
Original Appearances: “Manhunter” strip in Police Comics #8-101
Other Appearances: All-Star Squadron and Infinity, Inc.
Biography: When policeman Dan Richards took on the identity of Manhunter, he wasn't aware that the Manhunters who provided him with his sidekick Thor were androids who were originally created by the Guardians of the Galaxy, nor that Thor himself was not really a dog, but rather a robot that the Manhunters used to monitor him. It wasn't until “Millenium” that Thor's true origin was discovered.
Powers: As a robot dog, Thor was no doubt built to have abilities beyond those of biological dogs.
Group Affiliation: Manhunter Society
Miscellaneous: Thor's long life was attributed by Dan Richards to special treatments that the Manhunter Society had done. Thor accompanied Richards long after he'd given up his Manhunter identity, and ended up turning against him.  It's possible that the pre-Crisis Thor was really a mortal dog, as the Manhunter Society origin was revealed post-Crisis. By the 10s: The Flintstones!

Been a while since I did a by the 10s for a TV title, hasn't it? In fact, this may be the first! The Flintstones title began as an issue of Four Color Comics, then issues 4-6 were published by Dell, switching over to Gold Key with issue 7! And here we go! Issue 10! Pretty good likenesses, if you ask me! More after the jump!