Movie of the Week: The She Demons! Not much more for this one, but you can see it all after the jump!

CBT: The Story of Superman, Part 4 - Superman in Metropolis! Commenting Requirements Have Been Changed

Thanks to the abuse of the anonymous option for leaving comments yesterday, I have had to make a change here. For the time being, nobody will be able to leave anonymous comments.

The vast majority of people who do leave anonymous comments are able to do so without resorting to calling anyone names, and even include their name on their comment... just as I'm sure that the vast majority of this blog's readers are reasonable people.

And sometimes it just takes one unreasonable person to cause a problem.

I'm sorry I had to resort to this option... if there was a way to just set comments so that anonymous comments had to be approved, I'd go with that. For this week's installment of Fandom Library, I have the promotional comic book that Mattel commissioned from Marvel Comics, which was included with the Big Jim Wolf Pack Commander figure! This should be all-Spider-Man stuff this time around, beginning with this Spidey Bike Siren! More after the jump!

Sheesh, I can't believe I managed to completely forget to do X-Men by now! So here's issue 10's cover, introducing Ka-Zar to the modern Marvel Universe, if I'm not mistaken! More after the jump! 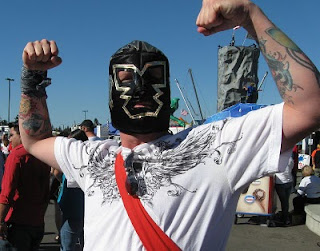 One of the disadvantages of working so far ahead on the Random Acts of Geekery is that occasionally, things can change from the time something's prepared to when it actually appears. This interview was conducted via e-mail back on April 9, but bit over a month after Reis answered all my questions, he unfortunately decided to retire “Geek Orthodox.” Still, I'm not one to let anything go to waste, so consider this second installment of “The Way of the Geek” to be a tribute to a blog that has passed, and a blogger who is definitely worth celebrating!

Of course, having written that way back when I was writing the article, Reis has returned to blogging, with two new blogs, Hey, Look at My Toys! and Hey, Look at My Art! Go check them out, if you haven't already!

Reis O'Brien was born “after Scooby-Doo, but before the Superfriends,” in his words. His only sibling is his older brother, eight years his senior, which Reis said made it feel like he was an only child. He claims to be married to the greatest woman on Earth (I'm sure many other married readers of mine will contest that claim), and he has two cats. He's employed as a graphic designer and illustrator.

Reis is what I like to call a “polygeek,” being into comics, D&D, toy collecting, cartoons, and about all other forms of geekery except LARPing (Live Action Role-Playing). As to where his geekery began, Reis said, “It probably started when I was 4 years old and I first saw the Batman TV show. I became enthralled with that show and wouldn't stop talking about it and trying to make drawings of Batman. Shortly after that my formative mind collided with the release of Star Wars and it was all over from there on out.” Here's today's first ad, for the (as it turned out) one-shot Spirit World that Kirby worked on. One of these days, it'll be appearing here in "Fandom Library," so those of us who haven't read it yet will finally get your chance!

Oh, this was also an October, 1971 cover-dated DC comics ad. Moving on to the October, 1968 cover-dated Charlton comics, here's a house ad for three of Charlton's numerous horror titles! Of the three, I'd have to say my favorite has always been "The Many Ghosts of Doctor Graves," and you can be sure sooner or later, that title (as well as the other two) will start appearing over on the Comics Reading Library blog!

So why was Doctor Graves my favorite? I suppose there's just something appealing to me about a character whose life is devoted to hunting down the supernatural. Gold Key had their Doctor Spektor with his Occult Files, and I loved that book, too. Both were an influence on me when I created my own character, Joshua Judges, who was a monster hunter (at the time, I didn't realize that Charlton also had a Monster Hunters comic book). I suppose in some ways, Kolchak the Night Stalker influenced me there, as well. This was way before X-Files, so that wasn't an influence on me at all. I suppose if I were to ever win the lottery and could afford to start up my own comics company, I'd revive the Joshua Judges concept and use it to headline a horror anthology comic book. We'll wrap up this installment with another ad from the October 1968 Charltons. Regency Mail Order seems to have been one of those rivals to the Johnson Smith Company, who's much better known for this kind of stuff. Or perhaps it was absorbed into Johnson Smith? A quick bit of Googling reveals that they advertised in Archie and other comics as well. So far as their products being exclusive? I don't buy it... the X-Ray Spex, Joy Buzzer, Trick Baseball, Miniature Spy Camera, Pepper Gum, and Fly In Ice, among other things, were all routinely offered by Johnson Smith as well! To read this issue, do the clicky thing!

Sheesh, now I'm just two years away from the half-century mark. How the heck is it that I'm so old, anyway? It's not as though I feel that old -- I mean, when I check out the people from my high school graduating class on Facebook, it seems to me that most of them have aged much more than I have!

Then again, when I think of all that I've seen in my lifetime... I was born as the Silver Age was well under way, and the Beatles were hitting America for the first time. I've seen man walk on the moon, the Space Shuttle... computers being these massive things you only saw in TV and the movies to the first home computers (Apple IIs, TRS-80s, Vic-20s) that were practically toys to the first real computers that could be used to do real work... I've seen computer-based communications start with the simple text-only dial-up BBS set-ups and go on to faster modems and the early days of the internet to nowadays when most people not only have high-speed internet at home, many have it on their cell phones! Heck, I've seen cell phones appear seemingly out of nowhere as these bulky expensive things and transform over time to small devices that can do an amazing amount of stuff, and are so cheap that almost anyone can have one!

And I've seen the passing of a lot of great people that influenced me greatly in ways they could have never been aware of... too many to list in their entirety, but I'd have to put John Lennon, Jack Kirby, Groucho Marx and Jack Benny right at the top.

I've gone from being a kid wanting to create comic books to spending five years in the navy as a journalist (and being exposed to desktop publishing, from which I'd make my living for over 20 years) but still trying to break into comics (and not succeeding) to being a civilian again working mostly as a word processor with some graphics work, then when I was out of work, meeting my first wife through the internet and moving to Wisconsin to be with her, finding work there that lasted just over five years, living through my first wife dying a month before 9/11, then moving back to Washington State, eventually getting that job at the newspaper (the job I'd really wanted all that time, at least if I couldn't work in comics), meeting my current wife, and getting Krypto, getting married, adopting two wonderful kids, buying a house, and now going back to school for an entirely different career I know I'll love even more than graphic design...

And I've even managed to kind of sort of do some comics-related work through doing transcriptions, first for Twomorrows and then later working with Andy Mangels on DVD special features... and finally getting my first LOC published in a comic book, that being one of the E-Man one-shots (OK, I'd had probably a half dozen or more letters published in the CBG along the way)... and of course, I can't forget starting up this blog and all the spin-offs...

And I feel most of the time as though I'm just really getting started, you know? I still have things I plan to do, such as making it to the San Diego Comic-Con one of these years (I went once when I was in the Navy), making it out to the East Coast and visiting Washington DC and New York City, eventually traveling to the UK... and one of these days, I'll have to start dusting off some of my fiction ideas and finishing them up, and see if I can find a publisher.

48 years? I'm far from finished, my friends... you ain't seen nothing yet!

A live performance, John forgets some of the lyrics (as he tended to do)!

Dog of the Geek: Bulletdog! Breed: Cocker Spaniel or mix
Original Appearances: America's Greatest Comics #6
Other Appearances: Other Bulletman stories.
Biography: Bulletdog, aka Slug, was given his powers via a gravity regulating collar, similar to the helmets used by Bulletman and Bulletgirl.
Powers: Bulletdog's collar gave him the ability to fly and magnetically prevent bullets from reaching his body.
Group Affiliation: Bulletman Family.
Miscellaneous: Some websites claim that Bulletdog wore a helmet like his masters did!
Posted by Jon K at 12:01 AM 2 comments: Time for another installment of Monster Monday, beginning with the above poster for "The Beast With 1,000,000 Eyes"! More after the jump!

CBT: The Story of Superman, Part 3 - When Superman Was Superboy! It's the third book of four! First up in this week's parade of original comic art is page 3 from Popeye #29, by Bud Sagendorf! Time for a new Retro-Review, and this time I've selected The Green Lama #4, which was edited by Joseph Greene, art edited by Mac Raboy, with layout and lettering by Rhoda Lewis. This book was cover-dated April, 1945, and published by Spark Publications.
Click for more ->
Posted by Jon K at 12:01 AM 1 comment: