Movie of the Week: The She-Wolf of London! Pressbook - click for larger views! This is another one I don't have much for, but what there is you'll find after the jump! Something a bit different this time around... this UK giant games book (the giant must've referred to the page size, not the page count) was something I originally considered for Puzzle Sunday possibilities, but it worked out best for CBT! This week's installment is this wonderful book featuring the art of the incomparable Neal Adams! This book and volume 2 should really be reprinted in a deluxe edition, with additional pieces added, but until then...


This wraps up the Six Million Dollar Man from Kenner and Chad Valley!

Time to look at some more comic book ads! 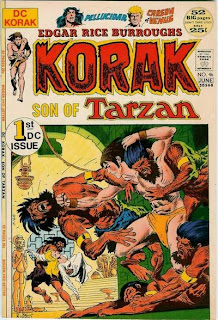 First up, from DC's April, 1972 cover-dated books is this ad for DC's Korak, Son of Tarzan! One odd thing about this ad was how prominently featured the artists' names were - Alan Lee Weiss, Mike Kaluta, and Frank Thorne... and then there's Len Wein's writing credit! It's also odd that the cover image wasn't used in this ad! Best that I can figure is that the cover hadn't been designed yet? Given the cover date of the comic this ad appeared in, I can only guess this was for issue 46, and you can see the cover to the right here. As blurbed, it was DC's first issue, the numbering having been taken over from Gold Key.

Now, this brings up an interesting story I recall reading somewhere (although I don't recall where). When Gold Key's Tarzan license expired and DC picked it up, DC apparently only planned on doing the Tarzan book, and no others, even though Gold Key's Korak title had (obviously) 45 issues under its belt. If I recall the details correctly, the Burroughs agent asked DC if they were doing a Korak book, too, and when they were told they weren't, DC was informed that Gold Key's Korak book was one of their best-selling titles (maybe even better-selling than Tarzan?). So this prompted DC to suddenly add a Korak book to the roster, although as you can see, other Burroughs properties were put in there as well. DC also did a Weird Worlds book featuring Burroughs concepts, and both those titles eventually were folded together into Tarzan Family before DC's license expired, and Marvel picked up the ball (so far as I know, all Marvel did with the Burroughs stuff was Tarzan and John Carter books). Next up, it's another house ad... for DC comics subscriptions! The art looks like it was probably done by Infantino, although the kid in the Superman sweater almost looks like he belongs in Kirby's Newsboy Legion! Three bucks for a one-year subscription sounds pretty cheap, doesn't it, when most comics these days are cover-priced way over that! The word "Blockbuster" is used a lot in DC's house ads, but it certainly applied to the Kirby Fourth World books, even if sales didn't necessarily turn out that way. One thing you can't say is that DC didn't give the Kirby books a great push in their ads! Sometimes I wonder how it was that those titles didn't take off like rockets, and the best I can figure is that both DC and Marvel were producing so many new titles at the time in order to try to crowd each other off the racks (as well as Gold Key, Archie, Charlton, Harvey, and whoever else was around in '71) that the books just didn't have enough time to find the right audience! Of course, these days, all the titles are hailed as classics in comics!

Vic Sage is the author of the blog “In My Youth, Victory Was a Power Pellet”, which mainly deals with vintage video games. He was my first volunteer to be a subject of “The Way of the Geek”! Yes, “Vic Sage” is the name of the original Question's secret identity... some of my fellow bloggers enjoy their anonymity!

NOTE: Since this interview was conducted, there've been a few changes in Vic's blogging activitites... see the end for an update!

Vic is an only child, and was born on March 6th, 1972. He has an interesting story about his birth, and I'll let him take it from here: “I was born in the city of Fayetteville Arkansas, to be honest I was at the Washington County Hospital but my mother waited too long and I was delivered in the back of the taxi cab she had called at the emergency entrance.” How many of us have as interesting a story about our birth as that?

Recorded for "Yellow Submarine," here they are performing in the studio! Aside from Simon and Kirby creating this title, I'm not really all that knowledgeable about it! Above is issue 10, more after the jump! To read this bio/tribute to Forry, do the clicky thing! Because of the length, I'll serialize it over two posts, with the conclusion next week!

We'll at least start out with Star Trek stuff this time around, then seque into some Superman stuff! First up, here's Mego's Andorian action figure! There'll be more after the jump!

CBT: Batman From Alfred to Zowie! A classic children's book with the Caped Crusader!

Dog of the Geek: Wonder Dog! Breed: Labrador Retriever, possibly a half-bloodhound.
Original Appearances: Hanna-Barbera's Super Friends cartoon (1973).
Other Appearances: First six issues of Super Friends comic book.
Biography: Wonder Dog is the pet of Marvin White, a superhero-in-training with the Super Friends. Apparently, Marvin views Wonder Dog as his sidekick.
Powers: Wonder Dog has the ability to bark in such a way tha the can be understood by the Super Friends. He is also able to use gestures and charades to get his point across. Wonder Dog may also be smarter than Marvin (not too difficult a task, admittedly) and Wendy!
Group Affiliation: Super Friends
Miscellaneous: Other versions of Wonder Dog have appeared in DC Comics (incorporated into the DCU in Teen Titans #62, August 2008), as well as the Justice League Unlimited episode “Ultimatum” (according to Dwayne McCuffie, anyway). Apparently there was also a “New Adventures of the Wonder Twins” TV series on Adult Swim that guest-starred Wendy, Marvin and Wonder Dog.

Email ThisBlogThis!Share to TwitterShare to FacebookShare to Pinterest
Labels: dc, dog of the geek

This week's installment begins with "Destroy All Monsters!" And there's other monsters to come after the jump!

This time around, I'm looking at a few ads from the April, 1972 cover-dated DC comics, although some of the ads may have appeared elsewhere, too! Ah, I fondly remember this line of model kits from Aurora... Prehistoric Scenes came out around the midst of my major dinosaur mania! As a kid, I was so into dinosaurs that I read every single book I could get my hands on about them... and for that time period, I actually looked forward to my family's annual trips to the Dakotas to visit relatives, because Rapid City, South Dakota (my birthplace) had a museum with an amazing array of dino fossils... and also had Dinosaur Park, with four or five life-sized dinosaur statues! Ah, those were the days!

I recall that I had the Flying Reptile, Neanderthal Man, and the Sabertooth Tiger (the only model series I owned more of were the AMT Star Trek line). The most epic one of the kits was the Tyrannosaurus Rex, which was HUGE! I never got that one, unfortunately, although I always wanted it... it must've been too much for me to afford.

If you want the low-down on this incredible model series, complete with details about the reissues, go check out the My Aurora Prehistoric Scenes Model Site, which does a great job! Next up, here's a house ad for House of Mystery #201, which I decided to scan and share just because of the awesome lettering on the ad! 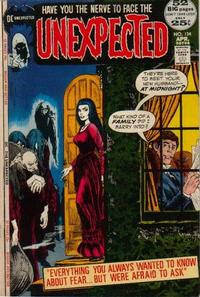 And here's one more house ad, this one for The Unexpected #134! Again, it's the lettering that I dig the most about this ad! You can't tell it from this cover image, but the coloring was quite different on the actual comic. Oh, heck, may as well show it to you to compare! I'm not sure that this was really "D.C.'s Best" as the ad claimed, but I know the same blurb was used for bunches of other house ads!

Random Videos of Geekery: The Beatles "I Am the Walrus"

Time for another parade of original comics artwork! First up is page 4 from Planet of the Apes #21, art by Herb Trimpe and Dan Adkins! More after the jump!

Email ThisBlogThis!Share to TwitterShare to FacebookShare to Pinterest
Labels: comic art, marvel, planet of the apes The second story in this book features the Boy Champions in “A Bull into a China Shop!” The Boy Champions were one of those kid gangs that were populating many comics in imitation of the Newsboy Legion, the Young Allies, and others of their ilk. The boys were Tuffy (obviously the tough kid), Mickey (the regular fella), and Wellington (rich kid). This story features art by Jerry Robinson, with a story by Joseph Verdy. The style doesn't seem to be very reminiscent of Robinson's Batman work, but rather appears to be aping the Simon-Kirby style.