And for the third ad this time around, here's something from 1974 Gold Key comics, I forget which month. These iron-on transfers of Roach Studios designs are another thing that looks like an amazing bargain, eh? I have to admit, none of these look particularly interesting to me right now!
Posted by Jon K at 12:01 AM No comments: Along with what appear to be mixed-up backs, I seem to be missing a number of them, to boot!

Movie of the Week: Son of Dracula! The trailer and more will follow after the jump! CBT: Howard the Duck in "The Menace From Outer Space!" I don't know how many of you are likely to check this one out, especially given that it's based on the Howard movie! Myself, I rather enjoyed the movie, but perhaps I wasn't going into it expecting some kind of serious film, but rather a bit of fluff. Anyway, check this out if you feel up to it! Time to start on Volume 14 of my "Cool Stuff" photo archives, and I'm beginning with the above two 12-inch Mego figures of Captain America and the Hulk with Fly-Away Action! After the jump, lots of other assorted coolness!

Chris Sims is one of the more famous comics bloggers I've approached for “The Way of the Geek,” and I really appreciate getting his participation. As many of you probably already know, Chris is the mastermind behind “Chris's Invincible Super-Blog”, and he's also the senior writer for ComicsAlliance.com, an Eisner-nominated site, and writes for other freelance projects. Time for the first By the 10s for December, and this time around, it's Comedy Comics! I know little of this title, so just enjoy the cover gallery! It's a short one! And here's the first of the bonus posts for this month, so called because they'll guarantee you four new posts per day through Christmas! This time around, it's the first half of the Superman: The Movie trading cards! I'm pretty sure that I don't have the correct backs matched up with the right fronts... but I hope you'll enjoy them anyway! So this year's Christmas Countdown is going to be a little different from previous years... to start off, I'm serializing The Best of DC Comics Digest #58, 10 pages per day!

Get Ready for December!

Because this December is going to be jam-packed here at the Random Acts of Geekery! Once again, I'll be doing a Christmas Comics Countdown, but it'll be a bit different this time around, as I'll be serializing several Christmas Comics of the past every day from December 1 through 25!

And as if that wasn't enough, I'm also adding some bonus posts through those first 25 days of December, so that there will be four -- count 'em, four! -- features each of those days! Hopefully those won't slow down your browsers too much, my friends!

Naturally, come December 26th, things will get back to what passes for normal around here, with two to three items per day!

A special treat for you guys this time (well, I think it's a special treat, anyway)... two complete stories from Speed Comics, plus more! Dog of the Geek: Hot Dog! Breed: Sheepdog
Original Appearances: Archie comics, beginning in Pep Comics #224 (December 1968)
Other Appearances: Archie cartoons.
Biography: While in his original appearance, Hot Dog was shown as being Archie's dog, most often he has been shown as the pet of Jughead Jones. Hot Dog is lazy, constantly hungry, and does not like Reggie Mantle one little bit (good taste, eh?). He is the mascot for The Archies, and is seen pretending to conduct the band in the cartoons. Hot Dog tends to fall for Veronica Lodge's pedigreed dogs, and at one time had a sidekick, Chili Dog, with him he would have “battles” with Sabrina the Teenage Witch's cat, Salem Saberhagen.
Powers: Hot Dog's main power seems to be the ability to think like a human, although he does not speak at all.
Group Affiliation: The Archies
Miscellaneous: Lou Scheimer has made the claim that Hot Dog was created for the first Archie cartoon series that Filmation produced, but it appears that he was mistaken. However, an argument could be made that because of the extensive use of Hot Dog in the Archie cartoons, he was used more often in the comics. This week's edition begins with Frankenstein Meets the Wolfman, but there's still more after the jump!

This time around, we've moved on to March, 1979 cover-dated Marvel books! First up is this ad that appeared on the inside front covers of that month's Marvels. I'm not sure which movie was the first to go for advertising in the comics... in the 1970s, it was probably either Superman: The Movie or Star Trek: The Motion Picture, but this one certainly followed up on that trend! It's been a long time since I've seen this movie, a remake of the original, but I recall that it wasn't quite as exciting to watch as the original one was. Next up, here's a full-page house ad for Marvel's Shogun Warriors comic book, which was penciled by Herb Trimpe. Based on the toy line that Mattel produced in the late 70s (itself imported from Japan and featuring robots in several anime shows in Japan), this book, like the toy line, lasted until 1980. Apparently, despite the initial push on the toys, the spring-loaded weapons were a concern for parents groups (you may have heard about Kenner's similar issue with their first Boba Fett figure, which had to be reworked).

Anyway, Marvel's Shogun Warrior comic wasn't based at all on the original Japanese robot anime stories, but was rather an all-original concept (probably developed by series scribe Doug Moench). As with many of Marvel's toy-based books of the era, there was no real storyline in the toys to use as a basis for a comic, so something had to be created.

I actually had one of the original big Shogun Warriors figures as a kid (well, not so much a kid, I'd imagine... in 1979 I would've been what, 17? That can't be right... I know I had a Raideen, so something's wrong with the sources I've found about the Shoguns starting around then.

Anyway, one of the best sources for Shogun Warriors information (and galleries) can be found here! And finally, here's a full-page ad (with really crappy production work) featuring full color posts or various stars of the time... the McNichol kids (Kristy was a star of the show "Family"), the Coneheads from Saturday Night Live, 70s icon Farrah Fawcett, Farrah's replacement on Charlie's Angels Cheryl Ladd, KISS, Lynda (Wonder Woman) Carter, and Susan Anton. Of these posters, if I had decided to order one of them, it would've likely been for the lovely Ms. Anton... probably because she was fairly tall, to be honest! If you're not familiar with her (and this ad does not do her justice), here's what that poster actually looked like: 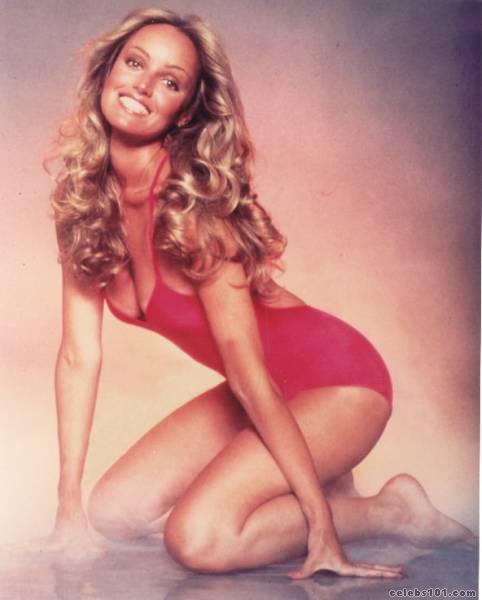 I trust no other explanation is necessary? To ensure this retro-review finishes up this month, here's a double-dose!

The next feature in this comic features pilot Rick Masters! In this story by Walter Gardner and art by Mort Lawrence, the blurb reads: “You've heard of the fourteen mile limit beyond which the law of the U.S. Doesn't apply? So had Second Deal Dan. But he decided to try it a different way... straight up in the air! Rick Masters and his side-kick have the cards stacked against them in a wild flim flam of a cold deck swindle when they declare themselves in on a game where... 'The Sky's the Limit!'”