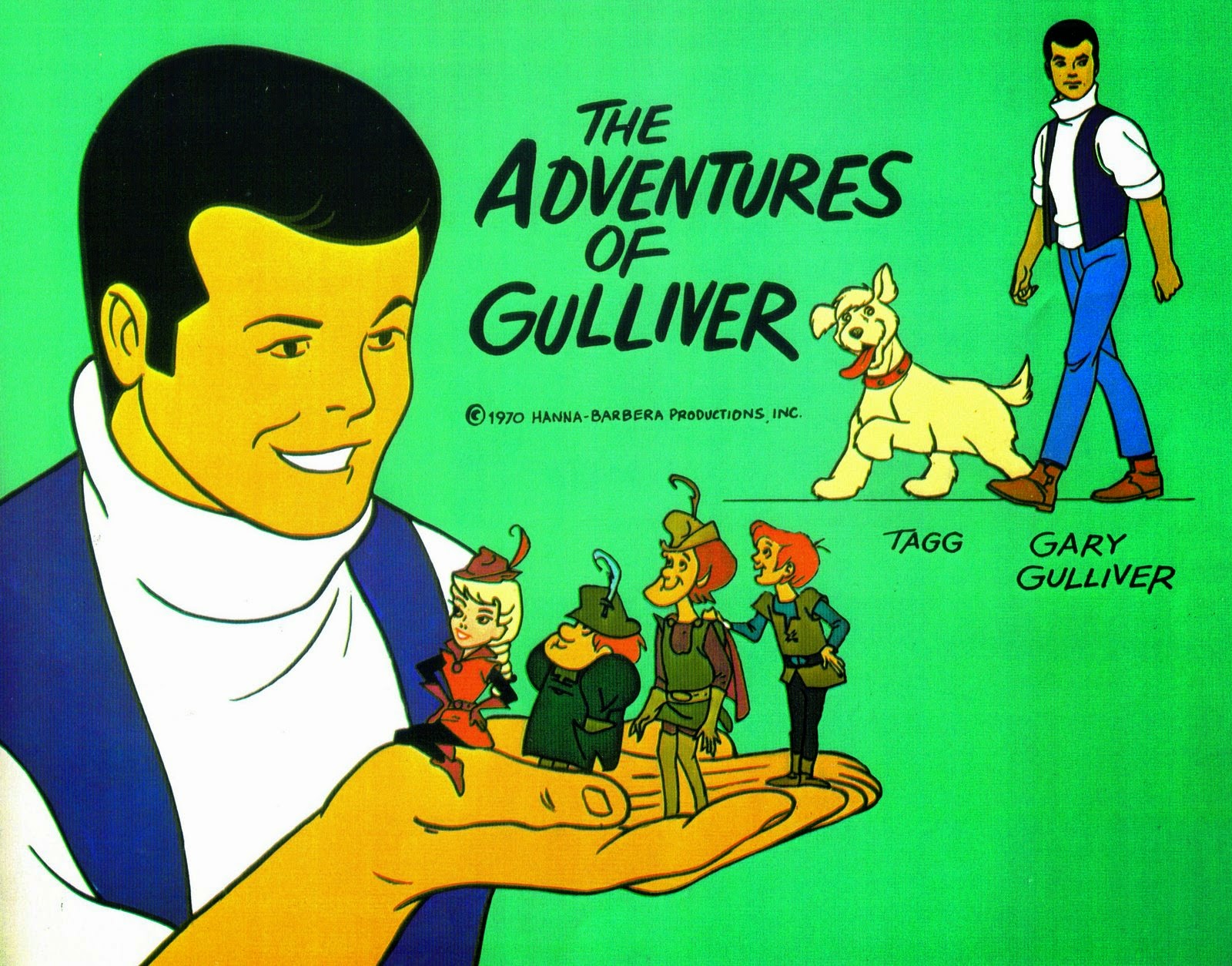 Concept: Based loosely on Johnathan Swift's Gulliver's Travels, the series focuses on Gary Gulliver and his dog, Tagg, who are searching for Gary's father when he's shipwrecked on an island inhabited by the Lilliputians. The Lilliputians help Gary search for his father and a treasure using a map Gary's father left to him while avoiding the clutches of the evil Captain Leech.

Gary Gulliver (Jerry Dexter): The hero of the series, Gary is a young man, probably in his late teens or early 20s. He's pretty much like most of Hanna-Barbera's young heros, sometimes headstrong, defiant but essentially a good person.

King Pomp (John Stephenson): King of Lilliput and father of Flirtacia, King Pomp appears to be rather useless as a leader, yet the people love him.

Eger (sometimes spelled “Eggar” or “Eagger”) (Don Messick): A heroic Lilliputian, sort of their own Gary Gulliver in many ways.

Glum (Don Messick): As his name would indicate, he's a glum Lilliputian, most of his lines are along the lines of, “It'll never work,” or “We'll never make it.”

Flirtacia (Ginny Tyler): Princess of Lilliput, she lives up to her name.

If you ever watch episodes of this show on YouTube, Gary's voice should be well familiar to you, as Jerry Dexter had previously done the voice of Chuck on Shazzan!, Aqualad on Aquaman, and later voiced Alan M. Mayberry on Josie and the Pussycats, Hal on Sealab 2020, Ted on Goober and the Ghost Chasers, Sunfire on two episodes of Spider-Man and his Amazing Friends, Drak Jr. in Drak Pack, and Superboy in an episode of Super Friends.

Don Messick's name should be well familiar to you if you're a cartoon fan, just a few of his other voice roles included Ruff and other characters on The Ruff & Reddy Show, several voices on Quick Draw McGraw, Pixie, Boo Boo, and others on The Huckleberry Hound Show, reprising his role as Boo Boo for The Yogi Bear Show, Bandit and Dr. Quest on Jonny Quest, So-So on Peter Potamus, Mr. Peebles on Magilla Gorilla, Bamm-Bamm and others on the Flintstones, and many, many other roles, although his best known role is probably originating the voice of Scooby-Doo.

John Stephenson had a long history in film and TV before starting a career in voice work, beginning with the Narrator on Ruff & Reddy, he also voiced Fancy-Fancy and the Sergeant on Top Cat, also di the voice of Dr. Quest on Jonny Quest (at least, according to the Internet Movie Database, both he and Messick did the voice), Colonel Fusby on The Peter Potamus Show, and many, many other shows. He was also the voice of Marvin on Super Friends!

Ginny Tyler started her voice career with various voices on The Gumby Show and later did Sally Hansen, Elaine Hansen and other characters on Davey and Goliath, Casper on The New Casper Cartoon Show, Jan and the Black Widow on Space Ghost, and Sue Richards on the 1978 The Fantastic Four, among other roles.

When you see the name Allan Melvin, you probably first think of his role as Cpl. Steve Henshaw on The Phil Silvers Show (aka Sgt. Bilko). He also voiced Sgt. Snorkle on the 1963 Beetle Bailey TV series, originated the voice of Magilla Gorilla, provided assorted voices on The Flintstones, voiced Drooper for The Banana Splits Adventure Hour, was Sam on The Brady Bunch, voiced Wacky and Packy on Uncle Croc's Block, Electro on two episodes of Spider-Man and His Amazing Friends, Thun and King Vultan on Filmation's Flash Gordon, Bluto in the 1987 Popeye and Son, and many, many other roles, both voicework and onscreen.

The series was written by Joe Ruby and Ken Spears, who had written episodes of Space Ghost and The Herculoids, among others. Later, they developed what later became Scooby-Doo, Where Are You? They also wrote and produced shows for DePatie-Freleng Enterprises before forming Ruby-Spears Productions, which produced shows such as Fangface, The Plastic Man Comedy Show, Thundarr the Barbarian, and the 1988 Superman series. That company was later sold to Taft Broadcasting, becoming a sister company to Hanna-Barbera before being spun into RS Holdings, with their library of shows going to Turner Broadcasting.

Notes: While the series only lasted for one season of 17 episodes, it was added to the syndicated package The Banana Splits and Friends, which used the opening and closing credits of The Banana Splits to include not only both of those shows, but also Squidly Diddly, The New Adventures of Huckleberry Finn, and others.
Posted by Jon K at 12:01 AM