Ape of the Geek: Bingo! 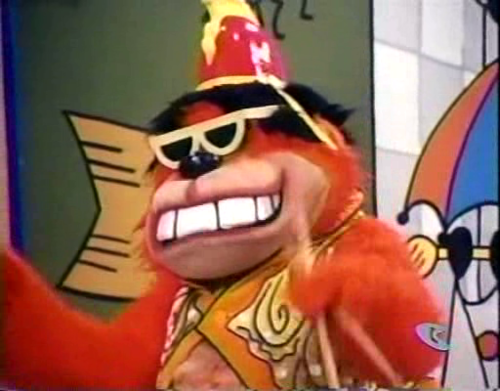 Other Appearances: Adventures of the Splits were published in a Gold Key comic book series, and there was also an animated Saturday Superstar Movie special "The Banana Splits in Hocus-Pocus Park." In August, 2008, Bingo and his fellow Splits were revived.

Merchandising: Bingo, as well as his fellow Banana Splits, appeared in all sorts of merchandise, including of course records, posters, an extremely hard-to-find View-Master set, and much more.

Biography: Nobody really knows how the Banana Splits were formed, nor how a gorilla was able to learn how to play the drums. This is a rock-and-roll mystery right up there with how the TV show version of the Monkees formed. Legends abound that Bingo is somehow related to Magilla Gorilla, which accounts for his ability to speak, but since Magilla was animated and Bingo was live-action, this seems unlikely unless Bingo had burst through the dimensional portal seen in the Saturday Superstar Movie special "Porky Pig and Daffy Duck Meet the Groovie Goolies," which showed that there was a way for animated characters to cross over to the "real world." Could it be that Bingo, Drooper, Fleagle and Snorky originally came from the animated universe and crossed over? Or were they refugees from a magical island where everything seems to be alive and intelligent, possibly ruled over by a dragon wearing cowboy boots who's menaced by a kooky witch? We will likely never know who gave the Splits their training in music, as well as how their groovy pad was acquired, or where the rivalry with the Sour Grape Bunch began.

Powers: Bingo's only powers that aren't matched by his fellow gorillas are his ability to speak and sing in English, play the drums, and operate motorized vehicles. He's obviously very intelligent.

Miscellaneous: Yes, all the biographical stuff I've provided up there was just filler I made up to make this more substantial! Deal with it. In the costume was Terence H. Winkless, billed as Terence Henry, and brother to Jeff and Dan Winkless, who portrayed Fleagle and Drooper respectively. His voice was provided by Daws Butler on the original show, and Frank Welker in the revival.