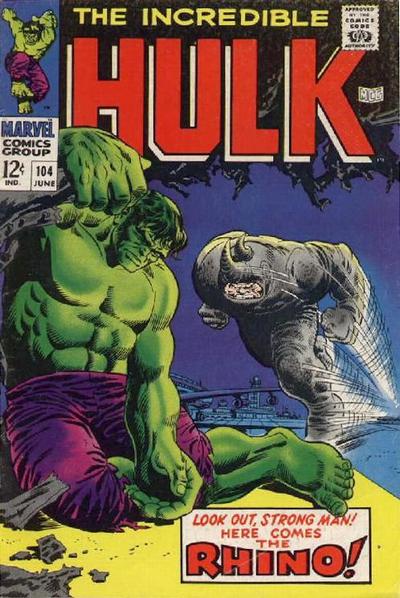 Title: "Ring Around the Rhino!"

Plot: When last we saw the Hulk, he had defeated the Space Parasite, but after the fracas, he had been gassed by the police and turned back into Bruce Banner! The issue opens with the front page of the Daily Bugle with the headline "Hulk Captured! Held prisoner at Sing Sing!" In his cell, Bruce ponders his future as a prisoner when Ross and Talbot come to speak with him. Bruce tells them he has an idea that will cure him of the Hulk, but he needs to be taken to his lab. They refuse, and when Bruce starts to get excited, they have him injected with a sedative to prevent his changing into the Hulk.

In the meantime, we see the Rhino, having just recently been released from prison, and he's been approached by Igor and Georgi, the men who made him into the Rhino. They offered the ex-con money to become the Rhino again, but this time with a more powerful suit as well as enhanced strength (partly from the suit, partly from added gamma-ray exposure). The Rhino's mission: Defeat the Hulk! And he feels up to it!

Back in Bruce's cell, images of the Hulk haunt Banner's nightmares. While he's sedated, Ross is having him transferred to a high-security prison. Betty begs her father to let her accompany them to the airport, and he grudgingly agrees. Meanwhile, Rich Jones watches all this on his television, and considers going to the airport to see Bruce one last time, and possibly ask his forgiveness.

At Igor and Georgi's lab, they've also been watching, and they tell the Rhino that it's really Banner they want, as their organization could use his knowledge of gamma rays. They warn the Rhino before he goes that if he tries to turn on them as he did the last time, they'll use a self-destruct device in the suit to make him regret it! The Rhino smashes through a wall and starts on his way.

Over at the Long Island Expressway, the convoy transporting Bruce is only a few miles away from JFK Airport when the Rhino shows up, butting the armored vehicle with his horn. The guards try to stop the Rhino, but their bullets bounce off the Rhino's new hide! The Rhino tears open the passenger compartment to get at Banner, who's bound.

Meanwhile, as Rick Jones drives to the scene, he hears a report on the Rhino's attack on the radio (amazing media coverage in the Marvel Universe, isn't it?). At the airport, a helicopter flies in to help the Rhino escape with his captives... not only Bruce, but Betty as well! When he boards the copter, he complains about its arrival, as he promised he'd manage by himself, but perhaps they had a better plan, as they brought chloroform to knock Bruce out. However, as they try to knock Bruce out, Rick slams his car into the copter, sending one of the scientists flying out the open door just as it takes off. The resulting situation causes Bruce to lose control, and he turns into the Hulk!

When the Rhino sees the transformation has happened, he drops the Hulk out of the copter, but Greenskin had already spotted Betty, so he spins in midair and grabs hold of the side of the door, then he climbs up and breaks the propellers, forcing it to land with him under it to cushion the fall. But as he drops, the Hulk starts to get dizzy (probably an aftereffect of the chloroform), making him an easy target for the Rhino when they land!

The Rhino starts beating on the Hulk, but the Hulk suddenly recovers and strikes back, sending the rhino flying into an airplane. Then the Hulk turns his attention to the copter to rescue Betty! The Rhino decides it's best to leave as the Hulk rescues Betty. He picks Betty up and jumps to the top of a tower, where he places her for her safety before jumping back to the ground.

On the ground, he lands near the Rhino, saying the Rhino is scared of him. This makes the Rhino change his mind about leaving, and the two clash! While the Rhino is able to get up after the first two hits, he doesn't fare so well when the Hulk smashes a truck on the Rhino, which bursts into flames from the explosive jet fuel it carried. The Hulk grabs the burning Rhino and leaps into nearby Jamaica Bay to put out the fire and drags him back to shore. Even though the Hulk's saved the Rhino's life, the Rhino is far from grateful! Despite his injuries and exhaustion, the Rhino still wants to fight, and then he insults the Hulk by calling him an animal!

Back at the tower, airport workers have recovered Betty, who fainted. The Hulk arrives to see her reunited with her father, and demands that Ross give Betty back to him. Betty begs the Hulk to leave, but the Hulk assumes that Ross has forced her to say this, so he jumps down, picks Betty up, and rushes away.

Notes: This issue definitely delivered on all fronts, didn't it? An epic clash, the Hulk escaping with Betty, etc. Of course, we know by now that the Rhino didn't die from his injuries (let's face it, a paramedic the Hulk isn't!). The two would clash again in the future (including a battle that the Abomination would join, having teamed with the Rhino -- this issue would be adapted into a Power Records Book & Record set).