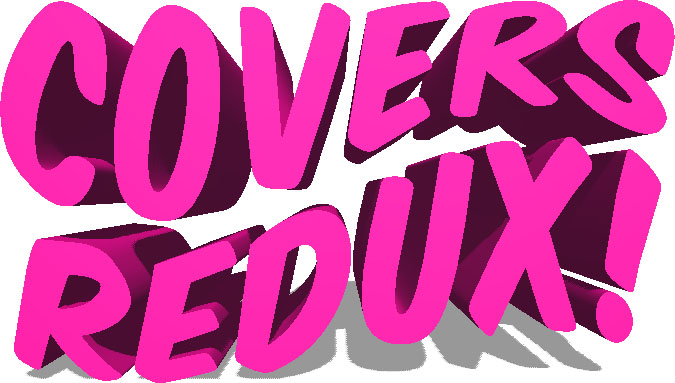 Continuing with the theme weeks, although I'm not sure if I've got enough of these left in my files to last the week! We'll have to wait and see... 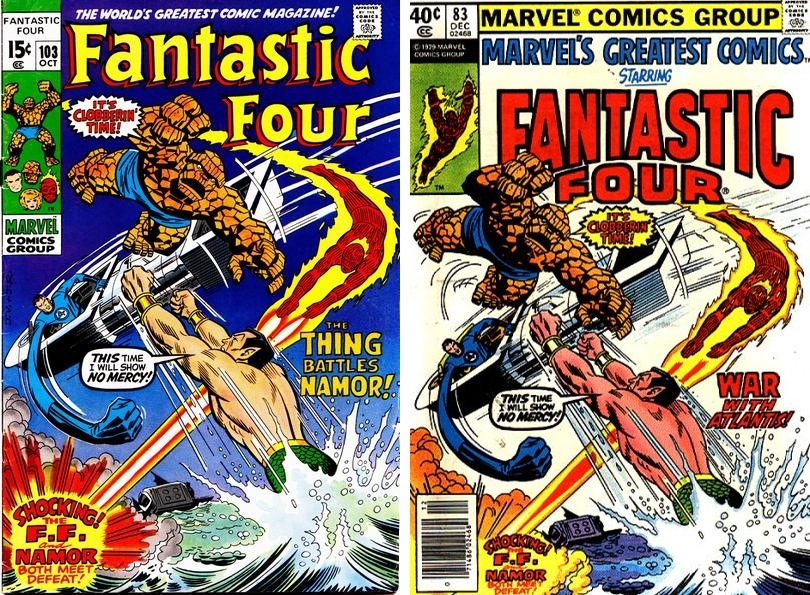 Our first selection today is Fantastic Four #103 compared to the reprinted version from Marvel's Greatest Comics #83. Obviously, the image has been reduced slightly and shifted down. Not only that, there's some changes in word balloon placement. The impact point for the Torch's flame blast seems to be slightly different to accommodate the UPC code, too. In addition, motion lines were added near the Thing's foot! 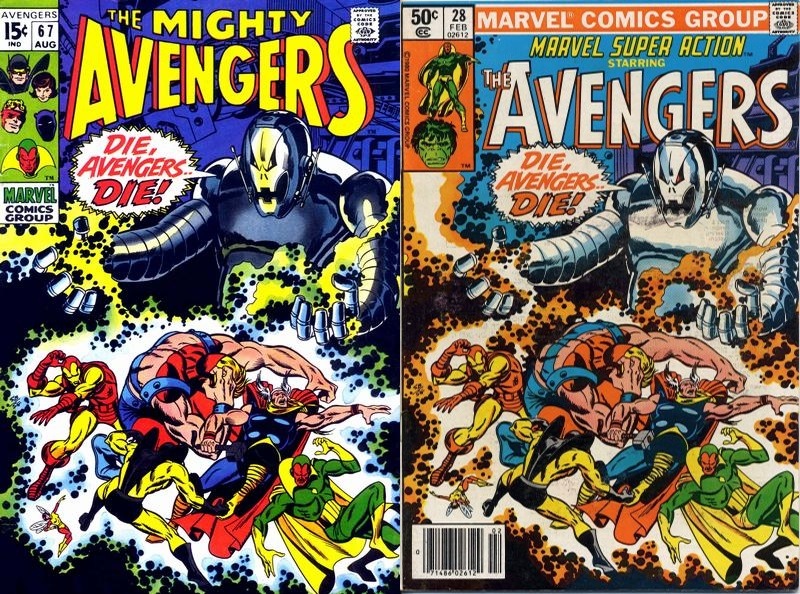 Next, we have Avengers #67 and the reprint from Marvel Super Action #28. The entire image has been slightly reduced and shifted upwards. It also looks to me as if the Avengers in the energy burst have been moved up slightly closer to Ultron's hand. 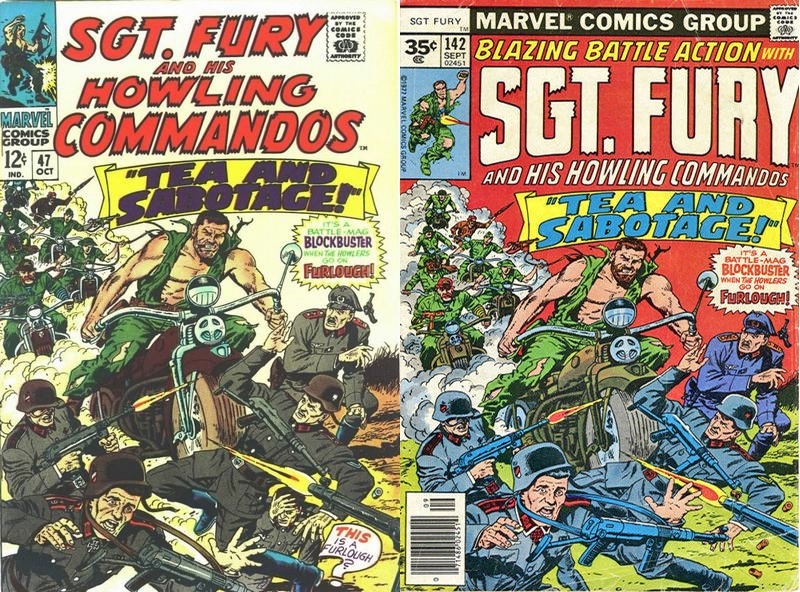 Here's Sgt. Fury #57 and #142. Aside from the altered coloring, it looks like the image was reduced and shifted to the right, with a little extra art needed on the left side. Note that the question mark-shaped burst on the bottom has been dropped! 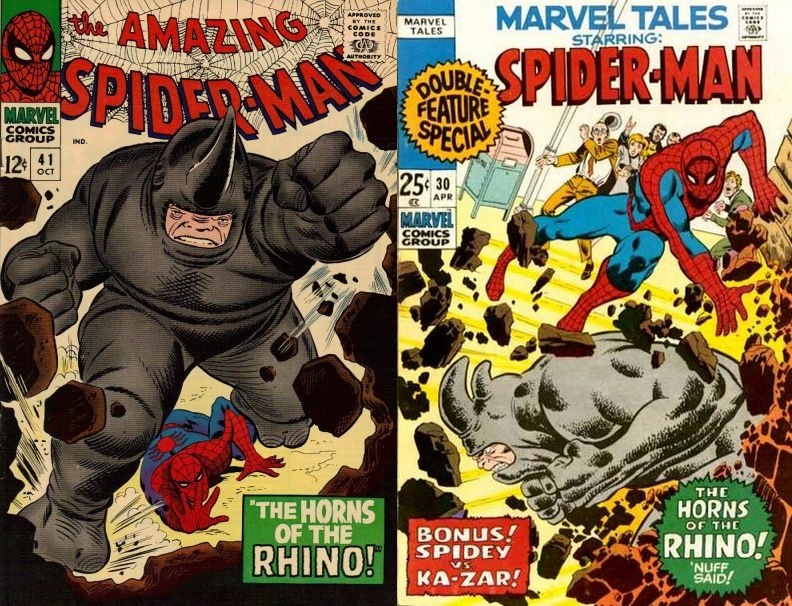 Here's Amazing Spider-Man #41 and the reprint from Marvel Tales #30. In this instance, there's an all-new cover done, this one by Marie Severin and Sal Buscema, although it's clearly not their best work. The Spidey figure on the new cover is oddly awkward to my eye! I can only imagine that one of two reasons for the new cover were given: Either 1) they wanted a more prominent Spidey figure on the reprint, or 2) they couldn't find a good stat of the original cover. As much as I like Marie and Sal's work, I definitely prefer the original cover! 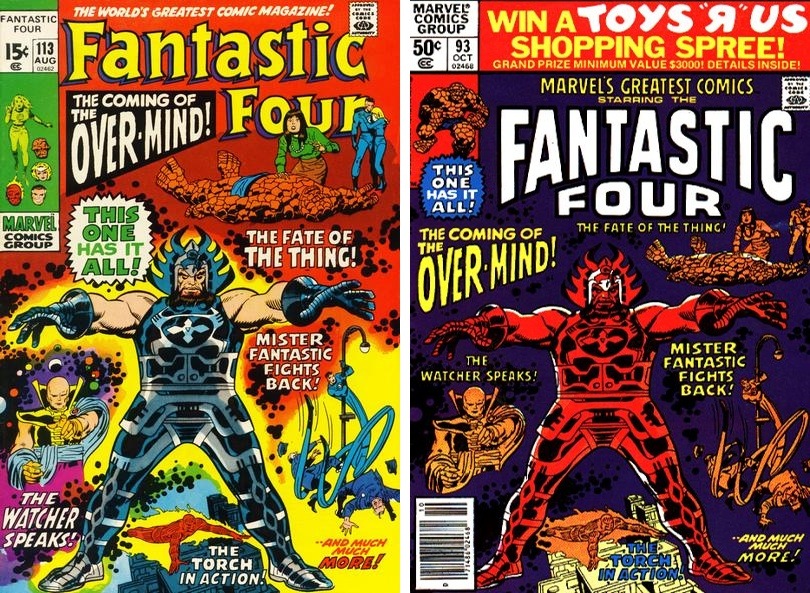 Here we have Fantastic Four #113 and the reprint from Marvel's Greatest Comics #83. There as a lot of cut and paste action here! The whole thing's been reduced, and the captions are moved or deleted, and in the case of the Watcher's blurb, it's completely redone! The Thing's spotlight has been reduced even more and shifted around. I'd imagine we can blame the Toys R Us banner at the top creating this situation. The new coloring doesn't work for me at all. 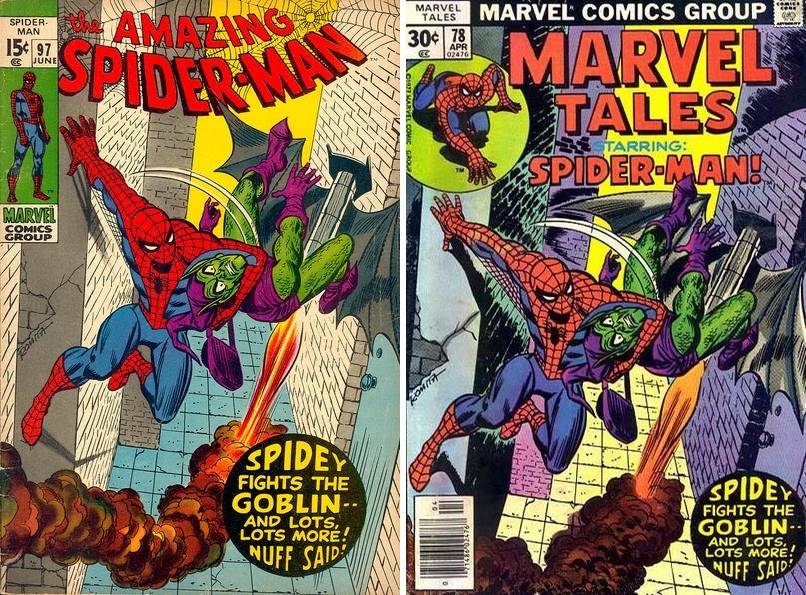 We wrap up today's installment with Amazing Spider-Man #97 and the reprint from Marvel Tales 378. I'm not sure why the original art got altered here, with new shading added. The whole thing's slightly enlarged (unusual in and of itself) and shifted down a bit (thanks to the logo taking up more space than the original).

More tomorrow, and if you spot anything I missed, please let me know in the comments!
Posted by Jon K at 12:01 AM