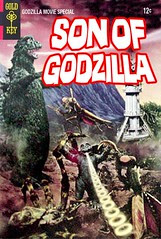 godzilla7
Originally uploaded by waffyjon.
OK, personally, I think this was the best-looking of Gold Key's Godzilla Movie Special Covers. They must've been lucky to get such a good still from the movie, showing not only Godzilla and Minya, but also some of the Gimantises! Also note how Godzilla's breath actually works with the logo, which definitely pops out! And strangely enough, they didn't cover any of the photo with superfluous copy!

This is the last of the Godzilla Movie Specials that I've "found"!
Posted by Jon K at 9:40 AM No comments: 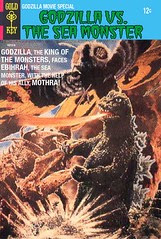 godzilla6
Originally uploaded by waffyjon.
This issue in the Gold Key line must have caused at least some confusion... for some reason, neither Dell nor Gold Key did an adaptation of Godzilla Vs. The Thing, which introduced Mothra into Godzilla's universe (although she first appeared in her own movie). Of course, there weren't any explanations given for Mothra other than what was in the original movie!

One has to wonder if the writer and artist of this issue were a bit resentful at the idea of having to do a story in which, let's face it, Godzilla fights a giant crab! There are a few puns made in the captions (rather weak ones at that -- such as "Ebirah gets crabby about Godzilla's attack!" and the like -- and we thought "Suffering Shad!" was lame! Also Ebihrah's name was spelled inconsistently through the book... sometimes with the extra h, sometimes without -- apparently it took some time before the American name of the giant crab was finalized).
Posted by Jon K at 9:36 AM No comments: 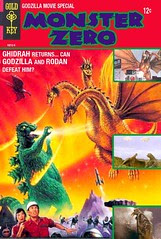 godzilla5
Originally uploaded by waffyjon.
This issue in the Gold Key series is a bit closer to what we've come to expect from Gold Key... note the text, definitely not from a poster!

The majority of the cover art came from what was apparently planned to be a full-color movie poster, but which wasn't used then (it was later used on a video release cover, though!). Note also the insets of scenes from the movie! We'll see more of these in subsequent issues.

The same artist seems to be handling this issue as did the previous one, and the familiarity with the monsters Godzilla, Rodan and Ghidorah (spelled as "Ghidra" in the book, as was the "official" spelling at the time for the US) definitely shows.
Posted by Jon K at 9:35 AM No comments:

So, after staying away from eBay for years, I recently started buying from the site again.

Most of what I've received so far as been for my girlfriend Jessi, who as I've noted before, is a huge "Friends" fan. So far, I've bought her a Friends Trivia Game, a Crystal Duck (if you know "Friends," you know the significance of that), and the Friends Party Pack (which just arrived today, and which I haven't given to Jessi yet).

For me, I've purchased a remote control Mach V from Speed Racer (which I have received), and I'm waiting patiently for a Charlie McCarthy ventriloquist dummy, a collar and leash for Krypto (do you know how hard it is to find a yellow dog collar in Olympia?), The Essential Showcase, and a Justice League Unlimited Atom action figure.

OK, so I'm not *that* patient! I was hoping Charlie would arrive today... but there's always tomorrow, right?

This 'n That II

As I mentioned before, I don't watch a whole lot of current TV shows... especially shows that aren't based on comics! But there is one sitcom that I really enjoy, week in and week out... "Committed." It's on at a really bad time... 9:30 pm Tuesday night.

If you haven't seen it, it's sort of a modern love story about Nate (the latest in a long line of geniuses who excel in their chosen fields... and then usually go insane. To forstall this, Nate isn't involved in any scientific field, or anything like that, but instead runs a used record store) and Marni (who's simply adorable, and has an interesting perspective on everything... similar in many ways to Dharma, from "Dharma and Greg"). Other characters on the show are the nanny who lives across the hall from Marni (who's Marni's best friend, although they're about as opposite as you can get), Nate's buddy (wow, I'm really blanking on names tonight), a black man who is truly a good friend, but has a tendency to let slip the funniest things imaginable that you wouldn't expect from a guy who looks as potentially scary as he does...

...and then there's the clown who lives in Marni's closet, played by Tom Poston.

Tomorrow (as I write this, probably tonight as any of you read this) is "Smallville," another of my favorite shows to watch.

On to other things... "The Greatest American Hero" has started to be released on DVD, and I've picked up the first volume. Haven't watched any of it yet, haven't even opened the plastic! I have waaaaay too many DVDs I've bought but not watched yet... and a lot of them came from dollar stores, believe it or not!

Yep, you can find DVDs for a buck. It's mostly public domain stuff, cheesy horror movies and the like, but there are some gems... like the DVDs I've found of old Jack Benny TV shows! The quality isn't great, but then, it's probably as good as we're going to get, given the recording technology of the era! 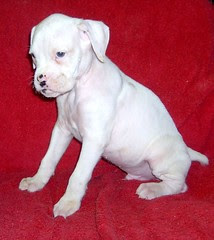 krypto 8 weeks
Originally uploaded by waffyjon.
Here's the latest picture the breeder's sent me of Krypto... just thought I'd share!
Posted by Jon K at 7:45 PM No comments:

Well... what a weekend I've had! Not really exciting, per se, but a full one! As I said in a previous post, I've lost 25 lbs. so far on Weight Watchers, but I haven't mentioned anything else.

Preparations for Krypto's arrival on March 2 are well underway... on Saturday, my girlfriend Jessi and I did all kinds of shopping... I'm now well-stocked on food, training treats, and toys. And then, this morning, I won an eBay auction for the closest collar I could find that looked like the comic-book Krypto's collar (this has two rows of studs, not one, but that's okay). Unfortunately, I think the collar I won will be too big for him for a while, but he'll grow, you know? I guess I'll have to get a smaller collar for him to use until he's bigger.

Krypto's dogtag will be ready on Wednesday... I bought some of these Superman "s-shield" keychains, and then borrowed a friend's Dremel tool to grind off the raised lettering on the back so there'd be a nice smooth surface to engrave his name, my name, and my phone number on it (in case he gets lost, you know). I actually have three of them being done... I like to plan ahead, and if he loses one dogtag, I want to have back-ups (I'm glad I bought three of them, because I can't find them anymore!).

I also spent part of this weekend "puppy-proofing" the apartment, which also meant doing a lot of reorgnizing, especially on my bookshelves! This gave me an excuse to put all my "Justice League Unlimited" figures on the same shelves... and since I've only got one three-pack left to go (the one with Starman on it), plus the Atom figure that's not part of a three-pack, I figured it was time. I also have a very cool Mach 5 (from Speed Racer) RC car on those shelves, as well as a full set of Beatles animated figures, and much more! One of these days, I'll take a few pics of my collection to share with you.

Other recent eBay purchases include the Friends DVD Party Pack. I think I mentioned before that Jessi is a huge Friends fan, and I'd been trying to get this for her for a while, but kept getting outbid at the last minute. I knew, though, that if I was patient, enough of those kept coming up that I'd win one at the price I wanted to pay, sooner or later!

Another recent item was a Charlie McCarthy ventriloquist dummy. This is something I'd been trying to get for a good price for well over two years now! I'm hoping that arrives today or tomorrow... I still have to figure out where I'll display him!

I'm also currently bidding on a JLU Atom figure, as well as a copy of THE ESSENTIAL SHOWCASE, which was one of those books I had to sell when I was out of work! I may not be lucky enough to win it this time, but I have saved searches to alert me if more copies become available. Other books I need to replace will likely get very pricey! 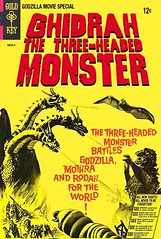 godzilla4
Originally uploaded by waffyjon.
With a new publisher of the Godzilla adaptations comes other changes, such as the cover price, and the renaming of the title as "Godzilla Movie Special."

As with the Dell series, the numbering is consistent with what's been done before, and the cover art is from one of the movie posters. The art is a notch better than we'd seen in the Dell issues, and one suspects that Gold Key had a much better relationship with Toho (at least at this time) than Dell did! 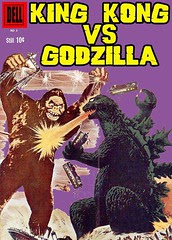 An interesting note about this: Kong only looks like his Japanese counterpart on the cover... apparently the interior artist had a hard time drawing a bad gorilla suit, so Kong looks much more like his classic RKO self!

Another interesting note is that this issue may have prompted the rumors that there were two versions of the movie, one for the US where Kong wins, and one for Japan where Godzilla wins (the reality is, it's basically a draw in the movie in every version), because the last page of this seems to indicate Kong was the winner!

This was Dell's last issue in the Godzilla series before Gold Key took over the line... my guess is Toho didn't care for the alteration in the look of Kong!

As I've mentioned before, I'm on Weight Watchers, and have been since the first of the year. My girlfriend Jessi and I go to a meeting Saturdays at 8 a.m. Well, yesterday, I went to the meeting, and at weigh-in, I'd lost another 6.6 lbs, bringing my total so far lost to 25 lbs plus! Within the next 2 weeks, I'll have hit my "10%," i.e., 10% of my starting weight lost.

Like I said, this is a great program, and I definitely recommend it to anyone who wants to lose weight!