Ruff, Ruff and Away! 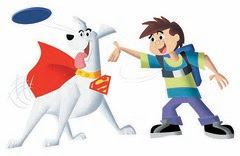 krypto animated 1
Originally uploaded by waffyjon.
Just a brief note here, as I still have almost three hours of He-Man transcripts to do... every morning this week, I've been checking out Cartoon Network's new "Krypto the Superdog" show... and I have to say, I like it! It's good fun, appropriate for ALL ages, not just little kids! So far on the show, we've had Krypto's origin, plus appearances by the Dog Stars (the former Space Canine Patrol Agents) and Streaky the Super-Cat, as well as Superman, Lex Luthor, and in this morning's episode, even a cameo by Lois Lane... plus an apparance of STAR Labs and the Daily Planet building.

So like I said, great fun! I can definitely recommend it. 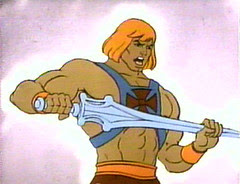 he-man
Originally uploaded by waffyjon.
...but I haven't finished the transcribing job yet! So it'll be another few days at least before I post much more here. Just wanted to keep you informed!