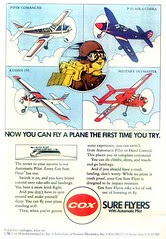 marvel_02_76_01
Originally uploaded by waffyjon.
Not much to say about this one... so I'll just present it without further comment!
Posted by Jon K at 3:33 PM No comments: 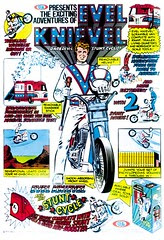 marvel_01_74_03
Originally uploaded by waffyjon.
So here's another ad for the Evil Knievel action figures and accessories, from Ideal...

Now, let's recap... in the 1970s, there were the following action figure toy lines to choose from...

Mego - World's Greatest Super-Heroes, Star Trek, Planet of the Apes, and many, many more

I think those were the main ones... there was also a Lone Ranger toy line, and Marx was in its last gasps with Johnny West and Best of the West, but I think that's about it... anyone remember any others I've forgotten?

marvel_01_74_02
Originally uploaded by waffyjon.
Here's a house ad for Savage Tales... and if Conan is your thing, you can't go wrong by picking up the latest issue of BACK ISSUE, from editor Michael Eury and Tomorrows Publishing! There's an extensive article on Conan in there, but even if you're not into the barbarian, there's lots more good stuff in that issue, too... such as interviews with Mark Evanier and Sergio Aragones on Groo, the story behind the artists on SUPERMAN VS. SPIDER-MAN, the untold tale of DC's aborted KING ARTHUR books, and much more!

marvel_01_74_01
Originally uploaded by waffyjon.
Here's FOOM... the Friends Of Ol' Marvel! I think this was the first official ad for FOOM, and I always wished that I had joined it when it was first formed (then again, I've felt the same way about the previous clubs offered by DC and Marvel, too!). 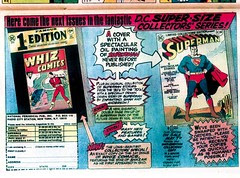 dc_09_74_04
Originally uploaded by waffyjon.
Another house ad for tabloid editions... sure were a lot of them, weren't there? 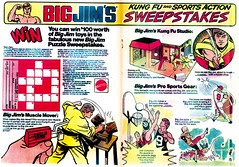 dc_09_74_03
Originally uploaded by waffyjon.
So... posting a few more comics ads tonight, and in the next day or two, I'll break up these with the comics mini-reviews (which I'm crossposting to the comics boards at Olympic Cards & Comics, by the way).

So... Big Jim! Mattel came up with Big Jim to compete with GI Joe, and like GI Joe, the concept took a turn towards the end. He began, as you can see here, as a sports star/adventurer type... but later on, he became more of a superhero!

Big Jim was actually a very well-designed action figure... his muscles were positively Kirbyesque, and there was a mechanism built in to at least one of his arms, so that if you bent it at the elbow, the bicep would actually flex! There was also an action button on his back that, when you pressed it, would make his arm move (you can see it in action here).

Big Jim had some initial success... but unfortunately, he didn't really last all that long... and I don't think that we'll see Mattel bringing him back at all.

I wonder if things would've been different had Mattel took Big Jim in a more sci-fi direction...?

That Story I Promised You Guys...

OK... quite some time ago, I had alluded to a story about a place called Warehouse Toys, and promised to tell you guys that story some day.

Today, my friends, is that day.

It was probably the summer of 1981... sometime in 1981, anyway. I think I was out of high school, but hadn't started voc-tech school yet (long story there... short version is, I was going to be a computer programmer, but I found it more boring than watching paint dry)... out in Lakewood (which is just south of Tacoma, right along I-5, pretty much across I-5 from McChord Air Force Base), there used to be pretty much one store I was interested in, O'Leary's Books -- the first comics shop I ever went to, and now gone... but I digress.

Across the street from the last location of O'Leary's (but not at the same time O'Leary's was there) was, for a very short time... a store called Warehouse Toys. One day, my brothers Jeff and Karl joined me for a trip over there... we'd heard about it, but hadn't gone there for ourselves.

Needless to say, I didn't buy a thing then.

If I had any clue as to what would happen with the toy market between then and now, and I had the money... I would have bought all the Megos and Joes and probably a bunch of other stuff I don't recall now... and I would've been set financially!

Email ThisBlogThis!Share to TwitterShare to FacebookShare to Pinterest
Labels: About Me, toys 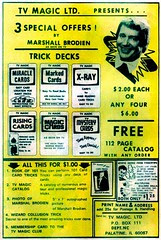 dc_09_74_02
Originally uploaded by waffyjon.
Here's another full-page ad for magic tricks... anyone recognize this magician, who's supposed to have been famous? 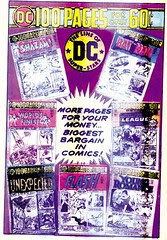 dc_09_74_01
Originally uploaded by waffyjon.
Have I mentioned before how much I loved DC's 100-Page Super-Specs as a kid?

Have I mentioned how much I love them today... except for the prices one has to pay to find them? 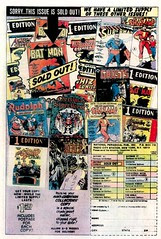 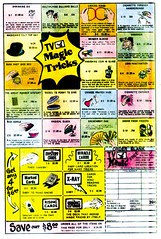 dc_08_75_04
Originally uploaded by waffyjon.
It's time for TV Magic Tricks! Or at least, that's what this advertiser thought, anyway. Magic tricks never seemed to sell that well through comics... at least, not by themselves, anyway... 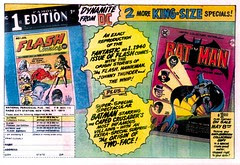 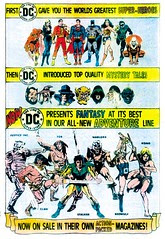 dc_08_75_02
Originally uploaded by waffyjon.
Another house ad here... that for some reason, I think I've posted this before... it was the DC Explosion... and naturally, the Implosion was just around the corner! 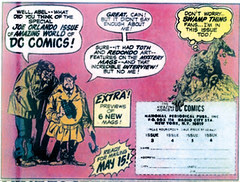 dc_08_75_01
Originally uploaded by waffyjon.
Here's another Amazing World of DC Comics house ad... one of these days, I should really get these ads organized somewhere else, so all the AWoDC ads could be together, eh? 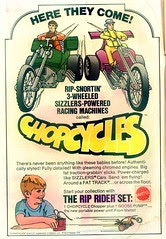 dc_08_72_01
Originally uploaded by waffyjon.
OK, if my prose were truly deathless, you'd all remember that I talked about Sizzlers awhile back... basically powered Hot Wheels cars that could be charged up and then let go!

Well, here's the Chopcycles, which were kind of a spin-off of the whole Sizzlers thing (see, I'm not just making this stuff up, you know... well, except when I'm just coming up with ridiculous theories).

It does seem like I'm having a difficult time posting daily these days, doesn't it?

Life is interesting these days for me and mine... Krypto seems to be getting bigger by the day... Jessi and I keep watching more and more Law and Order on TNT and USA (maybe if we weren't watching so often, we'd get some other things done around here, eh?).

Going to be an interesting few days between now and payday (which is Thursday). I spent the last of my available funds getting dog food, and the last soda was drunk by Jessi while I was at work (Jessi was home sick today). So, the only caffeine I'll be getting for the next few days will be if I make iced mochas (which are kind of hard to bring to work with me).

Work is going well, as it usually is. What can I say? I love my job! It's always a joy to go to, and the more there is to do, the happier I am! One of my extra assignments is doing flyers for the circulation department's sponsored newspaper program, and today, I got a frappucino in gratitude (which frankly, really hit the spot!).

Anyway... aside from Jessi not feeling well today, there's not much to mention!