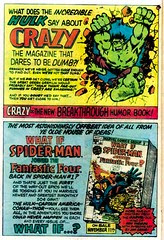 marvel_02_77_05
Originally uploaded by waffyjon.
OK, last post of the night (which means it'll be the first post you see)...

So... no Crazy website that I could find worth sending you to.... and frankly, I'm too tired to search for a What If--? page... so just enjoy the ads! 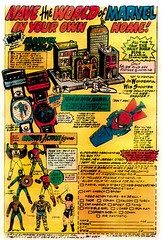 marvel_02_77_04
Originally uploaded by waffyjon.
OK, no links to go with this post... but I'll talk about it from the bottom up!

Of course, at the bottom, we have some Marvel Megos (oh, what the heck, go to the Mego Museum to get up to speed on Megos)... and then above that, Marvel wristwatch radios, pretty cool, but not as cool as real Marvel watches could've been (imagine a Spider-Man watch where the face is looking straight down on a NYC cityscape, and a second hand which looks like Spidey swinging on a web from the center building)!

Then there's the web shooter... well, one of 'em, anyway. This was basically a sticker gun that you wrap around your wrist! There was also a squirt gun version that was a full glove (I may have even posted an ad for this version)... of course, these days, there's one that shoots silly string, but they haven't managed to make them look decent, have they?

OK, finally, at the top of the ad, it's Marvel World! Now, this is an item that I had when it first came out, and it was pretty cool... it looked just like you see here... it was printed on heavy card stock, and you assembled the buildings yourself, and populated the city with small cardboard standees of heroes and villains! The backside of the buidings was open, so you could play with it...

I don't know that there was a DC World version, but I think there were some other playsets like this for other things, too (a Planet of the Apes set would seem a natural, eh?). 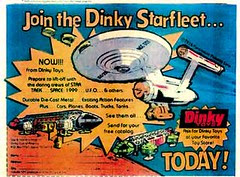 marvel_02_77_03
Originally uploaded by waffyjon.
You know, one of these days, I really need to index what ads I've posted, and what ads I haven't... because I'm not sure if I've shared this one before or not!

Anyway... from Dinky Toys, here's the USS Enterprise and a couple of Eagle Transporters from Space:1999!

These came out during the height of my interest in Star Trek, and I really, really wanted one of those Enterprise vehicles (not as much as I wanted a Corgi Batmobile or Yellow Submarine in later years, but I digress). 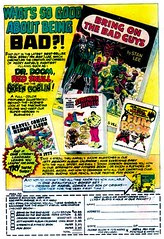 marvel_02_77_02
Originally uploaded by waffyjon.
OK, going to try to get a few blog entries in tonight, but then I'll be away for a few days, except for an entry here or there, as I have another freelance job to work on! 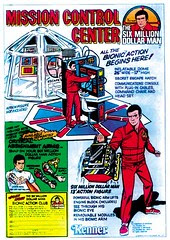 marvel_02_77_01
Originally uploaded by waffyjon.
So, I think this is the first ad I may have posted for the Six Million Dollar Man action figure... or maybe it's the second.

Anyway... as I've mentioned before, this was a fairly hot toy line for a while... in fact, it was so popular that competitor Hasbro even came up with their own cyborg character to join the GI Joe Adventure Team, named Mike Power, the Atomic Man!

But of course, you're wondering if I came across any good Six Million Dollar Man toy pages... and yep, I did! The best one is probably Bug Eyed Monster's page, which is loaded with photos!

As for my own personal memories of this figure? Well, as a kid, I didn't have one of these... I had Megos and GI Joes, but no Steve Austin (no Evel Knievel, either)... my brother Jeff, however, had both of those.

I remember he got his from a Kmart, and when he took the toy out of the box, he tried to make him lift the engine block that came with the original action figure by pressing the button on the back. However, it didn't work, so my parents returned it and got another one. While they were gone, I happened to find the instructions (Jeff used to always have a problem even trying to look at the instructions for anything), which said in order to make it work, you had to turn Steve Austin's head to the right! Needless to say, the second one worked much better when those instructions were followed.

Now, much later... flash forward to about 10-12 years. I was making extra money by buying and selling comics and collectible toys, and I came across a few good deals... I had two or three Steve Austin figures, only one of which had the jogging suit... and not long after that, I made a deal that netted me a few of his mission outfits, mint in the package. So, I was selling stuff at a toy show not long after that, and none of these were selling... so I got the brilliant idea of taking a naked Steve Austin and putting him in the astronaut suit (selling them for the same price I was selling them for separately). It sold an hour later.

Other figures in this line included Maskatron (a bad guy who could disguise himself), Bigfoot, Oscar Goldman, the Bionic Woman, and a Fembot! 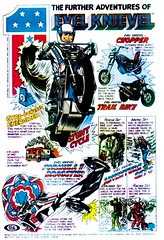 marvel_02_76_05
Originally uploaded by waffyjon.
Here's another Evel Knievel ad... and as much as I've searched, I have yet to find a decent web page that provides much information about this toy line! There was one site I was hoping would be worth linking to... but unfortunately, it's an Angelfire page (with three pop-ups) and wouldn't load all the way! 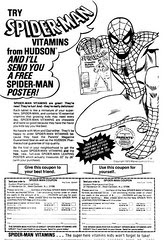 marvel_02_76_04
Originally uploaded by waffyjon.
OK, no matter what I did, I couldn't find a webpage that mentioned these specific Spider-Man vitamins.... there are current ones mentioned galore, but not these!

Anyway... from what I recall, these vitamins were shaped like Spidey's head, with the webbing design and eyes... But I never tried them myself, naturally! 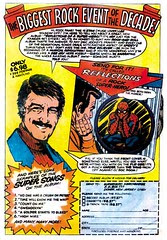 marvel_02_76_03
Originally uploaded by waffyjon.
Now, here's an interesting record... and one that I don't believe I ever had (there was a "rockcomic" Spider-Man album that, at one point, I had two copies of, but I don't think this was that)...

And strangely enough, there's no real info about it on the web, either... but you can check out this link for a page that at least mentions it! 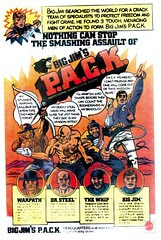 marvel_02_76_02
Originally uploaded by waffyjon.
Going to try to do something different with these posts... at least tonight, and see how it works!

Anyway, here's Big Jim again, and this time he's got the P.A.C.K. with him! This was the second or third iteration for Mattel's action hero... depends on whether or not you consider the original intro of Dr. Steel (as a villain) the second one.

And yes, I know this looks a lot like Jack Kirby art, but when I asked Mark Evanier about it a whole back, he told me Jack did some art for Mattel, some of which was used on packaging, but this wasn't it.

You can read more about Big Jim here... and to check out the comic book one-shot (well, freebie in the package), go here.