Here's another advertisement from DC January, 1969 comics (or, at least, cover-dated that date). Looks like another Schaffenberger art job on this one, but I could be way off (it's happened before).

I don't think I ever played this game, so I don't have anything to say about it!

Here's another house ad I scanned from the same comic:

Angel and the Ape is another one of those wacky Silver Age books that didn't last very long... and you know, when I've been able to afford to buy back issues, one thing that I always get a kick out of is finding cheap copies of these short-lived, wacky books (even if they weren't intended to be that wacky).

So as I write this, I've got 55 items (still) for sale on eBay... you can view my current listings here.

I still find it odd how, when I've got mostly "Buy It Now" items listed, I'll get people adding the items to the watch list. There's a few items with two people watching them right now, and given that pretty much everything's listed at less than half cover price, I'm not sure why they think they might get a better price. But you know, I could be wrong in that assumption.

Yes, I read all about Apple's iPhone... and once our Sprint contract is up, we may switch to Cingular so we can get them (assuming the price has gone down a bit by then).

If you're having a hard time waiting for June, when the iPhone becomes available, check out this entry from the Gizmodo blog.

So I just finished putting up the last of the TPBs I'd photographed on Wednesday night up on the eBay -- there's a link in the following entry below -- so buy early and often! Of course, I always discount shipping for multiple item purchases.

On Comic Book Resources this morning, there's an interview with Jim Demonakos about this year's Emerald City Comic Con -- and one of the things he mentions is that there might be a Fan/Pro Trivia Challenge this year.

Now, if you're a long-time reader of this blog, you may recall that I debuted the first Fan/Pro Trivia Challenge of the ECCC two years ago, and it was quite popular... and then, at last year's ECCC, Jim forgot to tell the local people running the show to put in a spot for it, so it didn't happen last year.

You know what? This article this morning is the very first time I've heard anything about it returning this year... That's right, I've not been contacted at all about it. Does this mean Jim's found someone else to run the contest? Hell if I know.

Either way, the ECCC is a great show, and I'm hoping to make it there this year.

In other news, starting next month, my hours at work will be temporarily changing... since our night crew is going to be short a person, my boss asked if I'd work a later shift (right now I work a 10am to 7pm shift, it would switch to a 2pm to Midnight shift -- I'll explain that in a minute) so that I could learn what all they do on the night side (which is pagination and outputting film, as well as toning photos). This should last for about three months.

And the reason why the revised shift looks so long is that I'll be able to take a two-hour lunch break to spend some time with Jessi during the week. So, for the time being, once this starts I'll take the bus to work to be there by 2, then at 6, Jessi will pick me up for my dinner break, I'll make dinner for us, and then I'll take her car back to work with me to arrive by 8, and then continue working until midnight.

Odds are, I'll be doing the same thing I've been doing the first four hours of that time, and doing the other stuff in the latter four hours.

I forget where I got this link from originally (probably Pop Culture Now)... but here's a link to a blog entry about an obscure Lois Lane comics strip. Although some of them look familiar to me, like they were pasted together and published in the comics somewhere.

Here's a house ad for a pretty groovy DC Special...

I can't tell you how many times I've seen this ad, but I've never had a copy of this special!!

I've started listing a bunch of stuff on eBay... relisting what hadn't sold from before, and newly listing a bunch of TPBs and the like... you can check out my offerings here -- and there'll be more over the next few days, I'm sure.

Email ThisBlogThis!Share to TwitterShare to FacebookShare to Pinterest
Labels: About Me, Comics Ads, Links 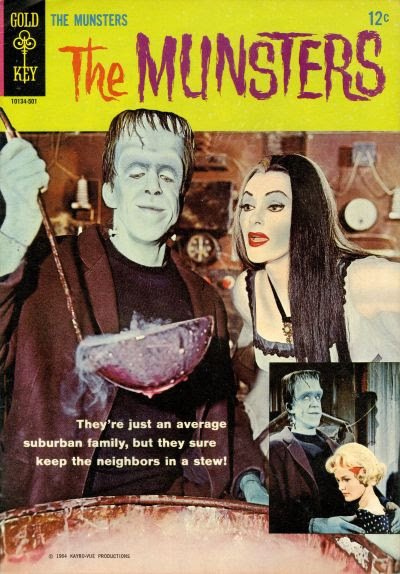 I'm sure most of us know the late Yvonne DeCarlo as Lily Munster, pictured above in the Munsters #1... but I also recall seeing her in The Ten Commandments, and also in some Zorro movie somewhere along the way (and probably in a number of other movies I didn't recognize her in).

And I'm also sure that most of you had already heard the sad news of her passing.

This ad comes from January 1969 DC Comics... yeah, figured I should do some more posts like this again (since I'd scanned some a while back, and just never uploaded 'em to Flickr):

The artwork for this ad sure looks to me like Kurt Schaffenburger, but that's just my best guess. The toy itself, "Super City," was similar to the much later (like late 1970s/early 1980s) "Girder & Panel Construction Set," and I actually had one set of the Super City construction toy about ten years ago or so.

Semi-interesting story behind that. Longtime readers of this blog know I used to run a Champions RPG group before moving to Wisconsin. To help visualize the combat between the villains and heroes, we started buying all the cheap sets of cars (in Hot Wheels/Matchbox scale) we could find... and then I remembered the Girder & Panel Construction Set from when I was a kid, and posted on some website, mailing list, or newsgroup that I was looking for some of these... and I was contacted by someone who said he had a set he'd sell me.

Anyway, after sending the money off and waiting, the package arrived... and it was this Super City set instead! I didn't realize at the time it was scaled to the Motorific stuff, as the ad says.

Strangely enough, about a week or two after I got this Super City set, Toys R Us carried -- for a brief time -- a revival of the Girder & Panel Construction Set, and so we bought a few sets of those for our Champions gaming.

Email ThisBlogThis!Share to TwitterShare to FacebookShare to Pinterest
Labels: About Me, Comics Ads

Knowing which of the last two items I decided to spend money on today: Obvious.

Which, once I've picked it up and brough it back home again, I'll only do MAYBE one more time... to bring it somewhere if I can get any kind of trade-in on it, once we figure out how we'll be able to afford to get me a newer car.

In case you haven't gone there yet...

This week's Cover Stories column is a 1-10 of Nova, one of my favorite comics series!

My Car Is Sick (Again)

Yeah, remember I mentioned having to replace a radiator hose and the battery two weeks ago? Well, this weekend, while we were about 30 miles out of town, the car started acting up again... the engine would just die unexpectedly, then wouldn't restart for several minutes... I have no idea what the heck the problem is, and won't have any idea until Monday at the earliest.

Unfortunately, since nobody does free estinates any more, it's going to cost me at leats $50 to find out what the problem is, and what it'll cost to fix it. Then Jessi and I can figure out if it's worth the cost of making the repairs (and if so, how we're going to pay for them) or if it's not worth the cost (and of not, when and how can we afford to get me another car).

Sometimes life can be such a joy, can't it?

So What Were We Doing 30 Miles Out of Town, Anyway?

Jessi and I were completing our last day of pre-service training for foster parenting, which we had to do down in Centralia (the aforementioned 30 miles out of town location).

We had just gotten on the interstate to head for home when the car completely died on us, so we each made a few calls... Jessi called her friend Tifney to see about getting a ride (since Tifney lives off the next exit north from where we were stopped), while I called my parents (who, thank god, have AAA) to arrange for towing... there was no way I could afford to pay for towing from where we were at!

So it was about 5:00 when the car stopped running, and about 5:30 when Tifney showed up to drive Jessi back to our house (the dogs had been locked up since 8 am, they were going to need to be let out, and I couldn't expect Jessi to wait with me). Since my mom had to be present to use her AAA membership to get the tow done, she (along with my sister and my niece) all came down, arriving at about 6:45 or so. Unfortunately, they couldn't call for the tow until after they got down here, so it ended up being about 7:30 before the tow truck arrived (still a lot earlier than I expected), and by about 8:00 we'd had it towed to the same place who worked on it the last time, and by 8:15 I was back home.

We did, however, decide to tell them about the foster parenting thing, and learned that they've been kind of stockpiling all their old baby/toddler furniture in my parents garage, and they'll be bringing it all down here next weekend!

...at least I'm pretty much over whatever it was I caught last weekend. And there's a bus line that stops at the main street near us that runs right to where I work, so while we figure out the car situation, I can ride the bus to work (no coming home for lunch, obviously).

I'd Love to Make Changes to the Layout...

I've noticed that many of the other blogger blogs I read have customized logos, and I haven't the slightest idea how they do them. I mean, I know how they create the logos, and that they probably have an external link to where they're saved (probably on Flickr or some similar site), but I have no idea where in my template HTML (or whatever it is) that I need to plug in that link. If any of you reading this know how, give me a shout-out and let me know, okay?