...I've got eBay listings ending tonight, and I want to get anything that closes without a sale relisted to take advantage of eBay's one-day 20 cent listing sale (although it usually means there's way too many listings going up at once)...

...so nothing much from me tonight!

If It's Wednesday, This Must Be This 'N That!

Let's see what I have to talk about this evening... 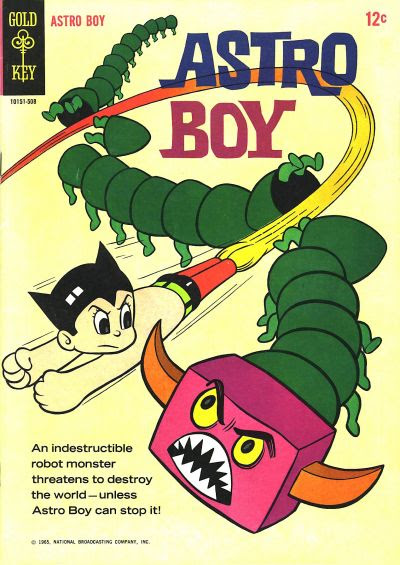 I haven't seen an episode of Astro Boy since I was a wee lad... and I've never owned or read a copy of this single issue of the Gold Key adaptation of it... but I'm guessing that sales of this issue were so low that GK never considered following up with Gigantor, Speed Racer, Kimba the White Lion, or Marine Boy comics!

I suppose it doesn't help that the cover isn't that impressive, does it?

Get this out of the way quickly tonight... another slow day at work, but I kept busy thanks to working on those afore-mentioned articles for the weekly careers tabloid. Of course, since I've had so much time the past three days, I've now got about 80 pages or so of articles for it. I figure if I need 5 1/2 pages a week, I'll be able to just rotate through the articles, and hopefully before I run them all two times, the newspaper will hire a new special features editor, and I won't be dealing with it any longer!

Fortunately, that local parks and recreation book did come in this evening... I collected the photos for it, and sent them for toning before leaving for the day, so it can be the "thing for Jon to do so everyone else will have stuff to do" project.

It may surprise you readers, but I'm not currently reading anything related to comics, except marginally. I'm re-reading the Star Trek: The Next Generation paperback novels I've got. I just finished "Fortune's Light" last night, and started "The Devil's Heart." After that, "Imzadi" is coming up in the rotation!

Why am I re-reading these? Must be because I've been getting back into Star Trek lately, thanks to catching reruns of TNG on Spike and G4, as well as episodes of Voyager and Enterprise (on Sci-Fi), neither of which I watched regularly when they were originally on. Yes, DS9 is also being re-run on one of those channels, but for whatever reason, we aren't recording those on the DVR.

Oh, and yes, we are recording TOS... but just the one ep a week that's shown on the local station.

The latest issue of Alter Ego (which I haven't even started reading) and DVDs from BCI (Prince Valiant Volume 2 and Space Academy: The Complete Series -- looking forward to watching Space Academy the most).

Still waiting for my comp copies of the Dungeons and Dragons, Ark II, and New Adventures of He-Man to arrive... at least, I think those are the only other releases I haven't received yet!

Yes, I've still got stuff for sale on eBay -- see link on the last entry!

I completely forgot when posting last night to mention the passing of Joe Gill, who was one of comics' most prolific writers. Best known for his work at Charlton Comics, where I'm certain he wrote more stories than anyone else, I had the pleasure of transcribing a not-quite-long-enough interview with him for the last issue of Charlton Spotlight. He struck me as someone who enjoyed his work.

Odds 'n Ends is the same as This 'n That! 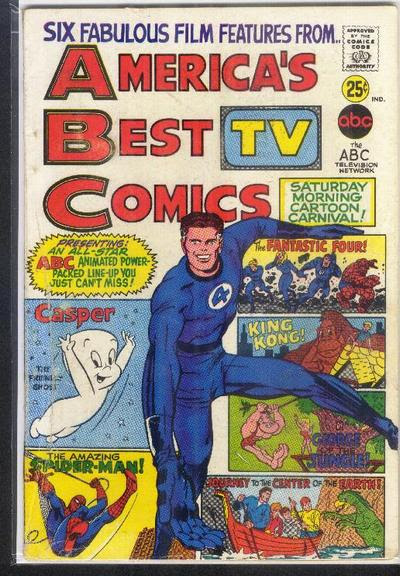 Here's a comic I used to own a copy of quite a while back, and one that's a very unique comic book -- a one-shot designed to promote an entire Saturday morning's line-up, regardless of what studios produced the characters!

The FF and Spidey stories in this giant-sized comic were (from what I recall and have read) are abridged reprints of previous stories from those respective titles... I don't know if the Casper story was a reprint or all-new, but the others (George of the Jungle, King Kong, and Journey to the Center of the Earth) were all created especially for this one-shot!

Marvel produced this one-shot, and of course, Casper was owned (and being published) by Harvey... and later, Gold Key would produce a George of the Jungle comic!

Apparently, there were no comics based on the cartoon Kong or Journey to the Center of the Earth (the latter being one of the early Filmation shows).

The cartoon Kong, in case you're not aware, seems to have been based on the Toho Kong from King Kong Vs. Godzilla and King Kong Escapes -- at least insofar as the arch-foe in this cartoon is a Dr. Who!

So, today my boss officially announced to the rest of the department about my impending temporary shift change, and I think it hasn't quite hit them yet... it's long been acknowledged that I'm the most productive person in the department, and it'll be interesting to see how big a pile of stuff there will be to work on when I start coming in at 2:00.

Today, however, it was so slow that I spent maybe (MAYBE) an hour and a half working on ads, and about half that time was for ads that were a priority -- the other 45 minutes was because everyone else was gone for the day, so I was the only one there to do anything!

The rest of the day? Well, among my temporary assignments on the job (which may be more permanent than I originally expected) is to do layouts for our weekly careers tabloid, and providing the articles for that tabloid. When I took it over, they were only changing content in it every month (yeah, I know, I couldn't believe it either), and since I took it over, I started rotating some old content out, and moving new content in... but yesterday, I started stockpiling articles from the website that's the "home" of the tabloid (yeah, I'm trying to talk around the name of the publication here) and today, started formatting the articles for the tabloid, so that I could put in new content every single week, but not have to wait until the last minute to put it together!

Wednesday should be a bit busier than today was, since one of the local Parks & Rec quarterly brochures will be coming in for me to build.

I Miss New Episodes of My Favorite Shows Every Week

I just felt it had to be said. Still have to wait until Monday for new Heroes, for example!

Email ThisBlogThis!Share to TwitterShare to FacebookShare to Pinterest
Labels: About Me, TV Comics, Work

The Skittle Bowl ad here is also from DC's January, 1969 comics... and I can't quite place the artist's work. Kind of looks like Murphy Anderson, though.

I was kind of surprised to see this particular ad, because I thought at this point, Don Adams (of Get Smart fame) was being featured in the print and television ads for the various Skittle products (not to be confused with the Skittles candy).

Here's another ad from the same comic:

I didn't remember Tyco getting into slot cars, though...

Final ad from the Jan. 1969 issue is this funky house ad for Superboy! 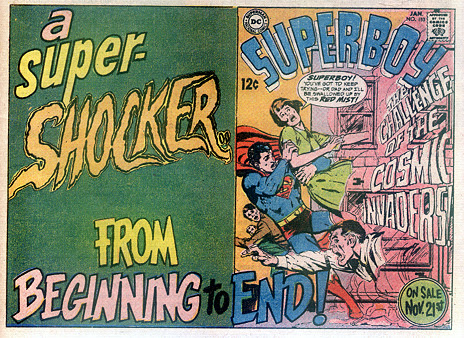