...and we'll see about tomorrow night. I'm kind of taking the weekend off, and trying to get to bed earlier than usual to catch up on some sleep.

To those of you readers who are fathers, Happy Father's Day! And if you're not a father, give yours a call at least!

If you're just dying for something from me, there's 21 posts on my new blog Graphic Samples that will give you an idea of what I do at my job! 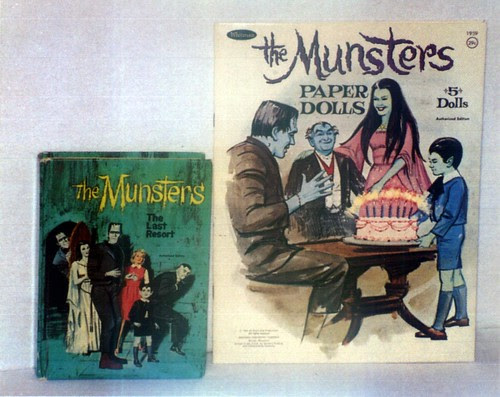 Here's a couple of paper Munsters collectibles... you know, I'd forgotten how popular paper doll licensing was in the 60s and early 70s. It seemed like nearly every TV show popular with kids had a paper doll book out (I specifically remember a "Family Affair" one with Buffy and Jody that one of my sisters had). 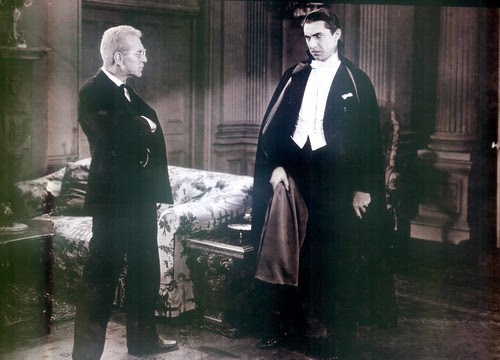 This still of Van Helsing facing off against the Count almost makes me think this photo really needs a Caption Contest! What do you think the two might be saying here? Here's my go:

Van Helsing: "I have here in my pocket a deck of ordinary cards... I'll ask you to pick one of them..."

Dracula: "Card tricks?!? Curse you, Van Helsing! Those are even more deadly to the undead than wooden stakes, sunlight, or crucifixes!"

Yeah, I know, not that funny. 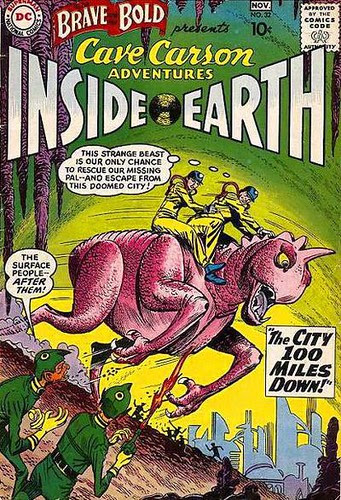 Here's an issue of Brave and the Bold, and as you can see, Cave Carson and crew are definitely catching an unusual ride on this cover!

You know, sometimes I think the Cave Carson concept would've worked much better as a Golden Age comic than it ever could have as a Silver Age book or beyond... I mean, the planet's big, but it isn't *that* big, and I'd imagine that even in the 1960s, readers had a hard time buying into so many subterranean civilizations!

Although you know, it would've been fun, once Warlord got folded in to the rest of the DCU, if Cave and his buddies found their ways into Skartaris. I'm just sayin'.

Doing another three-in-one post this time around, as it's getting late, and I need to get to bed! 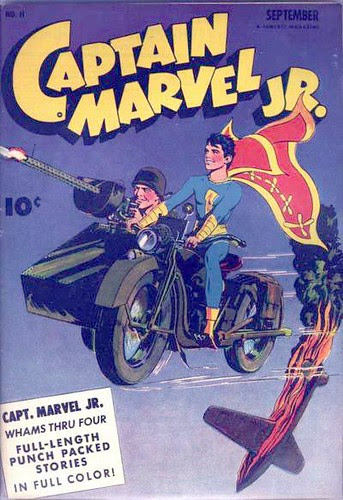 This Captain Marvel Jr. cover is from my "catching a ride" file, and I never noticed until right now that the motorcycle he's driving is actually flying!

Genre Movie Image of the Day! 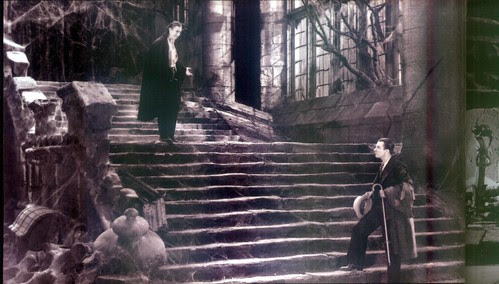 This Dracula still presents the ill-fated Renfield meeting the Count, from early in the film. It's amazing to me how he starts off looking like a rather likeable chap, and once Drac's got him under his power, he looks completely manaical, almost like an entirely different person! I'll attribute that to the actor's skill as well as what's likely Jack Pierce's make-up talents. 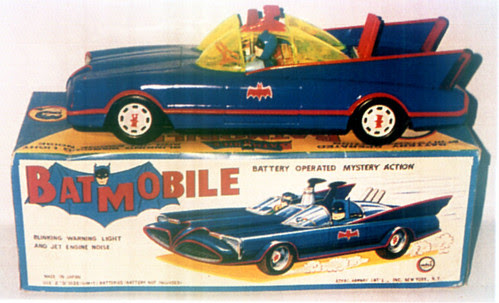 You readers should know by now how much I love the 1960s Batmobile... and this funky-looking edition is but one of the many Batmobile toys produced in the 60s! This is another one of those toys I'd love seeing reissued these days, no matter how much it differs from currently marketed Batman items. 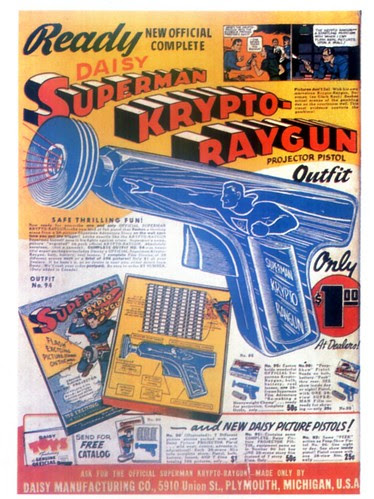 The Krypto-Ray gun is probably one of the most famous Superman toys ever made. One could easily argue that it was a precursor of Kenner's much later Give-A-Show Projector and similar toys!

It's kind of an odd toy, though... a gun that flashes pictures on the wall? 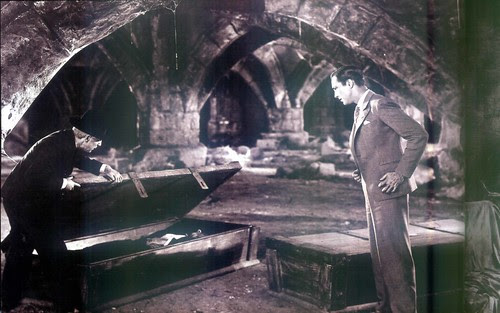 The Count is near his hour of doom in this still, from near the end of "Dracula." That's Professor Van Helsing opening the coffin, with Jonathan Harker standing nearby.

This part of the movie was actually the most disappointing part of this otherwise classic tale... Then again, it's kind of the thing with most vampire movies that they tend to end in one of three ways:

1. The hero finds the coffin during the daytime and plunges the stake into the vampire's heart.

2. The hero somehow keeps the vampire from realizing the sun has come up, so that sunlight vanquishes the creature (alternatively, the vampire's simply caught up in what he's doing and is caught by the sun before he can retreat into his coffin, as in House of Frankenstein).

3. The vampire is impaled almost by accident by a wooden stake, usually something that was already broken during battle with the vampire, such as a table leg or a fencepost.

I never saw Blade, so I don't know which, if any of these, happened there.

So, now I think we're done with "ch-ch-ch-changes," and it's on to a different cover theme... "Catching a Ride!" This is a theme I've covered in "Cover Stories," so some of these covers may be familiar with you if you're a regular reader of that weekly column. 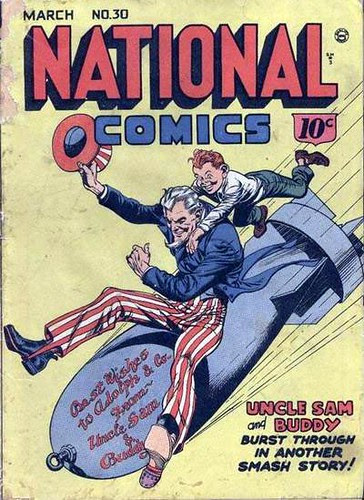 Years before Slim Pickens rode an H-Bomb in "Dr. Strangelove," Uncle Sam and his sidekick did it themselves in the comics! I have no idea how he and his buddy planned to get off the bomb safely before it went BOOM!

Believe it or not, I decided to start a third blog! Yeah, like I've got so much time for the other two.

Anyway, this new blog is my Graphic Samples Blog, and it will be featuring samples of the various advertisments and graphics I've created since becoming a graphic designer.

Not too much there right now, but I'll be adding more as I get the chance! I just figured this would be a good way for me to get my samples out there to be seen.

Email ThisBlogThis!Share to TwitterShare to FacebookShare to Pinterest
Labels: About Me, Links 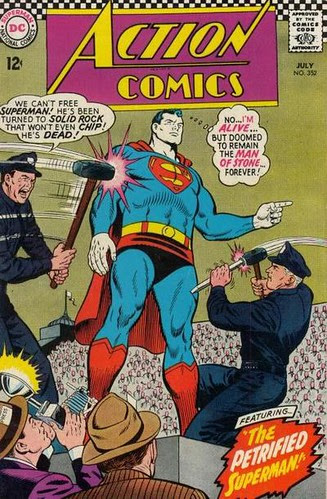 OK, so I'm looking at this cover (from the ch-ch-ch-changes files), where Superman has been transformed into living stone (whatever the heck that's supposed to mean), and there's the Metropolis police department using chisels and hammers on him???

Let me make this public statement here: If I ever happen to be transformed into living stone, I have just three requests...

1) Keep me dusted off while you search for a cure.

2) Keep the pigeons from landing on me and making a mess while you search for a cure.

3) FOR GOD'S SAKE, DON'T TRY TO FIND OUT HOW TOUGH THE STONE I'M COMPRISED OF IS BY HITTING ME WITH A HAMMER OR CHISEL!!!!!

I mean, really... what benefit to that plan is there? "Hey, Sgt. McClusky, I managed to knock off his right arm! Guess that stone wasn't so invulnerable after all!"

Maybe Lois, Jimmy and Lana put them up to it as revenge for all the times Superman tried to "teach them a lesson." 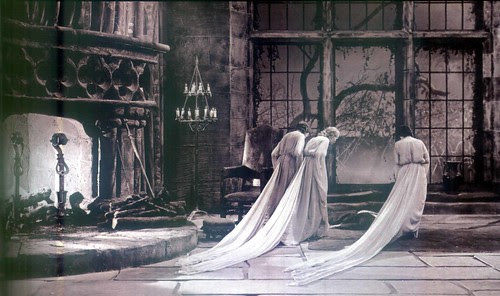 Beware the brides of Dracula, my friends... as they gather around the fallen form of... hmm, is it Johnathan Harker here, or is it Renfield? Probably Harker... and I believe shortly after this still, Professor Van Helsing arrives to drive off the vampiric vamps! 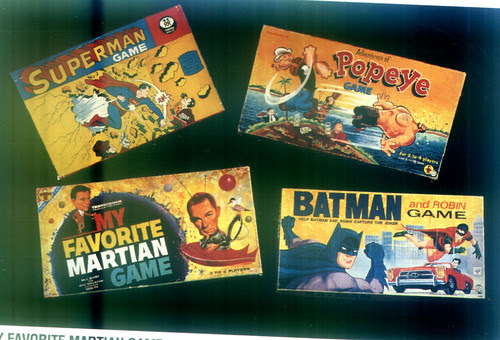 Here's four really cool-looking board games... well, at least the box art looks cool (you never can tell about the game boards).

I'm guessing that the Superman, Popeye and Batman game boxes weren't drawn by people who worked on those features. The Superman game doesn't use the official logo, and I'm guessing the Superman figure was traced from a Curt Swan drawing, with the rest done by whoever did the tracing.

The art on the Popeye box is pretty close... but geez, who decided that Bluto/Brutus would fly off in the direction the art shows? I'd almost guess the figures were traced from existing art, but again, the tracer didn't think about the overall composition.

Nothing to point out about the "My Favorite Martian" game... but look at the Batman box... Robin's costume is colored almost entirely wrong... and doesn't it look like he's flying??? And who's Batman supposed to be swinging his fists at? The Joker's driving towards him from a completely different direction!

OK, this is going to be an all-inclusive post, since I've got some time to get some stuff out here!

It was a very busy weekend -- you can read what Jessi and I wrote about it on the Building Our Family blog... but now I'm making up for the non-posting on Sunday!

Aren't these just so much better-designed and plain cooler than the all-in-one Monkees handpuppet I posted a few days back? I especially like the head sculpts. 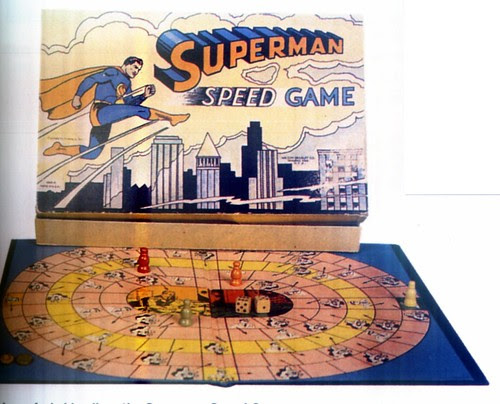 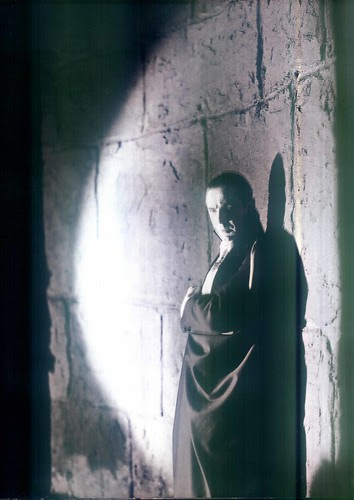 This moody shot of Bela Lugosi as Dracula was probably a publicity photo... 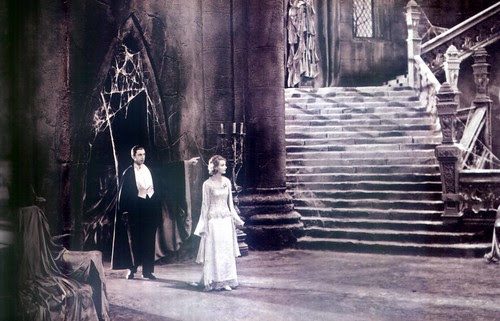 ...but this one I think was a still from the movie itself! Dig all the cobwebs all over the place! 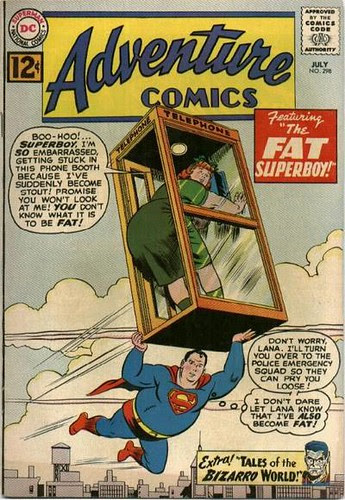 Another "ch-ch-ch-changes" cover here, obviously... but an unusual one, as both Lana AND Superboy have become hefty-hefty-hefty! I remember seeing other covers in which Lois became fat, and one in which Superman got fat all of a sudden (bursting out of the phone book he was changing inside of)... and even some other fat Superboys, but I think this was the only "fat Lana" cover I've seen! 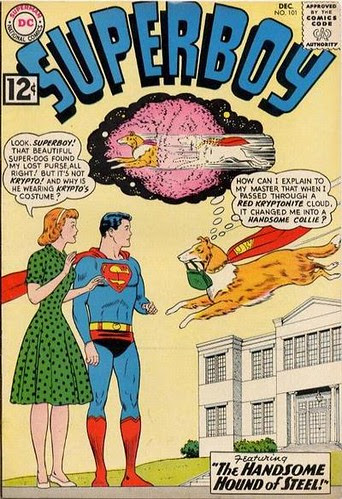 I've never read the cover story here, but I've heard about it... the cover tells you Kryto was transformed into a collie... but it doesn't tell you he becomes a female collie... who has a litter of puppies! Presumably, when the Red K wore off, the puppies disappeared, as they were never heard from again.

Poor Krypto... can't get any respect.