Just because I'm too tired to make three entries tonight... 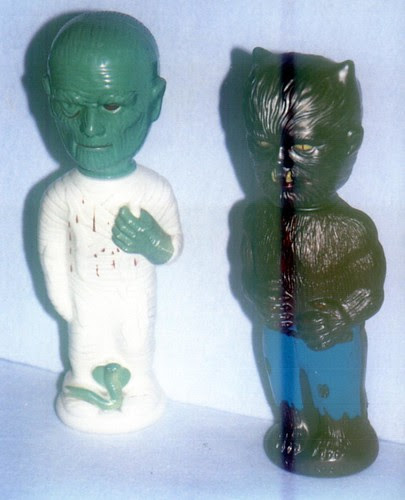 Genre Movie Image of the Day: Curse of the Demon Poster! 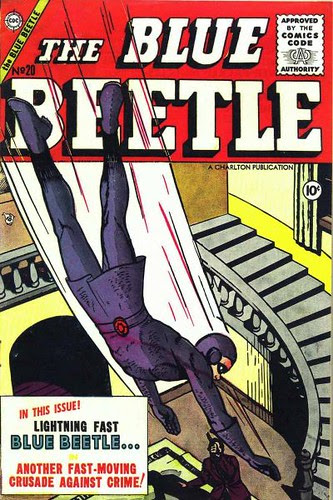 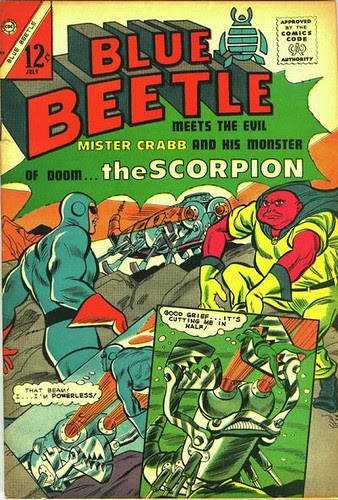 Yes, it's Charlton's take on the Blue Beetle... I suspect this was the second Dan Garrett Beetle, but I could well be wrong! I know that they originally used the first (Fox) Beetle.

Oh, and I've heard about the Electric Company's Blue Beetle, but I don't ever recall seeing an episode with him appearing! 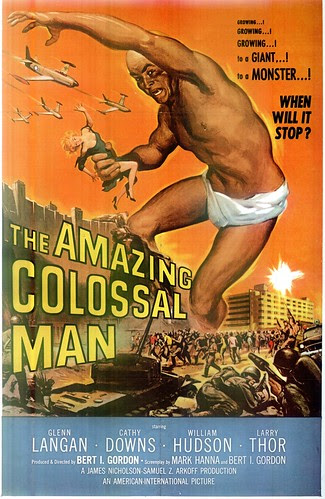 You know, as a kid, I thought this movie was great. Then again, you know how I feel about movies in which things become giant-sized! As an adult, I realize how cheesy it really is (and even more fun to watch the MST3K ep with it featured), but it's still an enjoyable movie to watch!

If you ever read Tony Isabella's "IT! The Living Colossus" stories in the 1970s Marvel Comics (sorry, Tony, I forget off-hand where it appeared... was it Astonishing Tales?), you may find the pose here a bit familiar. There were a few issues in which the artist (and again, I'm forgetting his name... being exhausted plays havoc on the brain, you know!) appeared to use this and other references from this movie for inspiration for a few poses!

Now I just wish I had the books handy here to compare, because I'm positive this pose in particular was used! 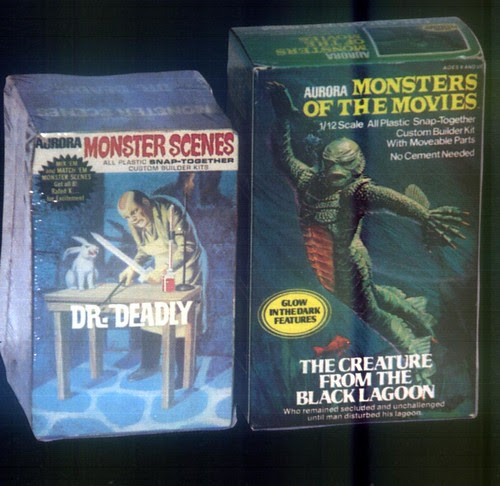 Yes, it's still more Aurora monster kits! To the left is yet another of the "monster scenes" line... to the right, it's the snap-together version of the Creature of the Black Lagoon!

If I recall correctly, the "Monsters of the Movies" line was based somewhat on the previous releases, just retooled for snap-together assembly, plus the bases were altered to allow it all to fit in a smaller box. 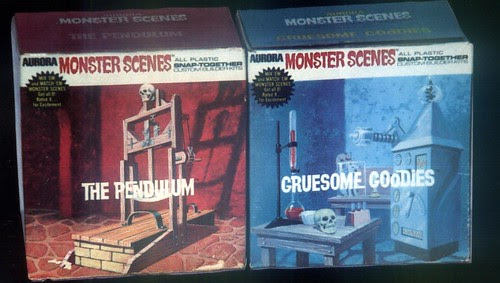 Genre Movie Image of the Day: The Beginning of the End Poster! 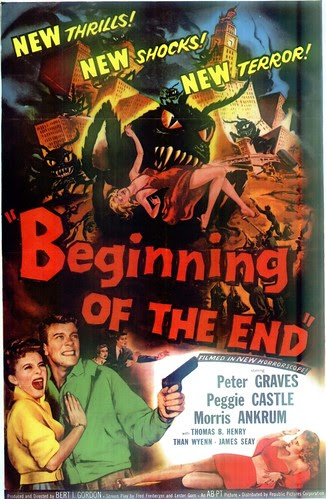 You know... I've come to realize a truism regarding old sci-fi/monster movies: If Peter Graves is in it, it's probably going to be extremely cheesy. Of course, this poster manages to carry that promise even if it didn't have Mr. Graves' name on it, don't you think?

And am I the only one who, upon looking at the critters on this poster, is reminded of the "Zanti Misfits" from the Outer Limits? 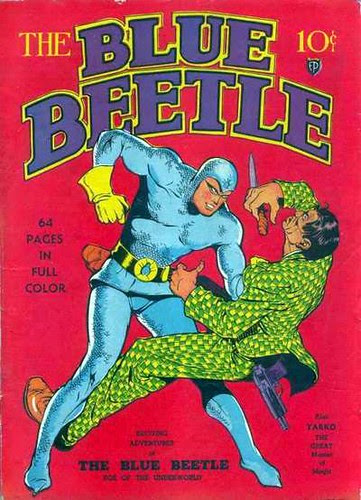 So here's the original Blue Beetle, in issue 1 of his Fox Comics title! So far, there have been four distinctive Beetles using that name... this one, policeman Dan Garrett who drinks a super-vitamin potion to get his powers; the first Charlton version, archaeologist Dan Garrett, who found a mystic scarab that, when he said the magic words "Khaji-Da!" would transform him into the super-powered Beetle; Ted Kord, inventor and industrialist, who took on the Beetle identity at the dying bequest of the second one when he was killed by Ted's uncle on Pago Island; and then there's the current one, whom I'm not familar with too much, save that he's supposedly using Dan's mystic scarab as the source of his powers.

This, despite that DC's first Blue Beetle series established that the scarab was actually some kind of magical/alien lifeform that was symbiotic in nature (I think we learned this when it reanimated the corpse of Dan Garrett and sent him on a rampage).

Work and Other Stuff...

So, as I've said, this week I'm going to work at about 6 am for some cross-training in paper planning. Basically, this means that I'll be able to figure out how big the newspaper will be each day (it involves a fairly convoluted calcuation involving the number of inches the news department wants, plus the number of inches of retail advertising, plus the number of pages of classified advertising, and figuring out the best way to fit that all in) as well as determining where each ad will be run.

It's kind of interesting, although even after two days, a lot of it's still Greek to me.

One good thing about this is that I'm getting off earlier than usual... yesterday at 3, today at 3:30, so I can pick up our foster son (the three-year-old, who we refer to on the "Building Our Family" blog as T3) from his daycare and get to spend some time with him before Jessi comes home with T1, our other foster son (who's 1). It's kind of confusing, having two boys whose names start with T (their middle initials are both J, which doesn't help). T3 will eventually be adopted by us, and he's already starting to call us "mommy" and "dad."

It's a real challenge trying to manage my normal at-home stuff with these two, as you can imagine! And I'll probably write some about that on the other blog either tonight or tomorrow (I hope you're checking it out).

In other stuff... last week, I obtained nine boxes of LPs that were being offered for free. When I had a few spare minutes, I'd look through them, pull some albums that looked like they might be worth selling on eBay, and take them to my office to see how they fared in recent auctions. Out of those nine boxes, I have a stack that's maybe eight inches tall that I'll try to get up for sale, plus a few that I'll probably offer directly to the owners of a few blogs that create MP3s of out-of-print LPs and offer them to share online. I'm pretty sure those few aren't on CD these days!

Of course, I have no turntable, so I'll be estimating condition as best as I can.

Haven't been reading anything from the library lately... in fact, there's a few items being held for me right now I probably should just cancel, because there's no way right now I can consider taking on any reading that needs to be finished at a set day!

In another week or two, I should be getting another freelance gig coming in that I can't divulge anything about. Fortunately, the deadline for that is pretty flexible, as I'm not sure when I'll be able to get much done on it!

The last few gigs I worked on still haven't paid me yet, which is annoying as hell... I could really use that money right now, as little as it is!

I may be putting some comics for sale on the eBay before too long, too... I've been starting to read the books I bought at Emerald City, and those will likely be what's going to go up, assuming I decide to put up any at all. I'd been kind of hoping to rebuild the collection a bit, because it gets very tiring building a collection, and then having to sell it all off! 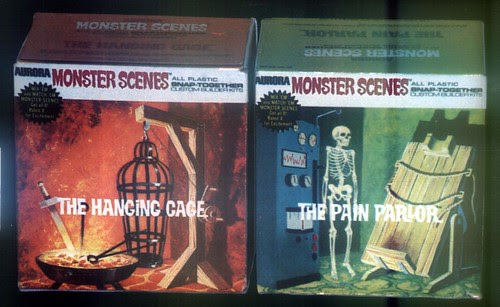 Aurora's Monster Scenes were, like many of their previous theme lines, models that were much desired by myself and my younger brother, Jeff. Heck, even youngest brother Karl wanted them, too!

I think one thing I loved most about these were that they were snap-together, no glue required -- too bad they weren't also "no paint required," because I was even sloppier with paint than I was with glue! Sadly, I'm not any better at painting today than I was then (which anyone who's seen the props from the Emerald City Comic Con's trivia contest will no doubt attest -- and those were only painted a single color each!).

I fondly remember the ad promoting these in the comics, too... as well as seeing ads for them in black-and-white magazines from Warren (mostly Famous Monsters, as I was never into their comics) and Marvel!

Genre Movie Image of the Day: Beast from 20,000 Fathoms Poster! 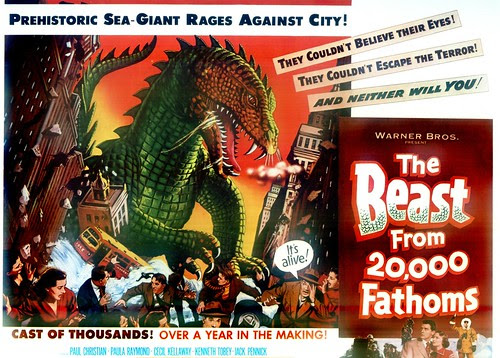 Continuing with the genre movie posters, here's the Beast from 20,000 Fathoms, which I haven't seen in a long, long time! But I do recall that the movie actually lived up to the poster, more or less!!

My recollection is that the stop-motion work was done by Ray Harryhausen, although I seem to recall Jim Danforth working on this one, too.

You know, I think the last time I saw any scene from this was in a "Whose Line Is It Anyway?" bit, where Colin Mochrie is standing in front of a green screen, pretending to be an on-the-scene TV reporter, as Ryan Stiles and one of the other performers (who can see what's being inserted behind him) give him comedic clues as to what's going on! 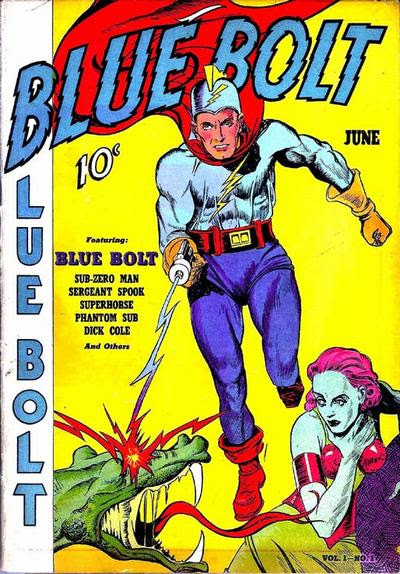 Here's Blue Bolt, presumably #1, although I'm not 100% certain of that. While not one of the Simon/Kirby covers, this is still a pretty nice piece of work!

I've always liked the way they have the logo going across and down... were there any other comics whose titles were laid out like this, almost crossword-fashion?

Genre Movie Image of the Day: The Wolf Man! 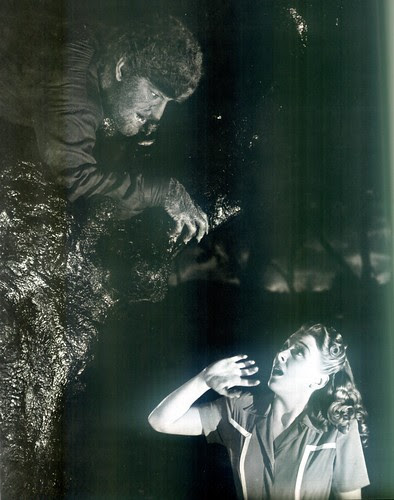 Why? Because, like the Frankenstein one the other day, I mislabeled the file, so it uploaded out of sequence!

Back to the movie posters tomorrow! 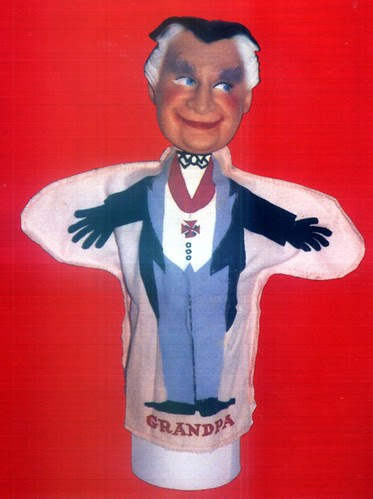 This puppet of Grandpa Dracula shows that yes, pretty much all hand puppets of the 1960s (or at least, most of 'em) that were based on TV characters tended to have a plastic molded head, and then a basic cloth/flexible plastic (like a cheap tablecloth) body with the rest of the body screen or offset-printed on it.

Now, from a collectible basis, this isn't a problem, obviously. It certainly makes the puppet easier to display, after all!

But from a performer's standpoint (obviously not a consideration of the manufacturer), this was a terrible design! I used to be into puppetry myself (and may get back into it, now that I'm a dad and have children to entertain), and I can tell you that you have got to have a body long enough so that when you're performing behind the stage, nobody can see your arm!

Then again, I'm probably just being way too analytical about this. 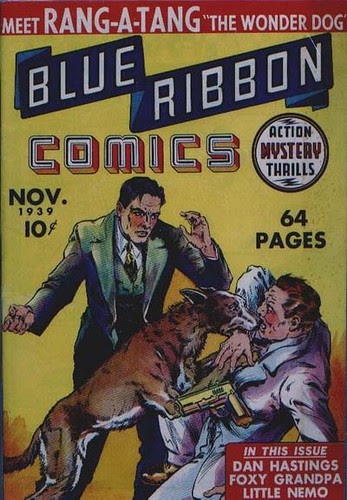 This issue of Blue Ribbon Comics, from before the super-heroes took it over (and before a certain red-haired teenager took over the entire publishing line), features Rang-A-Tang, the Wonder Dog. Now, if you're not familiar with movie star Rin-Tin-Tin, also sometimes called a Wonder Dog, you may be wondering why such a strange name (not that Rin-Tin-Tin isn't any stranger).

Rinty, as I think RTT was sometimes called, was the biggest dog in the movies until Lassie came along (and of course, Lassie "herself" was bumped when Benji came along, who was bumped by Beethoven, but by that point, there were no more real dog stars in the movies... at least, none that weren't animated!).

But Rang-A-Tang wasn't the only comics dog influenced by RTT! DC had Rex the Wonder Dog, but even before that, there was the wonder dog (whose name I'm blanking on now) who took over the original Green Lantern's title... and of course, there was also Ace, the Bat-Hound... German Shepherds all!

I have no idea if Marvel ever tried to come up with a similar dog hero.