This and That Time (You Knew it Was Coming!)

OK, got a few things to write about, figured I may as well this and that them!

Who Wants to be a Superhero?

We're two episodes into this season of WWTBAS, and frankly, I'm amazed that the group Stan chose was the best ten of the applicants. I mean, really, Stan? To be honest, not one of them is standing out in my mind as the one or two that I hope will win it.

You may recall last summer, I was initially rooting for Major Victory before switching allegiance to Feedback (who ended up winning). This time around, there's a few that I'm hoping will get kicked out soon (Mr. Mitzvah is one - although I suspect he's the "mole" that was implied in the teaser for next week's episode; Hygena [or however you spell her name] is another). I suppose that if I had to pick one at this point, I'd go with the cop, although I forget his character's name right now. He does seem to have the best grasp at this point as to what Stan's looking for.

I did enjoy the villainess, Beesting, who was introduced in this second episode. She'll be teaming up with another villain, whose name is unknown (but appears to be one of those effeminate villain types that seem to pop up in Anime so often... I was kind of hoping for the return of the Dark Enforcer from last year, though).

The challenges have been interesting... Jessi was amazed that the contestants were actually exposed to real bees! Fortunately, nobody seemed to be allergic to bee stings.

So, this coming week, I'm in the pool for jury duty, much to my boss' dismay. Monday morning I need to report at 8 a.m. with the others in the three groups selected for then. One thing that concerns me is that when I got the notice for this, there was a form to fill out and mail within five days which, I've got to be honest, I never got mailed out, and at this point, I figure I should just bring it in with me because it wouldn't reach there before noon Monday at the earliest. Also, I was supposed to fill it out in black ink, but I used blue (the line about black ink was in the tiniest print on the form). I do hope there'll be no penalty, legal or otherwise, for failing to return that in time... but I doubt any of the info will have an effect on whether or not I'm called to duty.

Coming Up in the Random Acts!

I've been getting some comics advertisements scanned in, and hopefully I'll get them uploaded once I have enough to last for a while once I start posting them. But I'm considering stockpiling until I'm running out of classic collectibles posts!

I may also end up missing a day here and there... unfortunately, I probably won't know ahead of time if I'll have to skip a day of blogging, because it'll be kind of a last-minute thing. I'll do my best to blog every day, though!

Email ThisBlogThis!Share to TwitterShare to FacebookShare to Pinterest
Labels: About Me, Television

From my "For the Birds" file, here's Master Comics 32! 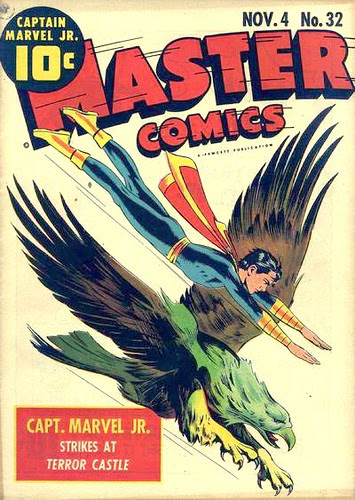 Man, that is one BIG eagle! And oddly-colored, too!

Okay, my brief research revealed that I haven't posted this photo, or indeed, any of the other photos of robot toys: 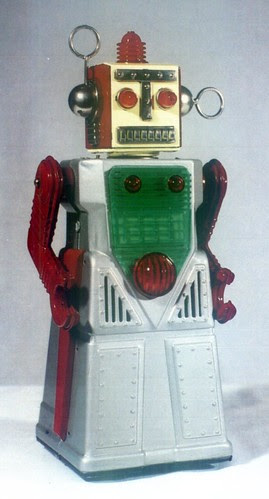 So that means it's Robot Carnival for the Classic Collectible posts, at least until I finish off with some Zeroids!

This one is called "Chief Robot Man," and no, I have no idea why it had that name.

Well, not too much, really.

You may have noticed that I've seriously cut back on the number of labels this blog uses. Honestly, I was looking over them today and realized I had label after label that only affected one post, and many others that only fit two or three posts!

Finally, I decided to see how much I could condense the labels down... and I think I did a pretty decent job of it.

Yes, I've not only uploaded more covers to Flickr, I also took the time at work to organize them! So, for another 166 days, I've got a comic book cover of the day! 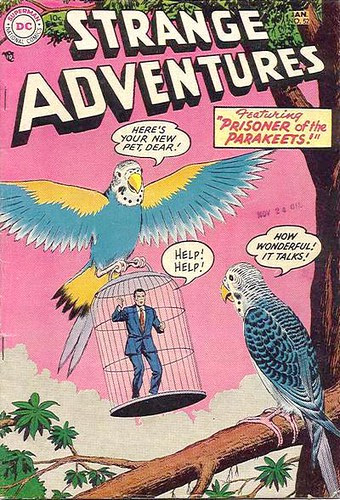 This cover for Strange Adventures 52 is from my "For the Birds" file, and it's one of those classic DC sci-fi twists on a regular situation! 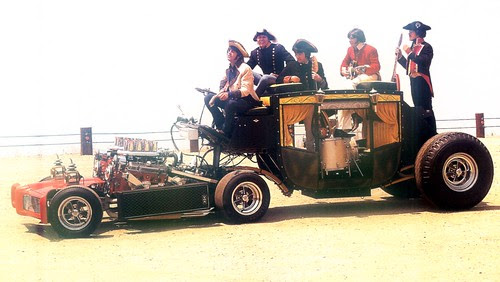 Here's the car that Barris designed for Paul Revere and the Raiders... which doesn't look at all practical to drive, does it? 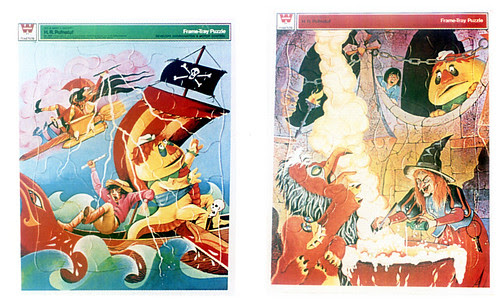 I know what you're thinking... surely I don't have any more Pufnstuf stuff after these puzzles? 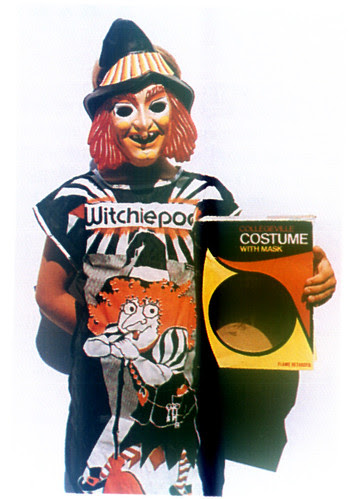 Definitely the summer slump at the newspaper, meaning I have lots of dead time during the day (heck, I've been here less than an hour and we're dead), so that means I have things on my mind that I may as well get out real quick...

This is Pop Culture, which you'll find on the link list, has s added the Random Acts of Geekery to the linklist there, and my thanks go out to John (and welcome any of you who came here from that link!).

I deal with one 3-year-old at home... and too many people who act like they're 3 everyywhere else. I just had to say it.

I really need a new Macintosh that's OSX compatible, which my Mac at home isn't, because too many websites are becoming incompatible with my OS9 browsers. Dave's Long Box is one blog I can no longer read at home, and now it seems I can't organize my Flickr photos at home, either (I get Java errors). Although if you note here that occasionally, there's a double-letter in a word that doesn't belong, because I don't always get a good preview on screen even in OSX of what I'm typing (I have the same issue with Yahoo mail). Yeah, more Pufnstuf stuff... and with this puzzle, I ask the question: How can a painted puzzle make the Pufnstuf costume look even more like a person in a costume than the real costume looked like???

Genre Movie Image of the Day: World Without End Poster

And sadly, this is the last of the genre movie images I have to share, at least for the forseeable future.

And even worse, I have to end it with the poster of a movie I've never, ever seen in my entire life. 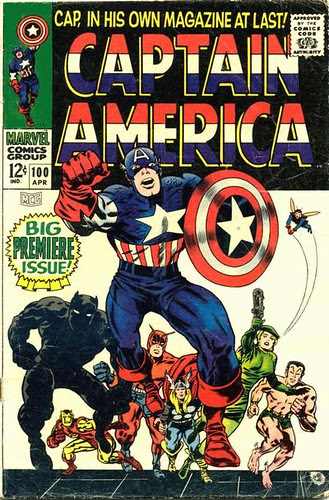 Coming Up on the Random Acts...

Naturally, there are lots and lots and lots of comic book covers to share, although I obviously need to upload some more to Flickr! There's just one book left in that Flickr stream for tomorrow, so I need to get on that!

Being a new foster father has, alas, not given me time to do any additional comic book ad scanning... but I do have some stuff that was scanned before the kids arrived that I should be able to upload before too long (although I've just realized I didn't finish scanning ads from the last book I was working on!).

One way or another, I'll have content here! I may still end up having to skip a day here and there, but hopefully that'll be few and far between.

Still looking at some of my favorite Kirby covers... 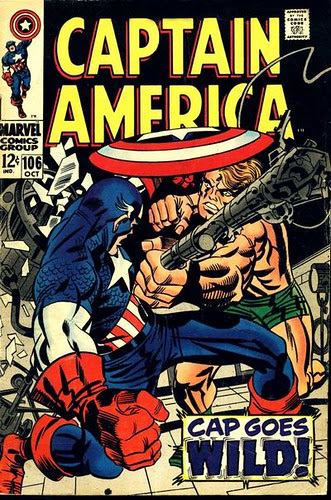 ...and Captain America 106 is definitely one of them! This is one of those covers which is indelibly burned into my brain, and I've no doubt I could recognize this cover if someone held it up 100 yards away from me!

Genre Movie Image of the Day: When Worlds Collide Poster! 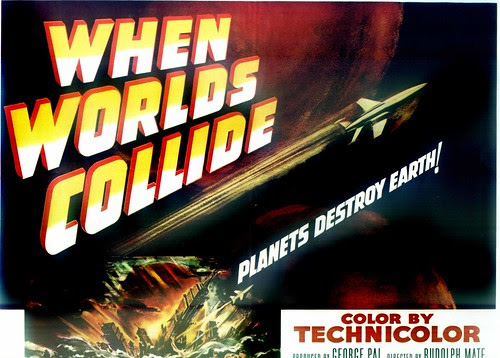 Man, it's been too long since I've seen this movie...

Tired of Pufnstuf stuff yet? I hope not... 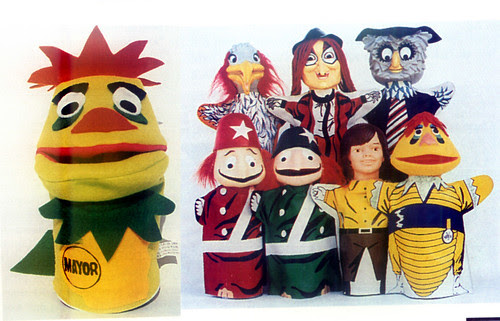 These are some really good-looking Pufnstuf puppets!

I know, I know, I went two full days without blogging a thing, and for that, I apologize.

I have two reasons for this happening:

1) I was on vacation last week, and we just did way too much stuff, and didn't do enough relaxing...

2) My seasonal allergies seem to be back in season again.

Combined together, these two things made me (and continue to make me) massively exhausted... but I wasn't going to wait another day before posting anything! So read on, with some three-in-one posts! 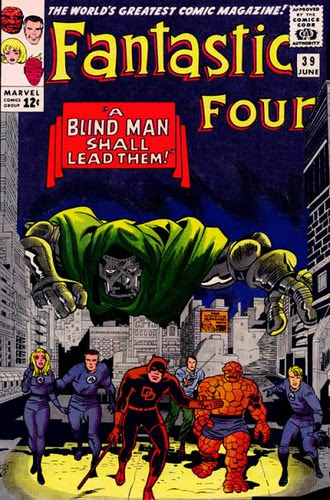 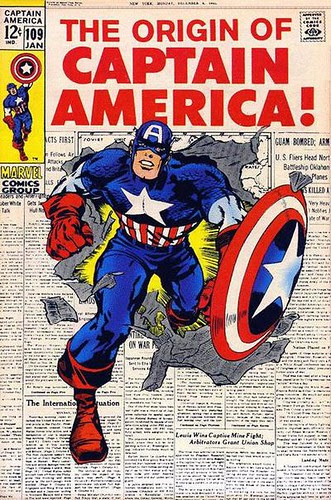 I love the background montage on this cover... Kirby doing Captain America #107! 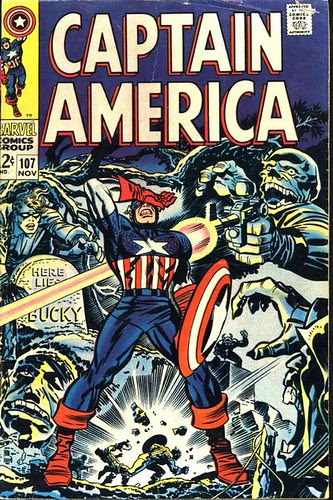 First up, a still from The Time Machine (I love time-travel stories, you know): 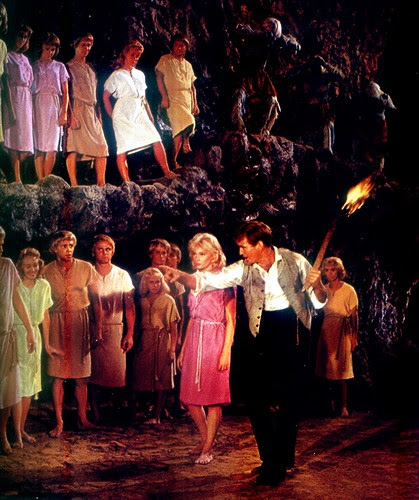 Next, the poster for "Tobor the Great" (spell that name backwards!): 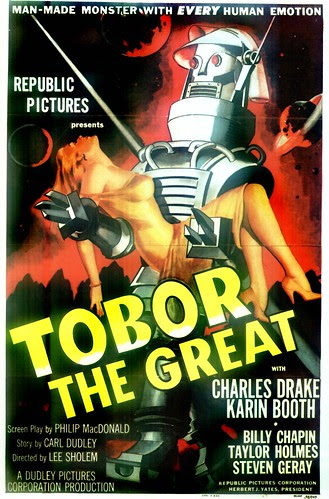 And finally, a partly-cropped poster for "The War of the Worlds!" 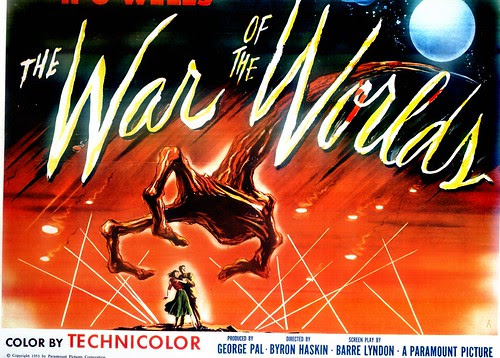 3-In-1: Classic Collectibles of the Day! 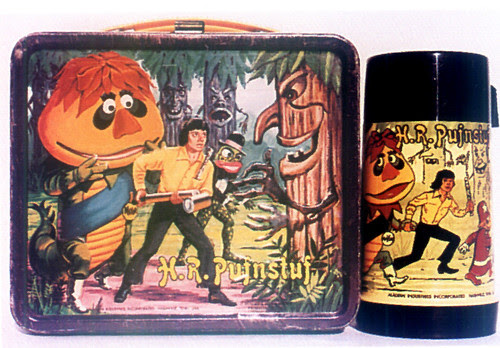 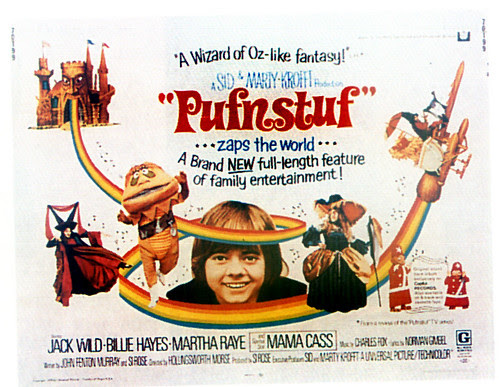 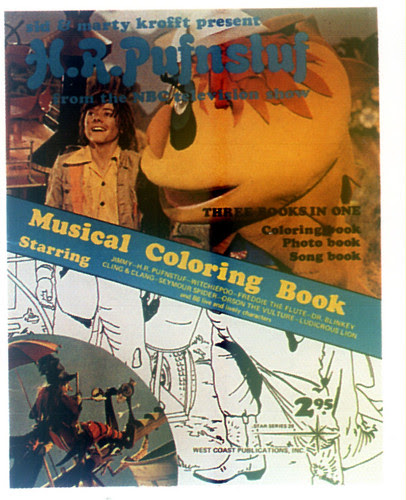 Some more Pufnstuf stuff for you here... and honestly, I'm running out of things to say about Pufnstuf (must be my allergies).