Alvin and His Pals in Merry Christmas 1

Starting things off on the right foot, here's page 7 from The Avengers 8, by Jack Kirby!

From the Avengers-Defenders War, here's page 23 from Avengers 118, by Bob Brown!

Getting back to the truly great stuff again, here's page 20 from Avengers #1, by Jack Kirby!

More Heck Avengers! This is page 14 from Avengers #35!

Next time, we'll at least start out with more Avengers!
Posted by Jon K at 12:01 AM No comments:

Movie of the Week: War of the Gargantuas

I hope you'll enjoy this presentation of the sequel to "Frankenstein Conquers The World"!

Mark Evanier reports that Forry Ackerman, the creator of "Famous Monsters of Filmland" and monster fandom legend, passed away last night. You can read Mark's entry about it here.
Posted by Jon K at 2:34 PM 1 comment: 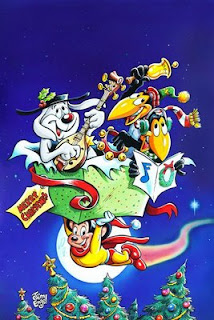 Thanks to Jim Engel, here's a scan of the original art for the Mighty Mouse & Friends Christmas Special, sans logo!!

Christmas with Snow White and the 7 Dwarfs (one-shot)

Bugs Bunny's Christmas Party 6
Posted by Jon K at 12:01 AM No comments:

By the 10's: My Greatest Adventure/The Doom Patrol!

This By the 10's is one of the few DC titles that changed titles in midstream... and I can honestly say that I don't think I ever read any pre-Doom Patrol issues of My Greatest Adventure, so no comments on those...

Y'know, it does occur to me that maybe I've read some of these stories if they were reprinted in the 1970s...

Looking at these first seven covers of this By the 10's, I wonder how things would've worked out if someone at DC had created a group of adventurers who didn't have powers for this book... or maybe if the Challengers of the Unknown, Sea Devils, or other groups had been moved into this title!

Issue 80, and the Doom Patrol are introduced... and this title would never be the same again!

Issue 90, and the Doom Patrol's already taken over the title!

Issue 100 - man, they threw new stuff in the Doom Patrol that stuck all the time, didn't they?

Sadly, the original run of the Doom Patrol didn't last too long after this issue... and despite the attempts to revive the book, nothing seems to have really stuck. I had high hopes for John Byrne's revival, but even that didn't work out. At least there's Archives, although I'm still hoping for Showcase Presents The Doom Patrol!
Posted by Jon K at 12:01 AM 2 comments:

I'm guessing that some of you are reading this blog for the first time this week, thanks to Heidi MacDonald's mention of the Christmas Comics Countdown at her The Beat column at the Publisher's Weekly website...

...I know for sure a new reader is Lew Stringer, who also has a great blog of his own, Blimey! It's another blog about comics! Since Lew's a Britisher, his blog brings a different viewpoint than most of us American bloggers... he's also doing a Christmas Comics Countdown of his own, featuring UK Comics! Check it out! Lew's blog is the latest in the "Random Blogs of Geekery" blogroll!

A special welcome to Jim Engel, whom I've just learned is a reader (new or otherwise) to the blog. I fondly remember Jim's stuff in The Comic Reader back in the day (usually paired with Chuck Fiala). Jim's done some Christmas Comics Covers himself, a time or two, like this one: 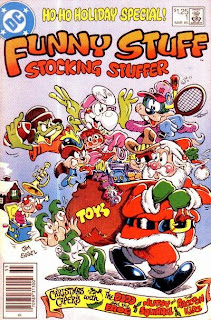 I know he did a Mighty Mouse & Friends Christmas Special, but I can't seem to find that cover anywhere on the net, and sadly, I don't have the issue myself! Hey, Jim, if you have a scan handy of it, feel free to email it to me at waffyjon at comcast dot net, and I'll post it here!
Posted by Jon K at 7:24 PM No comments:

Email ThisBlogThis!Share to TwitterShare to FacebookShare to Pinterest
Labels: About Me, christmas comics, Links

From beautiful Downtown Burbank, it's Rowan and Martin's Laugh-In Collectibles!

And here's an issue of the Laugh-In magazine... I wish I had at least one of these, to see what it's like!

Here's a Laugh-In paperback book, which I'd imagine was full of photos and bits of scripts!

I'm not sure if these were two different Laugh-In records, or the same record... but I have MP3s of one of them, and it's all stuff from the show, but stuff that wasn't visual!

Man, now I have a new View-Master set added to the list of View-Masters I wish I could get some day...

And now, we move on from Laugh-In to Land of the Giants!

Here's the cover for the novelization of Land of the Giants, which I may have had at one time in the past...

I think I may have posted a photo of this earlier, but this is a much better photo of this View-Master set (and it's another of the top 10 sets I'd love to own some day)!

I saved this photo not because I'm a big fan of Mister Magoo... just the idea of an Arabian Nights comic book with Magoo was too bizarre to pass up saving!

Here's two different boxes for Marx's Daktari playset! I loved this show when I was a kid!

Next up in the TV collectibles... Hey, Hey, it's the Monkeemobile!

And here's a M&M card game!

Next up, this Pufnstuf lunchbox!

Here's the Six Million Dollar Man View-Master set, but believe it or not, it's not on my list of sets I'd love to get some day!

And what better way to wrap up the TV collectibles stuff, than with...

Next time... a UFO coloring book, and then we'll look at more View-Master stuff!
Posted by Jon K at 12:01 AM 2 comments: