Movie of the Week: The Adventures of Captain Marvel!

Well, okay, it may not be a movie in the traditional sense, but it's my blog, I can set the rules my way, okay?

Here's the trailer for this serial:

Funny Stuff was DC's premier funny animal book of the Golden and at least early Silver Ages... if you are a fan of Captain Carrot and his Amazing Zoo Crew, you may recognize some of these characters!

Here's issue 10, I believe those are the Three Mousketeers (or at least one of the groups calling themselves that, anyway).

Issue 20's cover features the Dodo and the Frog -- the Frog did make an appearance in the first series of Captain Carrot!

And from issue 30's cover, it appears the D&F were considered the stars of the book at this point!

Here's issue 40...it looks to me like the characters have been evolving!

I don't know who the cover usurpers on issue 50's cover are!

Issue 60's cover demonstrates the cartoon maxim that any air blown or pumped into something resembling a balloon will transform into hydrogen or helium!

And with issue 70's cover, that wraps this up!

So, just in case you're curious as to how my latest round of eBay sales is doing...

After reducing the price on the TwoMorrows mags, I've sold 12 of them (but still plenty left). I've received a fair amount of bids on the action figures, more than I really expected this early! So far only two of the Big Little Books have bids, and a number of items have no bids at all... but a lot of the auctions have people watching 'em!

If you've been enjoying the Monster Book installments of Children's Book Theater, don't forget I have two books up for grabs... Dracula's Daughter and King Kong, and as with all the stuff I'm offering this time around, it's all low starting bids!
Posted by Jon K at 12:31 AM No comments:

Man, I wish they made these air fresheners today... although come to think of it, do I really want to know what scent they think the Joker or the Penguin are, to say nothing of Batman or Robin?

These Play Lites are an interesting idea, perhaps they just picked the wrong characters? For example, Iron Man might've worked better, with the uni-beam and all...

This Prestofix box may say "Super Heroes," but the logo style SCREAMS "Super Friends," doesn't it?

Not sure what happened to the front photo that goes with this, but the back of Super Powers Puffy Stickers had this picture to color!

These cups featuring Superman and Wonder Woman are from Argentina!

This Batman Whichway book was part of the Super Powers merchandising!

I'm pretty sure this record's been ripped and available to download as an MP3 somewhere...

That's a great Super Powers puzzle for the kids there!

Here's a whole set of stuff stores got to help promote their Super Powers sales!

Ah, there's the front side photo of the puffy stickers!

I wish the photo of this Superman Super Powers puzzle was sharper!

How's this for an obscurity?

Issue 10 (if you counted from the first issue normally) 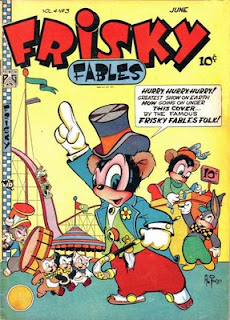 This time, we start off with Turok, Son of Stone! These pages are from Turok #26, and are by Albert Giolitti!

Hmmm, thought I had more Turok than that! Oh, well, moving onward...

Here's the cover of Two-Gun Kid #88, by Ogden Whitney!