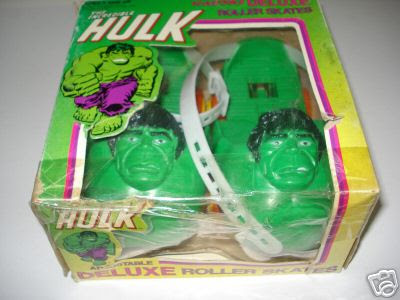 It's Cool Stuff time again, and this is an all-Hulk stuff edition this time around, beginning with the above Incredible Hulk figural roller skates from 1979! Don't forget that if you want to read the Bronze Age Hulk's point of view on these items, check out Hulk Blog! More stuff after you click 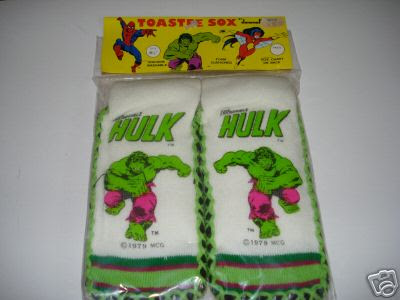 Yes, let the Hulk keep your feet warm with these Toastee Sox from 1979! As you can see from the tag, Spider-Man and Spider-Woman versions were made as well (I'd guess Spider-Woman was included so they could sell to girls too). 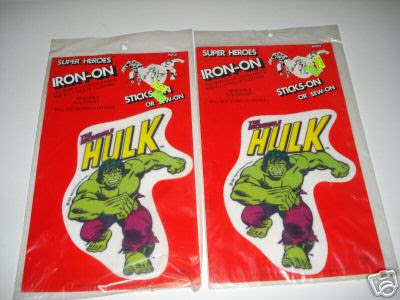 Yes, my friends, this pair of Hulk patches (dating from 1980) are using the exact same piece of artwork seen on the Toastee Sox! I'm kind of half-surprised that it wasn't used on the skates box, too, as it was one of the more over-used pieces of licensing art! 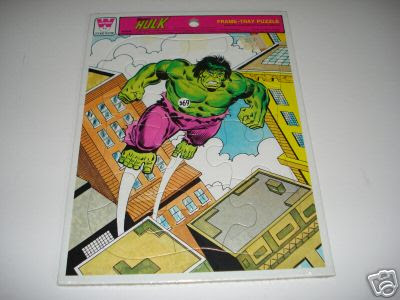 Speaking of 1980, here's a Hulk frame-tray puzzle, with the green one jumping through the city. Puzzle does not show Army helicopters pursuing him, obviously! 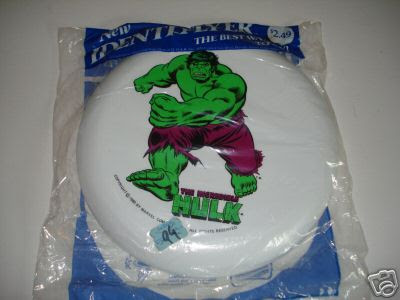 This flying saucer... oh, heck, let's just call it a Frisbee and be done with it... is another 1980 item! At least a different piece of stock art was used here! 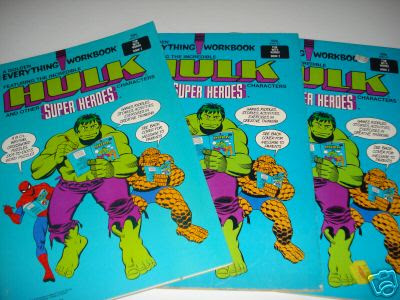 Another 1980 Hulk item here, this "Everything Workbook" obviously featured other Marvel characters, too. And yes, the seller of this had three copies up for grabs! Oh, yeah, I wanted to bid on this one myself, but I'm pretty sure the starting bid was too rich for my blood, even before I was a broke college student (assuming I still am a college student by the time you read this, given that I'm writing this entry way back in May and all the stuff that was going on then)! 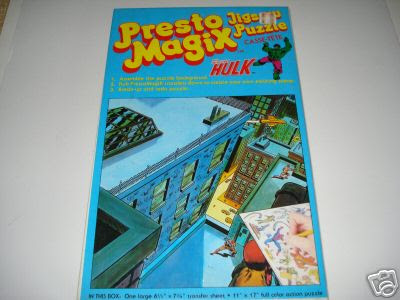 From 1981, here's a Presto Magix jigsaw puzzle! I'm not quite sure how that worked... although if I had to hazard a guess, I'd say you would first assemble the puzzle, then rub on the transfers to the finished puzzle to decorate the scene. 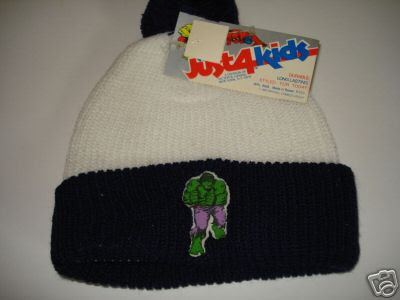 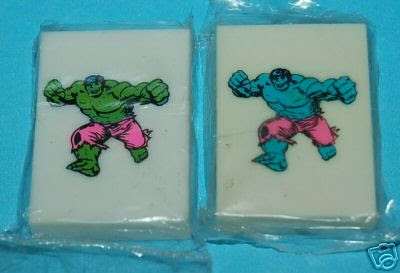 Hulk erasers from Argentina, in your choice of skin tones, apparently! 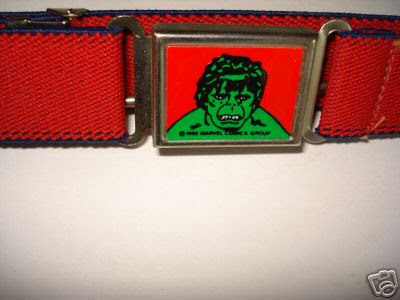 This Hulk belt was manufactured in 1983, and isn't that a pretty bad rendition of old Jade-Jaws? 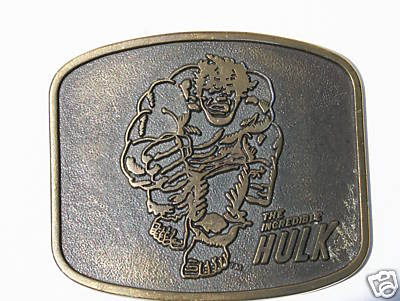 I'll give the manufacturers of this Hulk belt buckle a lot more credit than the 1983 one, given the limitations of the form they were working with! 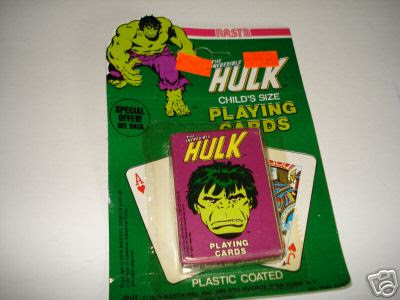 Hulk playing cards from 1979! Nasta produced a lot of toys like these in the late 70s and early 80s, all cheap, all to be hung on hooks! 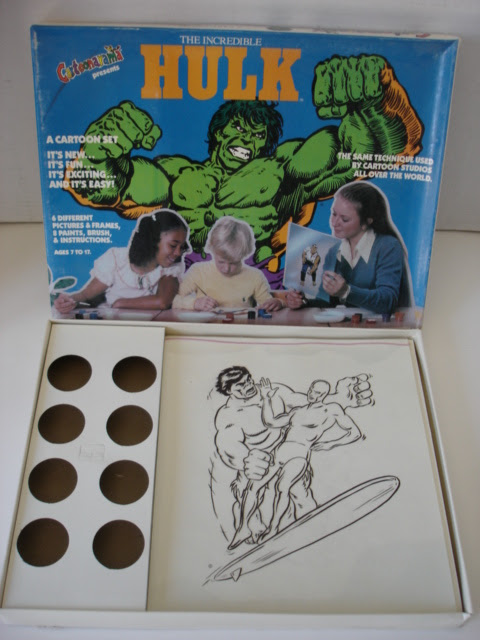 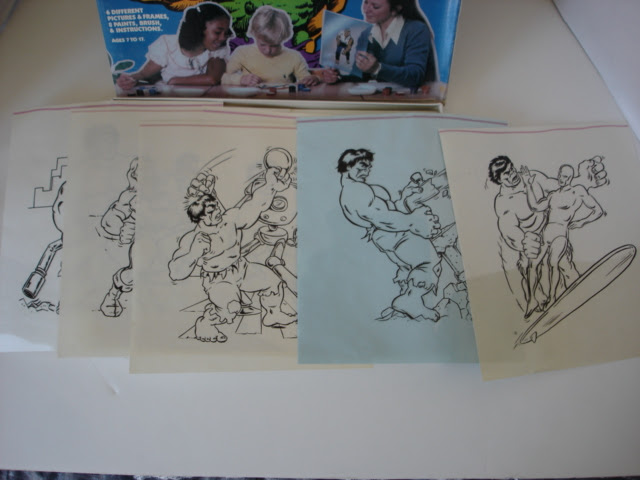 Sometimes, finding cool stuff on eBay to swipe photos from, I learn all kinds of things! Take the above item, for example... before I came across that auction, I would've thought that the Cartoonarama line only lasted from the late 1960s to the very early 1970s... yet this certainly looks like it's using a late 70s/early 80s Hulk for the box art! Oh, you don't remember what Cartoonarama was? Basically it was like a coloring book, except the pages were printed on cels (clear plastic sheets) for you to paint, as if you were painting animated cels, and then you'd insert them in to the cardboard frames provided. 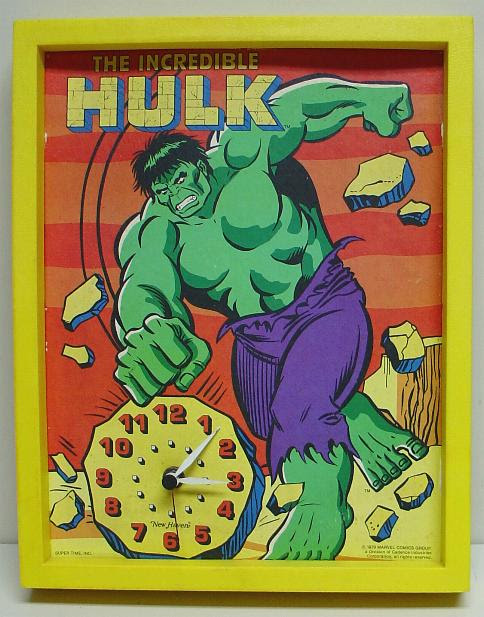 Despite the artwork on this Hulk clock being pretty much awful (except for the head, which looks to me to be taken from a Sal Buscema piece of art), I really like this! 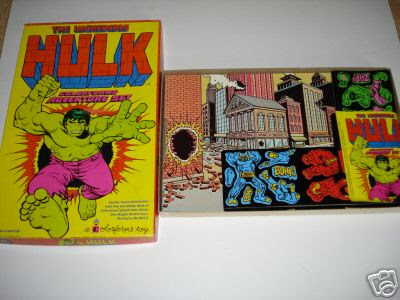 Hulk Colorforms, which uses yet another of those pieces of stock art that was very popular with the licensors! 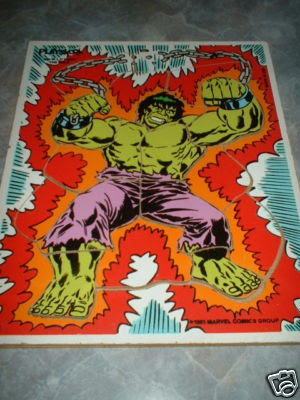 Another Hulk frame-tray puzzle, this one in wood! 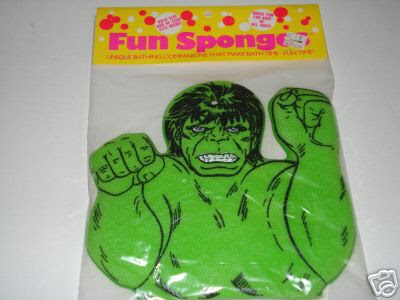 And the last item for this edition of Cool Stuff (but by no means the last of the Hulk items) is this "Fun Sponge" from 1984. Now, as a bath toy that you could play with in the tub like a puppet, I have no problem with this or similar sponge toys... but if you ask me, when it's used to actually wash one's body? That gets into creepy territory!

Next time around, more Hulk stuff, and maybe other Marvel characters, too!