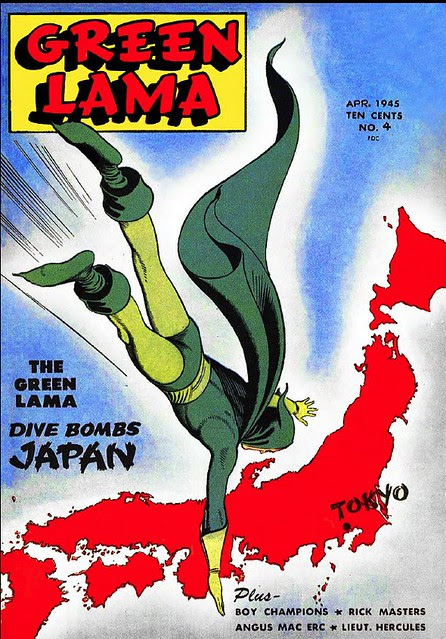 Time for a new Retro-Review, and this time I've selected The Green Lama #4, which was edited by Joseph Greene, art edited by Mac Raboy, with layout and lettering by Rhoda Lewis. This book was cover-dated April, 1945, and published by Spark Publications.
The first page of editorial content in the issue is the table of contents page, which tells us that the stories in this issue feature the Green Lama in “The Green Lama Bombs Tokyo!”, the Boy Champions in “A Bull in a China Shop,” a feller called “Peters Rings the Bell,” Angus MacErc in “The Right Bottle,” Rich Masters in “The Sky's the Limit!”, and Lieutenant Hercules “In Comic Land!”

Yes, like you, I've not heard of most of those characters either, so we'll all meet them at the same time!

First up, of course, is “The Green Lama Bombs Tokyo,” with art by Mac Raboy, and story by Richard Foster – and they're credited on the splash page, too! 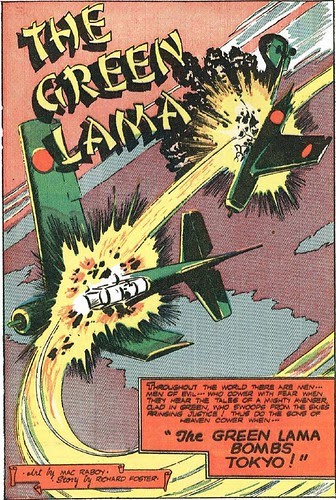 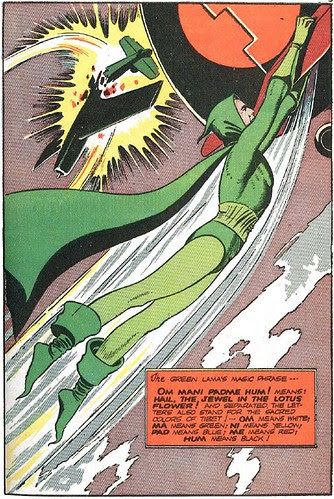 You'll notice that the Green Lama logo is done up in a pseudo-oriental style on the splash. The blurb on this page reads, “Throughout the world there are men... men of evil... who cower with fear when the hear the tale of a mighty avenger clad in green, who swoops from the skies bringing justice! Thus do the sons of heaven cower when – 'The Green Lama Bombs Tokyo!'” You should also note that this was a two-page splash, rather surprising to find outside of Simon-Kirby books of the Golden Age!

The story begins at the office of Jethro Dumont and his Tibetan servant, Tsarong. Jethro runs a clipping service, and as he reads the newspaper, he learns that the Japanese have learned now to make robot bombs and are using them in the Pacific! Jethro decides to spring into action, saying the magic word that transforms him... 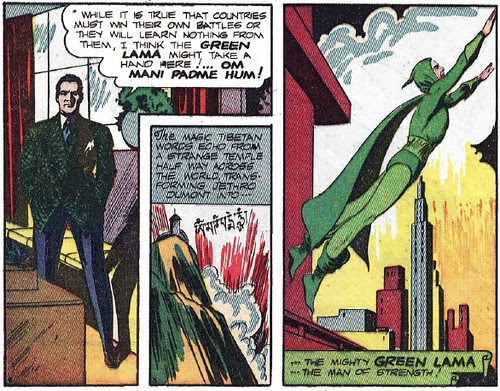 The Green Lama flies to an island in the Pacific where he meets up with some of the US forces there just as robot bombs are on the way! As the Lama promises to do what he can, a Joe complains that he joined the army to fight, but all he does is cook – and he promised his girl a souvenir, which the Lama says he'll try to provide!

Into the air the Green Lama soars, taking on the robot bombs with his bare hands, cracking wise the whole time! He also decides to ride one of the bombs in like a bucking broncho to give that soldier for the promised souvenir!

Later, the soldiers tell the Green Lama that the robot bombs are coming from the Tokyo area, but they haven't been able to spot the launching sites. The Lama decides to head Tokyo way to see what he can do! The next morning, the Lama is flying over Tokyo (odd that it took him all night to get from the Pacific island to Tokyo, yet he seemed to get from his office in New York to the island much faster!). On the ground below another robot bomb is being launched, with dialogue that was all too common for Japanese portrayed in comics of that era. 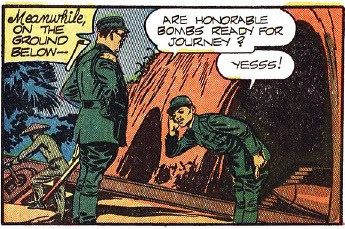 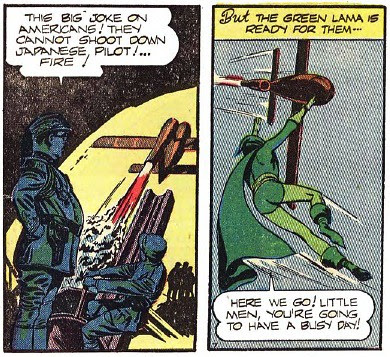 The Green Lama turns back every bomb that is launched, and sends it back to the launch site. The Japanese commander sends a fighter squadron to investigate, and when they find the Lama is responsible for this, naturally, they attack – to no avail! 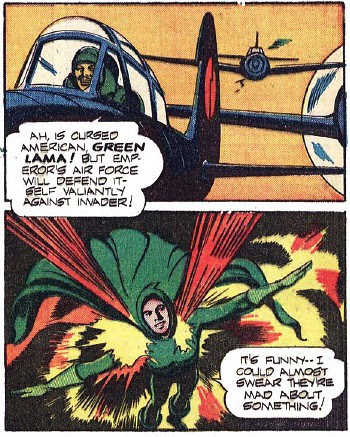 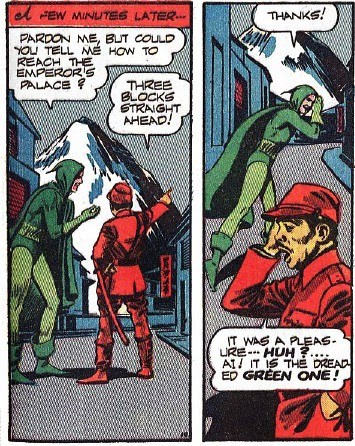 Of course, the Lama is able to tackle the fighters easily, and afterwards, he arrives at the Tokyo Library (conveniently labeled in English) so he can learn the Japanese language in five minutes! He then asks for directions for the Emperor's palace!


When he arrives at the palace, he's met by guards wielding swords and pistols, but obviously, they are no more effective than the planes were before, and in three panels, the guards are defeated. He proceeds to Hirohito's private room, and... 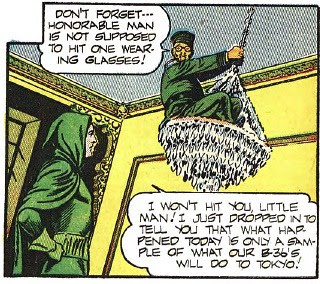 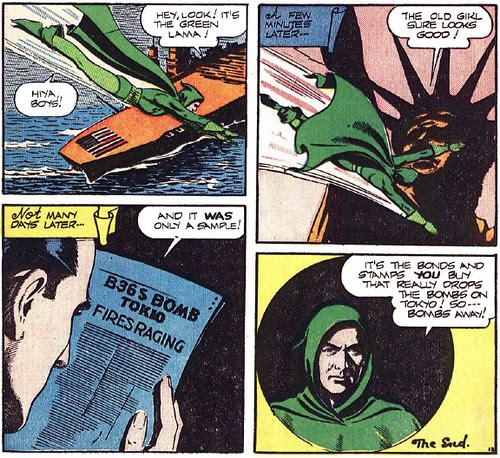 After making that threat, the Lama takes off, smashing a hole in the roof of the palace, and then heads back home again, and even finds time in the last panel for a patriotic message to the readers!


So... while this was a rollicking adventure to read, the story is definitely marred (by modern standards) by the stereotyping of the Japanese people, although it's nowhere near as bad as I've seen in some Golden Age books! The Green Lama himself seems to be almost a combination of the Green Hornet and the original Captain Marvel, given his oriental servant and magic word. This is the first Green Lama story I've read, but it seems that given his powers, it would've been difficult to provide a real threat that he couldn't easily defeat! One almost wonders why the Lama didn't just get the Japanese to surrender while he was in Tokyo (aside from the fact that the war was still going on in the real world). They did seem to have some problem figuring out just how fast the guy could fly, though! It certainly doesn't seem to have taken him long to fly from Tokyo to New York, did it?