The splash for this story is sort of a two-page spread, save for some space at the bottom for a row of panels. The story is credited to Bruce Elliott, with art by Perry Williams! 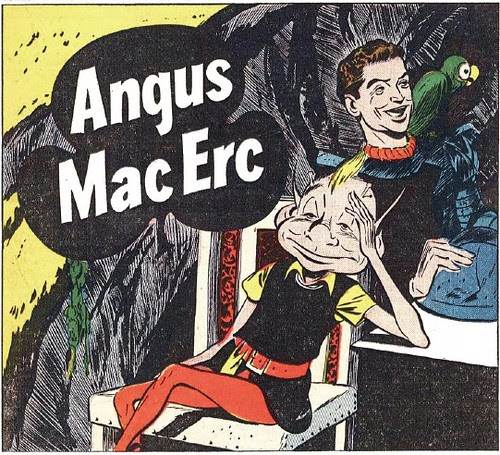 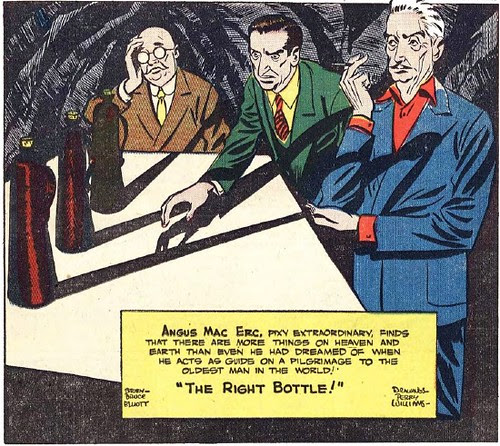 So, Angus MacErc appears to be a leprechaun (well, the splash calls him a pixy, but given the name...) who travels all over the place, and when this story opens, Angus is on holiday in Hollywood, and presents himself to an aging screen lover, who at first wants nothing to do with Angus, but the promise of renewed youth causes him to change his mind! The actor, Mr. Hamitmore, wants to take Angus to the home he used to own before he wasted all his movie star money, but Angus says they need to head to Death Valley to find eternal youth! But Hamitmore and Angus aren't the only ones headed to Death Valley! 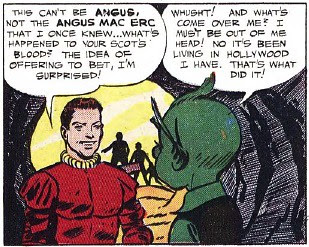 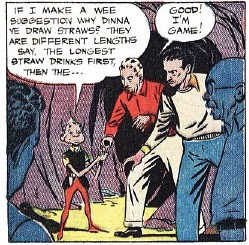 The man who lives in the cave with his parrot, Jean, tells the three men (Mr. John Hamitmore, Mr. Burst, and Mr. Rockbilt) that there are three bottles on a table. Two of the bottles hold deadly poisons, but the third contains the elixir of eternal life! There's no way to tell which bottle is which, and the three men ponder this. (I should mention at this point that the parrot is very cartoony compared to all the more or less realistic-looking people and scenery). Angus has a suggestion as to how they'll decide who gets to choose first, however... 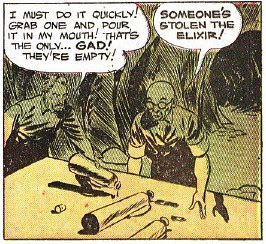 So the three draw their straws, but then nobody wants to show theirs first! The oldest man sends them out of the cave to figure it out while he ponders the bottles. After experimenting for one hundred years, he believes that combining the two poisons will kill even him! Meanwhile, outside, the three decide to show theirs all at once, and they do – but they've all cheated and torn their straws in half to try to avoid being the first to drink! But even after they've decided on the order of drinking, there's still a monkey wrench in the works, for when they re-enter the cave to begin drinking, they discover that...

Angry, the men seek out the person who stole the elixir, only to discover that the world's oldest man has expired! The men had figured that this was Ponce de Leon, but now he's dead! Angus informs them that Ponce couldn't take eternity any longer, and so he decided with the two poisons, he could finally end his immortality. But if that's what happened to the poisons, what happened to the elixir of eternal life?


And that wraps up that tale! Kind of a twist ending, wasn't it? And a rather screwy tale... Angus doesn't perform any kind of magic at all, just points Hamitmore to Ponce's cave, but we don't know how the other two learned about it. 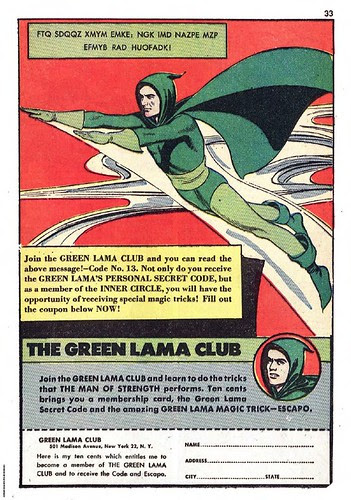 Next in the book was this feature:


Yes, friends, there was a Green Lama Club, complete with a secret code! In case you can't read the secret message, here it is for you:

Now, I'm not a member of the Green Lama Club, but this looked like a fairly easy code to break... especially when you look at the second and third words... SDQQZ = GREEN and XMYM = LAMA, therefore FTQ must be THE, and EMKE is SAYS... once I figured that out, I was able to translate the secret message to:

I'm guessing there was supposed to be an E on the end of the first word in the second line to make it properly “stamps.”

After the club ad, there was the humor strip “Pop Flys,” which was a boxing strip, starring the trainer Pop Flys, who insists that his star fighter, Mike, needs a vacation, even though Mike wants to just keep fighting. Of course, when they go into the woods, they run into a bear, and Mike has to box the bear into submission, after which Pop tells him they need to go back to the gym to get away from fighting! The strip was credited to Al Liederman.