Movie of the Week: Mothra!

When last we left off, the Lost Road Runner Mine had been found!

First up this time around is this 1970s-era t-shirt... or a reproduction of same! More after the jump!

Now for the last half of this comic!

Calling My Fellow Geek Bloggers (Or Other Geeks Active In Geekery)!

I am preparing a new feature for the Random Acts of Geekery to begin appearing here starting probably in the fall or early winter, called "The Way of the Geek!" The purpose of this feature is to spotlight my fellow geeks via an interview that will ask about the origins of their geekery and so forth. Now, my main focus on the initial batch of interviews will be on my fellow geek bloggers, but I know that not everybody who reads the Random Acts of Geekery is a blogger (or at least a geek blogger), so I want to make it clear that I would also be interested in interviewing anyone who is working in a geek field, or otherwise very active in geekery of some kind -- perhaps you're the organizer of gaming at your local comic shop, or are part of a club that gathers to do geekish things? Or maybe you've written geekish articles for an online or print publication?

Anyway, assuming any of this sounds like something you'd like to share some info about, please contact me at waffyjon at comcast dot net, and I'll send you the list of questions! I would also like to run a photo of each person who participates in "The Way of the Geek" with each posting, so if you want to send that along now or with your answers to the questions, I'd appreciate it! Oh, yes, and if you're not a blogger, let me know what geekish thing that you do so I can tailor some questions for you! I've got a pretty lengthy list of questions written up already, but may want to ask some follow-up questions too!

Dog of the Geek: Krypto the Superdog!

And now it's time to inaugurate a new feature here on the "Random Acts of Geekery" -- the long-promised (and hopefully long-awaited) "Dog of the Geek!" I was inspired to do this by Siksoid's Blog of Geekery, and his "Cat of the Geek" feature, although I'm doing a slightly different format than he is.

For each entry, the following categories will be identified:
Breed (if breed can be established)
Original Appearances (as in where this dog first appeared regularly)
Additional Appearances (other media, toys, etc.)
Biography (a brief discussion of the character's background, if such is avaialble)
Powers (if any -- cartoon characters, for example, tend to only have the ability to recover from any damage by the next scene)
Group Affiliation (if any)
Miscellaneous (this category is for discussion of alternate versions of the character and anything else I find interesting)

So, let's begin with the entry for Krypto the Superdog!

Breed: Kryptonian dog, resembling several different Earth breeds (depending on the artist). The Superman Supersite suggests he most resembles a white Parson Russell Terrier, although some drew him more like a Greyhound. The original appearances of Krypto had him looking more like a standard hound with pronounced jowls. 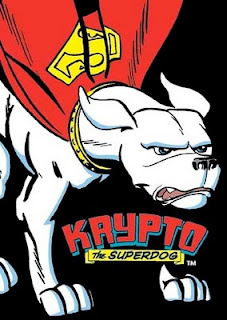 Biography: Before Krypton exploded, Jor-El placed his infant son Kal-El's dog, Krypto, into an experimental rocket that was supposed to orbit Krypton and then return. Unfortunately, a satellite knocked the ship out of orbit. Many years later, the rocket arrived on Earth, after Krypton exploded and Kal-El had arrived on Earth, growing into the teenage Superboy. After Superboy grew up to become Superman, Krypto spent most of his time roaming in space, still occasionally returning to Earth to assist Superman. 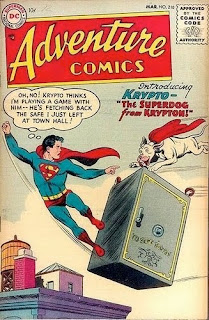 Miscellaneous: The classic story “Whatever Happened to the Man of Tomorrow?” featured the death of the original Earth-1 Krypto, dying of Kryptonite poisoning. After the Crisis on Infinite Earths, there was no Krypto for some time in the comics, with the exception of the “Pocket Universe” storyline (which featured a “classic Krypto”) until the “Death of Superman” storyline, in which Bibbo rescues a litter of puppies that were thrown into Metropolis Harbor, only to find that all but one had drowned. The survivor was originally named “Krypton,” but when Bibbo went to get a dog tag, the engraver could only fit “Krypto” on it, and so Krypto he was renamed. Later, when the clone Superboy moved to Hawaii, this second Krypto went with him. Somewhere along the way, this Krypto disappeared. More recently, in a modern-day “Superman Returns to Krypton” story, Superman brought a new Krypto back to Earth from Krypton with him, who also had the standard Kryptonian abilities, although this Krypto was presented more as having the intelligence of an Earth dog with super powers. Briefly, the clone Superboy was put in charge of training Krypto, but of late, Superman has been responsible for him. Not having read any current Superman titles in a long time, I'm not aware of his current status. There was also a Smallville episode entitled “Krypto,” which featured an Earth dog that had been given superpowers, but this dog was eventually named Shelby, and was kept as a pet by Clark Kent (see separate entry). Of course, my own dog is named Krypto, and has dressed as his namesake for several halloweens, and also has his own Facebook page.

Email ThisBlogThis!Share to TwitterShare to FacebookShare to Pinterest
Labels: dc, dog of the geek, Superman Related

And now, "The Island of Dr. Moreau" and other Mad Scientists!

So we're starting off this edition with some Popeye stuff, and we'll see what else I have in store for you today!

These Dakin figures are, unfortunately, based on the later Paramount cartoons, and not the classic designs... More after the jump!

Time to check in on the Road Runner again!

And it's time for Donald's Uncle Scrooge to get the By the 10's treatment!

Let's see what I have for you this time around... and stick around for a special announcement at the end of this post!

This John Romita illustration was done for Aurora's Captain America "Comic Scenes" model kit! The instruction book had a comic book included with it, including one scene that was designed to be set behind the finished model! And we'll see more of these pages after the jump!

Woo-hoo! It's time for Monster Monday again, and I've got more Kong stuff to show you this time around... and maybe more!

First up is this book, or one-shot magazine, called "King of the Monsters," which obviously came out around the time of the 1970s Kong. I don't remember seeing this one before! More after the jump!

Yep, still more Marvel Merchandise to show off, plus some other stuff!

And we start off with Mighty Marvel Team-Up Thrillers, one of those great trade paperbacks! More after the jump!