Movie of the Week: The Mummy's Shroud!

Yep, this was a double-feature trailer!

Posters and more after the jump!

Give-A-Show Fridays: Help! It's the Hair Bear Bunch and the Harlem Globetrotters!

For the three or four of you who haven't seen this yet, may I present to you the most epic bit of geekery ever created in video and posted to YouTube...

First up this time around is page 14 from Defenders #13, by Sal Buscema! More after the jump!

And now, the final installment, loaded with ads!

Here's the first page of a two-page ad for Famous Monsters back issues and a couple of paperbacks! The rest follow after the jump!

And here it is! It's Ralph and Bill from Mego's all-too-shortlived line! More coolness after the jump!

Schooling Update -- For those of you who want to read about it!

So here's the deal: I've now registered for fall quarter, managed to get three classes totalling 11 credits... too bad they're all on the same two days of the week, but there you go. And SPSCC is only offering two more classes in the 2010-2011 school year I need for my program, which total seven credits. If you want to read more of my rants about this, then click
Click for more ->
Posted by Jon K at 10:06 AM 2 comments:

Cookie was American Comics Group's entry into the teen humor market, which ended up being dominated by Archie!

Cookie blows a sour note on the cover of issue 10! More after the jump!

Dog of the Geek: Marc Antony! 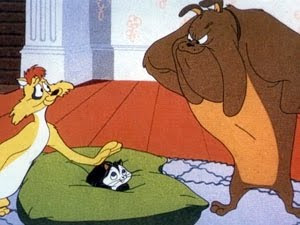 Other Appearances: Occasional cameos in other cartoons, movies, and comic books.

Biography: Marc Antony was enjoying his life as the sole pet in his human family's home until one day, Pussyfoot showed up, all cute and adoreable. Marc became utterly devoted to her, spending his days protecting her, and often hiding her from his humans.

Miscellaneous: Marc Antony and Pussyfoot have been suggested as being inspirations for the “Buttons and Mindy” segment of Animaniacs (see separate entry for “Buttons”).

When last we left our intrepid adventurers, Bugs and Porky had come to terms with Baltar the Viking, and they set sail to deal with a pirate, who turned out to be Sea Rover Sam, aka Yosemite Sam!

Our first item in this week's Monster Monday is this Belgium window card for Son of Frankenstein! More after the jump!

We'll start out this time around with some stickers!

Wow, that Aquaman sticker with "Keep Strokin'" -- talk about a product of its time! More after the jump!