Movie of the Week: The Mummy's Tomb!

Last of the Mummy movies for a while! Here's the trailer:

Looked like all the Superboy episodes were on YouTube when I looked, so if you've been digging these, check out the rest of 'em!

Ah, Four Color, by Dell... this book had to be one of the most frustrating titles to figure out in the 1970s, given that there was no large title on the cover that was consistent from issue to issue, and especially that the features varied from issue to issue! In some ways, it could be looked as a forerunner to DC's Showcase, in that some of the features spun off into their own titles eventually. There'll be all sorts of features presented on these covers, including some you may have never heard of before! It was the longest-running comic series of all time, so this will likely be the feature in By the 10s well into July!

More Marvel stuff this time around, beginning with these Marvel flashlights! More of 'em after the jump!

It's This 'n That Time Again!

Got a number of things to talk about this time, so let's get right to it!

ITEM! On Sunday, we had my son Tristan's sixth birthday party, and this time, we had a theme: Superheroes! At first, we considered asking the kids who were coming to arrive dressed as their favorite superhero, but then realize that might be asking a bit too much of the parents, so instead, we decided that when the kids arrived, they would be able to decorate a cape and mask! I'd prepared something like 24 capes in four different colors (black, red, pink and maroon) with Velcro fasteners, and we also had a bunch of background shapes (oval, comet, shield, and star) cut out of foam sheets with adhesive on the back, letters, and a bunch of other foam stickers to decorate the capes with, plus a bunch of face masks they could decorate with markers and stickers, as well. In the photo on the right, you can see Tristan wearing his mask and cape (although you can't see the cape very well -- he decorated it with a black comet -- tail pointing down, as did all the other kids, even though I thought the tail should point to the left -- a yellow "T" for Tristan, and a number of stars around it), and you can also see the Superman S-Shield cake I made for him! I was originally intending to do the cake decorating using fondant instead of frosting, but budget limitations got in the way... and I think it turned out nice anyway! Everyone was very impressed by it! Before the cake and ice cream, I grilled hot dogs and burgers for everyone, and we also had chips and watermelon. It went over pretty well!

ITEM! It is my sad duty to pass along the news that Reis O'Brien has decided to shut down his blog "Geek Orthodox," due to a combination of lack of free time to work on it, stress of daily production, and other factors that he discussed in length yesterday there. Reis' blog was always a pleasure to read, offering a unique perspective on a number of topics, and always featured some great stuff to check out! Geek Orthodox will be missed, and I hope that before he decides to delete it from Blogger entirely, he'll consider instead of just quitting it, to instead put it on indefinite hiatus in case the blogging bug bites him again!

ITEM! No real news on the schooling front from me... I met with my state caseworker today, and the only option to complete my training on schedule would mean transferring to Olympic College up in Shelton. The only real problem with this is logistics -- daughter Desi's daycare doesn't open until 7 a.m., and given the travel time involved, I wouldn't be able to have any class starting earlier than 9 a.m. -- on top of that, it would mean a lot of wasted gas if I wasn't able to get multiple classes scheduled for the same day. At this point, what I'm looking at is going to SPSCC in the Fall Quarter as planned to take the classes I've registered for, and then there'll be one five-credit course offered sometime the rest of the year that I'll hopefully be able to get into. The state may or may not pay for that class, since I wouldn't be able to attend full-time. Also, the last month or so of Fall Quarter, I'll likely have to look for some kind of job, since I won't be eligible for unemployment benefits once I'm not going to school full time. This would also mean that we'll have to pay for the remaining seven classes (one more during the 2010-2011 school year, six more in 2011-2012). It really sucks, and there doesn't seem to be any way around it, unless SPSCC ends up changing their mind again about the core classes. Unfortunately, that doesn't seem likely, and this also means that money will continue to be tight around here for a while.

ITEM! Some of you may have noticed a few changes over in the blogroll "Random Blogs of Geekery" -- a few weeks back, I went ahead and deleted a few blogs from the list that hadn't updated in over a month. I'm going to try to keep an eye on that in the future, and about once a month, I'll clear out blogs that are either abandoned, or are going way too long without new posts. Perhaps that's not entirely fair to those bloggers who aren't able to post very often, but I would rather keep the blogroll to blogs that are actively being updated.

ITEM! Here's some new things you can look forward to from me! First up, starting on June 1, the "Horror-Ble Humor Monster Cards" blog will be starting up. I believe I've written about it before (and no doubt will do so again), but basically it's my take on the classic (and not-so-classic) monster card sets of the past! Each day for about 72 days, there'll be a new card posted showing a still from a monster movie with what I hope is a funny caption! If you think you've got a funnier caption for the card than I have, leave it in the comments (along with your name). Around the first of September or so, I'll go over all the alternate gags submitted, and decide which ones I think are funnier than mine, and replace them! And then, as part of the Countdown to Halloween, I'll present the complete set of cards -- both front and back -- for you to check out here, plus I'll provide a link to high-resolution pictures you can download in case you want to print out your own set!

Now, here at the Random Acts of Geekery, you can also look forward to some additional features... starting in September, in an effort to do more writing on this blog and get more comics content, I'll be featuring "Retro-Reviews!" This will feature reviews of old comic books, accompanied with panels as appropriate. At least the first few of these will be multiple parts, as I've chosen some anthology titles to begin with, so each part will review one story from the issue until I've gone through the entire issue. I'm planning to have some done-in-one installments as I go, too, but I do want to make sure I'm able to cover these stories in the proper detail.

Then, in October, of course, it'll be the Countdown to Halloween again, my fourth year in a row of participation! The monster cards will return for that, and "Original Comic Art" will switch to art from monster/horror/mystery comics for that month.

Coming in November, "The Way of the Geek" will begin, where I'll be interviewing my fellow geek bloggers! If you haven't been approached by me to participate in that, scroll up to the top of this blog (after you've caught up with the current posts, naturally), and in the upper left-hand corner, under "Pages," you'll find a link to a page that tells you how you can be part of it!

Also starting in November will be another new feature, "Fandom Library!" This new feature will present stuff that's long out of print that I think would be of interest to you guys... complete in one installment! This will likely be a weekly feature.

Once I've run out of material for Saturday's "Movie of the Week" feature, that will be replaced by "Geek TV," which will be a weekly look at television shows that I think geeks are interested in, even if they don't seem to have an immediate geek connection. I'm planning to discuss classic as well as current programs, and in the event that you're not that familiar with the show I'm writing about, I hope that I'll be able to give you enough info to help decide whether or not you want to seek that one out for yourself!

As you can see, I've got lots of plans for this here blog, and I've had no difficulty working far enough ahead on it that I can take a break as needed (as I'm writing this, I've already got all the October posts done except for the "Horror-Ble Humor Cards" posts, and am getting ready to start on November).

So far as my other blogs go... well, some of them may be coming to a close by the end of this year, due to my running out of material for them, while others are good to go through 2011, and others fall somewhere in between those. I have been considering the idea of doing "mini-series" blogs, which would be a blog that features a specific character intended to run for a limited time. I'm also considering perhaps some blogs that would run a bit longer... I may consider just throwing out some ideas and seeing what you guys would be interested in seeing come about!

And that's about it for now!

Time for another Crestwood House book on our Wednesday monster feature! "Werewolf of London" was part of the second series of "Movie Monsters" books, which are convenient for me, because a two-page spread will fit on my scanner... unfortunately, chapters would start in the middle of a page sometimes, so as I present each chapter, they will (after the first one) begin with part of the previous chapter, and conclude with part of the next chapter!

Here's the cover, and more after the jump!

Dog of the Geek: Deputy Dawg! 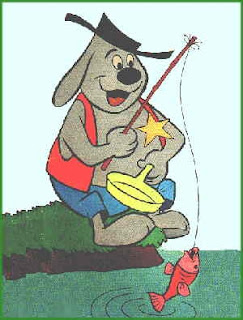 Biography: It's unknown how Deputy Dawg became the deputy of the town he lives in.

Group Affiliation: Whatever law enforcement force he's a deputy in.

First in the Marvel parade of goodies is this 1970s Captain Marvel poster! More after the jump!

Heartbreak galore on this By the 10s featuring Falling in Love!

This week's first item for your consideration is this poster for Tarantula! More from this movie, and other stuff, after the jump!

Random Videos of Geekery: Superboy in "The Black Knight"!