We're just getting into the D stuff, having exhausted the DC items... so this time around, we begin with Destination Moon goodies! More after the jump!

Movie of the Week: One Million Years B.C.!

Apparently, things don't always go as placed at the Disney TV Studio -- we'll see what the Three Little Pigs are up to after the jump!

By the 10s: Looney Tunes and Merrie Melodies, Part 1!

Well, after all those romance comics on By the 10s, this should come as a palate-cleanser, shouldn't it?

Here's issue 10 of Looney Tunes and Merrie Melodies, with more after the jump!

Yep, it's time for another pair of Popeyes!

Time for the Vampires chapter!

Dog of the Geek: Fauntleroy Fox! 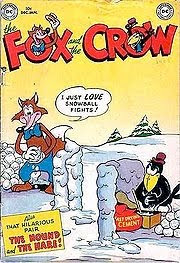 First item up this time (that could well be sending some of you off to eBay in search of it) is this set of Aquaman Underoos! More after the jump!

This time around, Monster Monday is probably all about Frankenstein, beginning with this 3-D card from Aurora, utilizing one of their Frankenstein models! More after the jump!

Yes, it does indeed begin... but it continues after the jump!

This go-round, we'll start with Beneath the Planet of the Apes stuff, and see where we go from there!

Here's one still... or was it a lobby card? More after the jump!