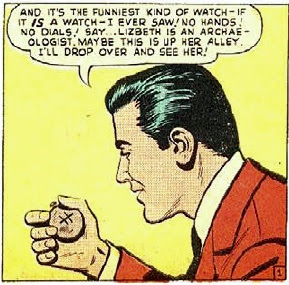 The next story in Amazing Adventures #1 is “A-Day” (art by Ogden Whitney)! It begins when Bob Johnson finds a strange watch in his home when he comes home from a late U.N. Committee meeting. The watch is odd, to say the least, and Bob decides to take it to Elizabeth, an archaeologist, to see if she can figure it out! He arrives at Elizabeth's apartment, and she thinks someone's playing a trick on Bob, so she offers him a drink. As she's preparing the drinks, a little man appears in a puff of smoke in place of the watch, and tells Bob that he's here to get Bob to do what he cannot – bring peace to the world! Apparently, since Bob is attache to the American staff of the UN, he can do this. Oh, the little guy? He's Kan Dal, a member of a race that lived on Atlantis and were subsequently destroyed by the very thing that threatens Bob's civilization!

Kan Dal tells Bob that the atomic bombs the nations of the world are arming themselves with will smash mankind, and he asks Bob and Elizabeth to come with him! Strangely, they agree! Guess they figured they were already in for weirdness as it was! 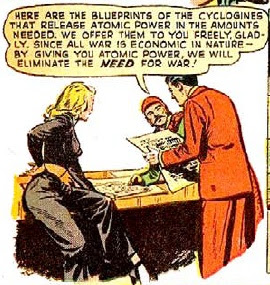 Kan Dal then points a small object from his belt at them, and the couple shrink down before suddenly teleporting away! They arrive in a large laboratory deep beneath the Atlantic Ocean. Kan Dal shows them on a visiscreen how Atlantis was destroyed by atom bombs by Mu, a rival empire in the Pacific. The surviving Atlanteans used atomic power to build a gigantic domed city and sank it beneath the waves, their own atomic bombers destroying Mu. When their scientists detected atomic radiation on the surface, they sent flying saucers to investigate, and have now decided to offer the one solution to war!

The solution is atomic power, which makes the Atlanteans' food and clothes, warms and shelters them, and powers their vessels. They give the blueprints to Bob as Kan Dal further extolls the virtues of atomic power. 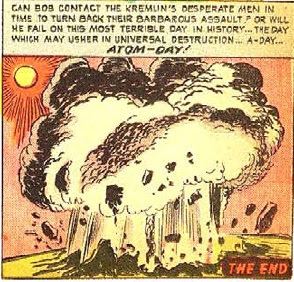 Unfortunately, bad news is received – dictator bombers have been detected, and unless they turn back in 20 minutes, the US will have to retaliate! Kan Dal realizes that the free people won't allow themselves to be enslaved without a fight, which will leave the world a furnace of blazing hydrogen bombs, destroying Atlantis as well! Elizabeth begs Kan Dal for a solution to stop the madness, and Kan Dal offers the use of a videophone. Bob tries to contact the Kremlin and Stalin to convince the USSR to turn their planes back, but... will he be in time?

I know I'd already posted Count Yorga as the movie of the week before, but since I was up to the sequel, I figured I'd repost that with the sequel stuff... meaning you get two trailers this time!

Sequel trailer and more after the jump! 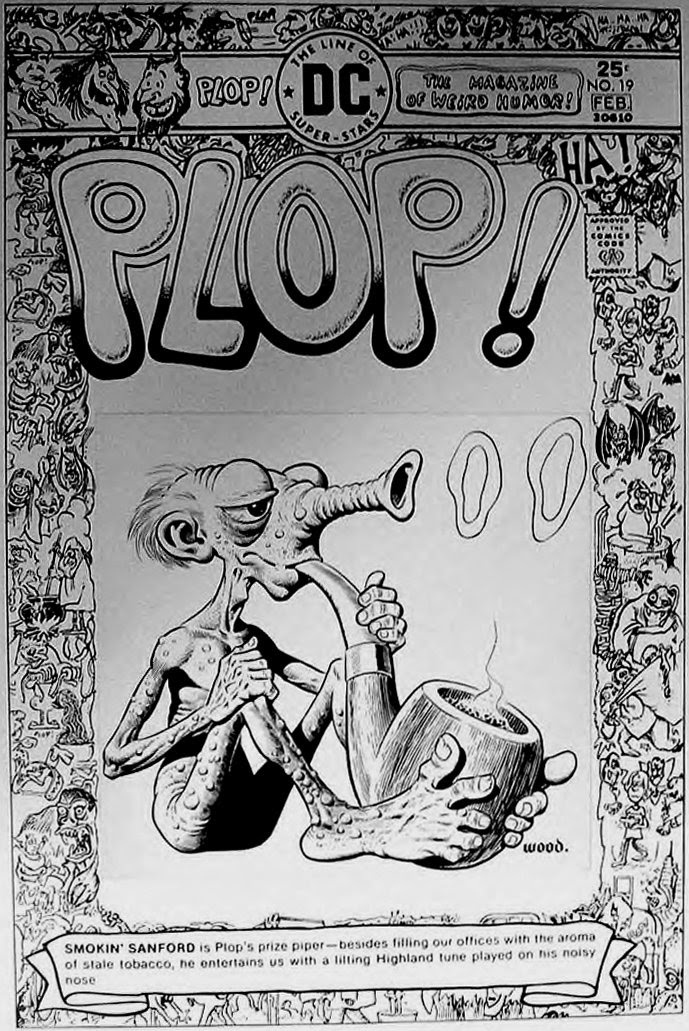 Hey, I promised a Plop! cover, didn't I? This one is by Wally Wood (weird dude) and Sergio Aragones (frame)! More comic art after the jump!

For your viewing enjoyment, here's a 15-minute or so video summary of our Disneyland vacation, which I just finished assembling last night!

And we've got quite a bit of Star Trek stuff to look at today, if I'm not mistaken! First up is this Star Trek greeting card from the 1970s: 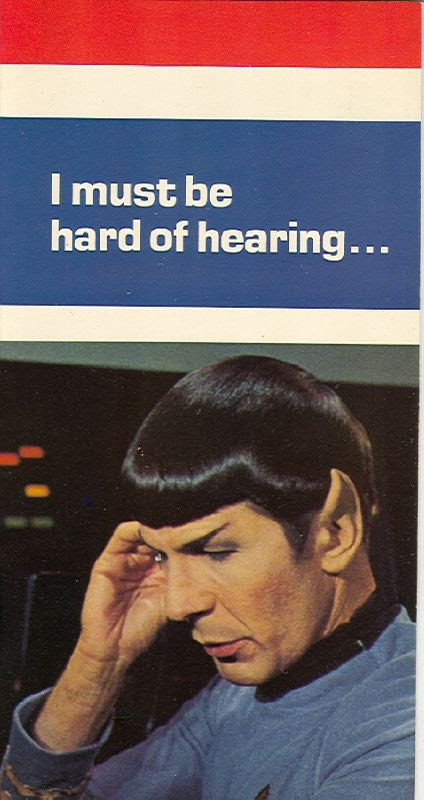 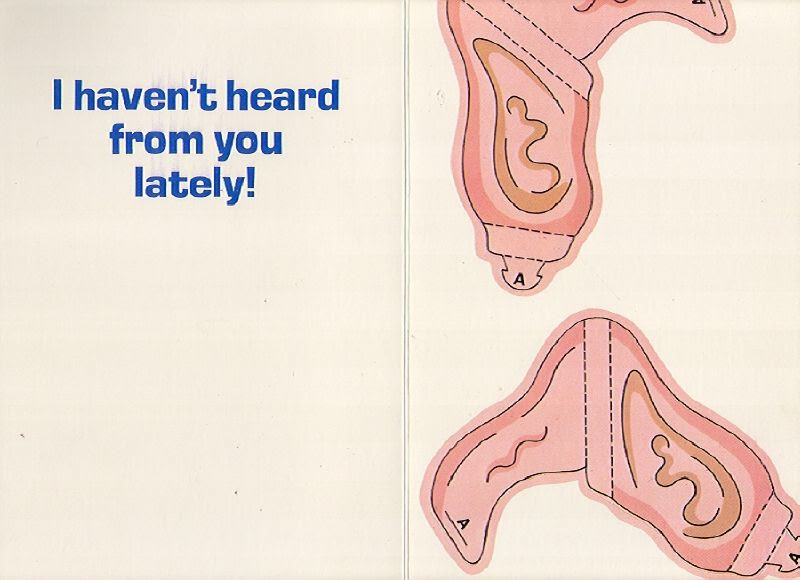 Ah, the height of Star Trek merchandising! There were several cards like this, with punch-out items that you could make into Star Trek things... more after the jump!

Next week, it's another Chad Valley set, featuring... Stingray!

Random Videos of Geekery: Peter Potamus in "Lion Around"!

Time to check on Major Matt Mason and company! 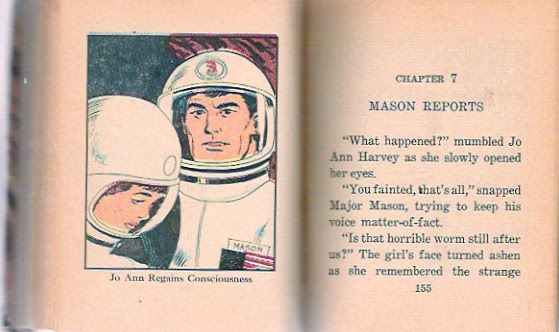 Porky Pig gets the By the 10s treatment this time! Unfortunately, issues 10 and 20 were part of the Four Color Comics line, and I haven't been able to figure out which ones those would be (the Grand Comics Database usually has such info available, but this time it's lacking). Therefore, we begin with... 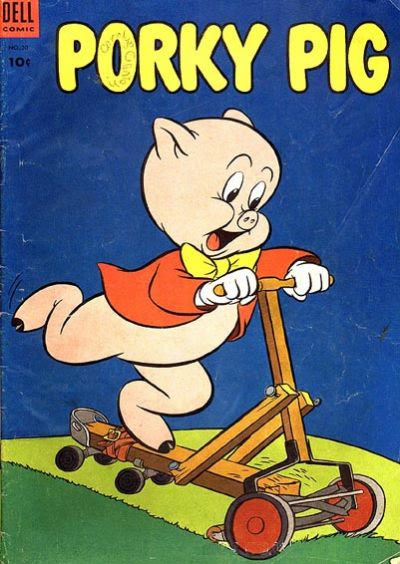 Issue 30! More after the jump! 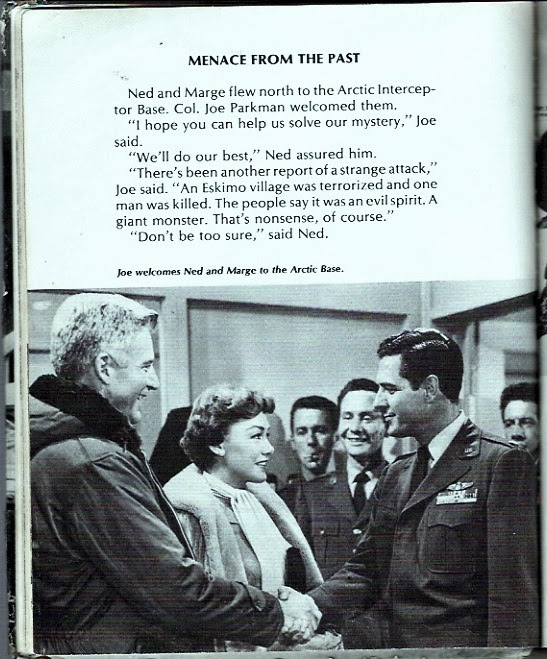 Dog of the Geek: Pluto!

Breed: Generic
Original Appearances: Walt Disney cartoons, beginning with “The Chain Gang” (1930)
Other Appearances: All kinds of merchandise, comic books, TV shows, etc.!
Biography: Most often cast as Mickey Mouse's pet dog, Pluto is a rarity in Disney cartoons... a dog that is treated as a dog, and not as a person (as Goofy is). He's credited as being one of the first cartoon characters that is shown to have thought processes through the use of character animation.
Powers: None, unless you count the aggressive stick-to-it attitude that Pluto is shown to have, going after his goals no matter what gets in his way (most of the time, anyway).
Group Affiliation: Not named per se, but Pluto had a group of friends in some of his solo cartoons that included Fifi the Peke, Dinah the Dachshund, and Ronnie the St. Bernard puppy.
Miscellaneous: In “The Chain Gang,” Pluto is not named at all, and in “The Picnic” (1930), he's called “Rover.” It was in “The Moose Hunt” (1931) that he's given the name “Pluto the Pup.” 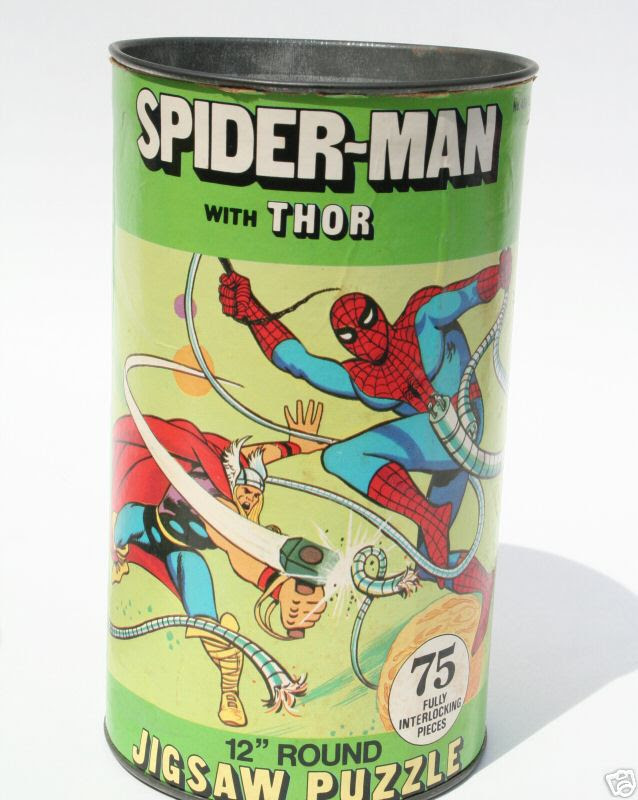 It's Monster Monday again, and this time around, we're starting with some King Kong stuff! 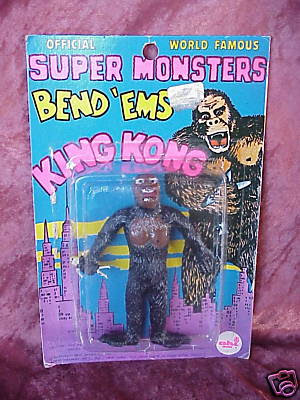 AHI's King Kong bendy is pretty crude, isn't it? More after the jump!

Welcome to the first installment of the newest feature here at the Random Acts of Geekery, Retro-Reviews! In this feature, I'll be looking at an old comic book and writing my thoughts about the stories, which will include plot summaries and critiques. It's my way of getting more comics content into this blog! 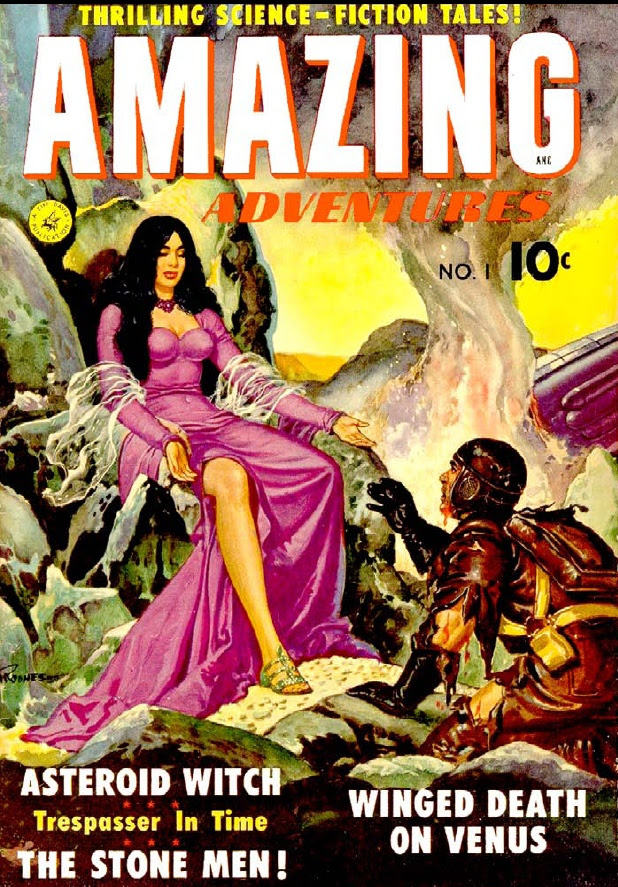 The original Amazing Adventures title was an anthology book, so there's several different features to talk about! First of all, there's the inside front cover feature, “Amazing Facts From Nature”! According to this one-pager (done in black and yellow): The deerfly has been clocked at 800 miles per hour; a flock of wild geese raced the 20th Century Limited and won, even though the train was going 85 miles per hour; the European swift migrates 1500 miles from Europe to Africa in seven hours (more than 200 miles per hour); an ordinary flea can lift 150 times its own weight and pull 300 times it own weight; and that salmon can swim against the current at 30 miles per hour, and leap 15 feet into the air in hurdling a waterfall! 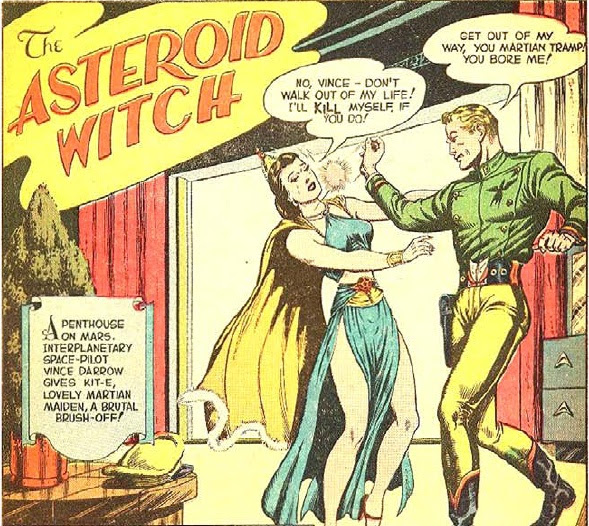 The first full-fledged story in this issue is “The Asteroid Witch,” (with art by Murphy Anderson) starring Interplanetary Space-Pilot Vince Darrow! The tale opens when Vince is bitch-slapping Kit-E, a lovely Martian maiden, who has apparently bored him. As Vince walks away, he complains about how women on every planet eventually turn into demanding hags, but then he realizes that Kit-E has jumped to her death, as she threatened to do just before Vince slapped her!

Vince takes it in stride, however, and finds himself into a crowded bar, where he orders a Rocketini, and as he drinks it, he thinks, “Somewhere in this universe there must be a woman of unendurable allure who is truly unconquerable!”

Coincidently enough, Vince overhears two spacers talking about The Asteroid Witch, who is sort of a space siren, and the reason why all space ships are routed around the area in which she can be found. As Vince listens to one spacer talk about his encounter with the Asteroid Witch, he decides that he must meet her, at any cost! Vince heads to the space-port and steals the rocket ship that he's employed to pilot. The Interplanetary Patrol is alerted to his theft, and they attempt to warn him away from the forbidden area! 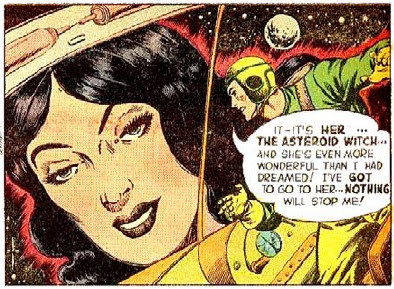 Vince comes to his senses and prepares to surrender to the IP, but then the Asteroid Witch appears on his viewscreen, and he decides to battle the IP, breaking through into the forbidden area! The IP decides he's doomed, and don't follow him as Vince follows the Asteroid Witch through the void. Vince crashes his space-liner on the asteroid she lives on, and makes his way to the Asteroid Witch! She taunts him, calling him closer and closer so she can kiss him... and then she is interrupted by Kit-E, who only faked her death! Pointing her atom-blast pistol at the Asteroid Witch, Kit-E forces the space siren to flee the universe!

As the Asteroid Witch flies off into space, Vince begs Kit-E to forgive him, which she does, and then she tells Vince to look up into space, where they see the Asteroid Witch explode! It turns out that Kit-E wasn't holding an atom-blast pistol, but a dimension gun with an invisible beam that was slow-acting, and that the Asteroid Witch is now living in the fifth or eighth dimension! And of course, now everything is all hunky-dory between Vince and Kit-E, and they'll live happily ever after.

The moral of the story would seem to be... go ahead and smack around the woman who truly loves you, because she'll just fake her death and then save your life in return! 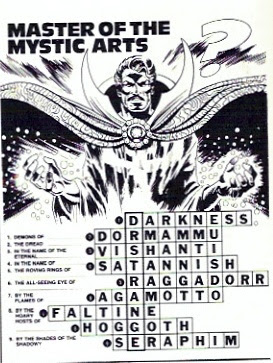 Let's see what's developing on the moon, shall we? 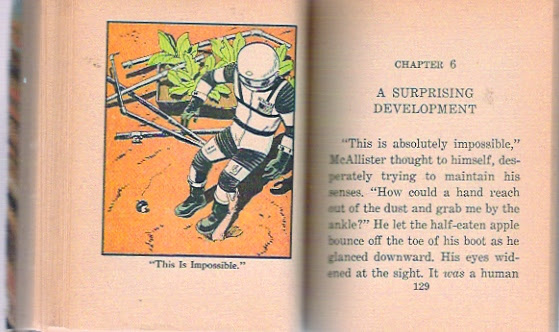