Movie of the Week: The Return of Dracula!

I'm sure you know the drill by now... trailer here, posters and such after the jump!

By the 10s: Romantic Story!

Here's a title that started at Fawcett, and then went to Charlton... Romantic Story! Issue 10's missing from the Grand Comics Database, so we'll begin with... 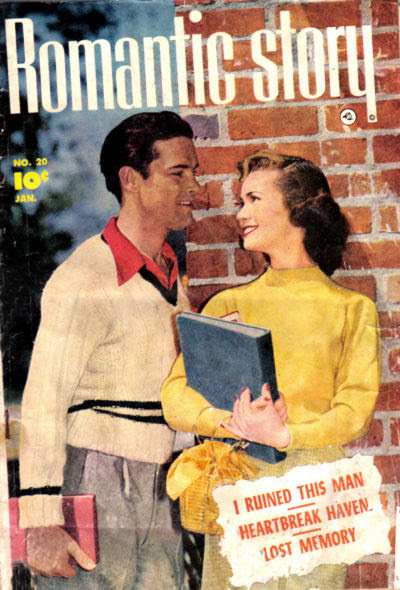 Checking in on Major Matt Mason and his crew... 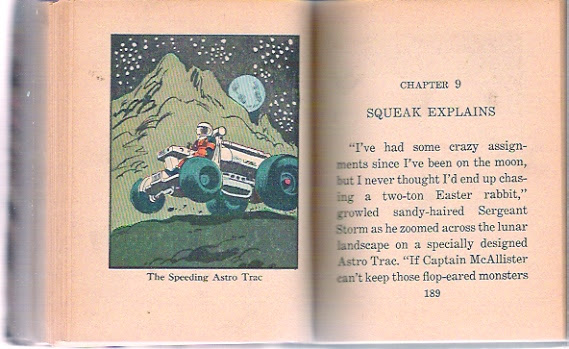 Harlan Ellison's First Typewriter is Up For Sale!

Tony Isabella alerted me a few days ago that Harlan Ellison's first typewriter is up for sale! Read all about it here!
Posted by Jon K at 12:01 AM No comments:

One more round of Superman items? You betcha! And a few more things after that! 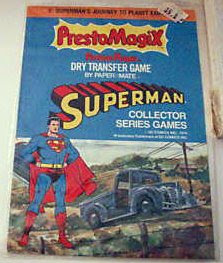 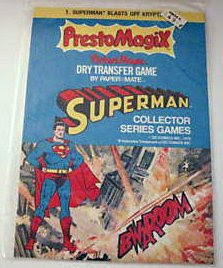 Here's two of the PrestoMagix sets... they were kind of like a combination of temporary tattoos and Colorforms! More after the jump!

Dog of the Geek: Spike and Tyke! 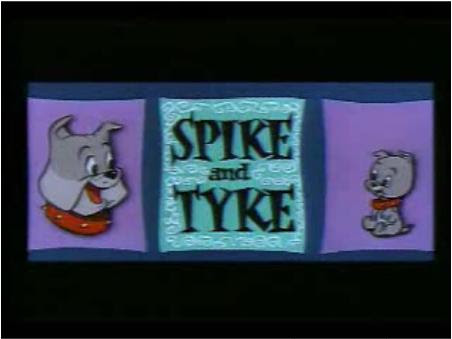 Breed: Bulldog
Original Appearances: Tom and Jerry cartoons, beginning with “Love That Pup” (1949), as well as two cartoons featuring just the two dogs, “Give and Tyke” and “Scat Cat” (both 1957)
Other Appearances: Just about any medium that Tom and Jerry appeared in, Spike and Tyke would usually be present!
Biography: Devoted father Spike was always very protective of his son, Tyke! Spike does not like cats, but usually has a soft spot for mice. He's also very possessive of his bones. Spike didn't always appear with his son in the Tom and Jerry cartoons, and was sometimes featured as the antagonist.
Powers: Standard cartoon character ability to recover from physical harm.
Group Affiliation: None
Miscellaneous: Spike was also called “Killer” and “Butch” in some early appearances. When Tyke was introduced as Spike's son in the Tom and Jerry cartons, Daws Butler took over the voicing duties, making the voice very similar to Jimmy Durante. Later, when Hanna-Barbera formed their own studio for producing cartoons for television, Spike and Tyke were very much an influence on Auggie Doggie and Doggie Daddy! MGM had another character named Spike who appeared in the Droopy cartoons, who was not to be mistaken for this Spike, even if they were more or less combined into one character in the 1980s “Tom and Jerry Comedy Show”! 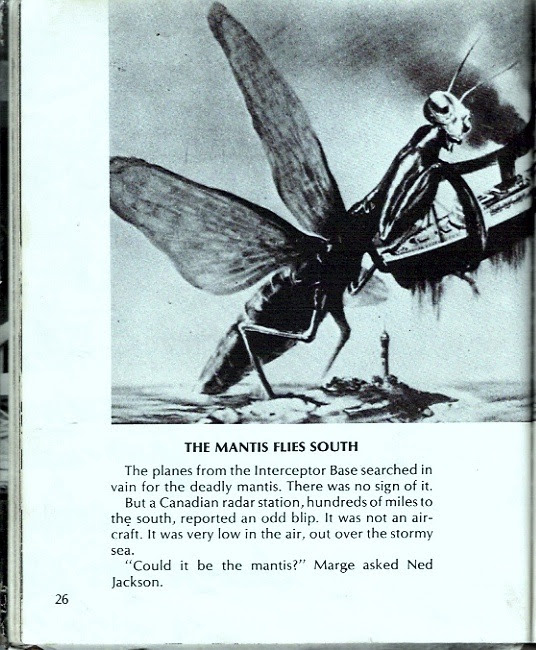 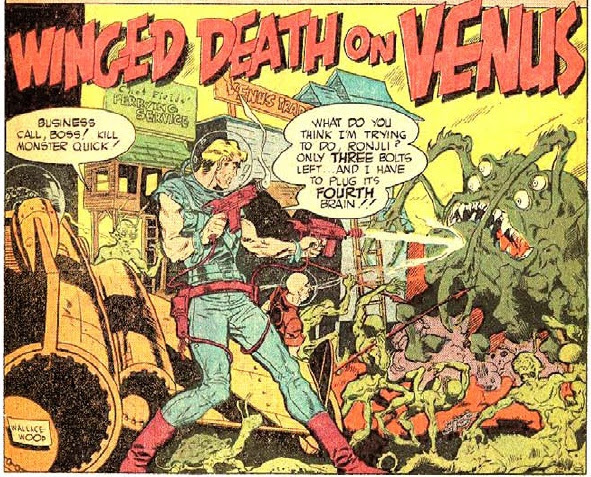 Next up, it's “Winged Death on Venus,” which is signed by Wally Wood! It opens with Chet Fields, who owns a small rocket ship ferrying supplies and passengers to and from the occasional space yachts “anchoring” in the upper atmosphere of Venus, shooting it out with a horrible space monster while his aide, Ronjli (a Venusian Ant Man) tells him a call is coming in for him! Chet finishes off the monster, and then takes the call. The call is from Wagner Duprey, who wants to hire Chet to ferry him to Venus and organize a hunting expedition. When Chet arrives at Duprey's space yacht, he discovers an attractive woman, Wagner's niece, is also going with them. He's against the idea until Wagner offers to double Chet's pay. Chet then goes to outfit Wagner and his niece, and as he's talking over the situation with the store owner, in walks the niece, and tempers flare between the duo! (Not having finished reading the story at this point, I'm betting the two end up falling in love with each other)

Accompanied by a band of Venusians, Chet, Wagner, and Magda (finally named on the third page) proceed on their expedition into the Venus jungle! During the first three days, Chet warns them of the danger, and Magda of course ignores him, getting into trouble. Eventually, the party arrives in “sabre-tooth territory,” where Chet prepares a camp of a treetop house fortified with steel spikes. The instant darkness falls, sabre-tooths try to attack the camp! Wagner assures Chet that he's the boss on this trip, while Magda is distracted by a very large butterfly on the wall. She starts to reach for it, but Wagner dives at her and pushes her out of the way! Chet asks Wagner how he knew it was a darterfly, and Wagner claims he'd read about it – even though it had just barely been discovered a short time ago!
The party goes deeper into the jungle, and find tracks of the Venusian wolf, which Wagner doesn't recognize (even though the wolves are much better known than the darterfly). They track the wolf, using a fire wall to keep it at bay, and Wagner gets his opportunity to shoot the wolf, scoring a direct hit. Wagner's still not content, though, and wants to press onward. One of the Ant Men warn that the party is nearing the Winged People's territory, and since the Ant Men won't go any further into Winged territoriy, Wagner insists they continue without the Ant Men porters.

Chet isn't happy about the idea, but Magda (who's somehow become enamored of Chet) talks him him into it. The party nears the Winged City, and they are set upon by some of the Winged People and captured! Chet tries to convince the leader to let them go, but the chief tells them that 30 years ago, an Earthman was released when captured, and that Earthman stoe their sacred jewel eye of Anacinth! The humans are tossed into a cell, and Wagner says he got out of this prison once, and he can do it again! 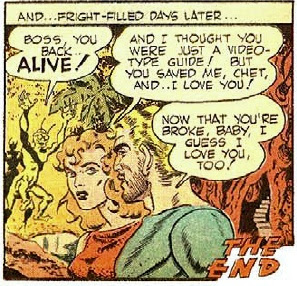 Yes, that's right, Wagner was the person who stole the idol's eye 30 years ago, and built his fortune on its sale. But he's almost broke, so he concocted this scheme to steal the second eye to rebuild his fortune. Suddenly, a Winged Person launches himself at Wagner in an attempt to kill him, but is instead captured by Chet and Wagner. They use the Winged Person's lasso to escape from their cell, but when Chet and Magda try to leave the city, they notice that Wagner's still hoping to steal the other sacred eye! They try to stop him, but Wagner ends up succumbing to a hidden death ray. Chet discovers the Winged People don't really have wings, but instead wear vests with wings on them, so they disguise themselves and walk right out of the city. Of course, as I predicted, Chet and Magda end the story having fallen in love!

Next: "Trespasser in Time," the final story of this comic! 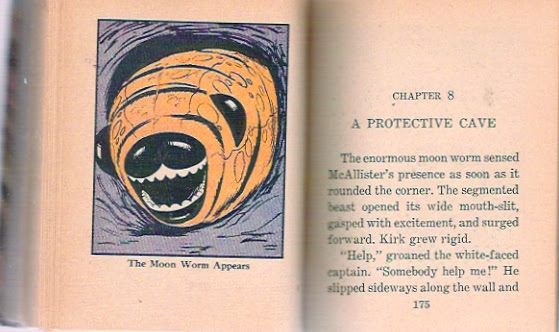 Well, after last week's nearly All-Kong Edition, some variety would seem to be in order, eh? 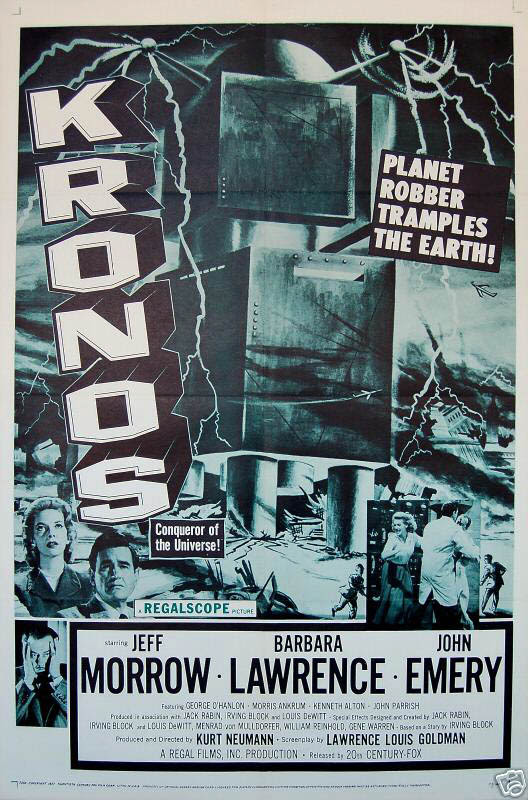 First up this week is this poster for Kronos, which is close enough to a monster movie for me! More monsters after the jump!

Should be all-Superman this time around! 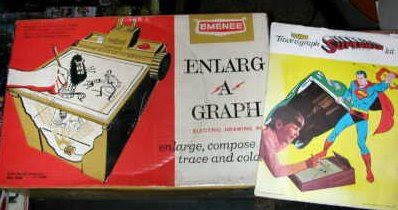 First up is this 1966 Enlarge-O-Graph... naw, that couldn't have influenced any artists to do a lot of swiping, could it? More stuff after the jump! 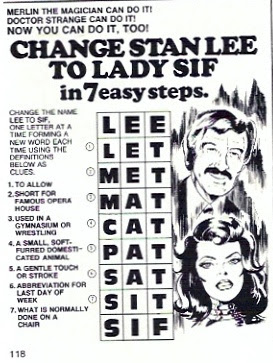 Time for a By the 10s installment, with a title that changed! It begins with Hap Hazard! 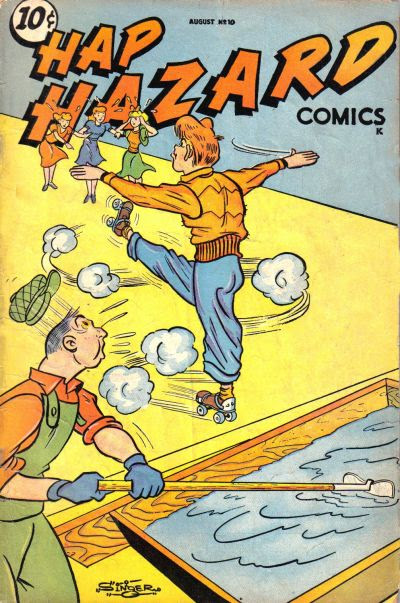 Issue 10! The rest after the jump!