At long last, the wait is over! 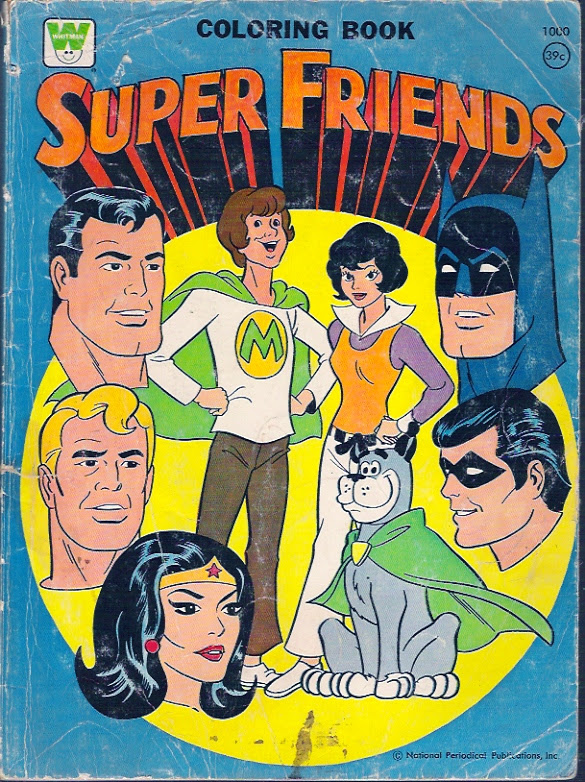 Yes, it's finally time for me to post the Super Friends coloring book! I think we'll be looking at about 20 pages per installment, so we should get through this one this month!

Countdown to Halloween: Movie of the Week - Rodan! 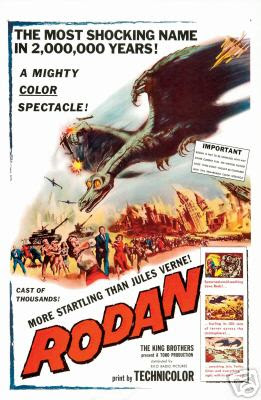 Let's see what ads we're looking at this time around! 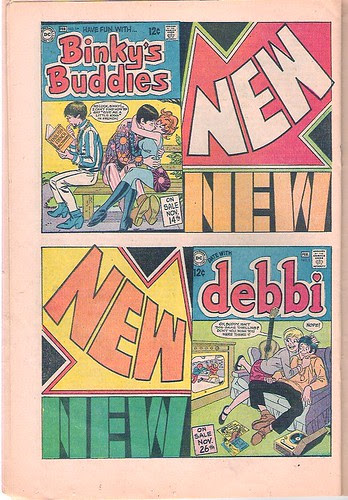 Ah, another pair of house ads from DC's January, 1969 cover-dated books! Looks like Binky's Buddies #1 and Date With Debbi #1! Well, the first of those series lasted a whopping 12 issues on a bimonthly schedule, while Date with Debbi actually managed 18 issues on a bi-monthly basis!

Just how many monster cards do I have to show you? Lots more! 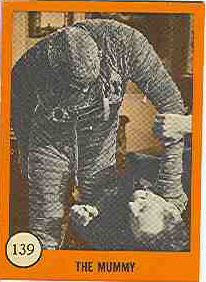 Here's the first four slides from this set! 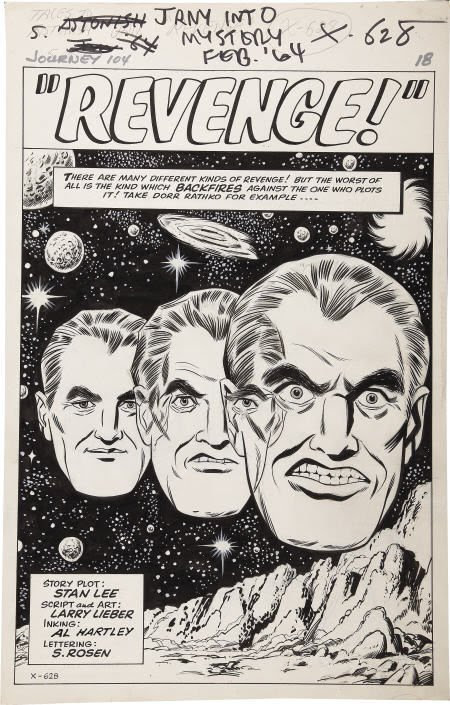 First up, here's page 18 from Journey into Mystery #104, by Larry Lieber! More after the jump!

Any Volunteers to Help With a School Assignment?

This quarter, one of the classes I'm taking is Medical Billing and Coding, which basically means I'm learning how to submit payment claims to insurance companies.

I have one research project to do for this class, which is to interview a couple of people about their own health insurance. If you live in the US, and have medical insurance, let me know if you'd be interested in participating. All personal information will be kept confidential -- I'll be referring to my interviewees as "Patient 1," "Patient 2," etc.

Here's the questions that I'm supposed to ask:

What is the medical insurance?
Who files the claim? (i.e., do you file the claim to the insurance company, or does your healthcare provider)
Does their employer pay their premium or a portion of the premium? If so, what percentage do they pay?
Do they have a copayment, coinsurance, or deductible?
Do they have more than one insurance plan?
Do they know the limitations of their policy? (i.e., maximum coverage per year, that kind of thing)
Have they ever had any problems with their insurance?
If they have Medicare, do they have a supplemental policy?
If they had a chance to change insurers, would they?
What would they like to see covered that currently is not?

If you want to help me out with this, you can shoot me an email at waffyjon at comcast dot net with your answers (please copy and paste the above questions so I don't mix up what question you're answering)... and thanks in advance!

As mentioned at the end of last month, this October's Wednesday monster mag/book reviews goes into high gear, with each week providing you with a complete magazine or book! This time around, it's the classic Famous Monsters #1! 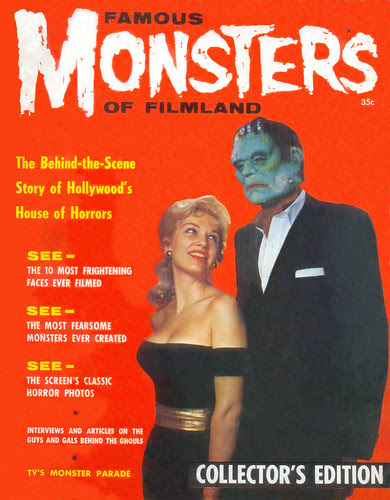 If I recall correctly, the gentleman in the Frankenstein Monster mask on this cover was none other than Jim Warren himself! To start reading this epochal first issue, simply click...

Well, I hope there'll be more than just Hulk stuff this time around... let's see! First item to check out today is this Hulk game cloth from 1979! Cool idea... coloring mat and games in one! More when you click
Click for more ->
Posted by Jon K at 12:01 AM No comments:

Countdown to Halloween: Retro-Review - Adventures Into the Unknown #1, Part 2! 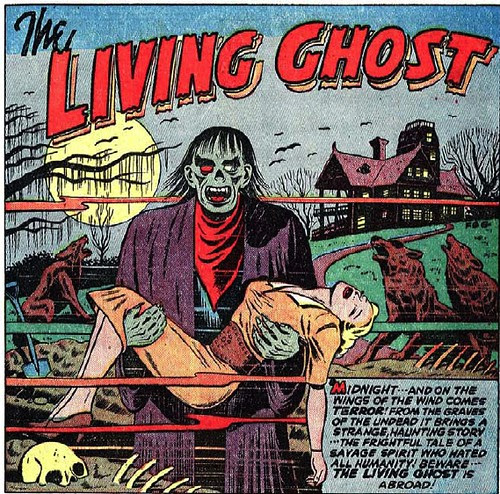 The second story in this book is “The Living Ghost,” a 12-pager by Fred Guardineer.

The first anyone sees of the Living Ghost is at a switching tower, when the operator is attacked by the Living Ghost! With the switchman dead, the Living Ghost causes two trains to crash together! Shortly afterward, at the Daily Bugle, Gail Leslie, a reporter, is assigned to cover the story of the train crash, and when she arrives on the scene, she meets up with Tony Brand, the DA's special investigator! 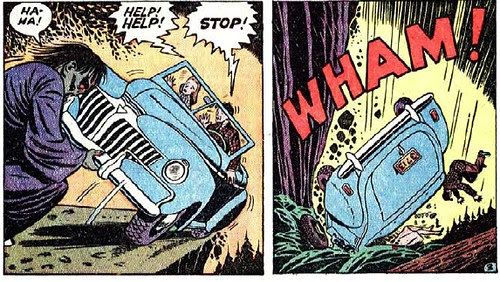 Brand shows Gail the body of the switchman, and tells her the man was strangled. This causes Gail to react like women typically react in these stories, so Brand tells her to take off, this isn't a woman's business, but that he'll find the killer! The next night, however, at a local lover's lane, two teenagers, Jean and Ned, are acting like no teenager in real life ever has, with likes like “Golly, Jean, you're the cutest girl I ever knew!” But then, the Living Ghost attacks!

As you can see above, Gail and Brand are on the scene to investigate, and Gail mentions smelling gunpowder again (the first time she mentions it, it's not entirely clear if she was actually smelling gunpowder, or if she was using the phrase much like saying “I smell a rat”). But she then decides maybe it's brimstone she smells, but Brand says she's crazy for thinking that. However, he does invite her out to go dancing that evening, which she accepts. Gail then wanders around the scene, and finds a footprint of a cloven hoof! She follows the hoofprints to a cave, which happens to be the lair of the Living Ghost! She leaves before the Ghost decides to attack her, but later, at her apartment... 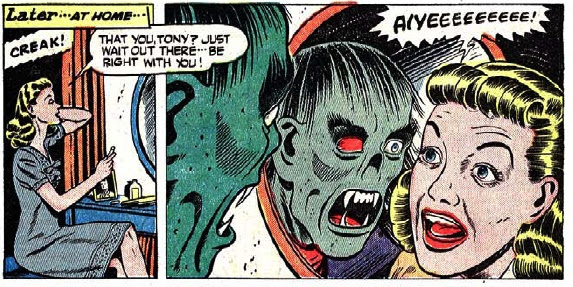 The Living Ghost introduces himself, and tells Gail it would've been easy to kill her in the cave, but he decided she was too beautiful, so he decided to follow her home, and now he's decided to make her his! He picks her up and leaps out of the window, flying her away with him!

Brand arrives at the trashed apartment, sees the words “The Living Ghost” written on the wall, and then finds something that really shakes him up... “A face so terrible that it's etched itself into the mirror. A – a face that's out of the grave!” This convinces him that the supernatural does exist. Having become a believer, he figures out where he needs to go for advice: 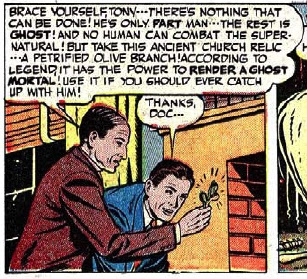 So, the Doc tells Tony the rest of the legend of the Living Ghost, and that once per century he walks the world again, and that it's time! Tony asks what he can do, and he's told... well, it's best just to show you -->


In the meantime, the Living Ghost has brought Gail to his cave, where he tells her that Gail will join him in the legion of the undead... as his queen! Of course, Gail is not interested in this, and pushes him away. So the Living Ghost decides to demonstrate his powers! Casting a spell, the Living Ghosts call upon... The Hosts of Age-Old Evil, which you really have to see to believe, but I'll just show you two of the panels below: 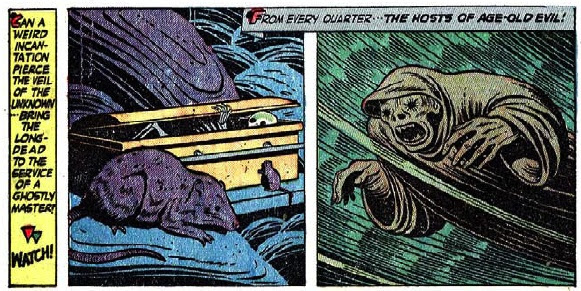 Meanwhile, Tony is searching the scene of the last murder when he sees a trio of the undead shambling past him! Well, Tony calls them “specters – inhuman!” Anyway, he follows them secretly to the Living Ghost's cave, where he sees the Legion of the Condemmed approach the Living Ghost and Gail! Tony thinks quickly, and puts a coating of mud over himself to disguise himself as one of the undead in order to infiltrate the cave.

Yes, that's right, a coating of mud. And considering that it worked, I guess you'd have to say that the Living Ghost and his undead legion aren't the brightest bulbs in the chandelier! Tony comes up behind Gail and reveals to her that it's him in disguise (yes, that's right, Gail, a reporter, is not observant enough to tell that Tony is not an undead person thanks to the coating of mud). He tells Gail his plan, and she tells the Living Ghost that she'll rule with him, if he'll only get rid of the “awful creatures!” The Living Ghost sends them away, and then notices that Tony is still there – and finally sees through his disguise! The Living Ghost says, “You fools – thinking that you culd fight a superhuman power! There's only one answer – death!” But Tony has an ace up his sleeve... or rather, a petrified olive branch!

Despite the fact that the now-mortal Living Ghost looks to be about 10 feet tall, Tony punches the Living Ghost in the nose, but the Ghost responds by grabbing Tony's neck in his hands and forces him to the floor of the cave! Gail grabs a football-sized rock and hits the Ghost in the back of the head, giving Tony a reprieve while the Ghost attacks Gail. This galvanizes Tony into action, giving him apparently superhuman strength!

Bizarrely enough, the police do manage to apprehend him, and the Living Ghost is sentenced to the electric chair (sadly, we don't get to see the trial itself), but, when the switch is thrown, the Living Ghost vanishes instead! Gail and Tony hear the news on the radio.

So, an interesting concept, isn't it? A continuing character in a horror comic book, with mere mortals going after him? Aside from Dick Briefer's Frankenstein and Marv Wolfman's Tomb of Dracula, I'm not sure that there were any other examples of this (unless one counts The Claw).

Next time: “It Walked By Night”!

Hope you guys are enjoying this parade! 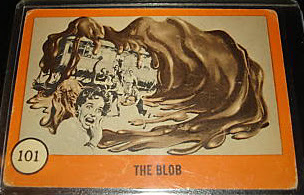 By the 10s: Teen Confessions!

I really should've mixed things up much more, so there wouldn't be such an onslaught of romance comics, eh? 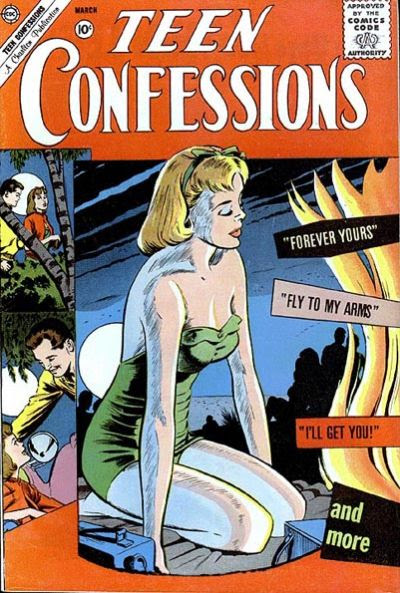 Issue 10, with more after the jump!

Time for another installment of Monster Monday for this Halloween month! 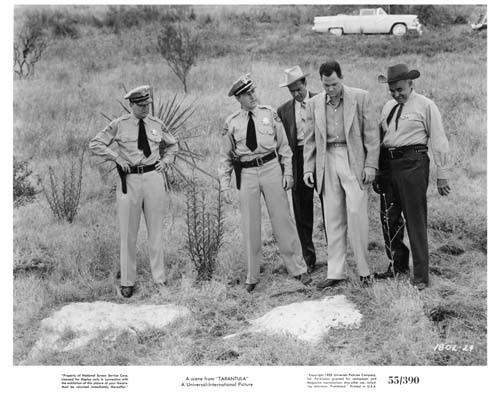 And this installment begins with some stills from Tarantula! The above one doesn't feature the titular monster, but there's more...

Last installment for this one! 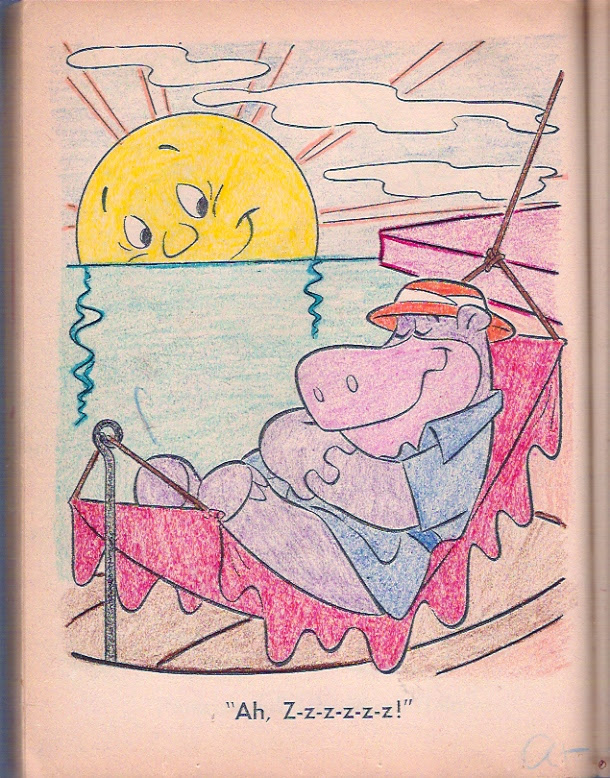 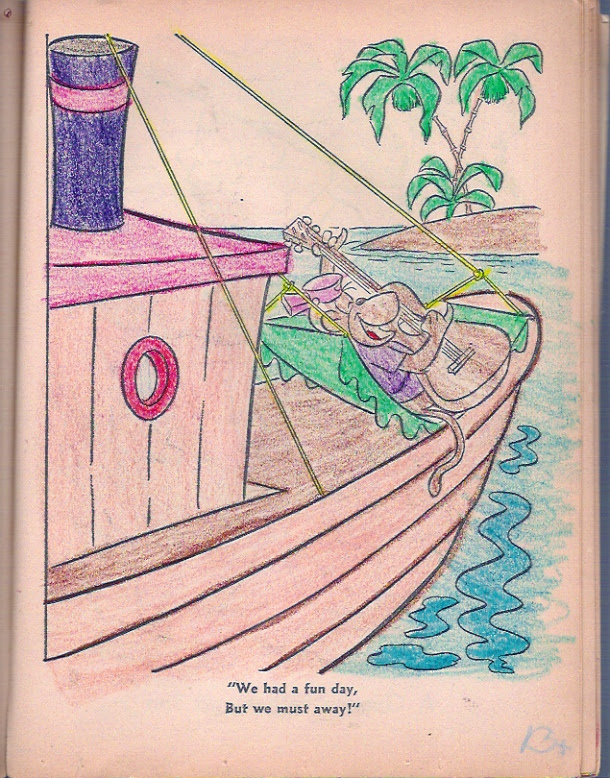 Time for another look at some comic book ads from the past! 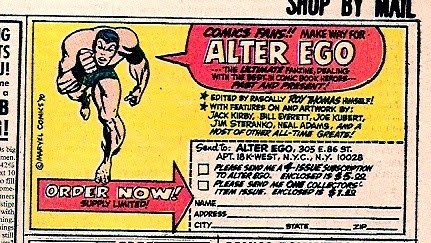 And the first ad this time around comes from the January, 1970 cover-dated Marvels, and as you can see, it's an ad for the original version of Alter Ego! Now, I'm sure most of you probably know the basics of Alter Ego's history, but I'll give you a brief summary after the jump! 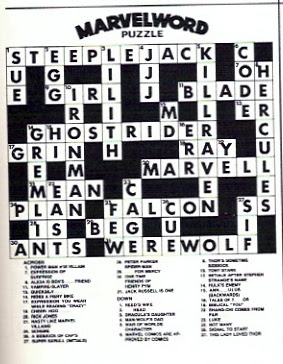 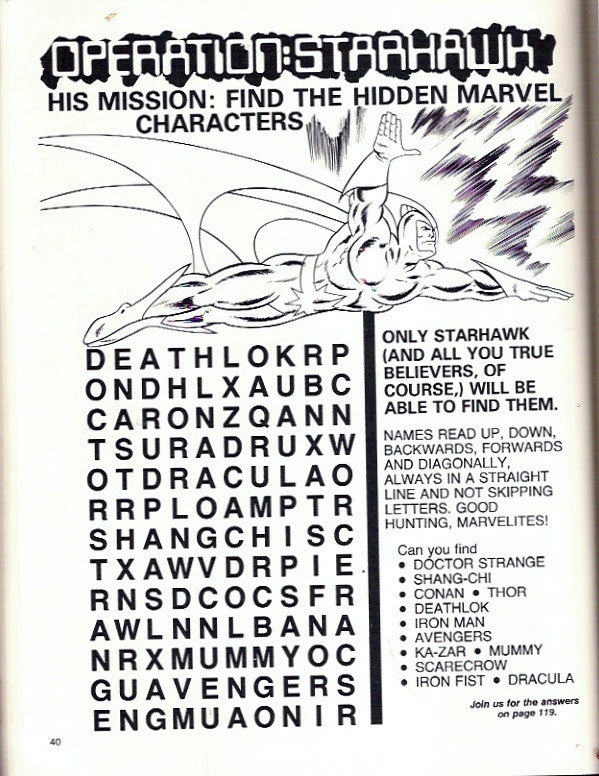