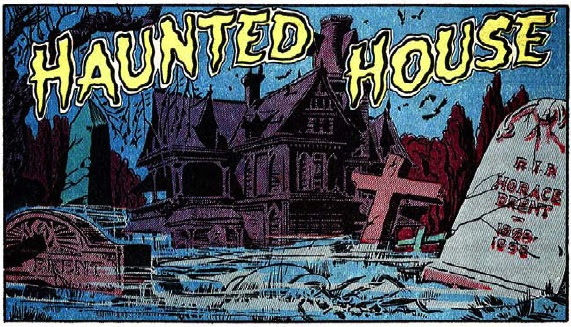 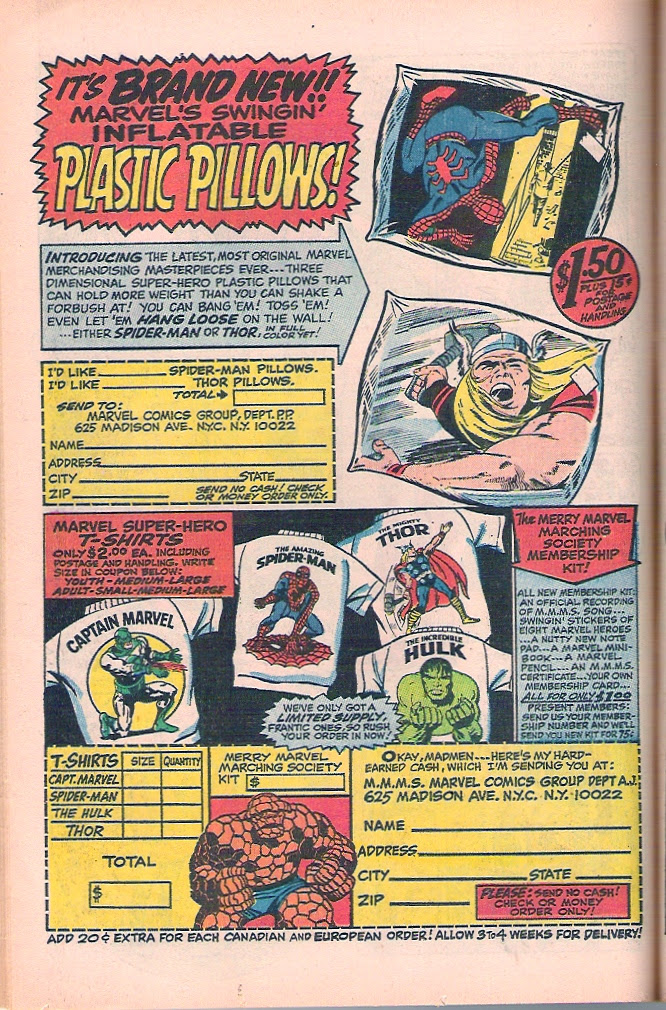 First ad we're looking at today is from the March, 1969 cover-dated Marvel Comics... and man, is that a bunch of cool stuff or what? Okay, maybe not the Captain Marvel shirt with the green-and-white outfit. But the rest is extremely cool! These were all pretty much part of the Merry Marvel Marching Society stuff!

The MMMS was started in 1964, and later absorbed into Marvelmania in 1969. You can read a bunch more about the MMMS here! And check out more comics ads after the jump!

Countdown to Halloween: Movie of the Week - Scars of Dracula! 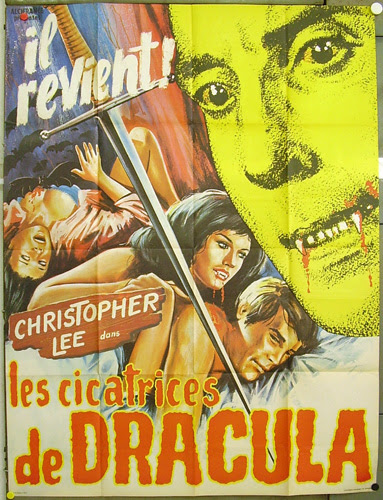 French poster! Trailer and more after the jump! 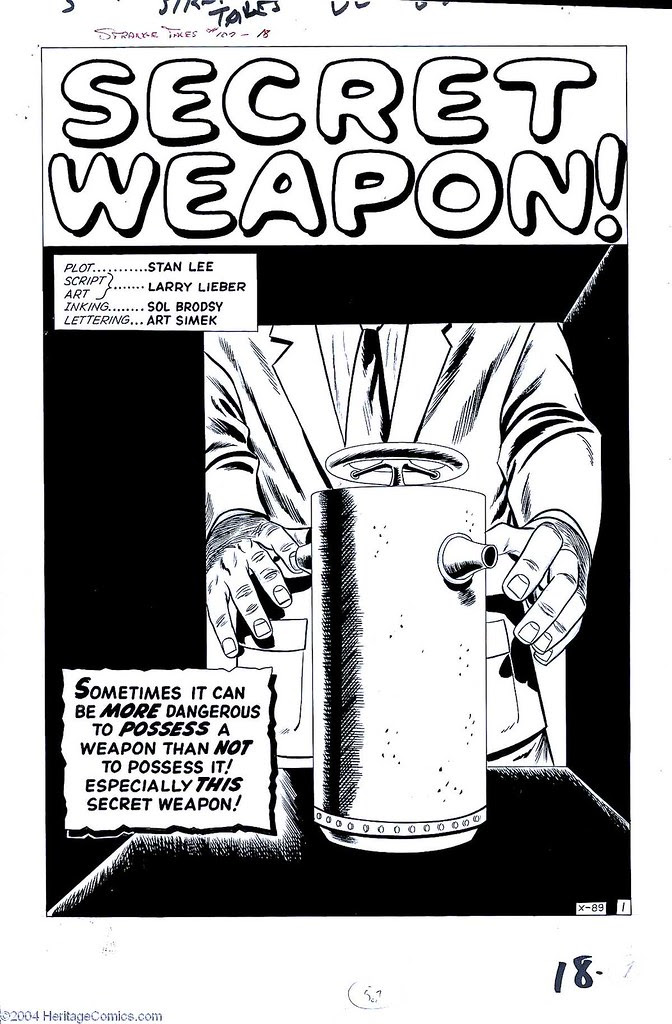 Time for the last of the Halloween-related comic art until next October! So, let's begin with the above piece, page 18 from Strange Tales #107, by Larry Lieber! More after the jump!

Chad Valley's Six Million Dollar Man set had much more meat to the stories than the Kenner version did, as you'll see today (and for the next three weeks following)!

Still have a few more of those TPBs and the like to finish up, but I think we may get into some other cool Marvel stuff today! 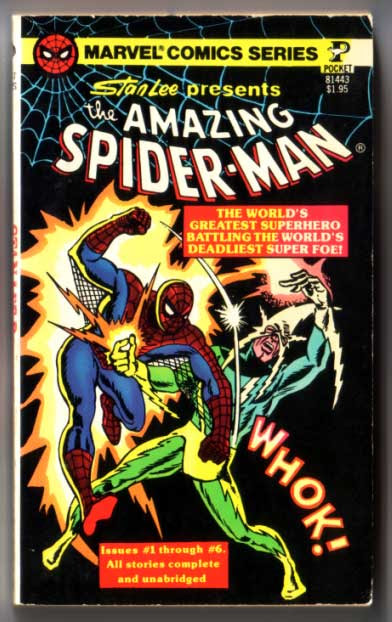 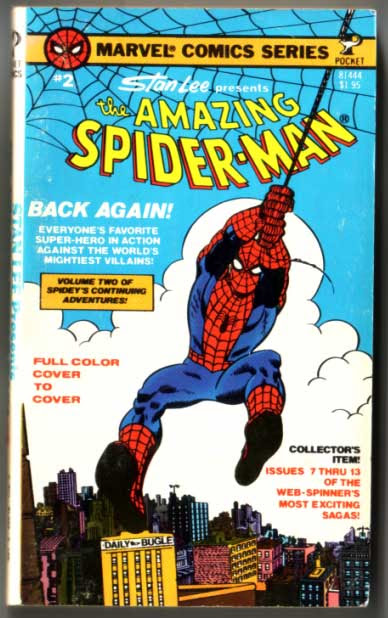 But we'll be starting with some of the Spidey Pocket Books! Check out more when you click
Click for more ->
Posted by Jon K at 12:01 AM 2 comments:

Countdown to Halloween: Random Videos of Geekery - The Creature Walks Among Us 8mm!

Countdown to Halloween: The Monster Times #4! 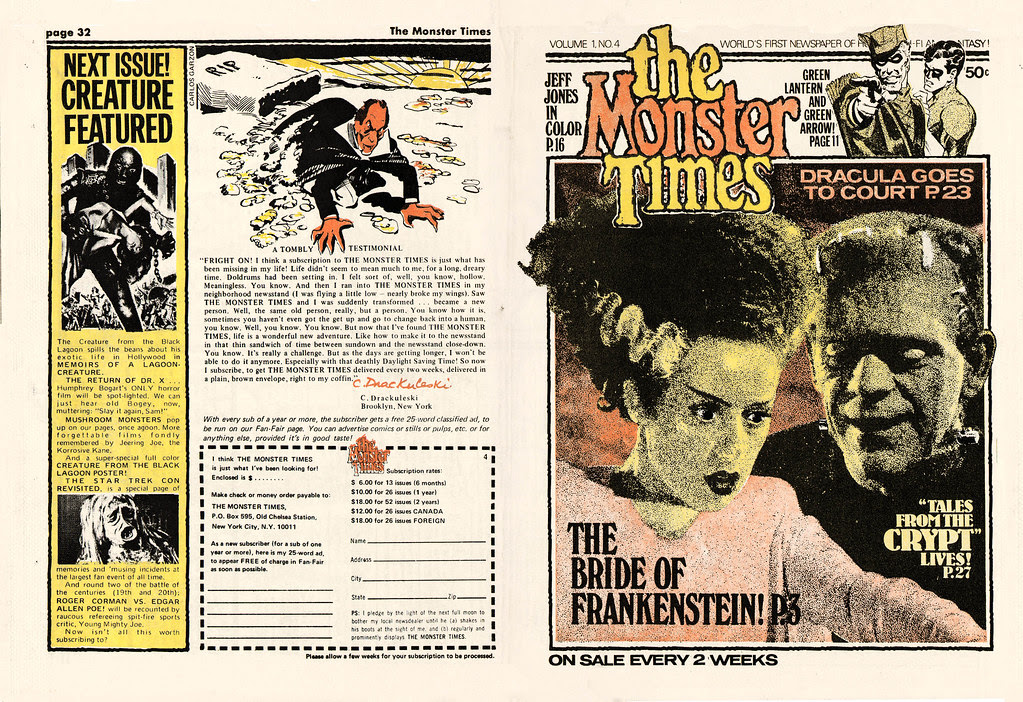 Here's the cover and back cover... for the interiors, click on the jump!

Let's see... birthday party for Superman... Magic Mirror Lake infested by seaweed... Aquaman investigates, gets captured by the seaweedy people who live at the bottom of the lake... fish tells Wonder Woman the A-man is captured... and that about catches you up! 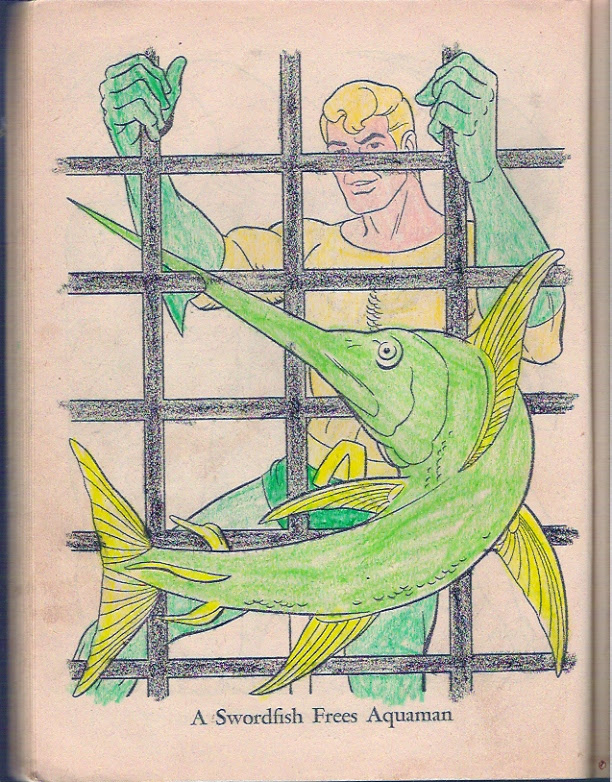 OK, so Aquaman managed to find the one swordfish who lived in a lake (OK, so I'm just assuming it's a freshwater lake, it's a reasonable assumption to make) and got that fish to help him escape...

This and That Time Once Again!

Let's see, I know I've got a few things to share with you guys... after the jump!

So this year, I thought I'd really step things up for the Halloween Countdown, and create a virtual series of monster cards. And then it hit me: Why not start a new blog for these cards, so that anyone who wants to take a shot at coming up with a better gag than I do for the cards can offer it up, and I'll even give them credit for the joke on the card?

Well, it was a good thought... but like the "Certified Geek Blogs" idea from some time ago, it fell flat. There were probably two people who offered some new gags during the summer's run of the front of the cards on their own separate blog. Thanks to the two of them for taking the time to do so!

So, with so little response, I decided to just bag that part of the idea, and instead fill the space on the back of the cards with a monster joke? So without further ado, here's the first half of "Horror-Ble Humor Monster Cards"! At some points in the post, I'll provide links to high-resolution files that you can use to print out your own set of cards (assuming your printer does a better job of matching front-to-back than mine does). 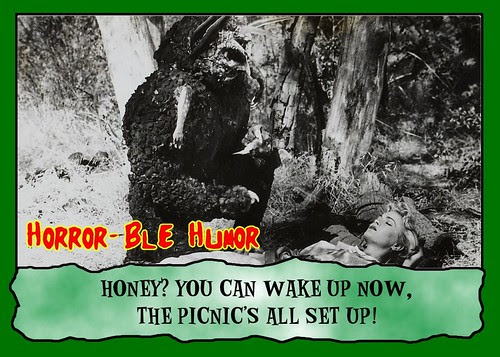 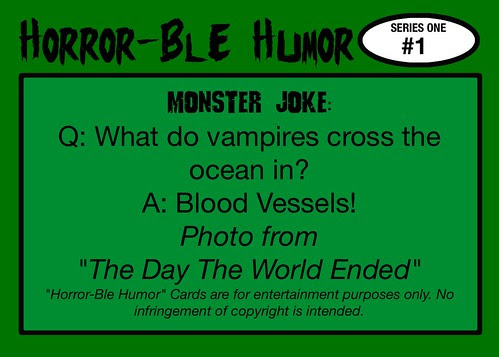 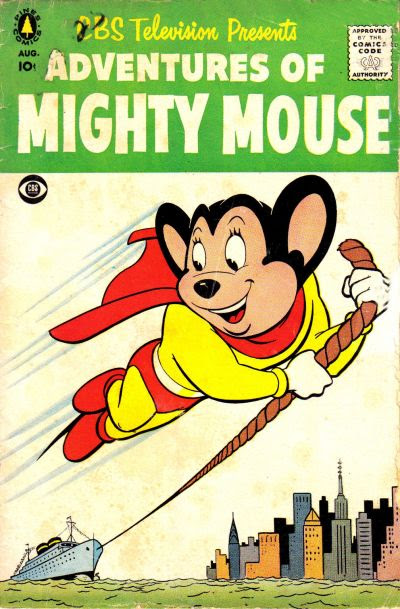 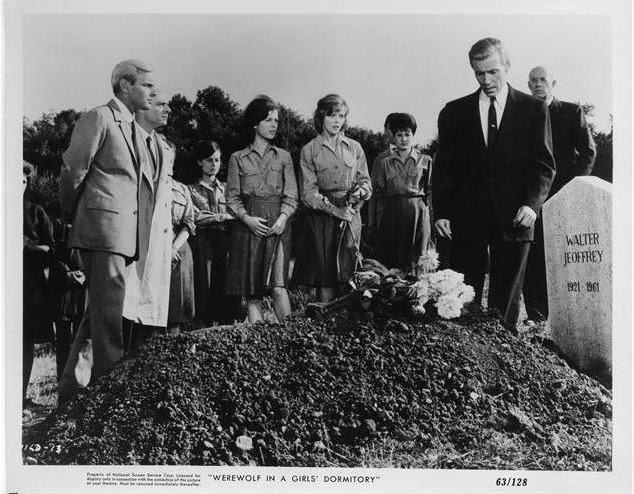 First up are some stills from "Werewolf in a Girls' Dormitory," with more after the jump! 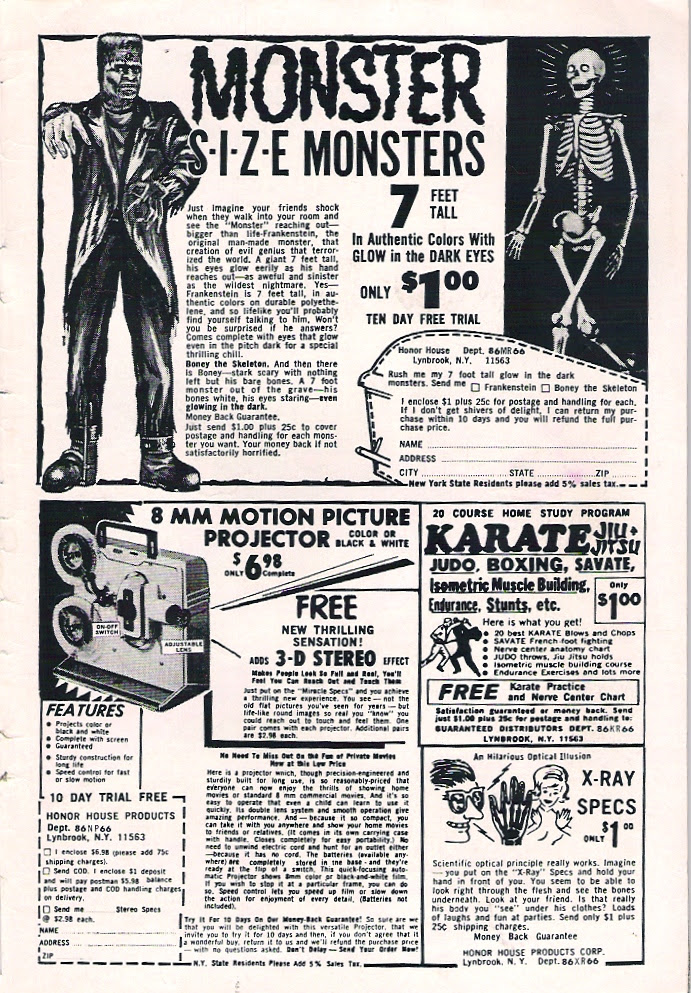 Countdown to Halloween: Dog of the Geek - Fangface 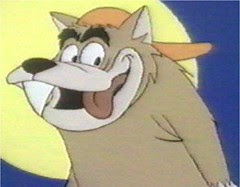 Biography: Sherman “Fangs” Fangsworth suffered from a Fangsworth family curse, which states that every 400 years, a baby werewolf is born into the family. Sherman teamed with three teenagers, Kim, Biff and Puggsy, traveling around in their convertible Wolf-Buggy to catch crooks and solve crimes involving monsters and evil masterminds. Neither Sherman or Fangface are aware of the other. When Fangface sees food or hears a food word, he tries to eat Puggsy; only when Kim or Biff rub his foot will Fangface calm down and release Puggsy. Sherman's transformations can be effected even by looking at a photo of a full moon! Only the sun (or a picture of the sun) will reverse the transformation.

Powers: Fangface has greater than human strength and durability.

Miscellaneous: The second season of Fangface episodes introduced Baby Fangs, Fangface's infant cousin who turns into the werewolf Fangpuss, which seems to contradict the family legend.

Countdown to Halloween: Retro-Review - Adventures Into the Unknown #1, Part 4! 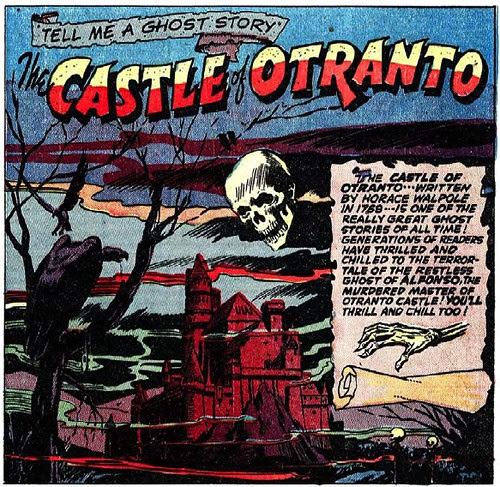 Fourth story in this issue is “The Castle of Otranto,” art by Al Ulmer, coming in at seven pages. This is adapted from the 1768 story of the same name by Horace Wapole.


The story begins with the heir to the castle (it's owned by his uncle Manfred) pacing back and forth, complaining that his uncle wishes him to marry a girl he's never seen, and he'd rather be dead than marry her! Suddenly, a shadow sweeps down upon him, and this humongous helmet (identified as “The Helmet of Allfonso”) crushes him. The staff helpfully tells us that Manfred's ancestor slew Alfonso centuries ago, and that Alfonso is the rightful lord of the castle! Of course, they assume that Alfonso's ghost walks again. They tell Manfred about this, but Manfred does not fear any ghost! Meanwhile, approaching the castle is the lovely red-headed woman whom Manfred's nephew was to marry (wow, he really did speak too soon, didn't he?). Manfred sees her arrive with her servant, Anne, and realizes how beautiful she is! So he decides to woo her himself! 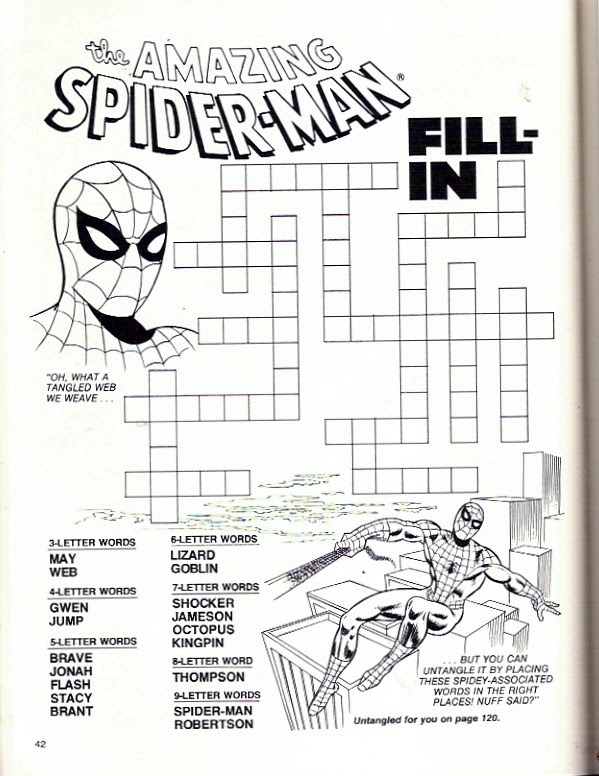