Movie of the Week: The She-Creature!

Trailer and more ephemera after the jump!

Cool Stuff: Pufnstuf and Other Stuff!

The Pufnstuff and Cling (or is it Clang?) puppets above are, sadly, the only Pufnstuf items this time around, but there's more after the jump!

By the 10s: Yosemite Sam and Bugs Bunny!

Well, so far, this one is the very end of the alphabet for me... which it shouldn't be, right? In fact, looking over my master list for By the 10s, did I really manage to miss out on X-Men somehow??? I'll have to check into that. Anyway, the rest of this By the 10s entry after the jump!

For the inaugural installment of "Fandom Library," I've selected this one-shot that tied in with the then-recent movie "The Good Humor Man". Enjoy!

CBT: The Story of Superman, Part 2 - The Adventures of Superbaby!

It's the next chapter in the saga of Superman!

So, with this post, I'm inaugurating the newest feature on Random Acts of Geekery, “The Way of the Geek!” The main purpose of this feature is to find out a bit more about our fellow geeks out there, particularly (at least, in the beginning), fellow geek bloggers!

The geek bloggers who agreed to participate in this answered a bunch of questions I tossed at them, beginning in the spring, so that I could take their answers and, rather than just post questions and answers, I could actually rewrite the interview into a proper journalistic style!

Since this is the first one, I figure that perhaps I should start by answering all these questions myself. Many of the answers I'll provide will likely be old news to you, but there you go! Read on after the jump!

This time around, let's look at a couple of DC house ads! 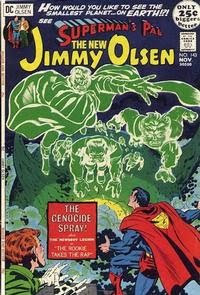 Both of the above ads were from the October, 1971 cover-dated DC comics, and as you can see, they were both promoting two of Jack Kirby's titles, first Mister Miracle #5, and second Superman's Pal, Jimmy Olsen #143. Obviously, the biggest thing that stands out about these is "The Magic of Kirby" tag on both of them... but what I also find interesting is how different the Jimmy Olsen issue was when printed!As you can see, there was a color hold used, as well as the lettering being reversed.  Printing methods of the time probably drove the decision to run the cover in the altered manner.

Also interesting is that both ads mention the on-sale date!  For those of you who are much younger than I am, back in the olden days, there were no such things as comic book shops or Previews... instead, if we wanted to find the latest issue of any comic book, we had to go to a drugstore, grocery store, or some other store that sold comic books.  The dates listed above were the actual dates that the books were supposed to be appearing in the stores, believe it or not!  For that matter, I believe most stores that carried comics got new books on Tuesdays and Thursdays!  If you were a strong devotee, you'd learn what days of the week your local store put out new comics, as well as keep track of the dates in the house ads to ensure you were there when your favorite titles came out!

We'll look at one more ad this time around... this ad also appeared in the October, 1971 cover-dated DC books, as well as many other months, probably in Marvel titles, as well!

There had been ads in the comics before this one ran (as well as after, I'm sure), promising to teach you how to draw comics, and promising big bucks!  I don't know who they thought they were fooling, and I'd imagine any comic artists working at the time who saw this ad probably weren't sure where they got their information about page rates!

My Google-Fu failed me when trying to find out more about this... I know around this time Tony Tallarico had a "How to Draw Comics" book on the market, but I somehow don't think this is related. Anyone know?

Well, it's my birthday month, so I've decided this month's videos of geekery shall feature my favorite musical performers of all time, The Beatles!

To read this mag, do the clicky thing!

Dog of the Geek: Elmo the Wonder Dog!

Breed: Great Dane, although some sources say he's a German Shepherd.
Original Appearances: “Doll Man” comics stories, beginning with Doll Man #31 (1950).
Other Appearances: Unknown
Biography: Elmo was apparently an occasional assistant to the original Doll Man, who would ride him like a horse.
Powers: None
Group Affiliation: Outside of his partnership with Doll Man, none
Miscellaneous: Apparently, when the Doll Man was revived at DC as a member of the Freedom Fighters, there was no further mention of Elmo!

There's going to be a slew of Planet of the Apes items, but first a few other items that start with "P"!

First up is this "Nanny and the Professor" Paper Doll book, something I wouldn't have been interested in when it came out, although I was definitely a fan of the show when it was on! Interesting side-note (at least, to me)... way back in the early 1990s, when the FX channel started, they were rerunning this TV show, and I started watching it for the first time in forever, and realized that the very sexy Juliet Mills (aka Nanny) was probably a very strong factor in my finding women with British accents attractive! Naturally, this was before I was ever exposed to the Avengers with Emma Peel!

More cool stuff after the jump!

What, Halloween was just yesterday, and there's already another monster-related post the day afterwards? Well, that's what happens when Halloween is on a Sunday! So, let's get into the first Monster Monday for November!

And we're starting off with some 20 Million Miles to Earth items, beginning with this insert, with more to come after the jump!

By the 10s: Woody Woodpecker!

Woody's comic is another of those titles that started with Four-Color Comics, then got its own separately numbered series from Dell, and then jumped to Gold Key! And since I can't quite figure out which would've been #10 in the Four-Color line, we begin with...

Issue 20! More after the jump!

The Times, They Are A-Changin'

Beginning this month, there's a slight restructuring going on here at the Random Acts of Geekery... in the past, there've been some features that have been occurring on a specific day of the week, and these are:

Well, none of the above are changing, at least not yet (Movie of the Week will be concluding probably in December when I reach the end of that list, upon which point it will be replaced by Geek TV). But these will be joined on the weekly schedule by the following:

Tuesday: Dog of the Geek! Yes, this feature will be moving to weekly status!
Thursday: The Way of the Geek! This new feature will begin this Thursday, and will appear each Thursday afterwards until I manage to run out of geeks to feature!
Friday: Fandom Library! Another new feature debuting here joins Give-A-Show Fridays!
Sunday: Retro-Review! Another feature that's getting a permanent home on the calendar, joining Puzzle Sunday!

The remaining features (Cool Stuff, Original Comic Art, Comics Ads, Children's Book Theatre, By the 10s -- until I run out of titles for that) will continue to appear on a more or less random basis!

That is all! Carry on!

CBT: The Story of Superman, Part 1 - How Superman Came to Earth

So, interesting story (I think, anyway) about this particular book set. A while back, I was preparing future posts for The Fortress of Solitude Trophy Room (my Superman memorabilia blog), when I came across a photo of the boxed book set you see above. Now, I had completely forgotten I had that photo, so I went straight to eBay and did a quick search, figuring I'd need to save a search on it, and wait and wait.

Didn't have to do that this time! I found a copy of this offered for sale at a pretty reasonable price, put in my bid, and a few days later, was the winner! I've read the books in this boxed set to my kids for story time a few times by now! Now, I know, I've already posted the Fisher-Price Superman book here not too long ago, which covered much the same ground... but that one didn't have artwork by Ramona Fradon, for starters!

After the jump, the first book in this set, How Superman Came to Earth!

And now, the rest of the cards from this collection!