Unlike the other posts of Batman cards, this will be single pictures of the front and backs of the cards, so I'll spread it out over two days. As you'll note, this set was scanned from the reissue edition.

Movie of the Week: Son of Frankenstein!

I don't think I need explain who the headliner of this book was, do I?

Today, we jump back in time to 1962, with the first two of eight slide strips from Kenner's 1962 Super Show Projector set!

This week's offering is a book that was published in Spanish, so most (if not all) of you won't be able to read the text... but enjoy the illustrations!

Here's another ad from the 1974 Gold Key titles, and it's for the Disneykin play characters! These PVC figures looked like a great deal back then, didn't they? But looking at them now, they don't appear to be very good likenesses, do they?

From what I've been able to find out about Disneykins, it looks to me as though this ad was produced simply to clear out the last of the Marx Toys stock, as the series had just ended. If you want to know more about Disneykins, visit the Disneykins website.

Still another ad from the same Gold Key titles... or rather, two ads from them! First, let's look at the ad for the Free color film! This must've looked like a pretty good deal, especially since there was only a charge of a quarter for handling! There had to be a catch of some kind... my best guess is it was used to generate mailing lists.

Next, the ad for 100 free gifts! The bit here is that they send you a bunch of other catalogs along with it, so it was obviously intended to generate a customer base.

Here's the ad from the bottom of that page, for the inevitable Sea-Monkeys! It still amazes me that they were able to get away with these ads for so long... because the Sea-Monkeys looked NOTHING like what was pictured here! And believe it or not, they're still around! Check out the official website here, where they're much more honest than they used to be about what Sea Monkeys are!

The Way of the Geek #6: Tommy Brookshire! 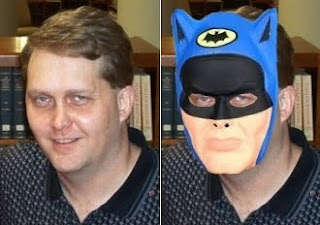 Tommy Brookshire is the creature of the Bat-Blog, probably the most popular Batman blog out there! Tommy was born in Oklahoma City in 1964, and has a sister and two small nephews who are into “Batman: The Brave and the Bold.” He's a print and web graphic designer who also deals in antiques and vintage toys. “I was actually an Antique and Collectibles Dealer for over 20 years but the internet totally ruined it.”

It should be no surprise that Tommy's main geekery focus is writing the Bat-Blog and collecting vintage Batman toys. “I prefer the stuff from the 1960's and 70's, stuff I grew-up with as a little kid. I also collect Vintage Metal Lunch Boxes, Pez Candy Dispensers, Advertising Characters, and Fisher Price Pull Toys.”

Time once again for a parade of original comic book art pages! Today's selections were originally offered for sale on eBay in 2009, but it's entirely possible some may be available for purchase there now.

The first item today is page 7 from Strange Tales #114, by John Buscema! Doesn't look like the best inking match-up to my eyes...

Dog of the Geek: Precious Pupp!

Other Appearances: There was one Precious Pupp Give-A-Show Projector slide strip, and at least one Precious Pupp children's book or coloring book. There was also a record, “Hot Rod Granny,” which featured Precious and Granny Sweet. Precious has, no doubt, made other assorted appearances in Hanna-Barbera merchandise featuring multiple characters.

Biography: Precious Pupp's owner, Granny Sweet, is apparently unaware that her dog is a neighborhood terror. Perhaps this is because Granny has a passion for motorcycles. Precious is very protective of his home and Granny, but sometimes would just cause trouble for the fun of it.

Powers: Precious has the uncanny ability to slip behind a victim quietly, without the being aware of it, in order to scare his victim with a ferocious series of barks that would scare the crap out of the victim.

And we're back to a Big Little Book, and as you can see, this time it's the Spider-Man one, Spidey Vs. Mr. Zodiac! Enjoy!

Going to be a mixed bag this time around, I think...

And first up is this insert poster for Abbott and Costello Go to Mars!

It's Monster Monday time again! First up, here's a Japanese Godzilla Squirt Gun, which I think is pretty sweet!

Not what you might expect, given the title, eh?

As you can see, Crack was another of Quality Comics' anthology titles, headlined by the Black Condor! Above is issue 10!

The first feature is Daredevil in “The Champion of Crime,” by Biro and Wood. The splash page basically goes on and on about chivalry throughout history, with a dedication signed by Biro about how this story was dedicated to “Those gallant warriors of the past and to all the boys and men who will fight fair in the future.”