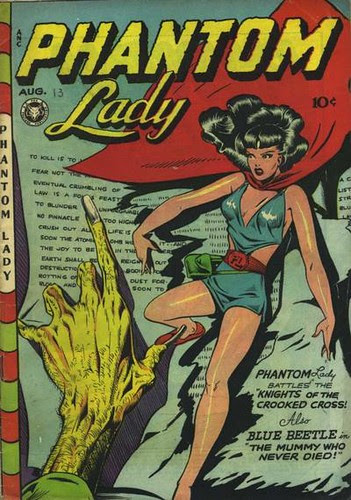 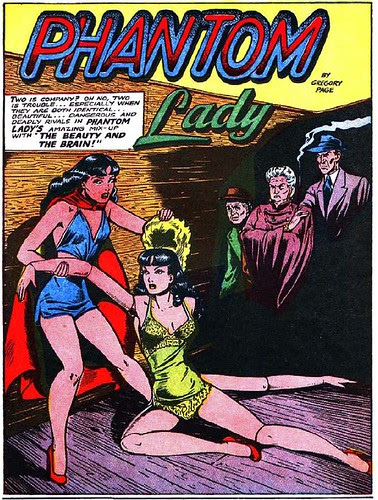 The first story in this issue features Phantom Lady in “The Beauty and the Brain,” written by “Gregory Page,” apparently a pseudonym for Ruth Roche, with art by Matt Baker. By the way, the story opens with a very odd splash page, as the Phantom Lady pulls a blonde wig off a brunette mannequin's head (actually a robot, but it looks like a mannequin), while three criminal types (a short and tall gangster, plus an older woman wearing what appears to be a kimono standing between them, between their heights).

The story proper opens on a train, where Sandra (Phantom Lady) Knight is introduced to the conductor of the train by a Professor Guddel. It's explained that she's temporarily lost her speech! Two cars back, two criminals lurk (the two from the splash page), the shorter one holding a machine gun. They are waiting for Sandra to board the train before they shoot! Suddenly, the Professor starts running towards the train, because he'd forgotten to give Sandra the “allergy report,” which is most important! He's followed by a newspaperman who's been trying to get an interview with Sandra. The gangsters shoot the Professor, and the newspaperman decides to telegraph ahead to stop the killers. Aboard the train, the killers are sitting across from Sandra!

At the next stop, the killers leave the train, taking Sandra with them, meeting a waiting car. Sandra is forced to be the driver, and she drives wildly, almost hitting a newspaper boy! One of the gangsters makes the comment that “She can't make a mistake... she ain't hardly human... Ha-hah! That's a joke, see? Only you don't get it!” Soon, the car arrives at “Dat Dame's” place of business (so far, “Dame” is the only name they refer to that old woman by). As they walk in, one of them comments that Sandra will soon “be talkin' yer beautiful head off... we hope!” 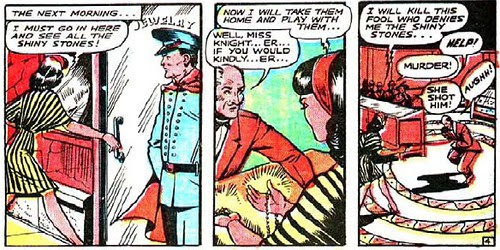 Inside, it's discovered that it's not really Sandra Knight at all, but rather a robot, invented by Professor Guddel! Using the control box, the Dame can control her every move... and the addition of a ring on her finger will let the old Tersa Thron (as she's now identified herself) transmit her voice through the robot's induction box! The next day, she plans to use the robot to get revenge on Senator Knight (Sandra's father) for sending her son to the electric chair some years ago. The next morning, the robot enters a jewelry store and robs it, shooting the clerk!

When the police arrive, they take her into custody, unaware it's a robot, of course! Meanwhile, Sandra wakes up to a knocking on her door. When she opens it, she's hit with a roundhouse left, and is carried off by one of the gangsters, unconscious, while the other picks up a black box a little bigger than a Rubix Cube because he thinks he might be able to hock it. They load her into a car and speed off, planning to substitute the real Sandra for the robot. The police end up getting stuck in an engineered traffic jam in Bolivar Square, unaware that in the back of the paddy wagon, the door's been opened, and the robot is switching clothes with the real Sandra! The gangsters leave the scene with the robot, leaving Sandra in the paddy wagon. 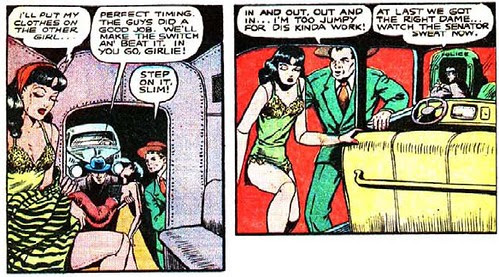 Meanwhile, Senator Knight receives a phone call from Tersa Thorn, who tells him what she's done and how she did it! The Senator goes to the police station to tell them what's happened, but they don't seem to believe him, although they do offer to let him speak to Sandra. Don Borden (the newspaperman, finally identified by name) has meanwhile disguised himself as “Herr Professor Braunch of Vienna,” arriving at the police station to examine Sandra, and he's sent right in! He arrives just as Sandra tries to explain to her father what she knew, but the Senator's convinced it's the robot Sandra! 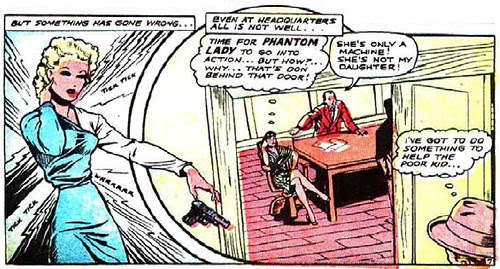 Meanwhile, Tersa Thorn has changed the looks of the Sandra Robot by putting a blonde wig on it and changing her clothes so that the robot might steal some radium! After the theft, she plans on destroying the robot. On automatic control, the robot goes to the Federated Vaults, where she shots a guard, but just before she can commit the crime, something goes wrong with the robot! At headquarters, Sandra's desperately trying to figure out how to change to Phantom Lady while Don tries to figure out how to help her.


Sandra, having spotted Don, tells the police that Don is one of the crooks, disguised with a false beard (these cops couldn't have been very bright not to notice this before, as the beard is completely black while Don's hair is blond). Sandra ducks into the conveniently-empty press room and changes into the Phantom Lady while she hears a radio report that a mechanical woman has just robbed Federated Vaults!

OK, now back up a sec here... you'll recall that the robot changed clothes with Sandra, right? When that occurred, Sandra was only wearing a negligee, yet in the scene where Sandra's changing her identity, she merely shucks off the dress to be revealed in her Phantom Lady disguise, complete with the cape!


Emerging from the pressroom, the cops spot Phantom Lady dashing off, feeling confident that she'll solve the mystery (Don calls after her, telling her she must save Sandra). She sort of off-handedly informs the police that Sandra Knight is innocent on her way out. Outside the police station, she darts into a rather unusual-looking car and takes off! Now, I'm not that familiar with the Golden Age adventures of the Phantom Lady, but this looks to be her official car, sort of a distaff Batmobile (but in lime green). She arrives at Federated Vaults and sees the robot, now standing stock still. She takes off the robot's blonde wig as the cop on the scene notices the similarity between the two (and I won't get into the whole “Phantom Lady doesn't wear a mask but nobody recognizes that she's Sandra Knight” thing here). She disguises herself as the robot, and leaves Federated Vaults, where a car is waiting (but nobody noticed it during all the hubbub?). They tell her to enter the car, having mistaken her for the robot, and drive her to Tersa Thorn's headquarters, where Tersa Thorn informs her that her next assignment is to kill Senator Knight! By the way, that black box that was taken from Sandra's apartment? It's holding her “ray gun,” which Roy Thomas simply called a black light projector when he incorporated her into All-Star Squadron. The Phantom Lady recognizes it in the hands of one of the crooks. Tersa orders her men to take the robot upstairs until they need her.

This is, of course, the perfect opportunity for Sandra to change back into the Phantom Lady, but downstairs, a letter arrives for Tersa Thorn, which contains the allergy report (remember, the one that the Professor tried to give to the robot Sandra Knight at the train station?). It tells Tersa that the robot is “allergic” to radium activity, ruining the delicate mechanism. They realize that it wasn't the robot they brought upstairs after all, and immediately decide it's the Phantom Lady in disguise!


Now of course, it's ridiculous that the Professor would refer to the robot's vulnerability to radium (and, perhaps, any other radioactive substance) as an “allergy,” but let's not nitpick too much, shall we? When the crooks get upstairs, they find the dress and wig, but not the Phantom Lady! They figure she'll be back, and that she doesn't know who she is (presumably referring to the fact that they know she was impersonating the robot, not that she's really Sandra Knight). Soon (although the panel says “at that moment,” even though not enough time has elapsed), Phantom Lady re-emerges into the darkened room, only to stop into a noose trap that pulls her up to the ceiling by one leg! She swings acrobatically and pushes down the one crook (who's still holding her ray gun) while thinking that her father and the police should be there soon!

Gaining her ray gun, she shoots it at the crooks, blinding them with the beam, just as the police do arrive (Phantom Lady had made an anonymous phone call to them)! Before the police enter the room she's in, Phantom Lady manages to loosen the noose. She slips out of the window just as the police barge in, thinking that her secret is safe, and nobody knows who she really is!


Wow, where to begin with this one? It's such a bizarre plot concept to begin with... getting revenge on Senator Knight by having a robot built that exactly resembles his daughter? Seems to me that there were more profitable ways to utilize a near-perfect android (which the robot pretty much was, although one can spot the joints on the elbows and knees). And then there's the whole changing into the Phantom Lady when there's no way she had that costume on under her clothes (unless she somehow had it all under her negligee?). It was awfully convenient for the one crook to take her ray gun and then still have it during the battle, too! Oh, and let's not forget having her special car parked outside of Police Headquarters... to say nothing of the crooks waiting outside Federated Vaults!

But by far, the biggest plot hole in the story was... they knew that robot had impersonated Sandra Knight, one of the cops saw the resemblance to Phantom Lady, and Tersa figured out Phantom Lady had impersonated the robot... and yet not a single person put two and two together to figure out her identity? Ah, such was the Golden Age!

Next time: Another Phantom Lady story!
Posted by Jon K at 12:01 AM