Retro-Review: The Strange World of Your Dreams #1, Part 3!

Next is a two and a-half page story, “Send Us Your Dreams,” by Simon & Kirby. Like the tale leading off the last installment, this is another feature intended to get the readers to submit their dreams to be used in a future issue. In this one, an 18-year-old girl named Julie Pendleton dreamed that she was riding a bike down a busy street wearing a formal gown, when she suddenly stands up on the bike, balancing herself on one foot standing on the seat! But the passers-by, rather than being impressed by this feat, laugh at her instead, calling her stupid and ugly (despite the fact that she's drawn quite attractively). Suddenly, she looks down at herself, and finds her dressed in an old-style bathing suit that does not fit her at all! Next, her best friend pushes her into a puddle, and she starts ballooning (literally) in size!

It's about this point where she wakes from her dream. Richard Temple decides the dream means that someone had recently deflated her ego, and that what she needed was a little humility!

Following this is the one-page “The Mouse That Dreamed He Was a Lion,” another text filler. It's kind of a take-off on “The Secret Life of Walter Mitty.”

Rounding out this issue is “The Dreaming Tower,” art by Mort Meskin. An insert on the splash introduces our lead character as John Sumpter, who's been experiencing an unusual dream for several years! 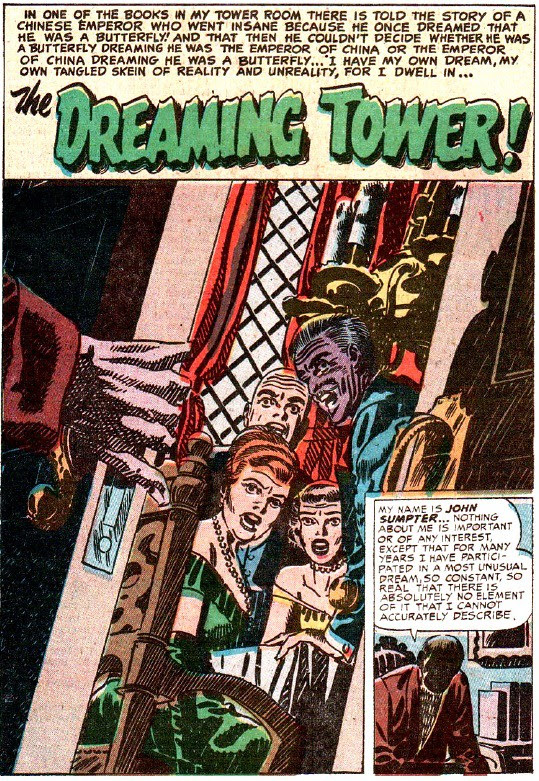 In his dream, he's the sole occupant of a room in a tall tower, where he awakens. Going to the door, a breakfast tray awaits him, but the door is locked. After eating the breakfast, he enjoys reading some books, listening to a record player, and watching the view of the ocean. This had always been the pattern of his dreams... until one day, when he had this same dream, something was different! 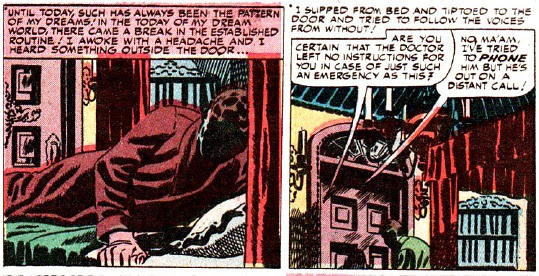 Yes, this time he has a headache in the dream, and that outside the door, there is discussion about a doctor! Listening at the door, he overhears that a pill is overdue, and that Doctor Johnson is to be contacted immediately. Suddenly, Sumpter returns to the bed and goes to sleep again, waking later to find the breakfast tray there... and the coffee was cold. The realization that the routine of the dream had been broken bewilders him, and nothing he does can restore the routine. Again, he hears sounds outside of the door, this time saying that the person the voices were talking about is all right now, and that there should be no trouble tonight, because “my wife and I are having guests!” We readers still have no idea who's on the other side of the door.

Not being able to make any sense out of the events, and knowing that it is a dream, Sumter goes back to bed, waking later to the smell of fresh roast beef. Instead of tasting the food waiting for him, however, he tries the door... which is unlocked now! He leaves the room, walks down a hallway, a flight of stairs, and another hallway, leading him to a dining room. Before entering the room, he hears someone say, “I know something is wrong! I simply don't trust John's new nurse!” Finally, Sumter opens the door and looks at the other people in his dream! 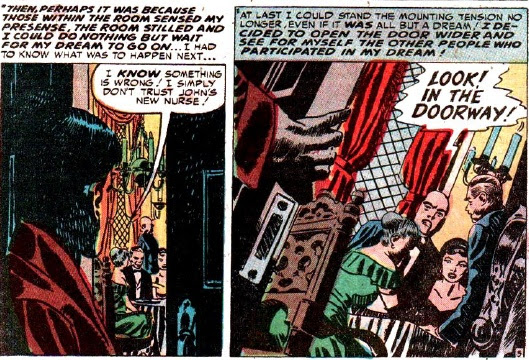 The people react with loathing and fear to Sumter, which causes him to run until he spies his reflection in a hall mirror...

The shock of seeing the monstrous reflection makes him want to scream, to do anything that would wake him up, but to no use! Two of the people from the dining room lead him back to his room, where a doctor tells them it's best that he stay drugged and unaware of his deformities. Sumter realizes that what he'd thought was his real life was the dream, and that this is is reality!

Okay, I can honestly say that I did not see that coming! Reading the story, I expected that when he found other people, Sumter would find them to be horribly ugly, and that he's locked up because he looks normal – at least, to our perspective. Or perhaps that he was locked in some kind of asylum. Either way, I figured something would cause him to have a realization that would help him in his real life... and not that the dreamlike situation would turn out to be a horrifying reality! That's pretty good stuff, if you ask me!