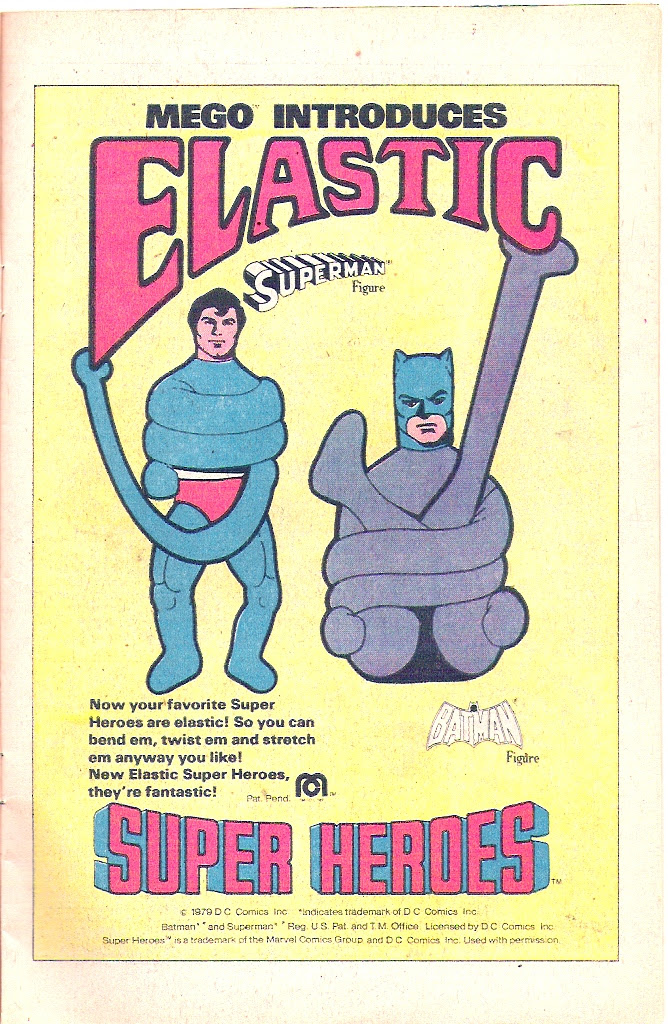 Our first ad this time around is from the January, 1980 cover-dated DC books, and it features Mego's Elastic Superheroes figures of Batman and Superman! I trust I don't need to go into my usual rant about how these were two characters that shouldn't have been made in elastic versions? They also did an equally-inappropriate Hulk and Spider-Man, but apparently also made a much more appropriate Plastic Man! I'm not sure why they never got around to an Elastic Mr. Fantastic. 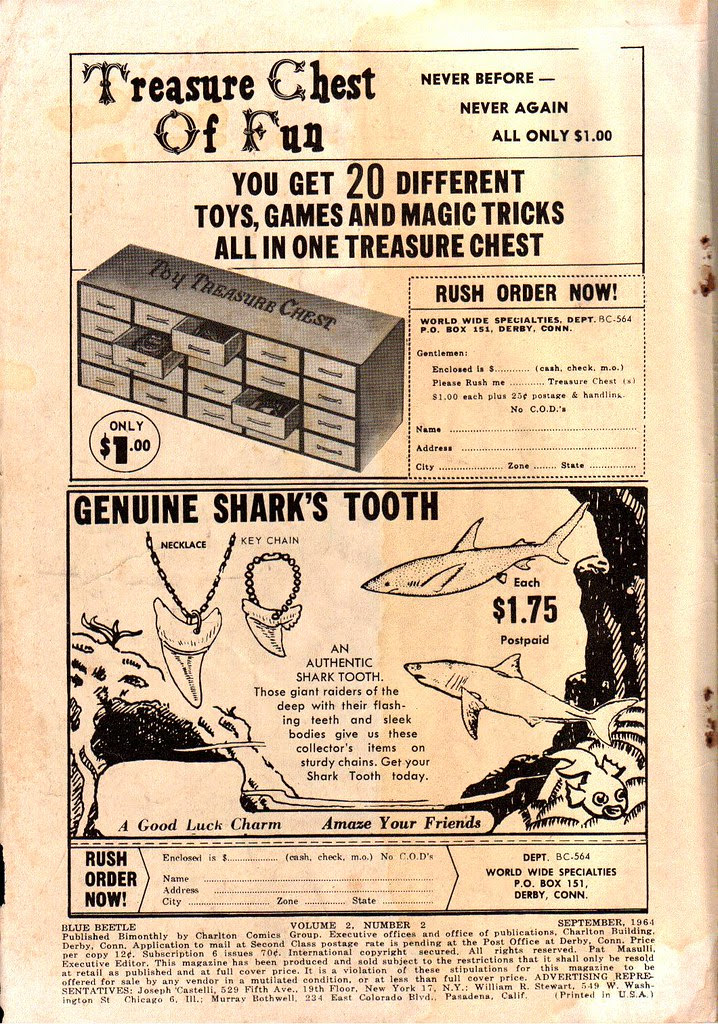 Now we're going to go way back in time for comic book ads for a while! This ad appeared on the inside cover of Charlton's Blue Beetle Vol. 3, Number 2. Let's start at the top, with the Treasure Chest of Fun... 20 toys for a buck sounds like a pretty good deal, doesn't it? I'm guessing that it's all junk, especially since they don't bother showing a decent photo of any of the toys, just the "treasure chest" itself! And on the bottom, there's genuine shark's tooth necklaces and keychains... and this is way before the shark craze sparked by Jaws! I'm not sure why they're promoting them as good luck charms, because they weren't very good luck for the sharks (I know, same joke has been said about lucky rabbit's feet). 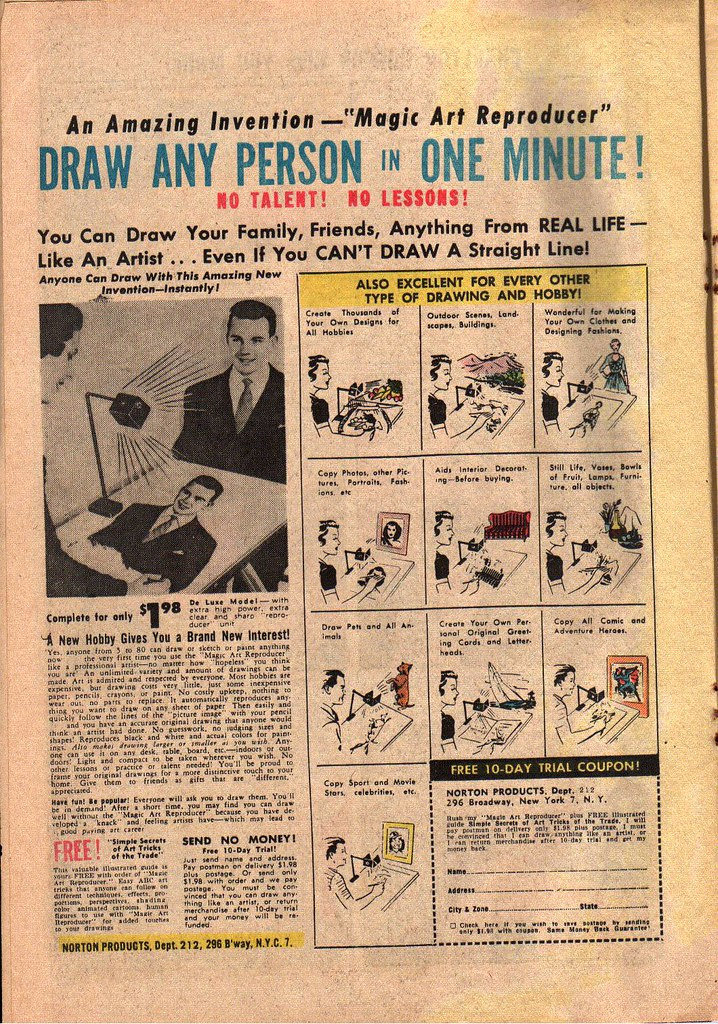 From the same book, here's this projector device that takes all the effort out of drawing, and letting you trace instead! I'm sure that this must've sold well, as I've seen ads for it in comics of nearly all eras from the 50s through the 70s! 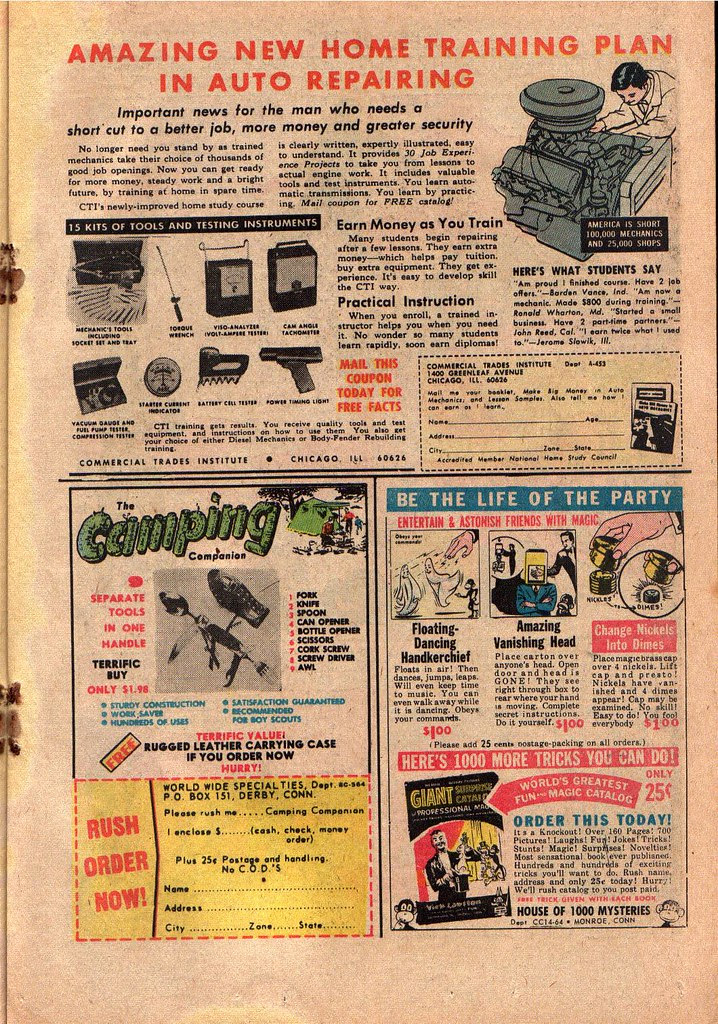 Another from the same book... gee, where to begin? A half-page ad that promises to teach you how to do auto repairs at home? I don't know about how well you can learn from that... but apparently these ads worked for the advertisers! The Camping Companion looks like a standard Swiss Army Knife to me! Personally, I would've been much more interested in the magic stuff, although as you can see, there's only three tricks offered for sale there, and if you want more, you need to order their catalog!

We'll have more ancient comics ads next time around!
Posted by Jon K at 12:01 AM