That evening, Liana meets Wally, a used car salesman, as usual. She tells Wally about what Claire has been doing, and he tells Liana he'd like to meet her and see what makes her tick! Liana tells him that the annual company party is next Saturday, and he'll get his chance – although she figures that she'll have to fight Claire for him. Wally assures her she's the only girl for him. Saturday night, Liana wears her best dress, and thinks about how lucky she is to have a guy like Wally.

At the party, Claire sets her sights on Wally right away, and Liana introduces them. Claire gets Wally to dance with her, and Liana watches them, feeling jealous in spite of herself. She ends up dancing with other men, watching Claire direct Wally out to the balcony. When they come back, she's upset with Wally, but he claims Claire just wants to buy a car, and she wanted to see Wally's car. 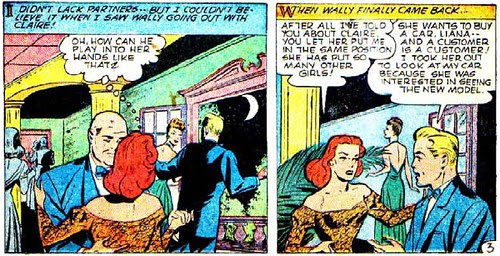 Liana points out that Claire can't afford a car, because she spends all her money on clothes. She has Wally take her home, and the two of them argue, breaking up. Liana figures Wally will call her to make up, but instead, the next work day, Wally calls Claire at work instead, asking her out to take a ride in a new car! Liana considers quitting the office, but then is called into Mr. Robertson's office. She's told that Jim Manning, one of their top men, is being brought from the West Coast to be the Eastern Division Manager, and he's offering Liana the job as Manning's secretary. Liana accepts, figuring it's a wonderful break. A few days later, he's introduced to her new boss.

Of course, things don't stay great for Liana there too long, as soon, Claire shows up in Manning's office. However, Manning sends her away because they're very busy. Liana figures Claire won't give up that easily. Things actually look up for Liana as that night, when she leaves the office, Wally is there, wanting to take Liana back! Liana shoots him down, however, knowing Wally's only coming back to her because Claire's moved on to bigger game. The days pass, and Liana notices that Jim is showing more and more interest in her, until one day, Jim asks her out to dinner, but she declines (not telling him she's afraid to get serious with him). 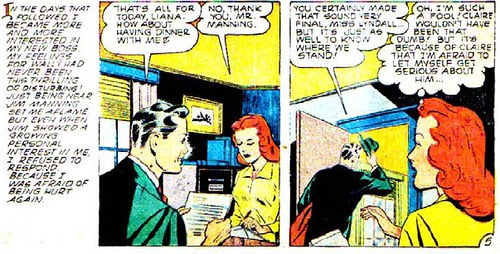 The next morning, after a sleepless night, Liana goes to work to apologize to Jim, but he doesn't seem to mind. He praises her secretarial skills, and then tells her he's fallen in love with her. He also says that last night, after she turned down his dinner invite, he found a purse in the seat of his car, and after looking in it, he knew the owner of the purse was the kind of girl he could love, and he intended to meet her! Liana recognizes it as Claire's purse, specially prepared to get Jim's interest, and it's Claire's latest ploy to get Jim. Suddenly, Liana decides that Claire's not going to get away with it this time!

Yes, Liana claims it's hers, and he seems to accept this! But then, Claire interrupts them, saying she heard Jim found a purse that she lost. Jim tells her she should be more careful about deliberately tossing purses into a man's car, because she might get him in bad with his fiancee. Claire acts all insulted, and Liana is ashamed, but then Jim reveals that he was wise to Claire from the start, saw her plant the purse in his car, and figured he'd use it to see if he could get Liana to be jealous. Since she took the bait, he figured that meant he loved her! 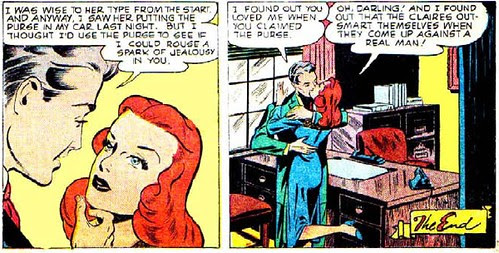 OK, I am well aware that in bygone days, there were women who became secretaries in order to meet and fall in love with a successful businessman, odd as that may seem to us these days... but man, that office was ridiculous with inter-office relationships, wasn't it? Remember, Claire's reputation among the other secretaries was that she'd steal guys away from the other women... that implies a lot of inter-office romance was going on there. Certainly this kind of story doesn't provide much of a good role model for the female readers (not that any romance comic of the era provided any better ones). And of course, once again, there's the rapid relationship happening, with a rapid engagement!

Anyway... next up in this issue was a two-page text feature, “Glamorizing Yourself,” with all kinds of suggestions for doing one's hair and makeup. Nothing I'd imagine any of you reading this would be interested in!