Dog of the Geek: The Houndcats! 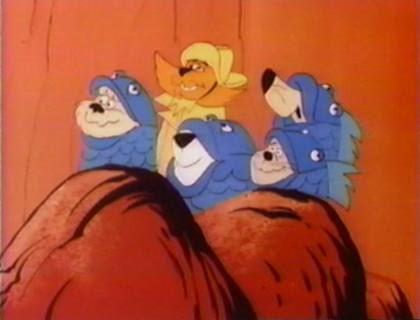 Other Appearances: One Give-A-Show Projector slide, and that's probably about it.

Biography: The Houndcats were a group of agents (loosely based on Mission: Impossible) comprised of three dogs (Dingdong, Musselmutt, and Rhubarb) and two cats (Stutz and Putty Puss). Stutz was the leader of the group. Ding Dong wore a blue Civil War uniform, and was the right-hand man with bad timing and judgement on almost everything. Mussel Mutt was the muscle of the group, while Rhubarb was a scientist who could invent just about everything.

Powers: Mussel Mutt was incredibly strong, while Rhubarb was super-intelligent.

Miscellaneous: Only thirteen episodes of this show were made. Rhubarb's breed is possibly intended to be chihuahua because he wore a large sombrero on the show that hid all but just his nose. Joe Besser (the last of the replacements for Curly on The Three Stooges) did the voice for Putty Puss. Daws Butler did the voice of Rhubarb for three episodes, with the rest being done by Arte Johnson.
Posted by Jon K at 12:01 AM