Concept: The King of the Seven Seas protects the oceans of the earth, especially the undersea kingdom of Atlantis, aided by his youthful companion, Aqualad, their seahorses Imp and Storm, and the walrus Tusky, with occasional help from wife Mera.

Total Episodes: 36 segments, paired up into 18 episodes (with 18 other cartoons featuring the Justice League, The Atom, Flash, Green Lantern, Hawkman, and the Teen Titans, three episodes each)
Original Air Dates: 1967 (as part of the Superman/Aquaman Hour of Adventure, then as a solo series in 1968.
Original Network: CBS
Geek Factor: 10
Characters: 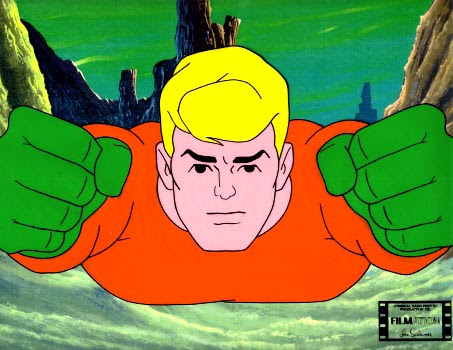 Aquaman (Marvin Miller): Defender of Atlantis, King of the Seven Seas, with the ability to telepathically command sea creatures and also throw “hard-water” balls (a power given him in the cartoon).
Aqualad (Jerry Dexter): Youthful companion of Aquaman, Aqualad lacks the telepathic control of sealife power.
Mera (Diane Maddox): Wife of Aquaman.
Black Manta (Ted Knight): Arch-foe of Aquaman.
Geek Guest-Stars: None that I could identify. 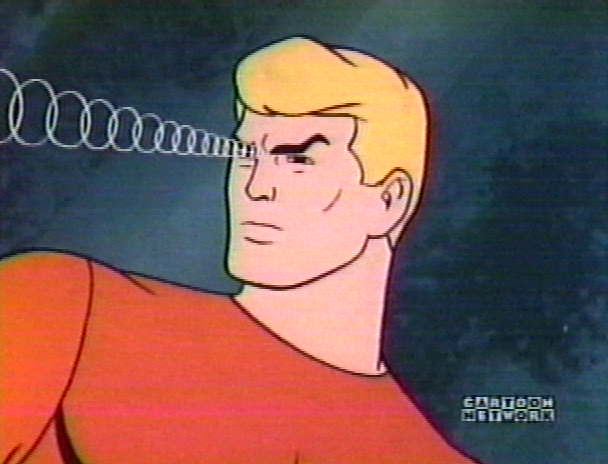 Geek Pedigree: Filmation, of course, did a whole mess of DC character shows! Many episodes of this series were written by George Kashdan and Bob Haney, who had written (and would continue) to write comics for DC. Marvin Miller was the voice of Robby the Robot in “Forbidden Planet” and was the narrator of Police Squad, appeared in an episode of The New Adventures of Wonder Woman, was the narrator of Electra Woman and Dyna Girl, voiced Zarn on Land of the Lost, appeared in an episode of Kolchak: The Night Stalker and Mission: Impossible, did voice dubbing on Gammera the Invincible, Godzilla Raids Again and Invasion of the Astro-Monster, and did many other animated series voices, including parts on Journey to the Center of the Earth and Jonny Quest. Ted Knight appeared in a number of other Filmation programs, including parts in The Ghost Busters, Star Trek, and Lassie's Rescue Rangers (pretty much all Filmation programs used him until the early 1970s or so), was the first season narrator of Super Friends, voiced characters in The New Scooby-Doo Movies, and also appeared in The Invaders, The Wild Wild West, Get Smart! and The Outer Limits. Jerry Dexter would do other voice roles, including Superboy in an episode of Super Friends, Sunfire in Spider-Man and His Amazing Friends, Ted in Goober and the Ghost Chasers, Alan in Josie and the Pussycats/Josie and the Pussycats in Outer Space, Gary Gulliver in The Adventures of Gulliver, and Chuck in Shazzan, as well as a variety of one-off roles in a number of other Filmation and Hanna-Barbera shows. 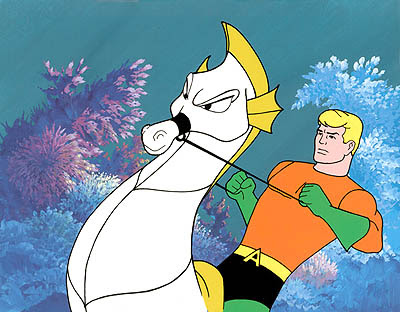 DVD Release: Complete box set
Website: http://www.aquamanshrine.com/search/label/filmation will show you all of the Aquaman Shrine's posts about the series, while http://www.tempestspurplereign.com/aqcarsyn.html has a complete episode guide.
Notes: Oddly, though I know my siblings and I watched the various permutations of the Superman animated series on CBS Saturday mornings, I don't recall watching Aquaman then, instead remembering watching him on his own show Sunday mornings. Childhood memories can be odd, though... because I could have sworn that the special guest spots with GL and the rest had a lot more than three episodes each!
Posted by Jon K at 12:01 AM