And now, the first presentation of Kirby Kovers here on The Random Acts of Geekery! As most of you are probably aware, Jack Kirby is my #1 top favorite comic book artist of all time, so this feature should come as no surprise to you. I spent quite a bit of time going through the Grand Comics Database, tracking down every cover they had credited to Kirby, saving them, uploading them to Flickr, and then randomizing them so we can get a nice variety each installment! The covers begin after the jump! First up is Black Magic #33, and I've got to say, I absolutely LOVE the fact that Jack designed three different undersea exploration outfits for the dudes on this cover! I'd imagine most artists would've been happy to create one design and stick with it, but not our Jack! There's also a nice sense of malevolence with the giant fish that can think like a man -- note that one eye appears to be partly closed, a visual device that Jack would use more extensively starting in the 1970s to create a sense of cold-blooded insanity. 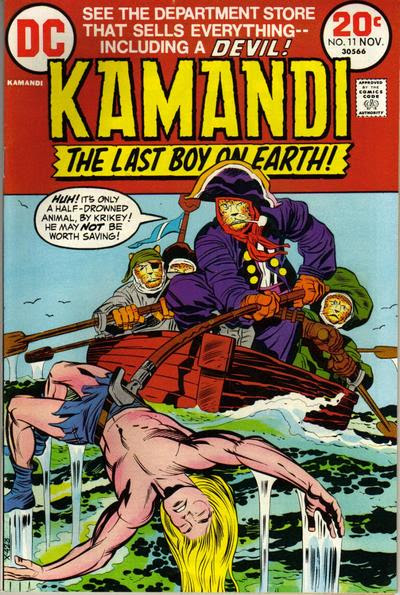 Speaking of insanity (the good, creative kind, that is), here's the cover of Kamandi, The Last Boy on Earth #11! Even though DC had gone to that cover style that covered up the top third of the cover, Jack could not be contained! And let's face it, nobody could do serious animals evolved into manlike creatures like Jack could! And imagine, Kamandi himself is positioned on the cover in such a way that you wouldn't have actually seen him in a standard spinner rack -- then again, those pirate tigers probably were more attention-grabbing! I think it's some of the incidental details on this cover that really make it special to me, such as the pipe in the mouth of the captain, and the eyepatch on the mate. Also note the bowing of the handle of the hook being used to drag Kamandi out of the water. 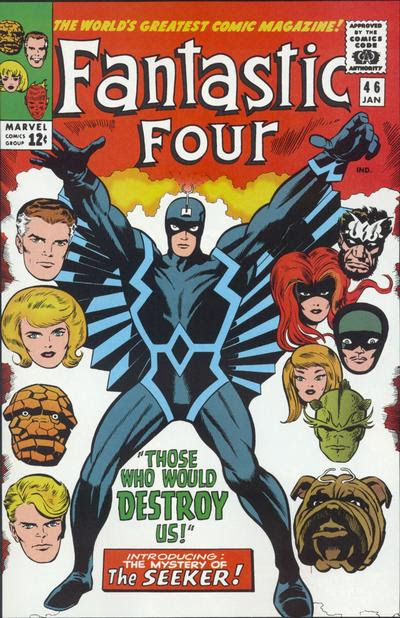 Next, the cover to Fantastic Four #46... definitely an eye-catcher, isn't it? I don't know if Jack was the creator of the "floating heads" cover style, but he certainly mastered it, eh? The FF on one side (all immediately recognizable, you can't mistake Johnny Storm for Steve Rogers), the Inhumans on the other, with Black Bolt in the center, posing dramatically! I think it's interesting to note here, the shadows on Black Bolt's wings make it apppear that the wings only attach up to about the elbow! Maybe he hadn't quite decided how they were to appear by this point? I have to say, too, that Black Bolt's wings are very difficult for many artists to portray well... even Jack seemed to have trouble here, given that they're twisting differently (perhaps it's intentional, given that Black Bolt's left arm is slightly higher than the right). It's also possible that this was an inker error in interpreting the pencils, or maybe Jack hadn't decided where they hinged at yet. 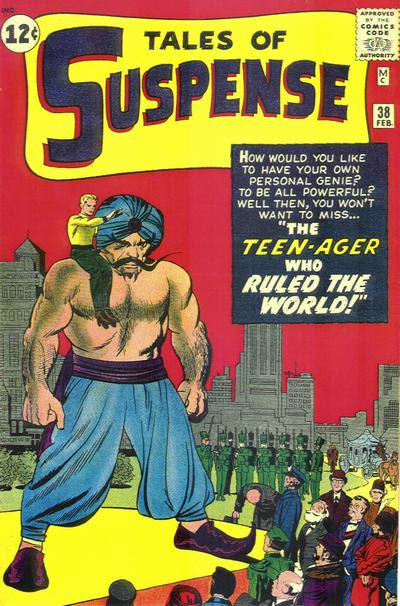 Last -- but not necessarily least -- is the cover of Tales of Suspense #38, and it's really a very quite, sedate cover for Jack... it would almost be boring if it weren't for the sheer power in the figure of the Genie there. Even the teenager sitting on the Genie's shoulder appears uncharacteristically static, almost as if he was drawn in (or maybe pasted in as a stat?) afterwards. I must say, the red sky background really makes things pop, too!
Posted by Jon K at 12:01 AM