Still dealing with mixed bag stuff... I've got to double-check my sorting when I start a new volume of photos! 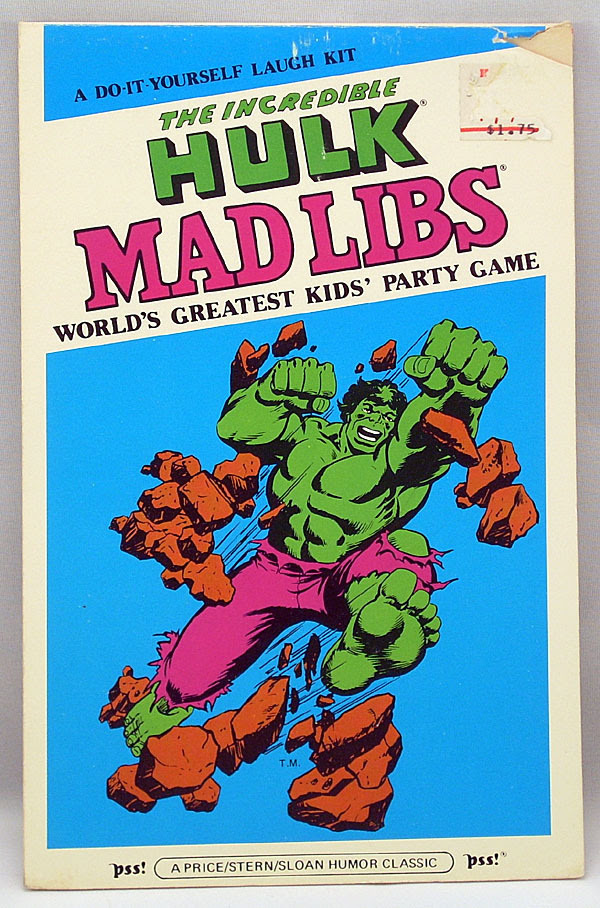 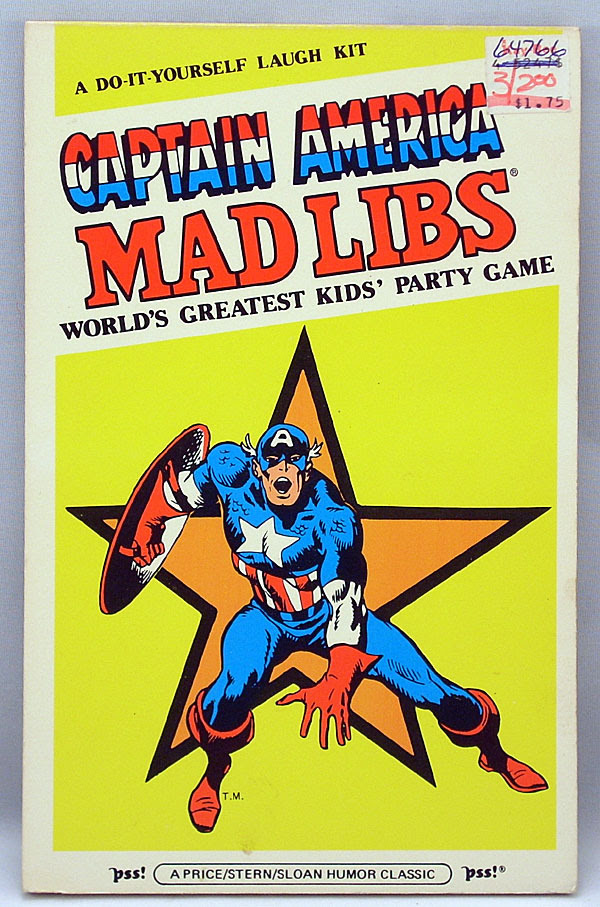 And first up this time are these Hulk and Captain America Mad-Libs books! I must say, doesn't it look like the art from these were traced from existing art? Why couldn't they have just used the original? 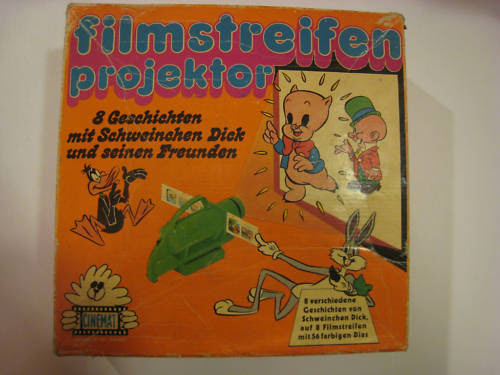 Here's an unusual item... it's a German Bugs Bunny Give-A-Show Projector! To translate some of the text, it says "Film Strip Projector, 8 stories with Sweinchen thick and its friends" -- I cna only guess that "Sweinchen Thick" is Porky Pig! 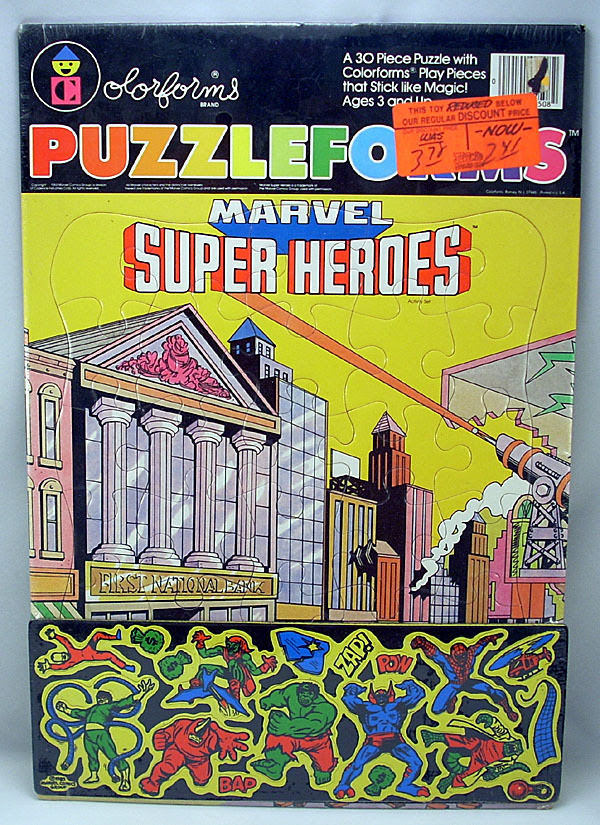 Next, a rather bizarre variation on the usual Colorforms... it's Puzzleforms! As you can see, the background is in the form of a frame-tray puzzle, so you can have the fun of putting it together before making a battle scene with the Hulk and Spider-Man battling it out with the Leader, Doc Ock, the Rhino, Green Goblin, Abomination, and the Lizard! I have no idea why they figured they had to color the Abomination blue, though I can understand picking red for the Rhino (after all, grey was probably out of the question). 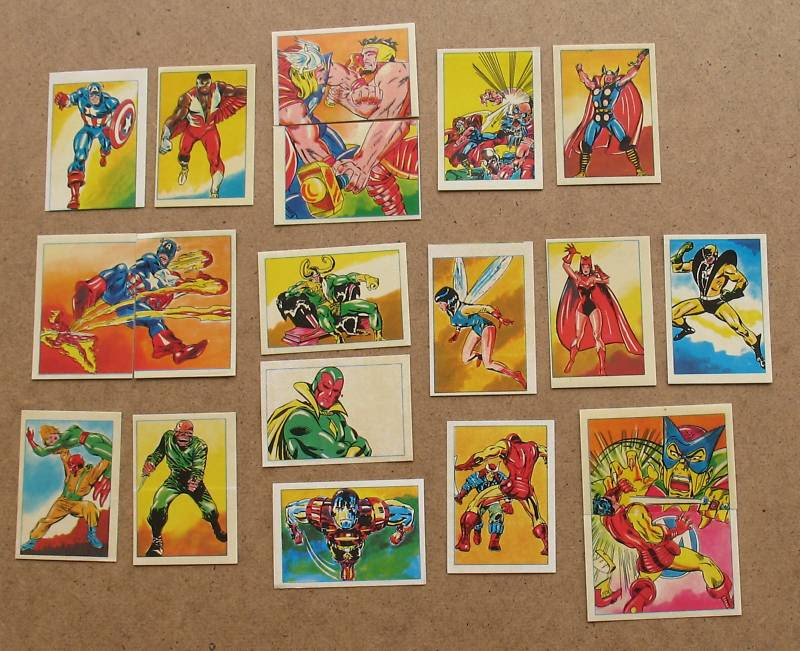 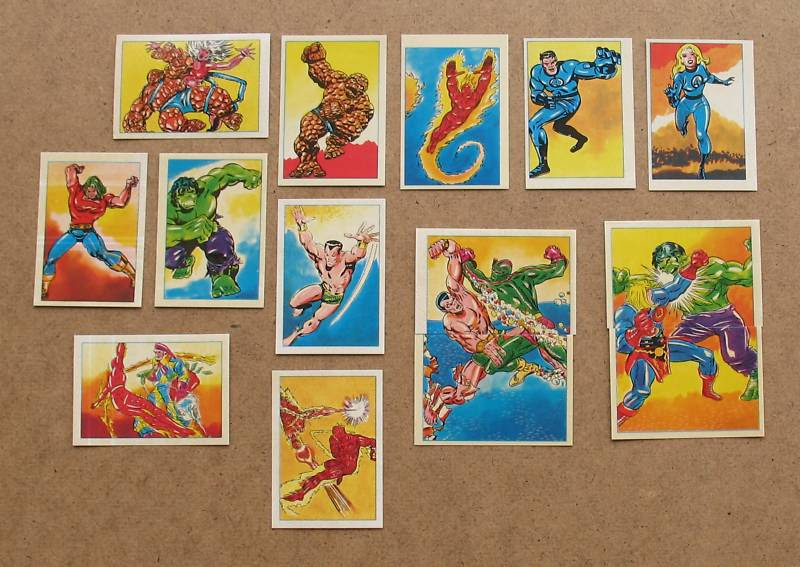 Next, some Marvel stickers - many based on classic Silver Age and Bronze Age art - that came out in 1980! 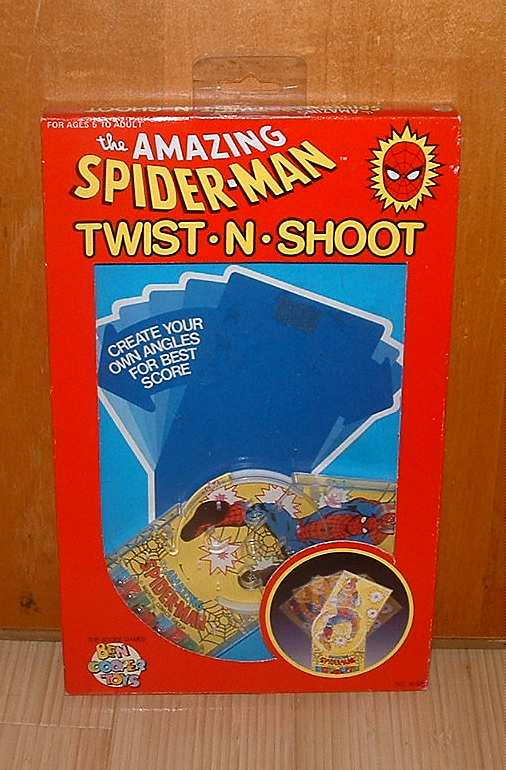 This Spidey Twist-n-Shoot game appears to be a variation on target and pinball games! 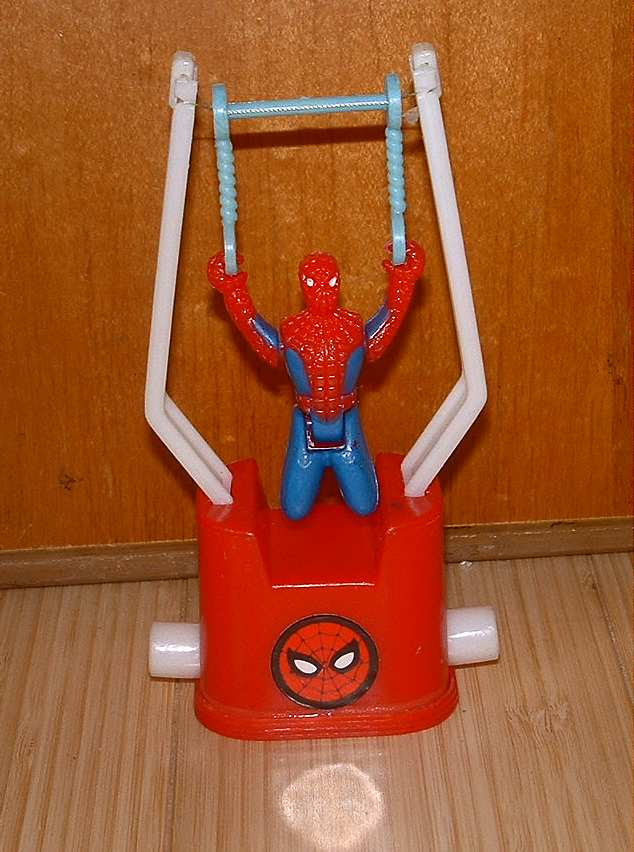 Spidey Tricky Trapeze! Something so obvious you wonder why it wasn't made sooner than it was (not that I know the year this came out). I suppose it must've been a 70s item, given that they also made a Hulk one (that makes less sense), seen below: 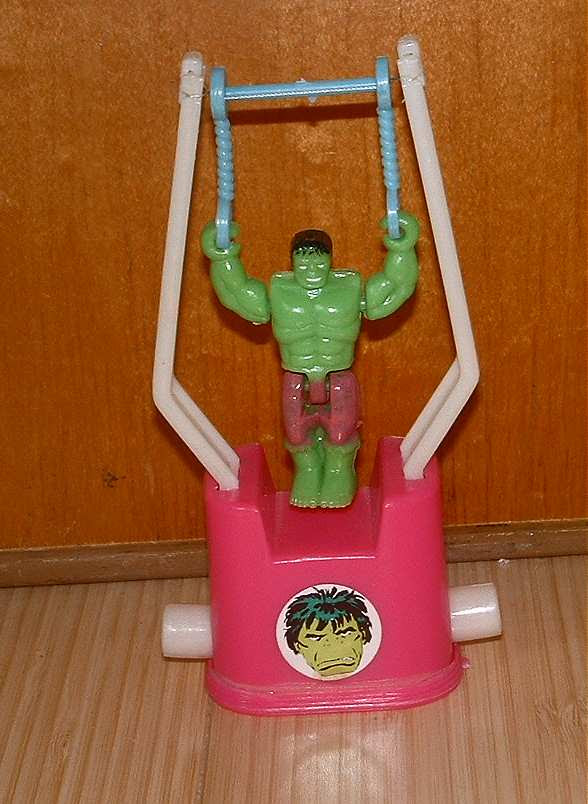 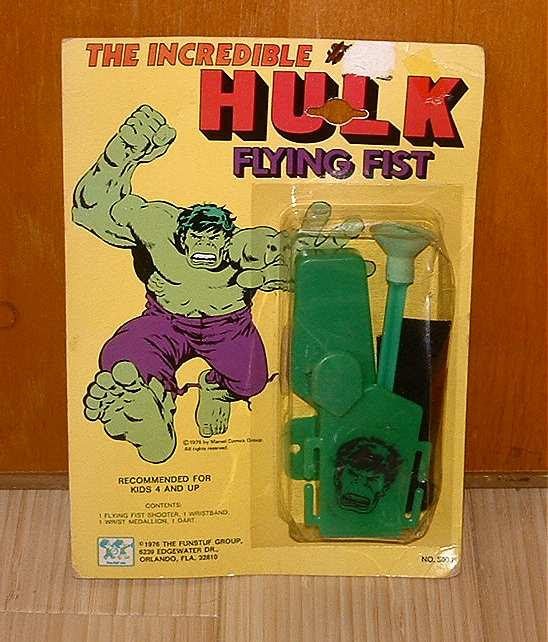 The Incredible Hulk Flying Fist! Yes, as you might have guessed, it's the Spider-Man Web Shooter done with different colors and graphics! They also did a Cap flying shield version. 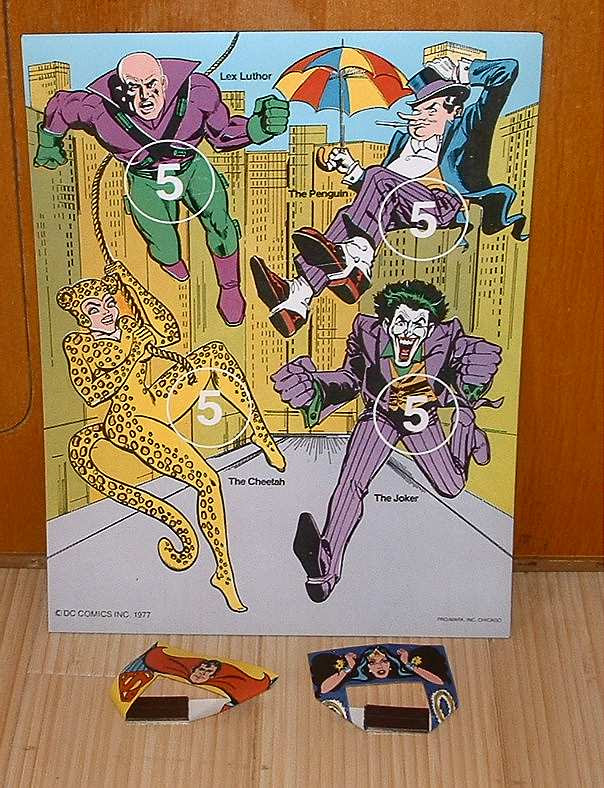 This Batman, Superman and Wonder Woman magnetic target game has a bizarre mix of art, doesn't it? That's a Bronze Age Lex (late Bronze Age Lex Luthor, if I'm not mistaken), Silver Age Penguin, Golden Age Cheetah, and I'm not sure what era that Joker picture came from, with its bizarre proportions! 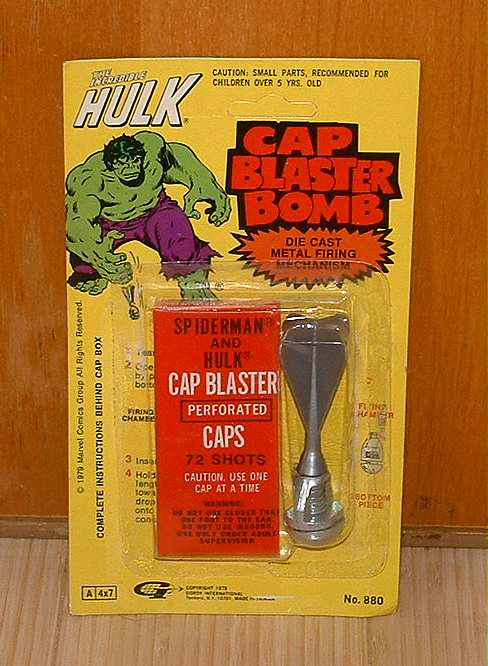 Yes, your eyes don't deceive you... it's a Hulk Cap Blaster, and the caps obviously indicate there was a Spider-Man version, too! Doesn't look like either character is represented on the blaster itself, making it yet another licensed item that, out of the package, doesn't indicate the licensing! 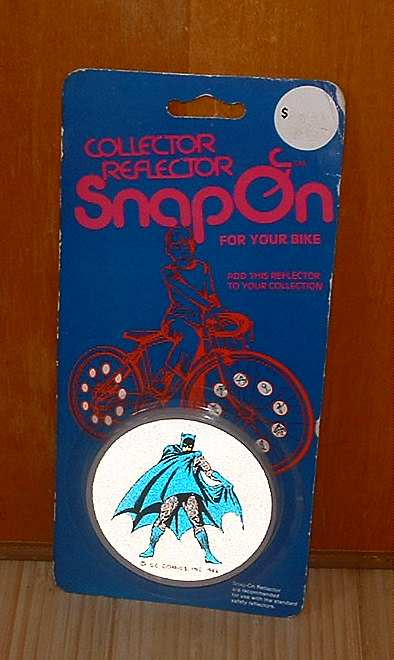 That's a nice-looking Batman bike reflector from 1966, isn't it? 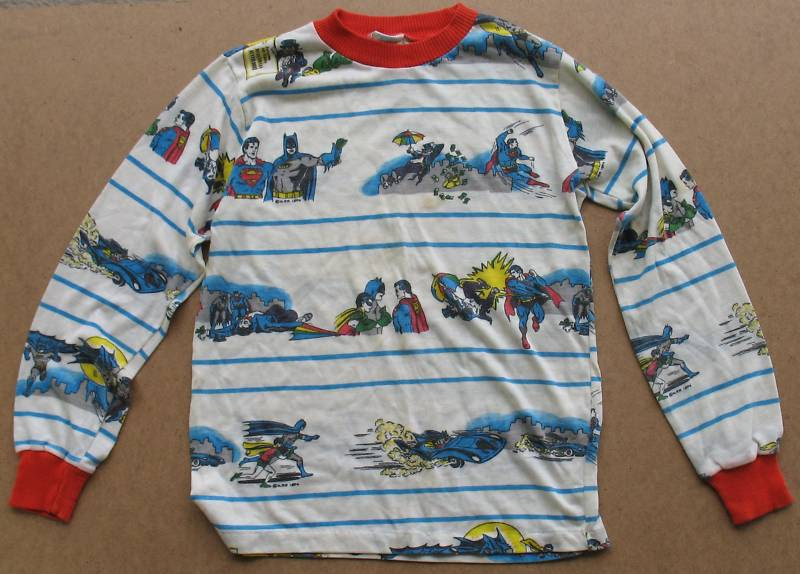 Looks to me as though this shirt featuring Superman, Batman and Robin was probably a pajama top... I would've loved this as a kid! 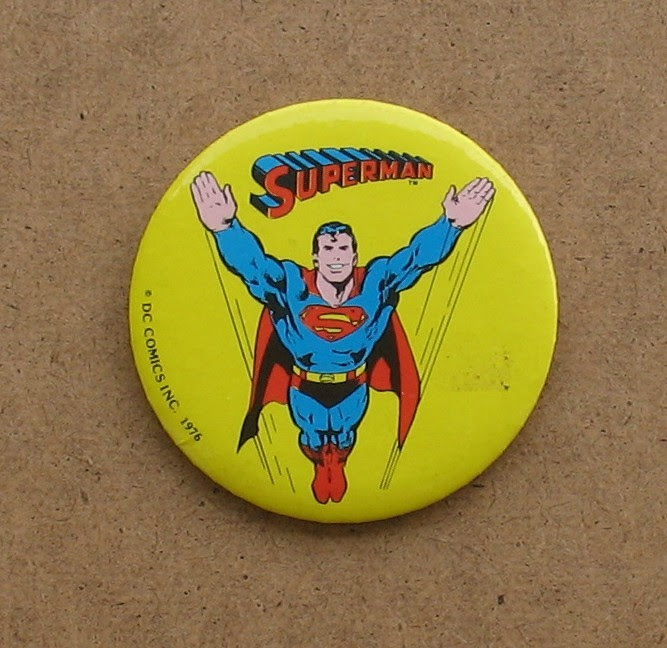 A nicely-designed (but poorly produced) Superman pin, featuring what appears to be Neal Adams art (too bad a lot of detail's dropped out). 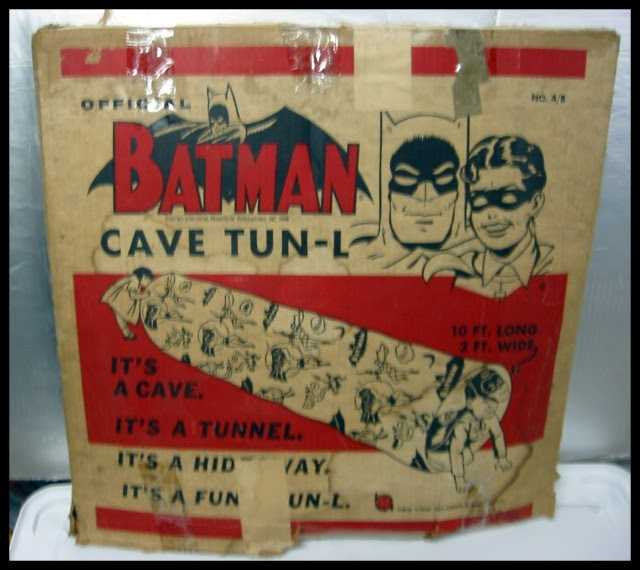 When I first saw this Batman Cave Tun-L offered on eBay, I thought, "Wow, what a ridiculous item!" 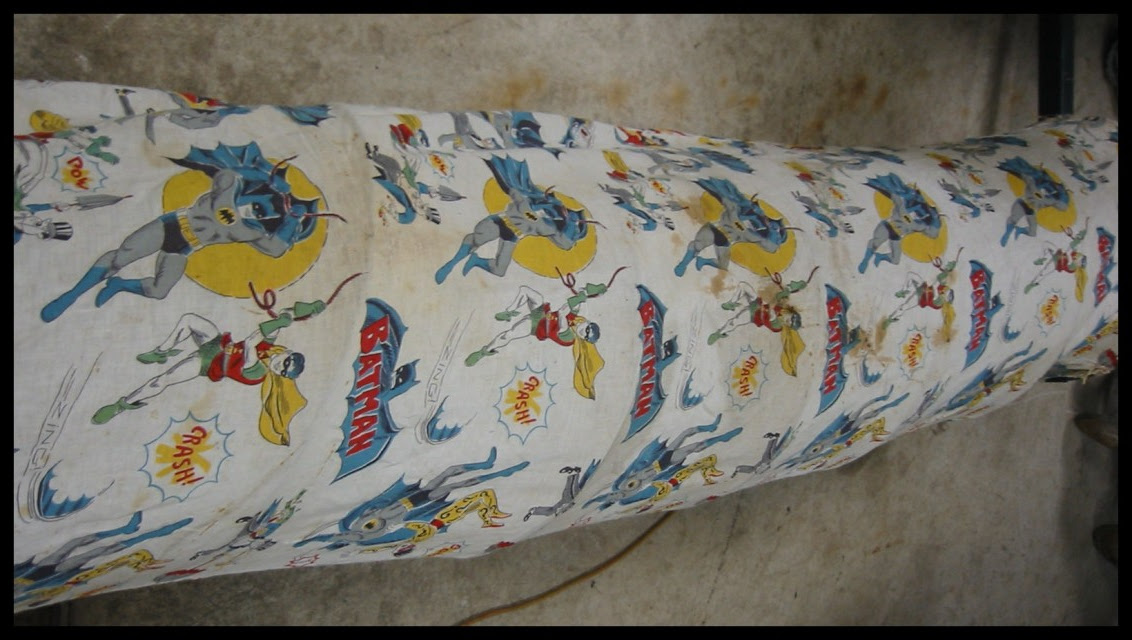 Yes, even after seeing the tunnel itself, I still thought that! But having thought about it some more, I can see how it might appeal to kids... Would've probably appealed more if it had some kind of rock pattern on the outside, with a "secret Batcave entrance" at one end! 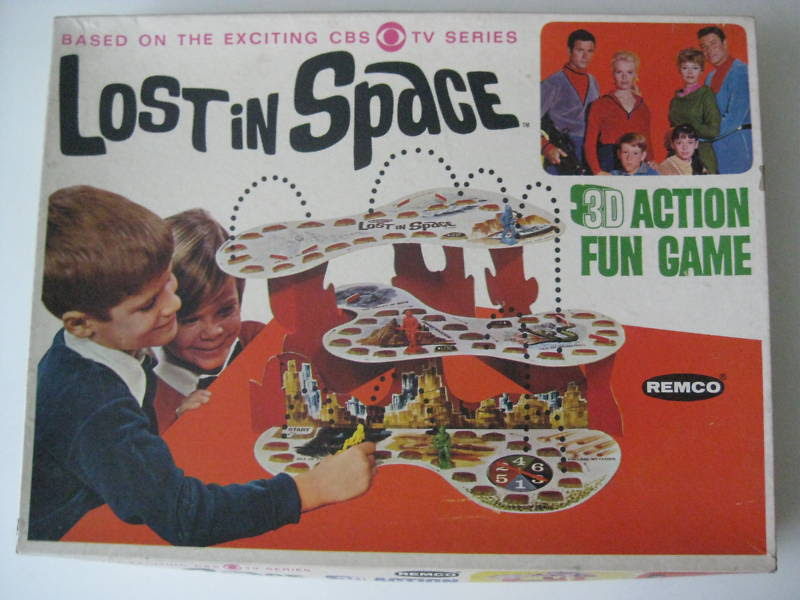 Next up, a Lost in Space game produced by Remco! 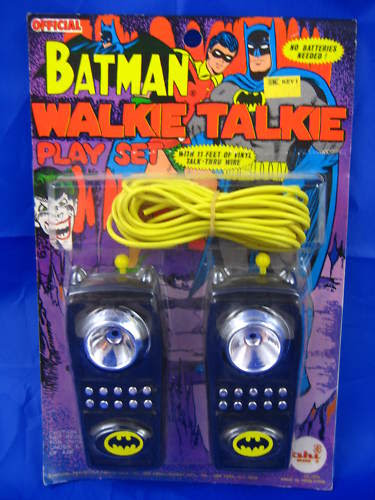 Next, it's this AHI-manufactured set of "walkie-talkies," which basically utilize the same technology as two tin cans and a piece of string. Card art is pretty nice, though! 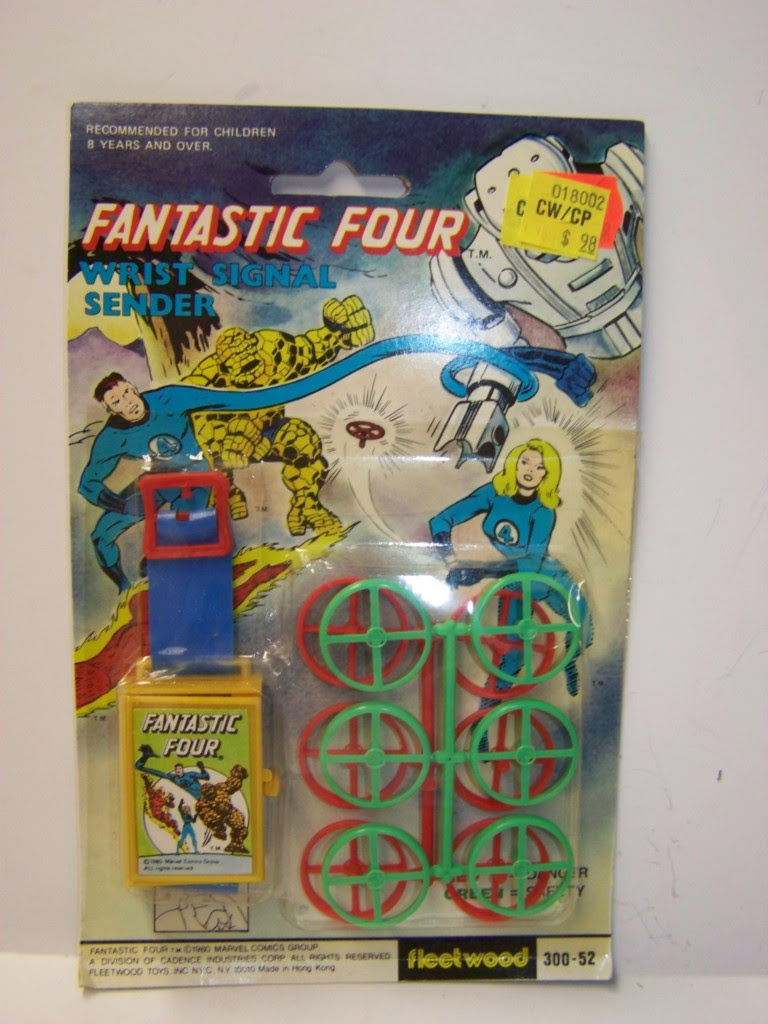 One of the great things about daily trolling on eBay for photos of cool items to share is discovering things you never knew existed, such as this Fantastic Four Signal Sender toy! Of course, it looks like all it really is, is one of those saucer guns adapted to fit in a belt buckle, but I do have to give them points for two items: 1) The FF did have their belt buckle "keys" for their private elevator in the Baxter Building, and 2) They did have a signal flare device (in those pre-cell phone days). So this is kind of a confluence of both concepts! Hmmm... I just noticed that the FF logo on this wasn't reproduced from an original logo provided by Marvel, but was rather a re-creation! 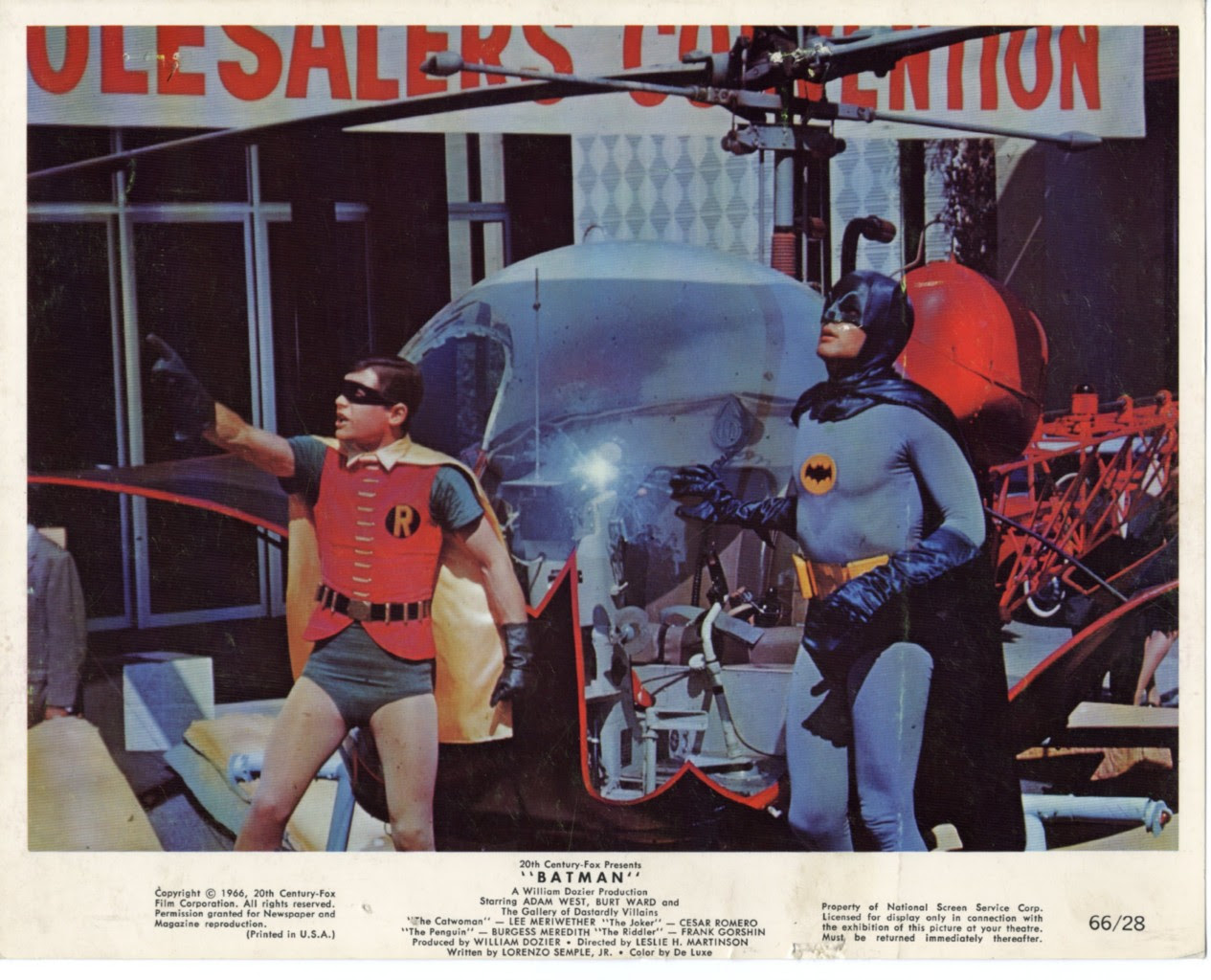 Next up, here's a still from the first Batman movie, and it looks like the scene is where the Batcopter has just crashed onto a big pile of foam rubber, thanks to the foam rubber wholesalers convention being in town!

So, that wraps up this volume of Cool Stuff photos! Next time, it's Volume 15 of my photo files! And you can bet it'll be alphabetized first!
Posted by Jon K at 12:01 AM