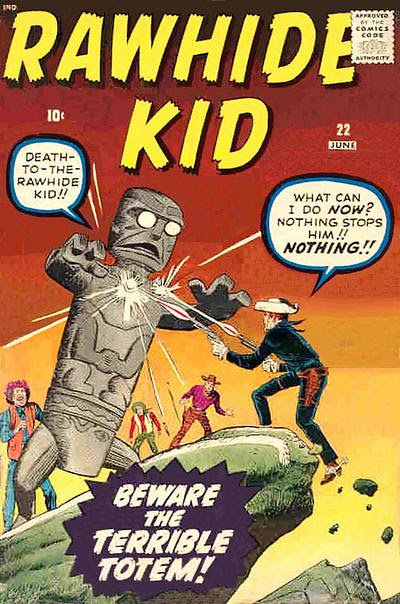 This edition of Kirby Kovers begins with Rawhide Kid #22, featuring the Kid battling a monster not too much unlike the type of monsters that had been drawn by Kirby and others in books like Tales of Suspense and Tales to Astonish! I'm not sure what Stan Lee (or whoever wrote this issue) was thinking, unless they wanted to see if having a monster on the cover would boost sales! 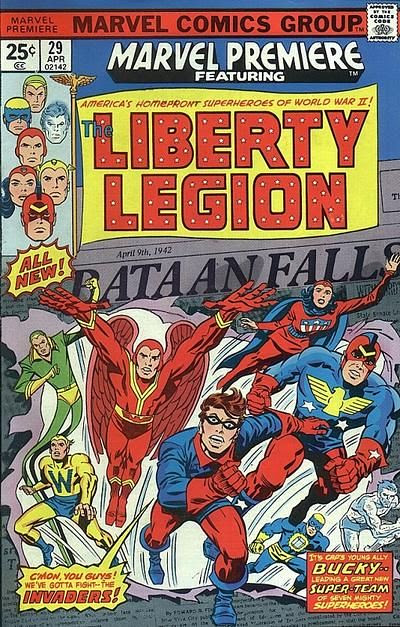 Next up, it's Marvel Premiere #29's cover, featuring the Liberty Legion! For those of you not in the know, the Liberty Legion was a spin-off of Roy Thomas' WWII-era book, The Invaders, which featured Captain America and Bucky, The Original Human Torch and Toro, and Sub-Mariner (with later members Union Jack and Spitfire). When Roy got the okay to do so (or perhaps the available space in Marvel Premiere), he ran a story in Invaders in which the Red Skull brainwashed most of the team (save Bucky) to operate as Axis villains! So, Bucky put the word out to all other superheroes in New York, and formed them into The Liberty Legion! The story went back and forth between The Invaders and Marvel Premiere for the rest of the story line, and then the Liberty Legion went on to later guest-star in later issues of The Invaders as well as an issue of Marvel Two-in-One. Anyway, this is a rather standard "super-team coming out at you" kind of cover, somewhat marrred (in my opinion) by the sheer volume of characters on the cover! I suppose one problem is just the sheer space taken up by the logo at the top, plus the blurbs on the bottom, space that could've been used for a more interesting layout. Miss America in particular looks rather constrained! 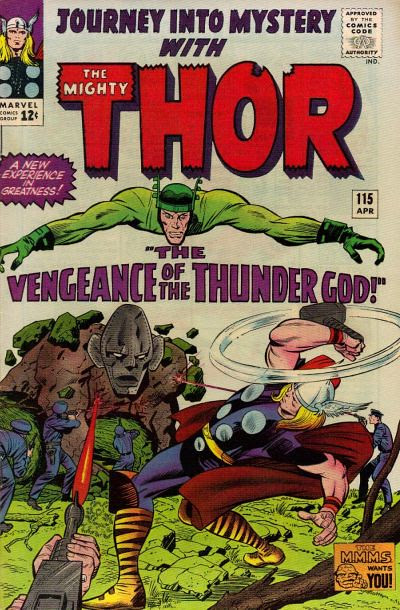 Next, we have Journey into Mystery #115! Now, I could well be wrong, but it certainly appears that the figure of Loki above the story title seems to be more symbolic than indicating he's actually there hovering over Thor and the Absorbing Man. You know, it almost appears that Jack intended it to be Loki holding the title, as if it were carved in stone or on a banner or something! Anyway, this cover features one of Kirby's most awesome representations of the Absorbing Man's power, if you ask me! And that's some wild pose Thor is in, isn't it? If it weren't for the gyroscopic effect of the hammer spinning, I'd imagine he'd fall right on his Asgardian Ass! 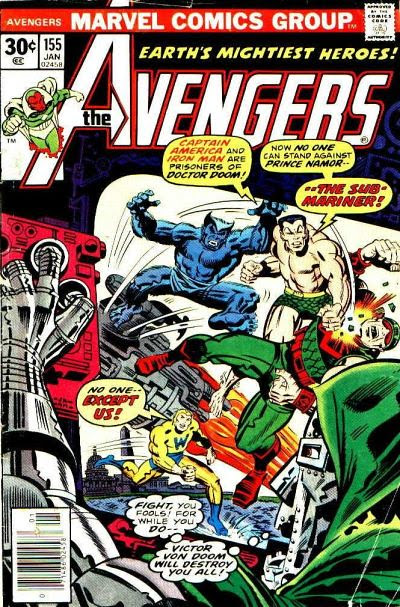 Hey, there's The Whizzer again, here on the cover of The Avengers #155! As you can see, joining the Whizzer (who was a hanger-on in the book at this time) are The Beast and Wonder Man, plus Namor and Doc Doom. This was a crossover with Super-Villain Team-Up, although I don't recall the latter book ever getting a Kirby Kover! Sadly -- and I don't know if this is because it was rushed or just didn't get the best inking possible -- it almost looks like someone aping or parodying Kirby's style rather than being by Kirby himself! Look at the Namor figure, for example... doesn't that look like someone copying Kirby's style to you?
Posted by Jon K at 12:01 AM