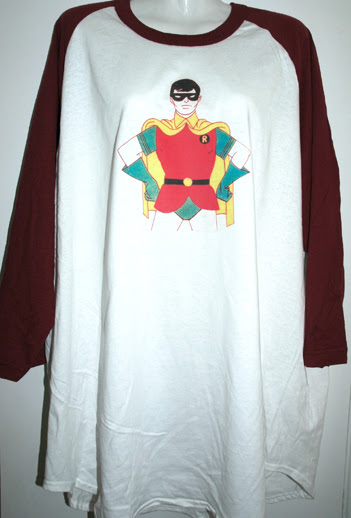 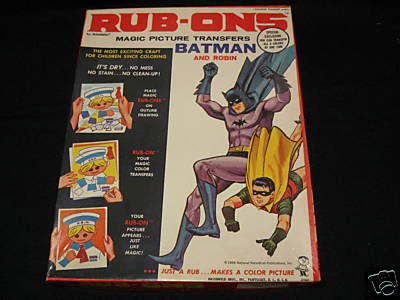 Here's a toy idea designed to get kids to try to talk mom and dad into buying it again and again... Rub-Ons! Obviously, once you've used them all, and hang up the results on thew all, you need to get another one (complete with the repurposed painted art from the Hasbro Batman board game box that makes it look like Robin is flying)! 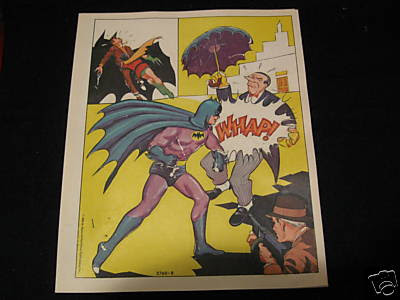 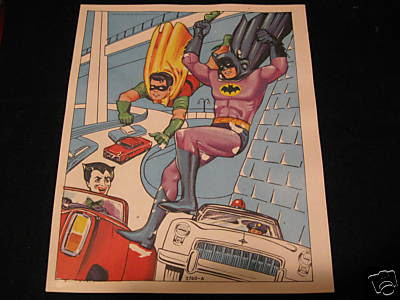 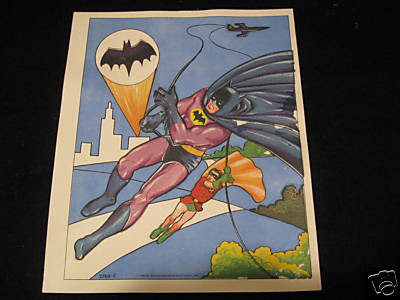 I'm not sure why Batman's tights are kind of purplish-magenta, though! 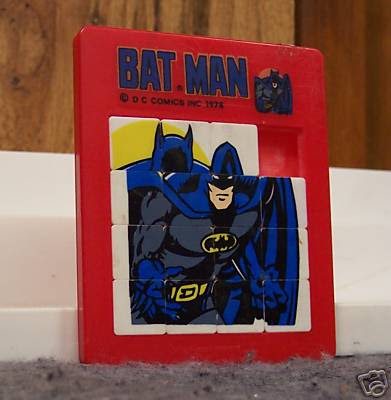 Whenever I post photos of a sliding puzzle, I usually make a comment about lazy eBay sellers who can't be bothered to actually solve them before taking their picture, but the seller of this one is the laziest of all -- they only had to move the top row over one space to be solved, and they didn't! 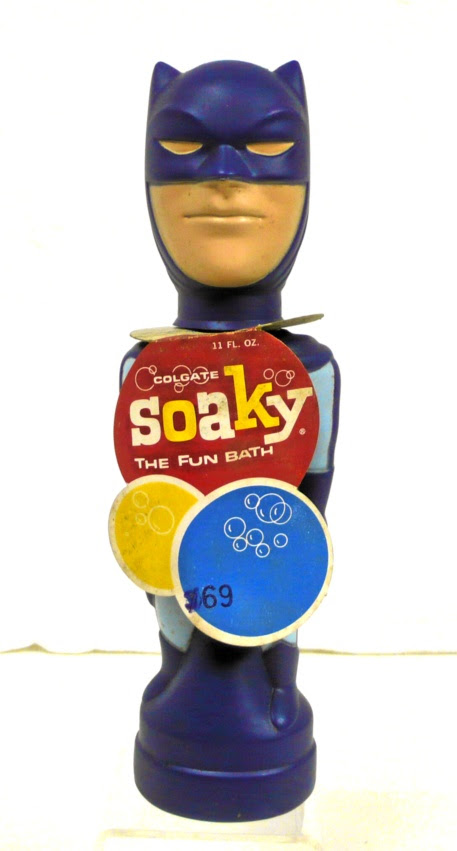 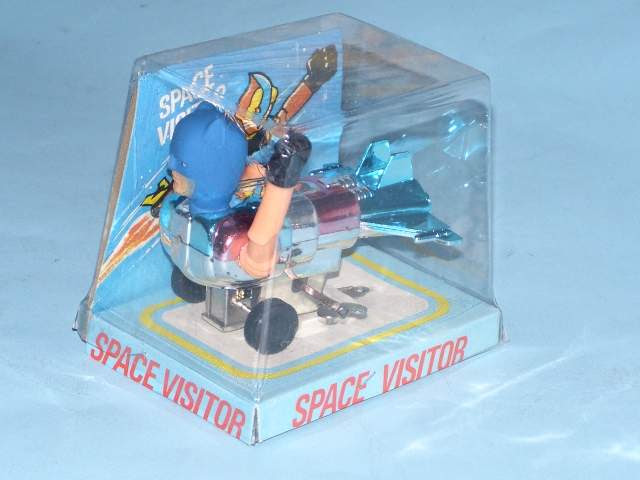 I can't even begin to explain this "Space Visitor" toy from Japan or Hong Kong... looks like a Mego Batman head stuck on a windup spaceship with Astro Boy's arms! Bizarrely enough, they also made a version with Superman's head. 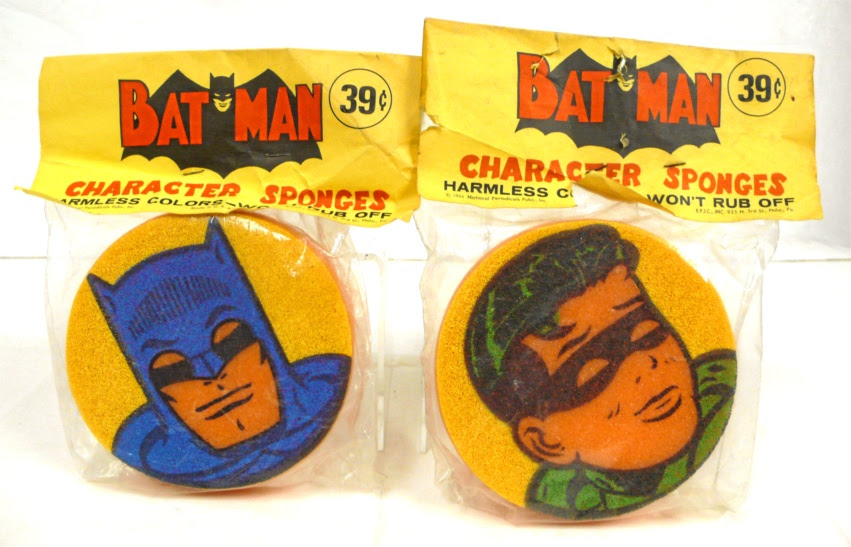 Next up are these Batman and Robin character sponges, a concept that I always feel is a bit on the creepy side... The Stardust Painting kits were basically a variation on Paint by Numbers, as you might've gathered. 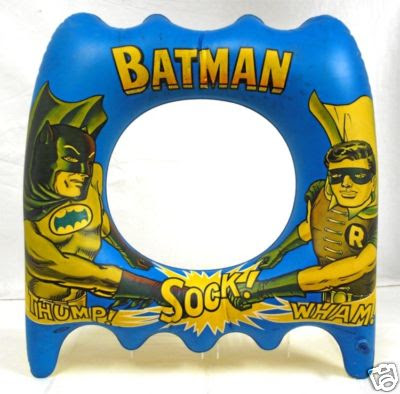 Batman swim ring -- I think an Aquaman one would make more sense, but he wasn't on ABC-TV twice a week then, was he? 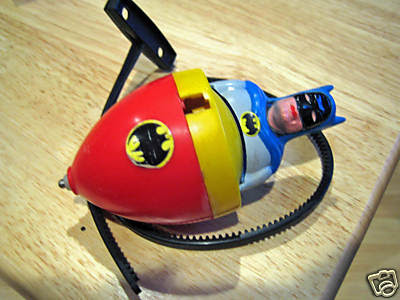 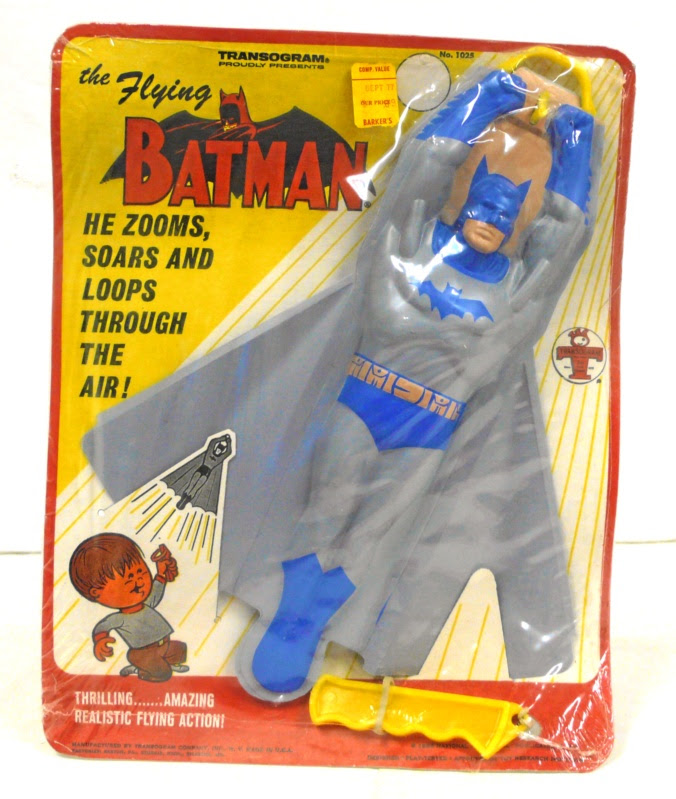 ...likewise no real explaining this Transogram flying Batman toy, except that maybe they just ad to alter their mold slightly from their Superman one, and Batman was big at the time. 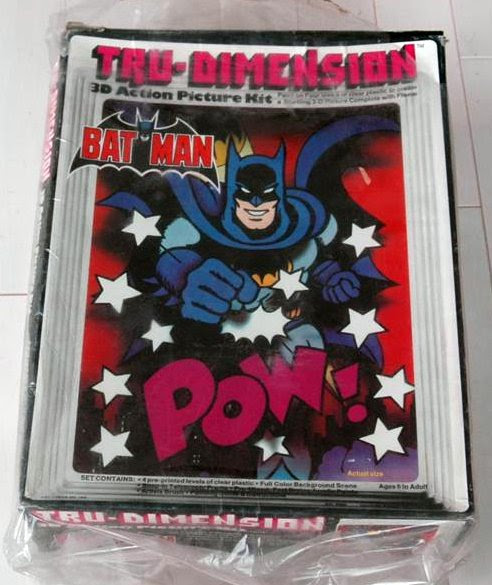 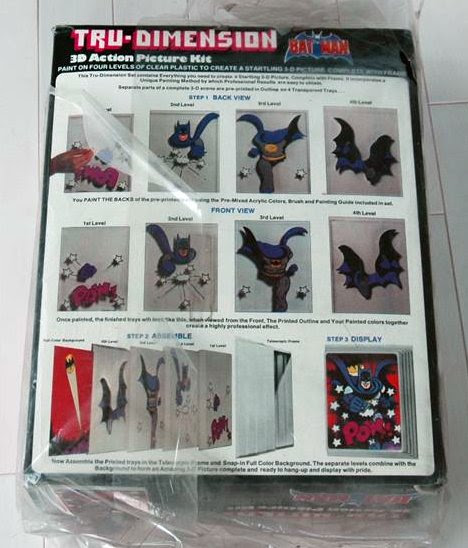 This Batman Tru-Dimension kit looks like maybe they should've designed a better image to work with. 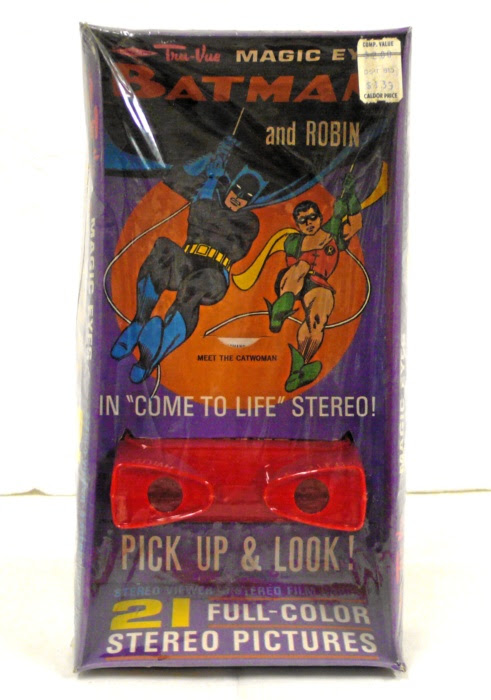 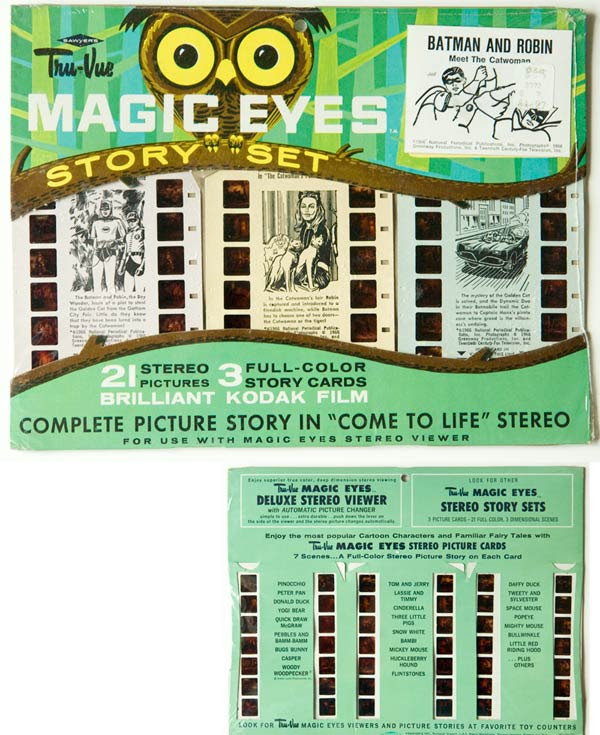 Here's the Batman Tru Vue viewer and card... and if you look on the back, you'll see it's the same thing as the later View-Master Batman reel set! That's because, as I understand it, Tru Vue was an early competitor to View-Master, and when they quit manufacturing, View-Master either bought them (and their licenses) out, or they relicensed their stuff. 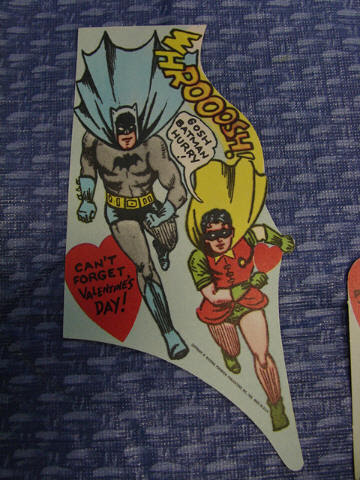 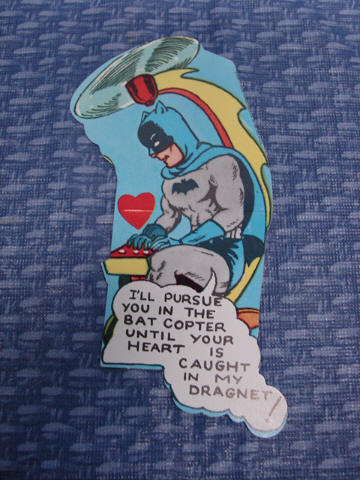 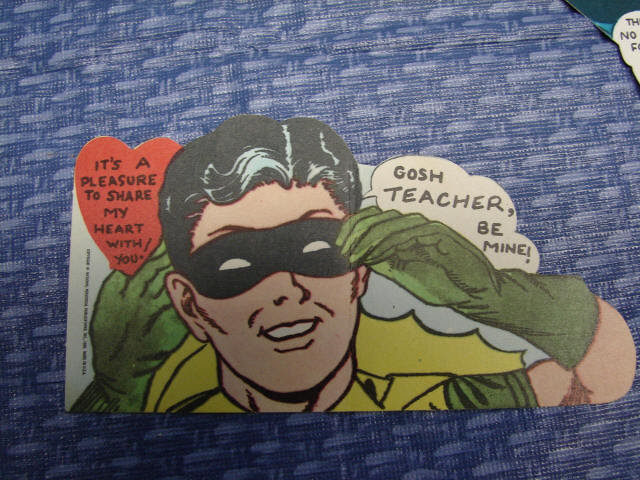 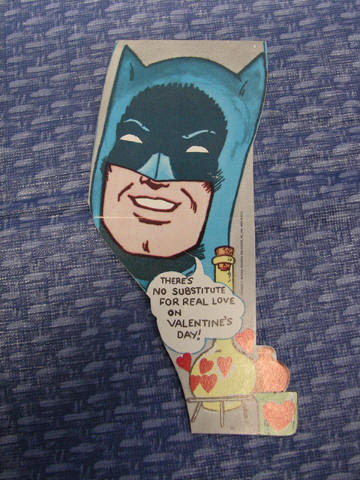 Here's some Batman valentines, obviously sold so that you had to punch them out, and they crammed in as much as they could on each page! That "pursue you in the Batcopter" one is a bit stalker-y, don't you think? 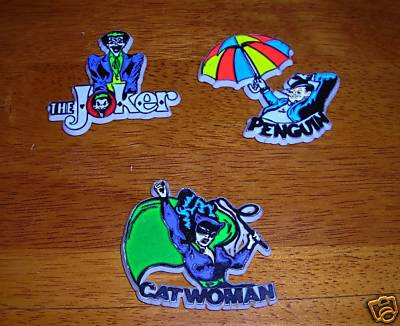 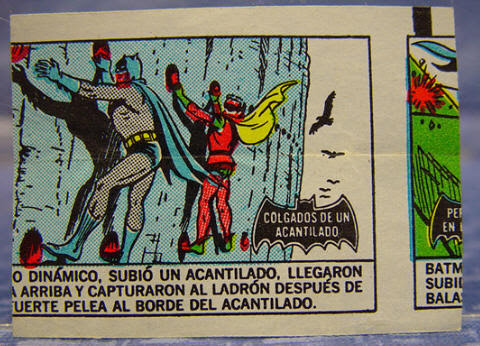 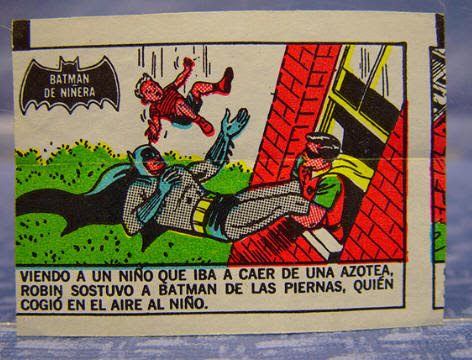 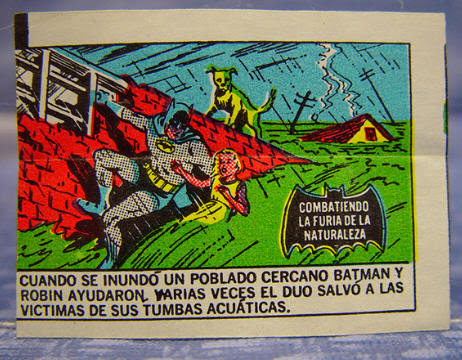 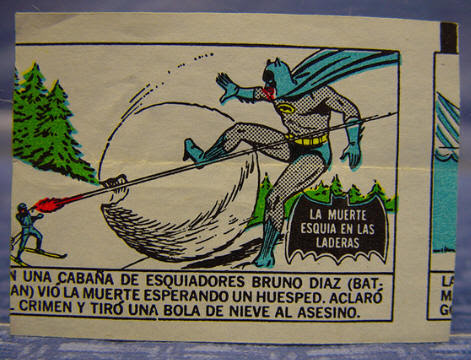 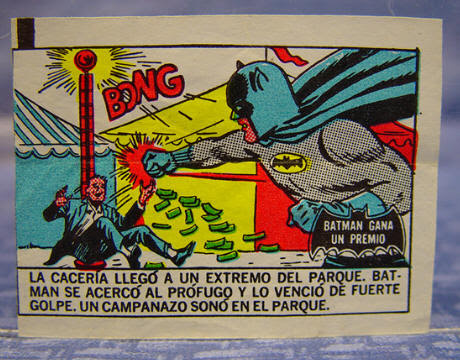 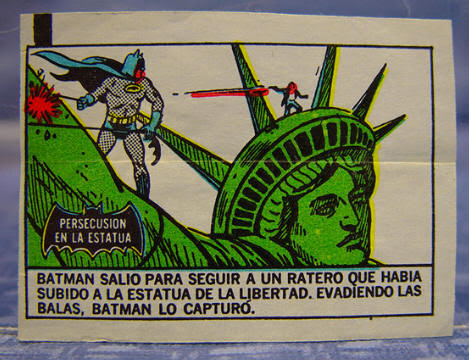 Here's seven examples of some foreign Batman comics printed on wax paper, like the Bazooka Joe comics here in the USA. I'm guessing these were made in South America, but what I don't know is if they were based on some US cards (with lineart instead of paintings), or if they were brand-new comics!