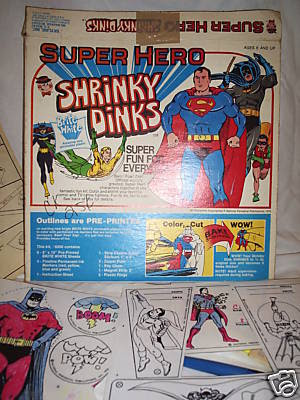 More DC stuff coming your way this week, beginning with this Shrinky Dinks set -- how the heck did I not ever see this one in the stores? Note that while Batman's bodysuit is colored (properly) gray on the box, the manufacturer didn't include a gray marker with the kit, so whoever first owned this made his bodysuit kind of a magenta! 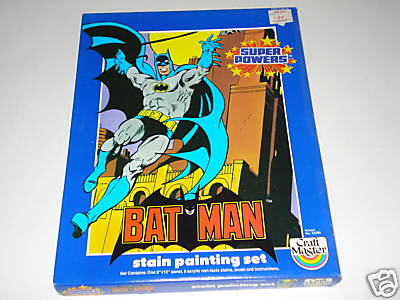 Next up, here's a Super Powers Batman staining set -- I wish the seller had taken a photo of the back of this, so we'd get a better idea of what this was about! 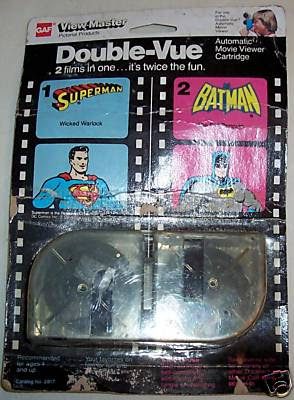 Here's an interesting kind of item I don't believe I've written all that much about before! So-called "movie viewers" had been popular since at least the 1940s and 1950s, although those were basically a hand-held viewer you'd look into with one eye and scroll through a film strip, one panel at a time. Along the way, there were other toys that projected these same kind of film strips, which eventually led the way to Kenner's Give-A-Show Projector and similar products (Marx Toys kept the film strip concept going with their Flashy Flickers toy). Kenner later came out with their Easy-Show Projector and variations, which let you project film loops in the privacy of your own room! Well, then came the 1970s, and since nobody seemed to see the home video wave coming, several companies started producing movie viewer cartridges and viewers (some viewers would only allow one person at a time to view them, while others back-projected it onto a screen). Kenner and Fisher-Price were the leaders here, but Ideal tried to get in the act with their Pocket Flix, and View-Master -- not satisfied with their nearly exclusive marketplace position so far as stereo viewers went -- came up with their Double-Vue, which apparently didn't do so well, despite getting heavy-hitters like Superman and Batman (I'm guessing those are Filmation cartoons being used, although I suppose they could be some segments from Super Friends). 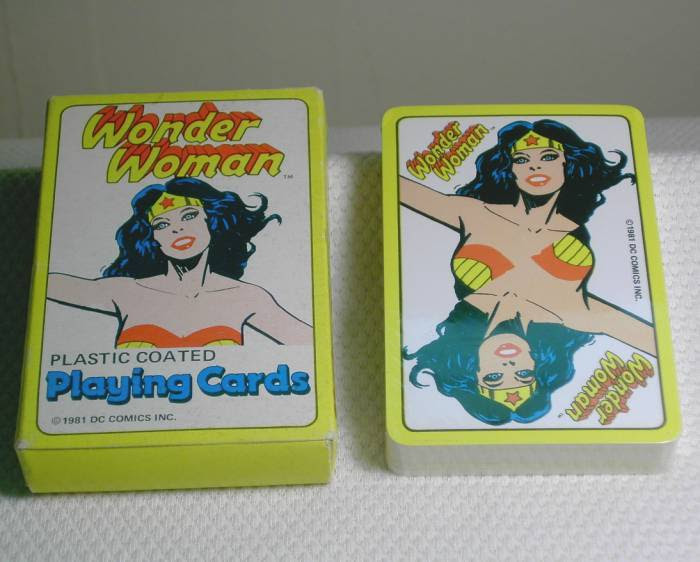 Next, the first of several Wonder Woman items! First up is this deck of playing cards -- and wow, does that look weird the way they divided up the backs of the cards! 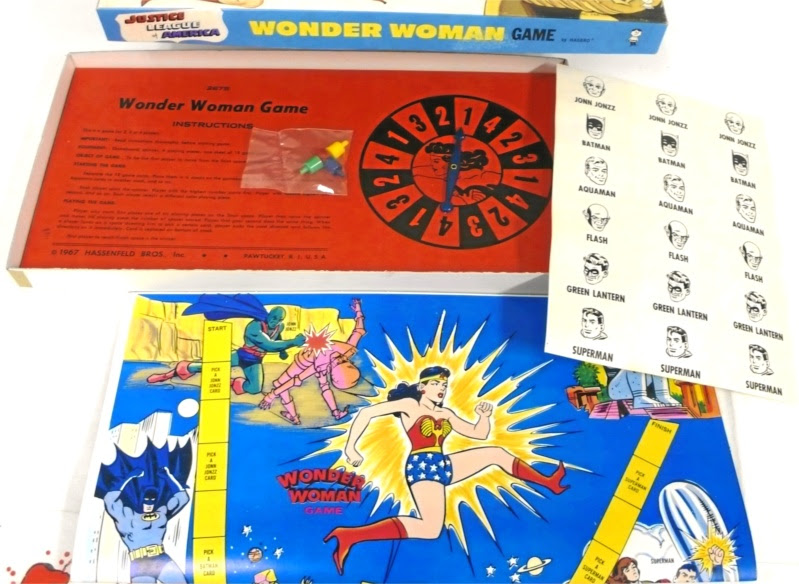 Perhaps the most valuable item in today's installment would be this Wonder Woman board game, which also featured her fellow Justice League members! 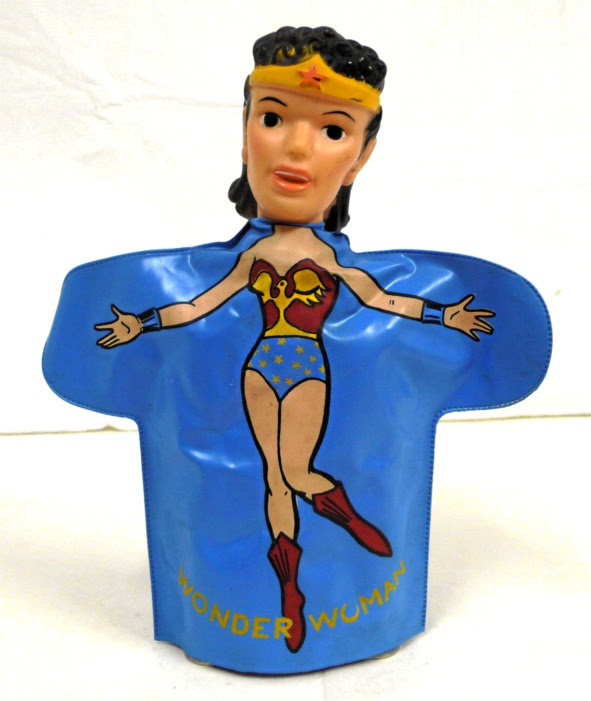 Ideal made this Wonder Woman hand puppet, just as they'd made puppets of Superman, Batman and Robin! 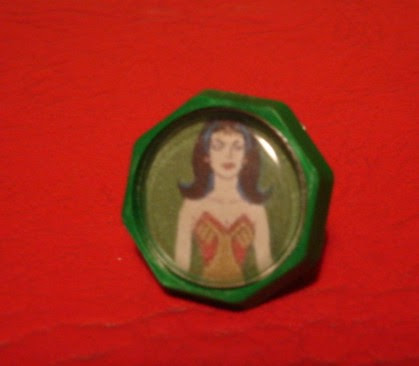 This plastic ring featuring a Super Friends version of Wonder Woman was, alas, only made and offered in Argentina -- which I'd imagine means it would go for a pretty high price itself!

That's it for the DC items, now it's time for Dick Tracy! 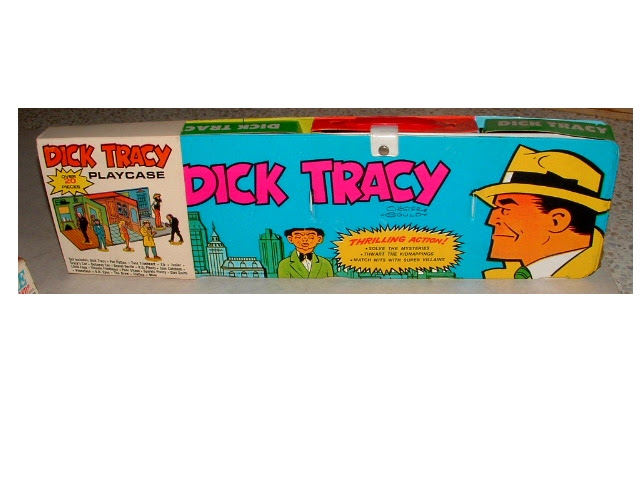 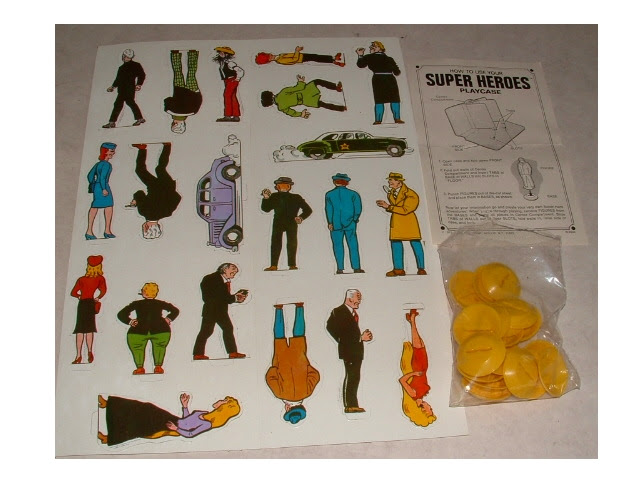 It's amazing what you can find on eBay if you look long enough... I'd seen playcases in this style done for Batman and Spider-Man (and I think even Superman), but I had no idea there had been a Dick Tracy one -- and it doesn't even feature the offensive stereotypes from the cartoon! 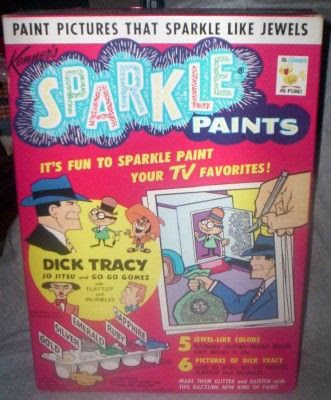 Can't say the same thing about this Sparkle Paints set, though, can you? 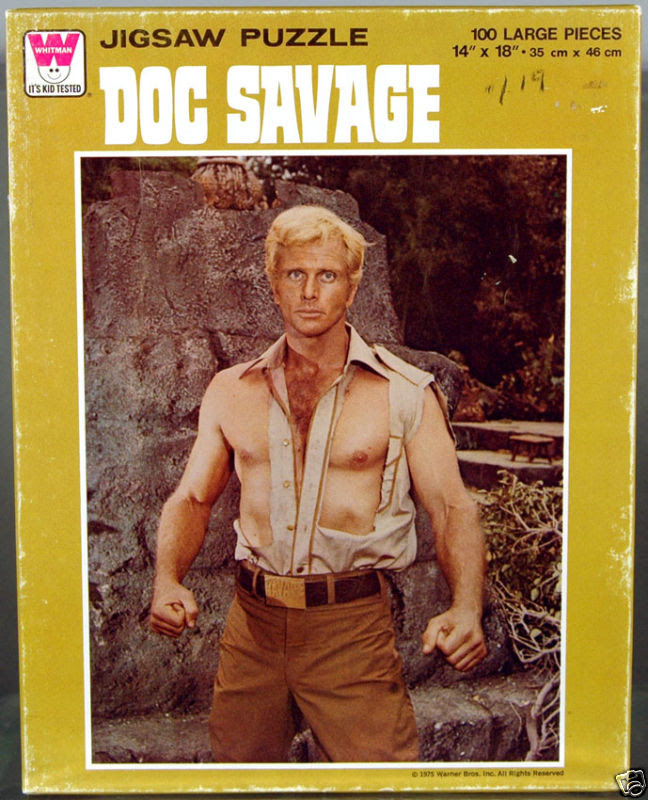 This Doc Savage puzzle was one of the very few items of merchandise based on the George Pal film! And that reminds me of a story... Somehow, I didn't become a fan of Doc Savage until after both of the Marvel Comics series were here and gone, nor did I see the movie in the theatres. Oh, I'd heard of Doc -- you could hardly avoid it when you read about comic book history -- but I'd never read a single story! Until one day, I happened to be at the local Goodwill with my mom -- this must've been about 1978 -- and I found copies of The Man of Bronze and The Thousand-Headed Man. The price was right, and I bought them, and began collecting all the Doc novels I could find. Not too much later, I was at my local Kmart, and found this very puzzle on the shelves (probably on some kind of clearance price), and bought it. At one point, I had all but about three or four of the Bantam Doc novels! Unfortunately, some years ago, when I was broke, I foolishly sold my entire collection of Doc novels for only $120 or so -- if I'd put them on eBay, I could've realized at least three or four times that amount, but I really just wish I'd never sold the in the first place!

Speaking of the Easy-Show Projector, as I was a few photos back, here's a few of those! 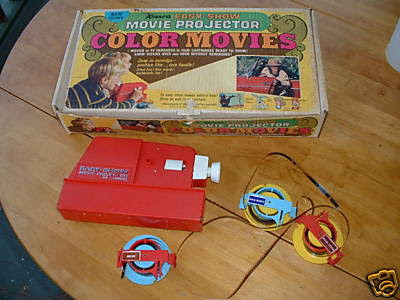 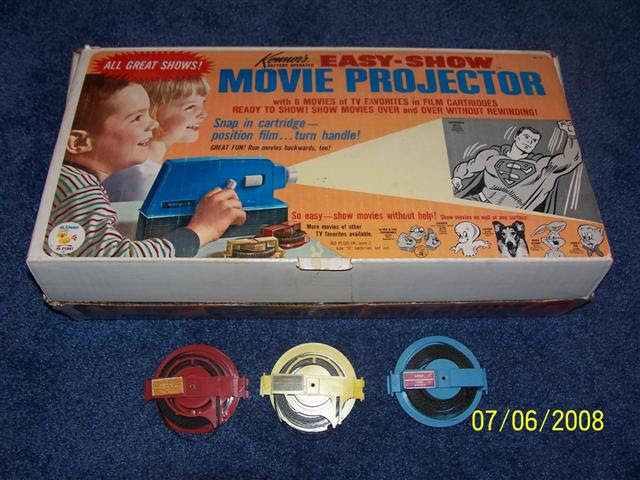 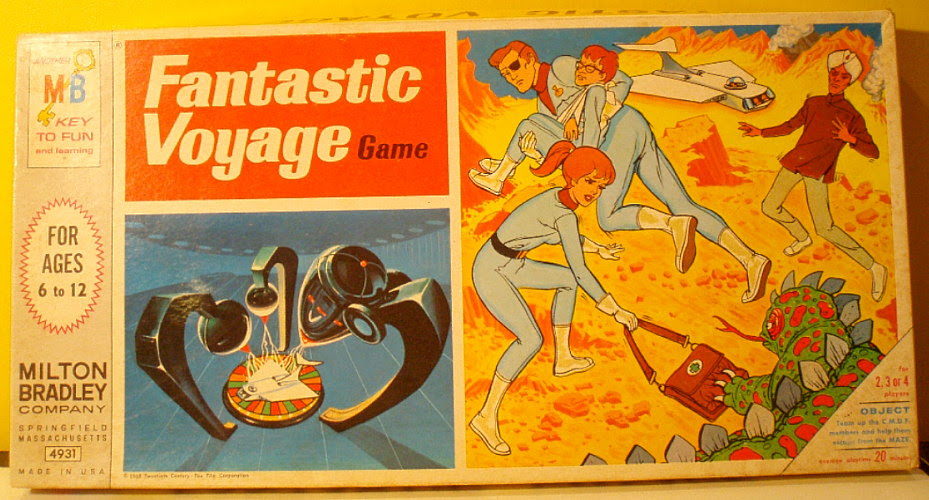 Next up, it's the Fantastic Voyage board game! I think there were only four pieces of merchandise based on this Filmation series: the board game, the model kit of the sub, one or two issues of a Gold Key comic, and View-Master discs.

How about a mini-gallery of fanzines to round out this week's installment? First, it's Comet #1, and that sure looks like the Alter Ego mascots on that cover, eh? 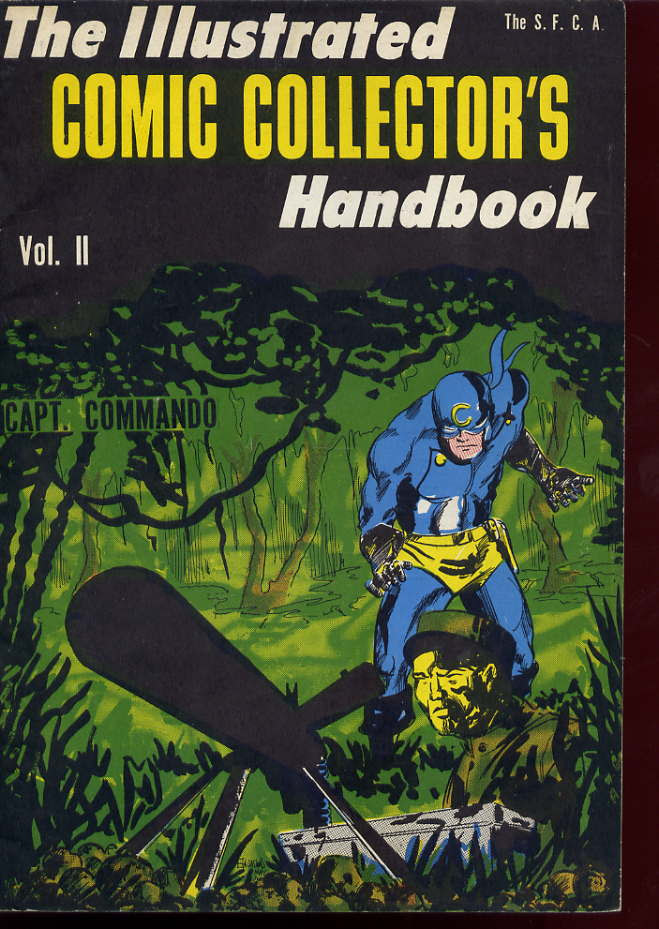 Next, Comic Collector's Handbook #2, and I believe Capt. Commando was an Archie superhero of the golden age! 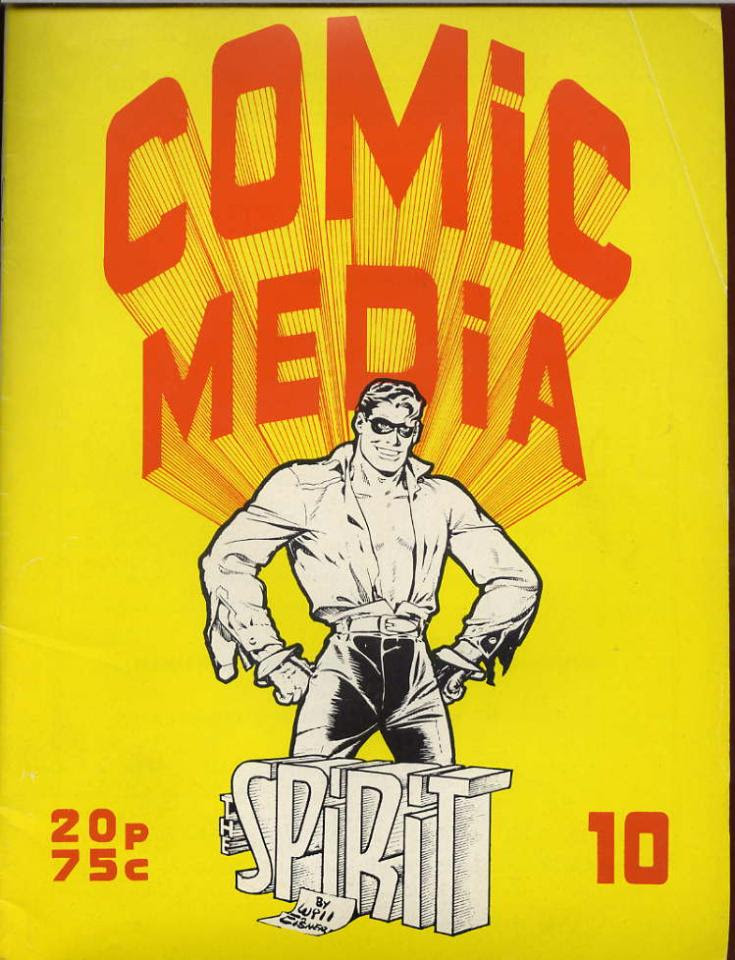 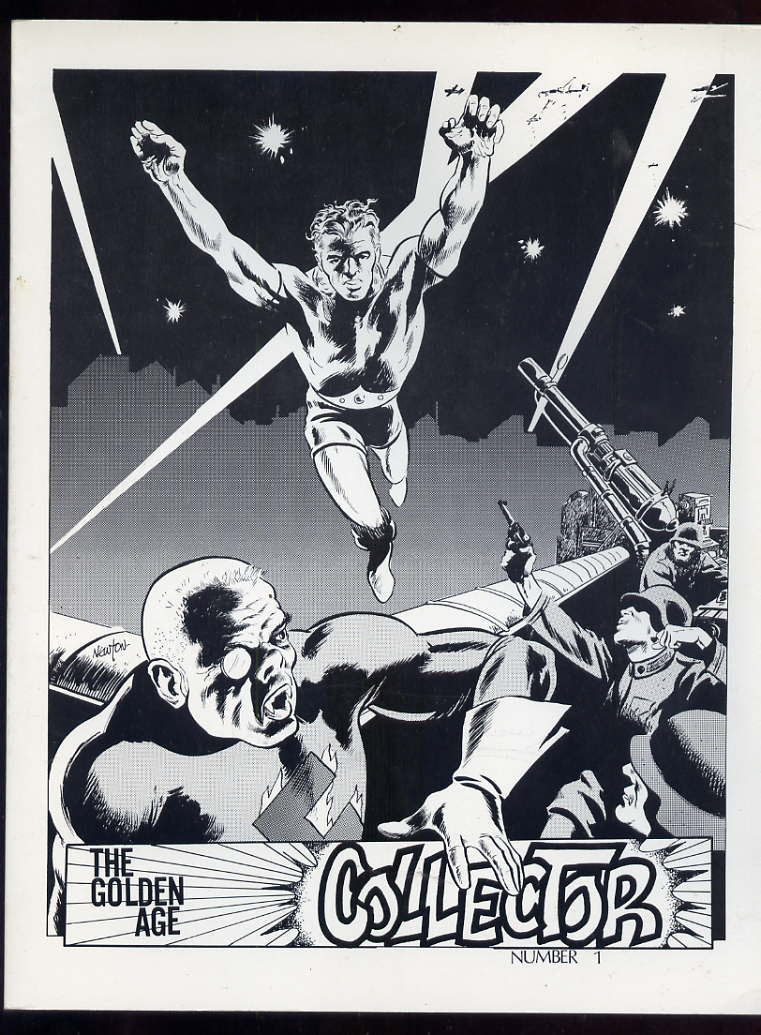 The Golden Age Collector #1! Looks like Steel Sterling on the cover! 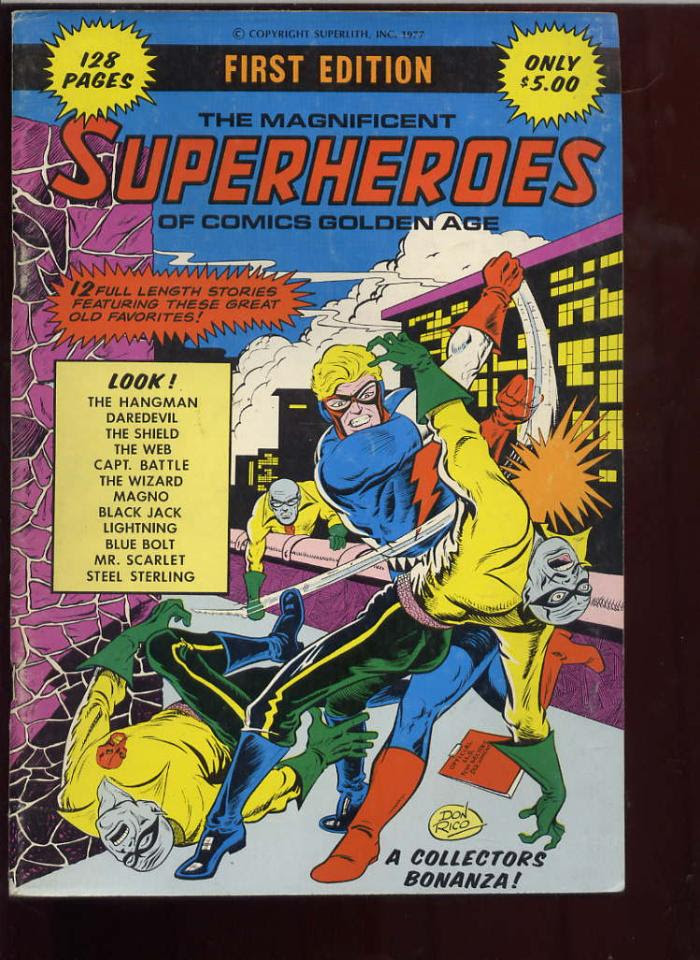 I honestly wish I could remember whether or not I ever had a copy of this book, Those Magnificent Superheroes of the Golden Age! I doubt any if it was authorized, but I still wanted this fanzine! 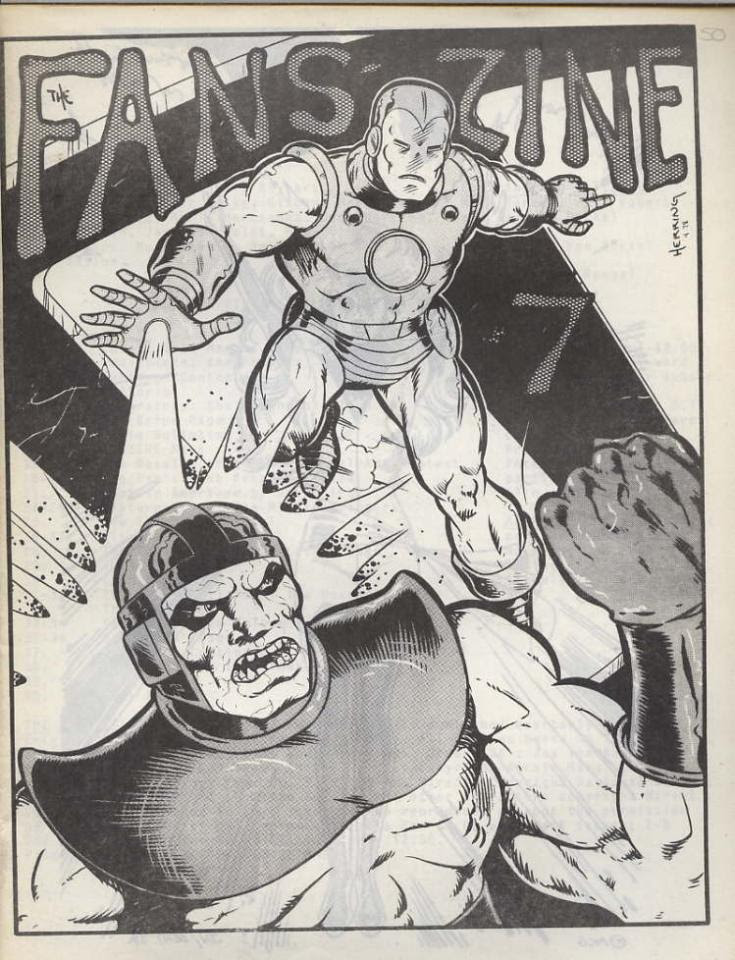