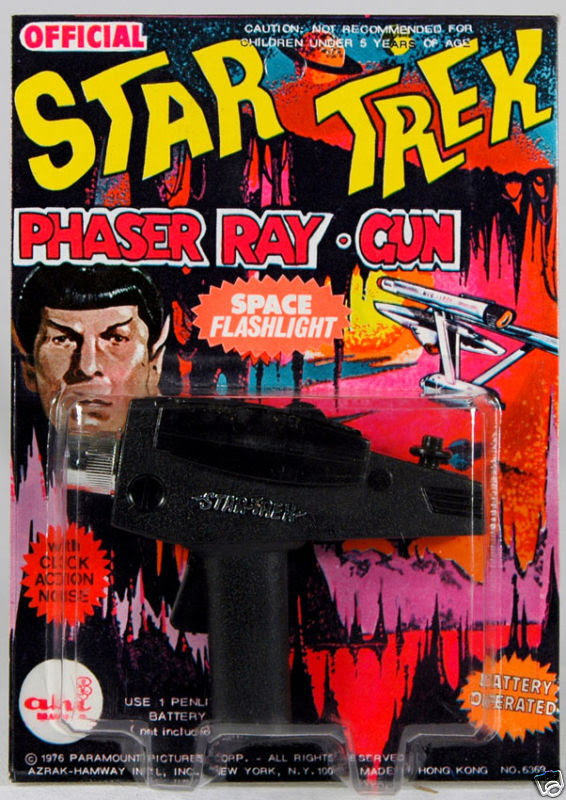 This week, the Toy of the Week feature looks at some of the various Phaser toys that AHI produced, beginning with the one above: The Phaser Ray-Gun. This basic toy was simply a flashlight mounted into a phaser, that used a AA battery to power it (which I believe went in the handle). Of course, like many toys of this kind, it was scaled to children's hands, and not adults. You'll note that there's a Star Trek logo on the side that kind of/sort of matches the logo on the packaging, which itself was based on the Gold Key Star Trek logo! You'll also notice the complete lack of nozzle on the front of this phaser, something I definitely noticed when my mom bought one of these for me! Still, it was a phaser that made a light, and I was more or less happy with it (my brother, who got a Space: 1999 version, was probably happier, as his wasn't missing such obvious details). Neither version made an appropriate sound - you might notice the "with CLICK ACTION NOISE" on the burst, and that was pretty lame, but what can you expect out of a rack toy, anyway? The background image on this is really quite bizarre, too... there's Spock's head floating above what looks like a jungle planet, with the Enterprise and a Klingon Battle Cruiser (the blue ship, if I'm not mistaken, just above the butt of the phaser) about to engage each other in battle. Nice coloring on the card, though! 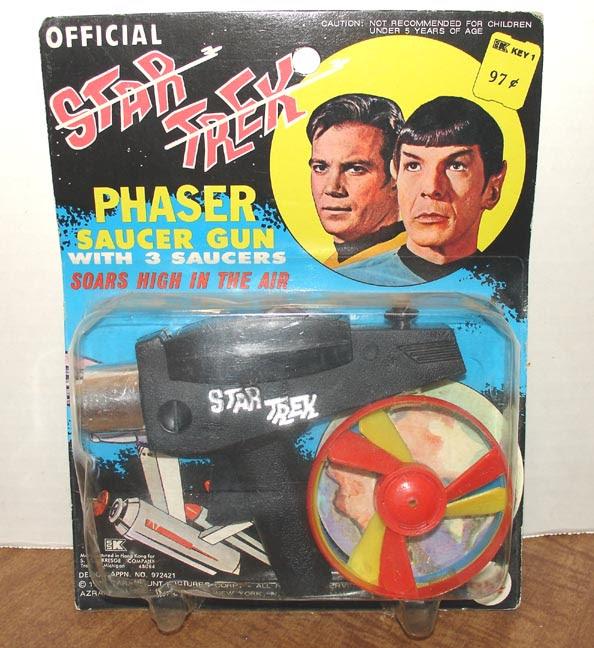 I'm pretty sure the Phaser Saucer Gun pre-dated the flashlight gun, based on the design of the packaging, with so many elements from the Gold Key Comics you'd think they had some kind of agreement going, unless AHI simply "borrowed" the images they used! The Enterprise on the card (mostly hidden by the toy) had to have been done at AHI, though. Oddly enough, this phaser toy doesn't seem to use any of the same parts as the flashlight -- one would've thought that a different set of "guts" and firing mechanism, perhaps the addition of an opening on the handle to accommodate the flashlight's batteries, and they could've saved some money, but no! This appears to be completely different in every way, shape, and form! Scroll up and down and you'll see that even the chrome firing nozzle at the front is different -- this one is smooth all the way around! Of course, it's basically a standard saucer gun, and certainly AHI didn't intend for anyone to use it to shoot at their siblings (but I'll bet they did)! Below is the saucer gun out of the package: 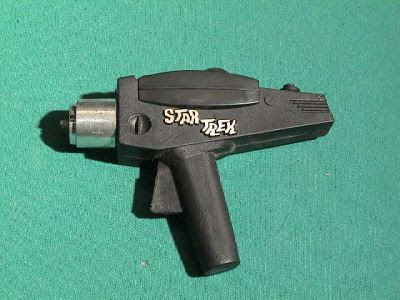 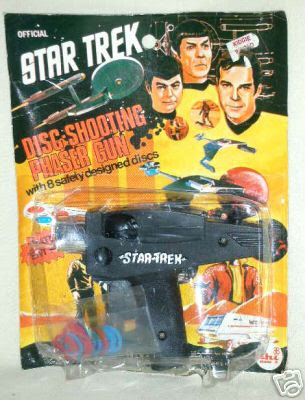 The Disc-Shooting Phaser Gun must've been produced towards the tail end of AHI's heyday, given the adveancements in the design of the card. This wasn't the first disc-shooting gun to be marketed as a Star Trek Toy, of course... there was an earlier one (I think it was later manufactured as a "Tracer Gun") that looked nothing like a Phaser! You can see that below: 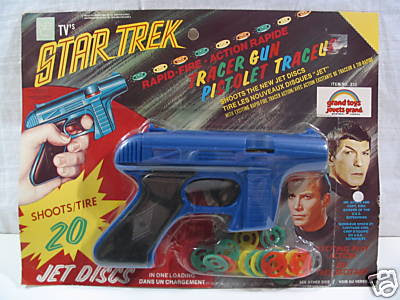 The last of the Phasers that AHI produced (so far as I have in my files, anyway) is the Phaser Squirt Gun, and the colors went wild here! 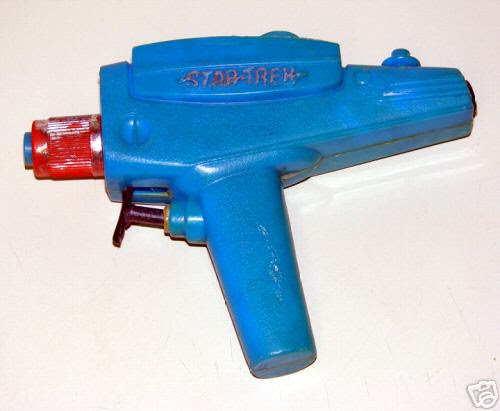 Blue and red indeed... again, there's no consistency from one to the next, they all have the Star Trek logo in different places!

Now, AHI -- even though they are known for their rack toys -- was actually the parent company of Remco, believe it or not! As such, there were some shared licenses between them, and Remco produced a fair amount of Phaser toys, as well... but we'll get to them a long time from now, I think!
Posted by Jon K at 12:01 AM