I'm sure this ad will bring back some fond memories for many of you... 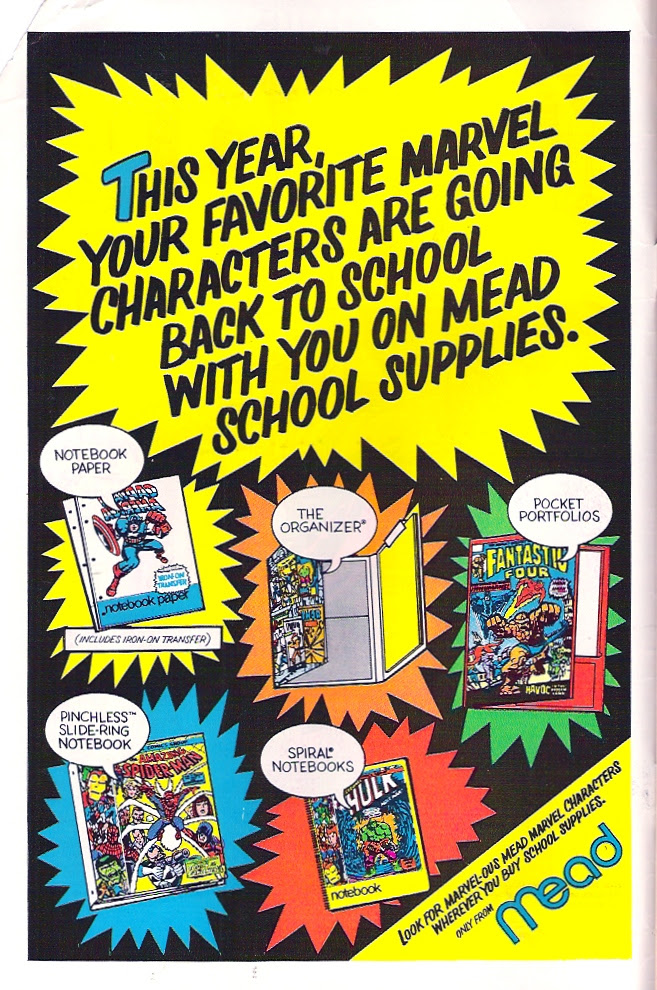 Ah, 1976... truly a glorious year to be a comic book fan (for that matter, pretty much the whole 1970s were great for being into comics). DC and Marvel were not only trying different things in their comics, they were also reprinting some classic material from the past (Marvel definitely took the lead here, having started in the 1960s with Marvel's Greatest Comics and Marvel Tales, but expanding those books in the 70s, but DC made up for it with the 100-Page Super-Spectaculars)... and the level of superheroes merchandising reached a level that I don't think has ever been matched since (at least, so far as merchandising featuring a variety of characters... there were the Batman booms of the 1960s and 1980s, but that was all Batman). And then, in 1976, Mead made it easy for geeks to make our geekery known to our fellow students with their line of Marvel Superheroes school supplies! Notebook paper with iron-on transfers! Organizers! Pocket Portfolios! Three-Ring Binders! Spiral Notebooks! Could it get any better?

Movie of the Week: Teenage Caveman! 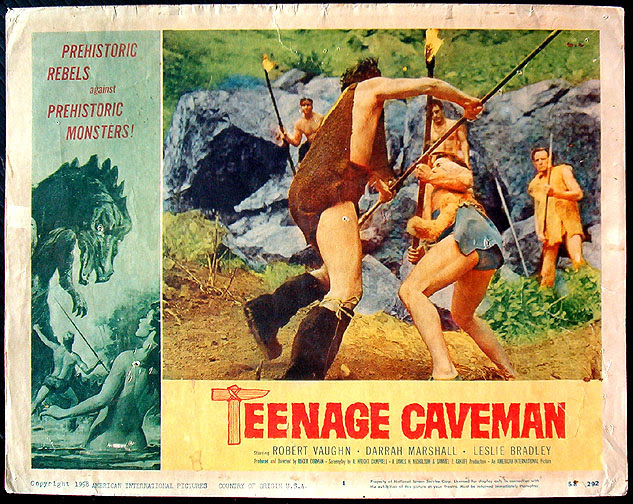 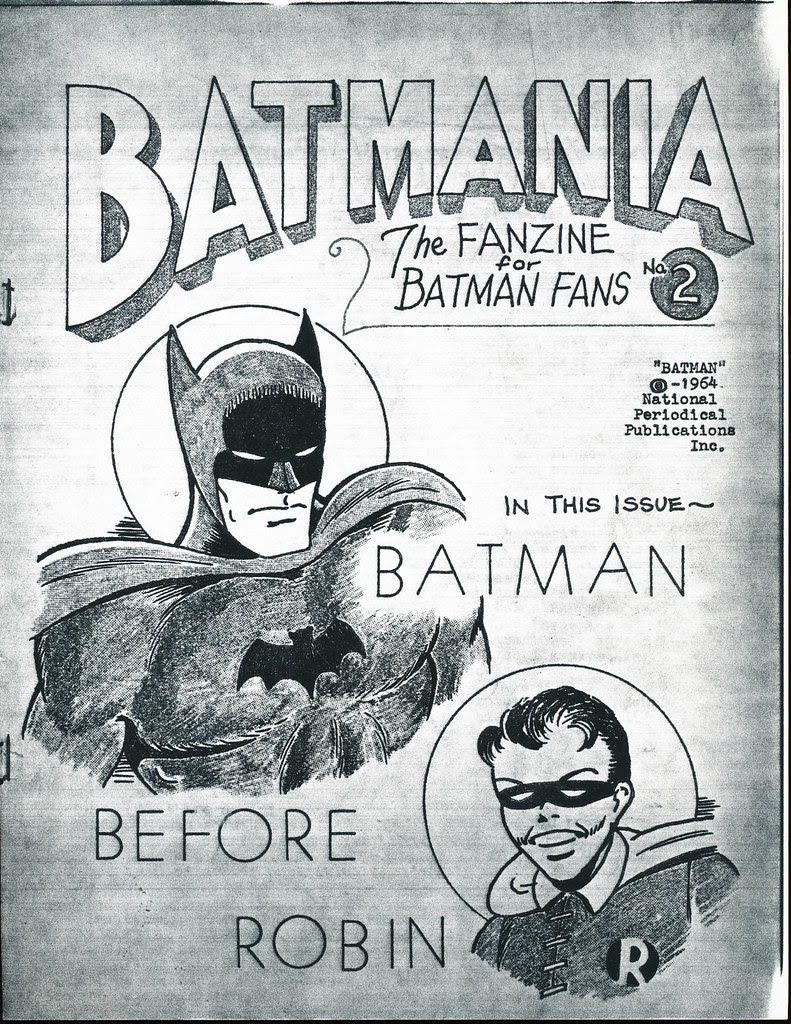 The Way of the Geek 13: Siskoid, AKA Michel M. Albert!

Michel M. Albert, or “Siskoid,” as he's better known, is the mastermind (if you will) behind Siskoid's Blog of Geekery, one of my personal favorite daily stops as I'm exploring the blogoverse! I'll be referring to him as “Siskoid” through this article, since that's how most of us know him.

Siskoid was born in Quebec City, but was mostly raised in Edmundston, New Brunswick, with summer vacations spent in Ballinger, Texas. He said, “I like to think of myself as an army brat, without the army.” He's lived in Moncton, New Brunswick for 20 years. He's the oldest of four siblings (one a half-sibling), and is not married. He works as a communications director for a university student union.

Siskoid's geekery ranges from movies, science-fiction (originally Star Trek was his biggest obsession, as can be evidenced by the lengthy series of ST-related posts on his blog that concluded a few months ago, but Doctor Who has won out as top SF obsession for him), comics, role-playing games, music, collectible card games, and toys, nearly all of which are reflected in his posts.

Siskoid said that his geekery began at the age of 3 ½, when he was learning to read. He was given French/Belgian comics to read, mostly Tintin and Asterix. “They didn't realize what they started by putting those hardcovers into my hands, probably,” he recalled. He said his earliest memory of geekery was sitting on a plane reading a late Tintin book, “Coke en Stock,” that he figures didn't make sense to his four-year-old brain.

And now, the conclusion of the Wonder Woman tale! 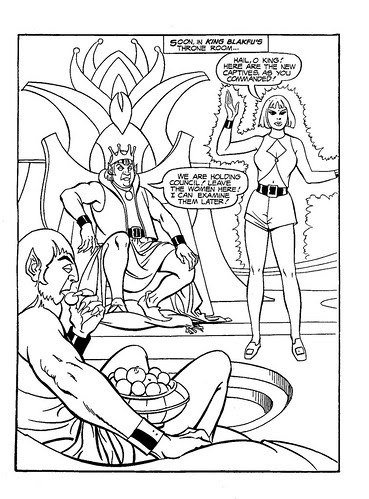 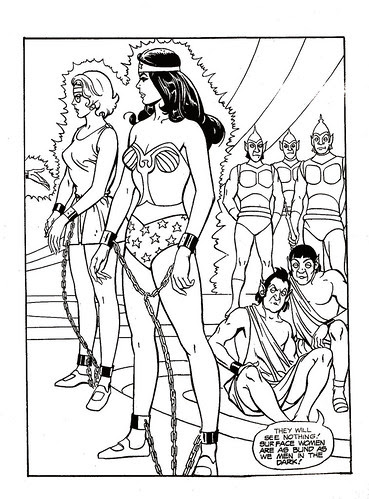 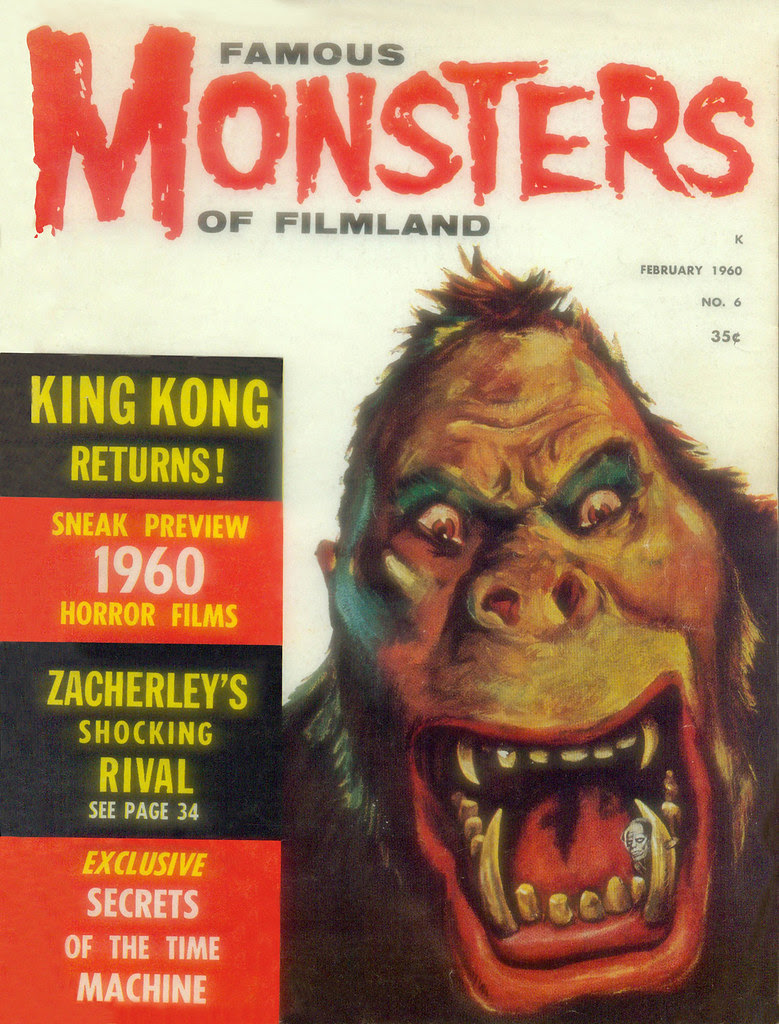 It's Wednesday, time to check out a monster magazine, and this time around it's Famous Monsters #6!

Today sees the last of the awesome Japanese toy commercials featured in the Random Videos of Geekery... check them out after the jump!

Ah, another parade of cool things I saw offered for sale on eBay that I couldn't afford to buy... your mileage may vary! 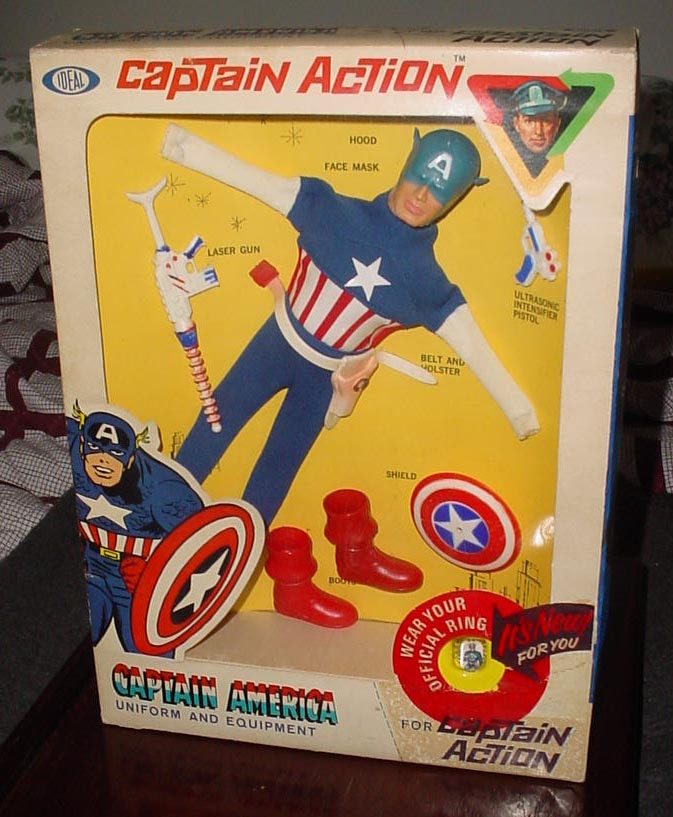 First up, it's the Captain America disguise for Captain Action! Just in case any of you don't know who the good Captain (Action, that is) was... he was a genius concept from the late 1960s, a fully-poseable action figure (more poseable than GI Joe, even) that could be disguised as a number of different comics characters, from DC (Superman, Batman, and Aquaman), Marvel (Spider-Man, Captain America, and Sgt. Fury) to other publisher's characters from comic strips and other sources (Flash Gordon, Green Hornet, and others). No way could the multiple licenses work these days, sadly... 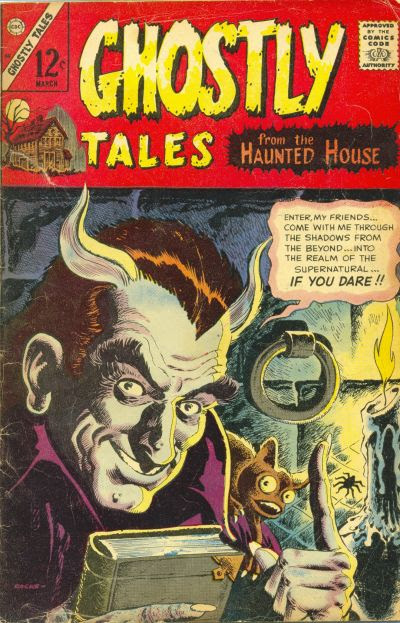 This one's a bit of an oddball... it actually took over the numbering of Charlton's Blue Beetle series with issue #55, but since I've apparently already done Blue Beetle (in some form or another), this one starts out with #60!

Dog of the Geek: Mumbly! 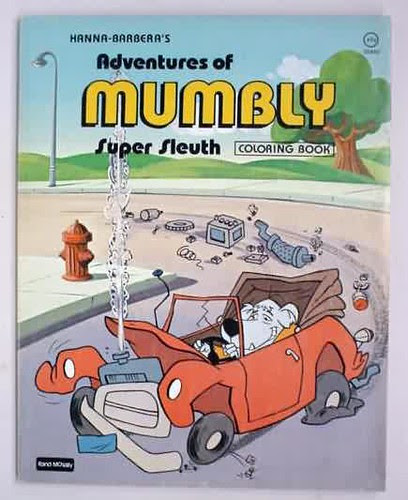 Biography: Mumbly seems to have switched sides during his cartoon career. Originally, he was a police detective dog, working for police chief Schnooker, possibly inspired by Columbo. However, in Laff-A-Lympics, he suddenly appeared as the captain of the villainous Really Rottens team, with the Dread Baron as his right-hand man. Mumbly and the Dread Baron also were the villains in Yogi Bear and the Magical Flight of the Spruce Goose.

Miscellaneous: No explanation was given for why Mumbly switched sides in the cartoons themselves. It is possible that the reason Mumbly and the Dread Baron were used in Laff-A-Lympics instead of Muttley and Dick Dastardly is because the latter duo were created as a co-production with Merrill Heatler and Bob Quigly Productions, so Hanna-Barbera did not fully own the characters. Along with the strong resemblance to Muttley visually and vocally, this is probably why there's most of the confusion between the two characters. 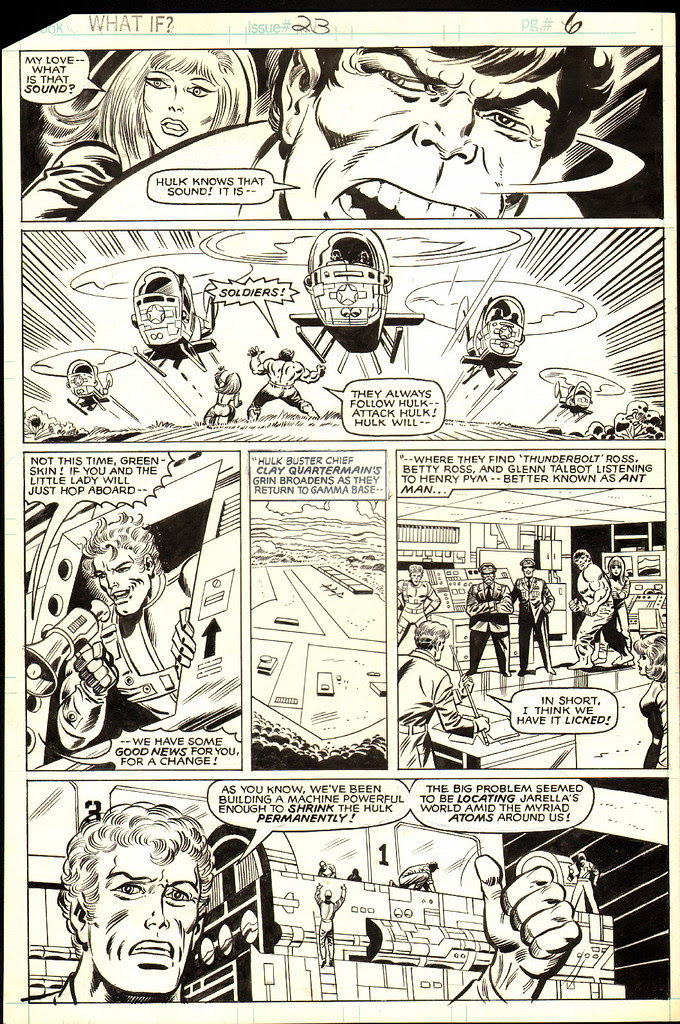 Let's see what's in store for this week's installment, shall we? 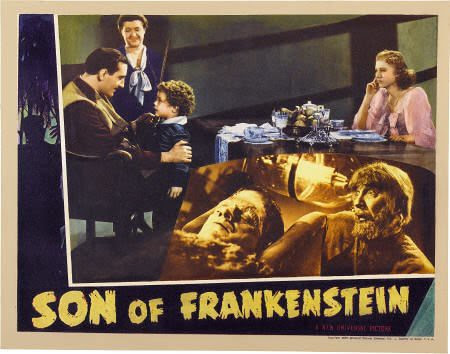 Ah, that's right, we're starting off with some "Son of Frankenstein" materials! That's a lobby card above, and there's more lobby cards (and other monster stuff) after the jump! 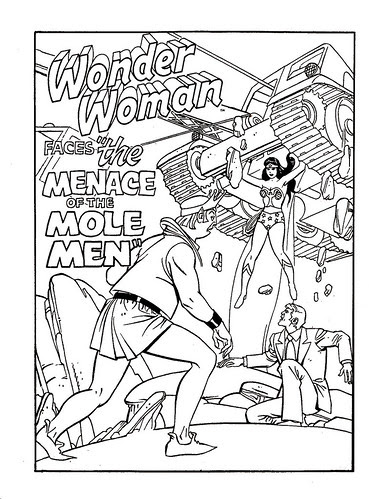 Time for the Wonder Woman tale in the 448 Page Superheroes Big Big Book! As with the Batman and Superman stories, this one had also been previously printed: 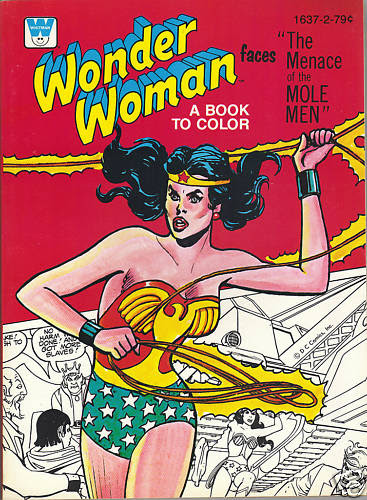 And there may have been an earlier printing of this, too! I know I have a tabloid Wonder Woman coloring book around here somewhere that may have this same story in it. 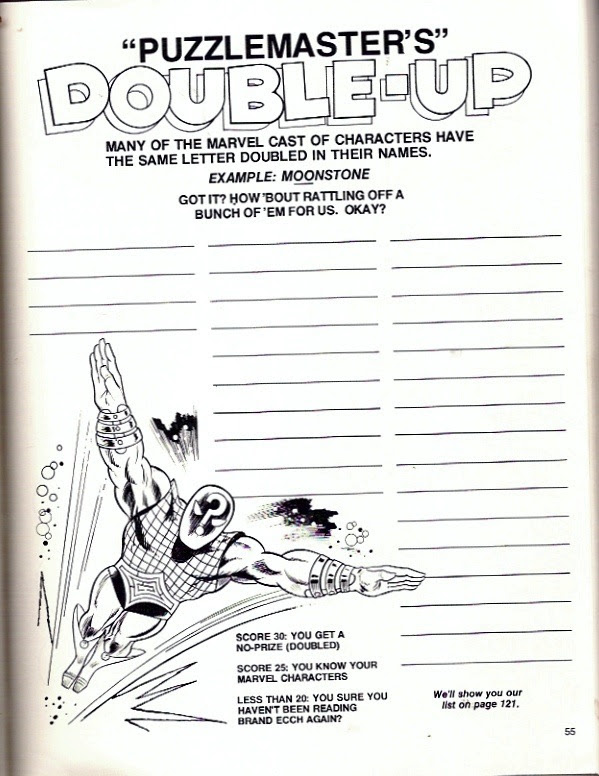 This time around, we start looking at Prize Comics' Frankenstein Comics #1! This series started in 1945, and was edited by Joe Genalo. At Prize, the Frankenstein monster (or simply, Frankenstein) began truly as a monster – in fact, at one point in his Prize Comics career, he battled several of Prize's own superheroes! – but then the series shifted tone, the monster was calmed down, and it went from being a horror comic to a humorous one, which is where we join Frankie's career! Of course, things go in cycles, and by the time this series ended after 33 issues, Frankenstein went back to his monstrous ways! Also by that time, the book only featured a lead Frankenstein story, with the remainder of the book filled with non-Frankenstein horror tales. But at this point, the full-length stories all feature Frankenstein, and there are four in all! The cover of this issue was drawn and inked by Dick Briefer, creator of this version of the monster.