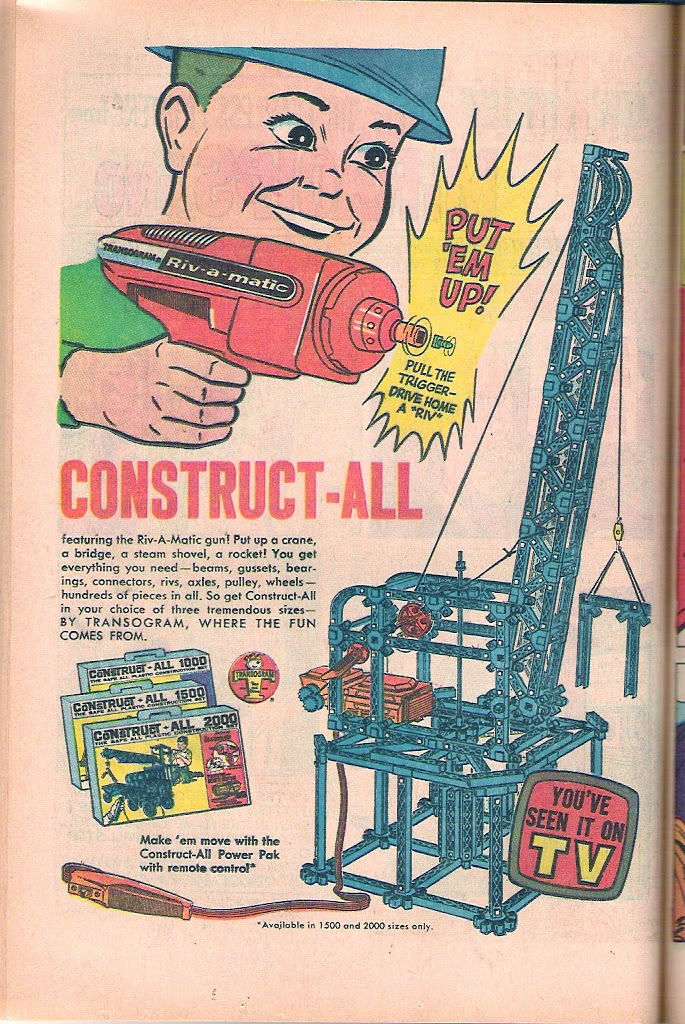 First up today is this ad from the March 1968 cover-dated Harvey comics, and it's for the Construct-All, which I can only imagine was produced in competition with Erector Sets! Unfortunately, I wasn't able to find out much about this Transogram toy!

Movie of the Week: Teenage Zombies!


Apparently this film was also known as "Teenage Torture"! 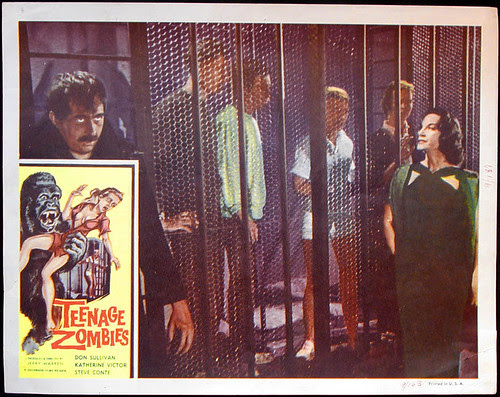 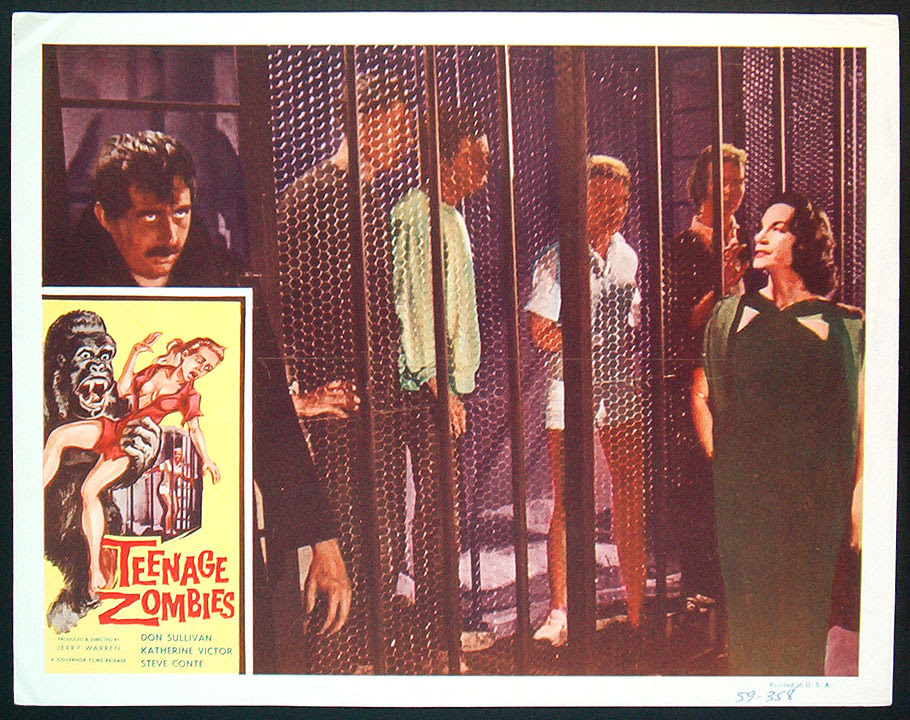 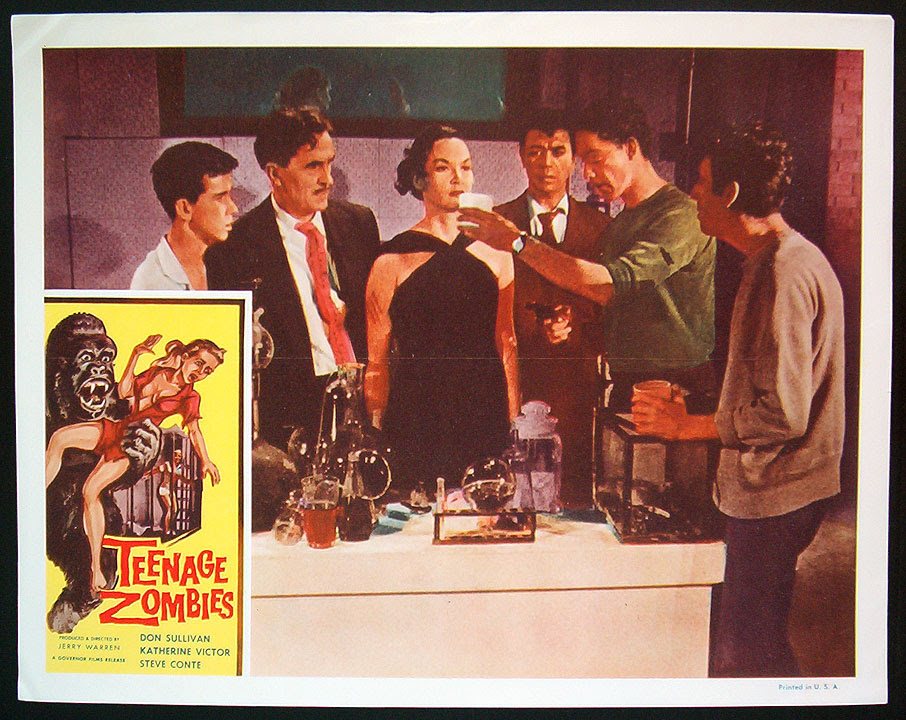 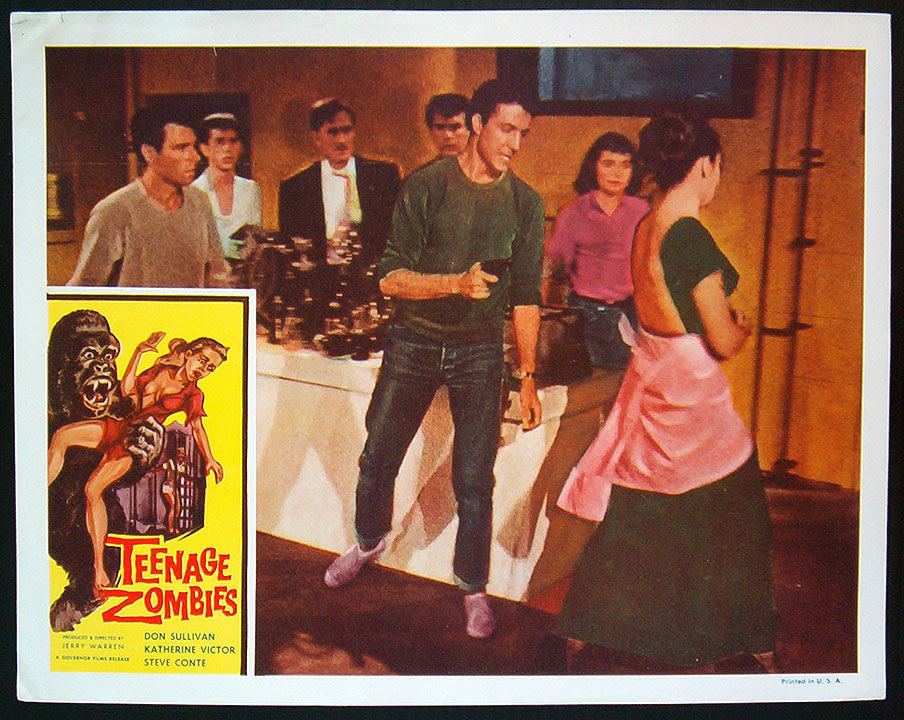 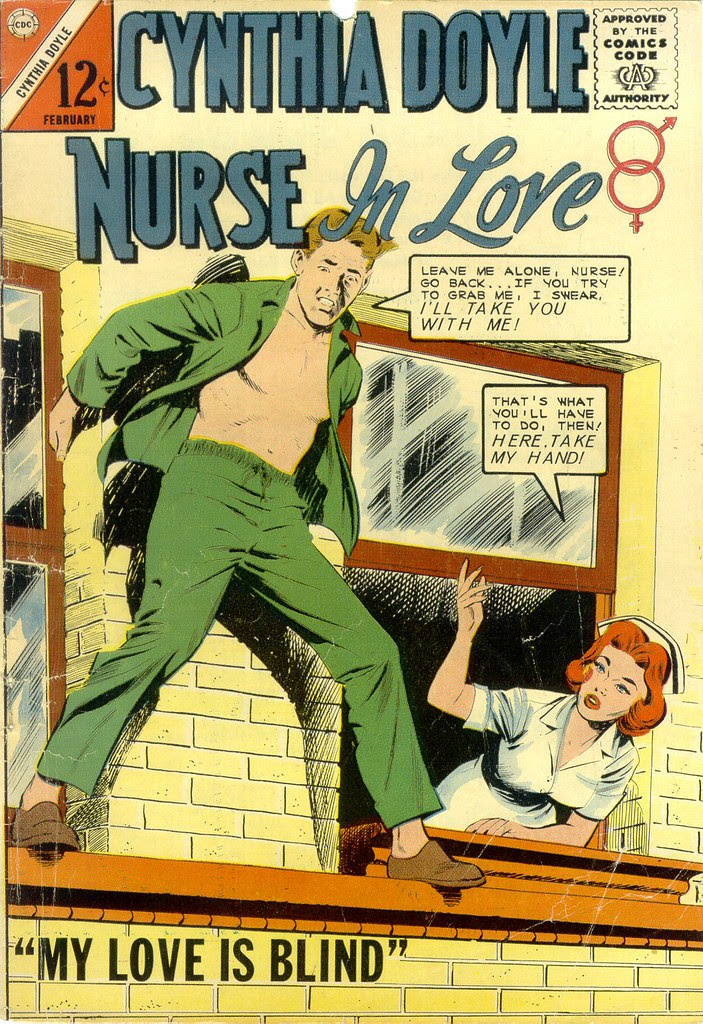 It hardly seems possible, but today marks the six-year anniversary of this blog, which began as "Waffyjon's Random Thoughts" and evolved to "Jon's Random Acts of Geekery"! At this point, the blog is approaching 4,700 posts (with the 5,000th post to come before I know it)!

The blog's come a long way from its earliest posts... the first day, I made several posts, then the next day, the first of my fake Godzilla Movie Comics covers, then four days with nothing, two days of a couple of posts each, then more Godzilla fake comics... and I worked hard to avoid skipping days after that! However, I missed posting on February 23 of 2005, March 3 through 7 of that year, the 10th through the 18th, only a few other days in March of that year... missed a bunch of days in April... but eventually I was able to get on track. Thanks to Blogger eventually allowing advance posting, I was able to not only get to daily posting, but also getting several months ahead! How far ahead? Well, at one point I was at least three months ahead of the game! Right now, I'm actually writing this post on December 19 of 2010, so I'm not even two months ahead as of this writing... but I'll get further ahead soon!

As things have progressed, features have come and gone, and some have even returned, like the Comics Advertisements! I've also done some spin-off blogs (some of which have ended their runs, others are continuing way beyond this date). As much fun as some of the spin-off blogs have been, I have to honestly say that I don't believe I'll be starting new spin-off blogs at this time (although that may change, if inspiration strikes)! The day will likely come where everything will be retired save for Random Acts of Geekery and the Comic Reading Library -- the other blogs will likely run out of material by early 2012. Like I said, I work as far ahead as I can!

I'd like to thank everybody that's been reading this blog, as well as my other blogs, whether you've been here from the beginning or have joined me along the way! I'd especially like to thank those of you who've supported the blog via linking to it from your own blogs or websites, those who have checked out the advertiser links, and those of you who have purchased something through my Amazon Associates links!

I've got lots of great stuff planned for the future of this blog... the eventual return of "The Way of the Geek" (assuming I can get more interviewees lined up), plus all-new features, like "Geek TV"! All the features you've come to expect will continue as well, such as "Cool Stuff," "Fandom Library," "Give-A-Show Fridays," "Children's Book Theatre"... pretty much everything currently running except for "Movie of the Week" (which will be ending sometime in the next few months as I reach the end of the alphabet) and "By the 10s" (when I run out of titles I haven't posted here yet)... and the end of "Original Comic Art" is likely to happen before too much longer, for that matter!

So stick around! I promise you daily geekery here for as long as I can continue to work on this blog!
Posted by Jon K at 12:01 AM 4 comments: 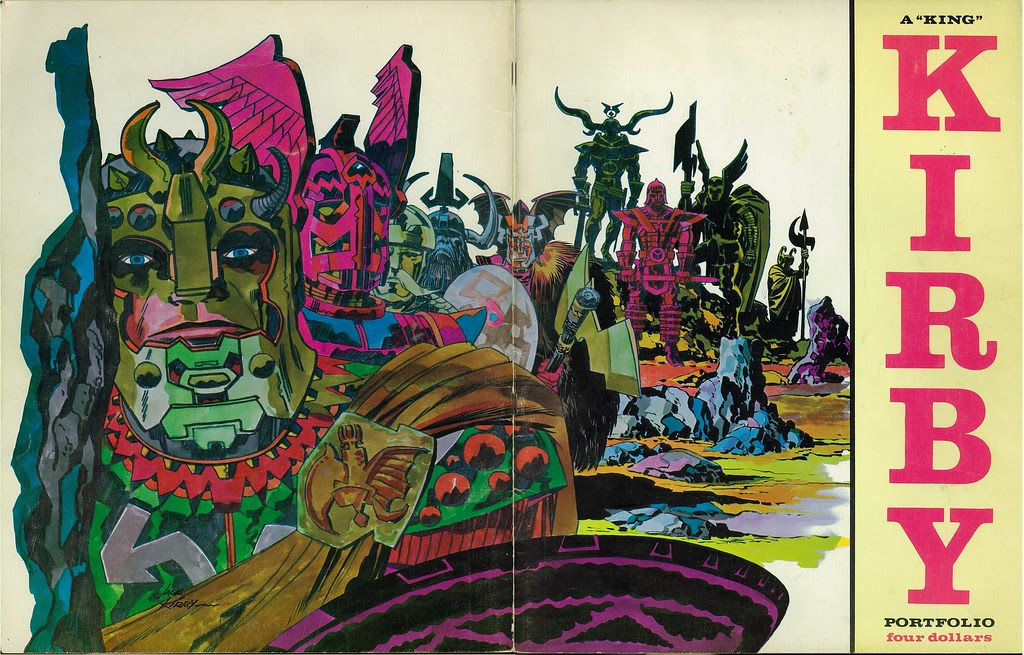 Wow, lots of stuff for you guys to read today, isn't there? Here's this week's Fandom Library entry, Kirby Unleashed!

CBT: The Adventures of Superman! 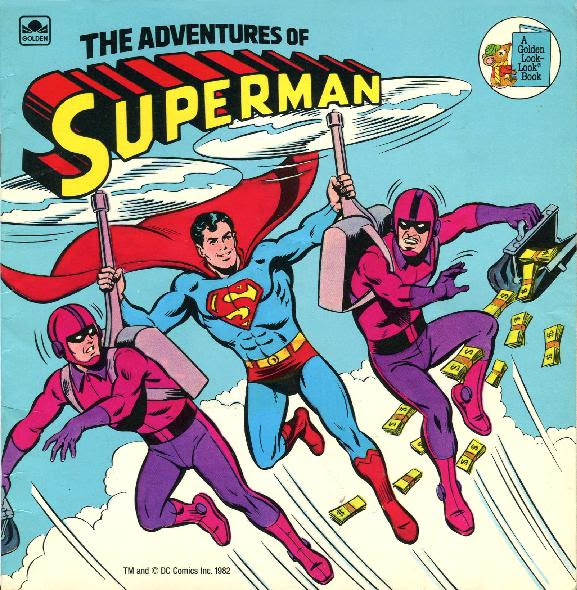 This installment of Children's Book Theatre brings you "The Adventures of Superman," a 1982 book with Kurt Schaffenberger artwork! With this, we finish up all of the slides for Remco's Ugly Mugly Projector! Next week, we'll start checking out some more of the UK Give-A-Show slides from Chad Valley! 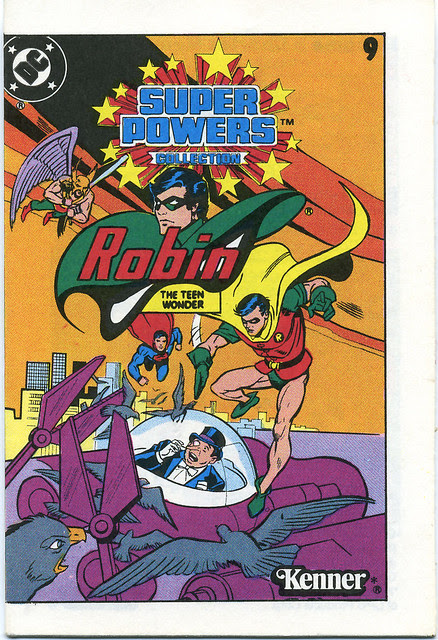 First up this time around is the Robin Super Powers comic! The rest after the jump! 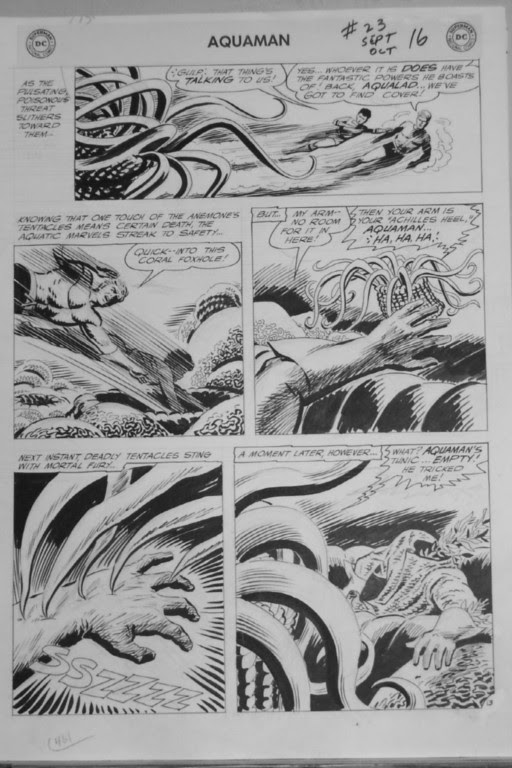 First up in this week's original comic art parade is page 16 from Aquaman #23, by Nick Cardy! 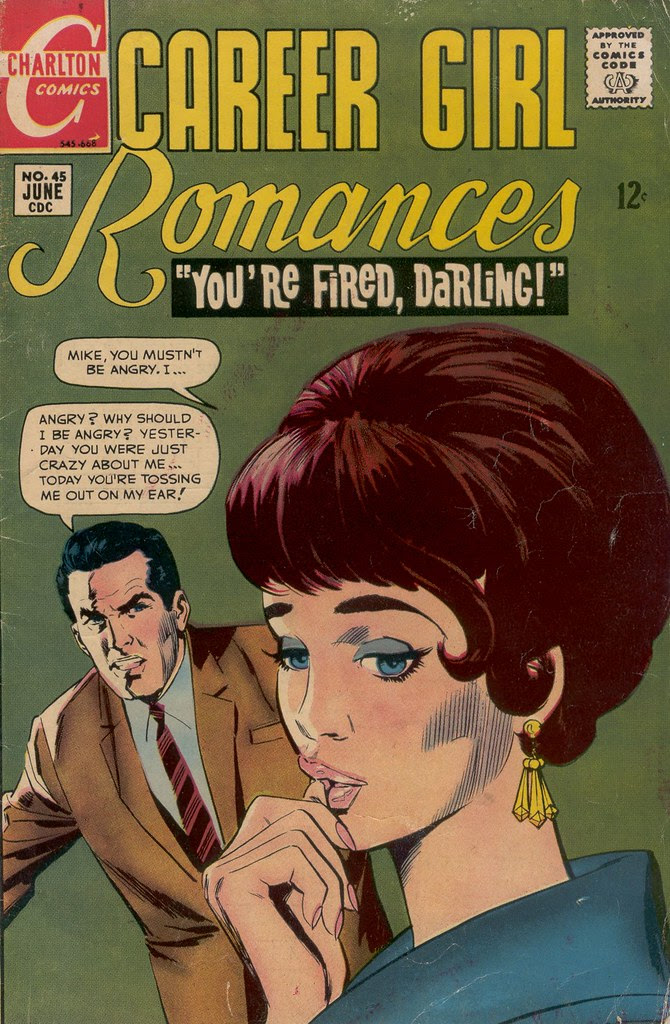 This week's Ten of a Kind focuses on British television shows that I have enjoyed watching! And so, in no particular order... here they are -- with a video clip (if I could find one) -- after the jump!

Email ThisBlogThis!Share to TwitterShare to FacebookShare to Pinterest
Labels: 10 of a Kind, Television, videos

By the 10s: Crime and Punishment Illustories! Crime and Punishment was another "True Crime" book from Lev Gleason, and it was fairly successful, lasting 74 issues! Above is issue #10. 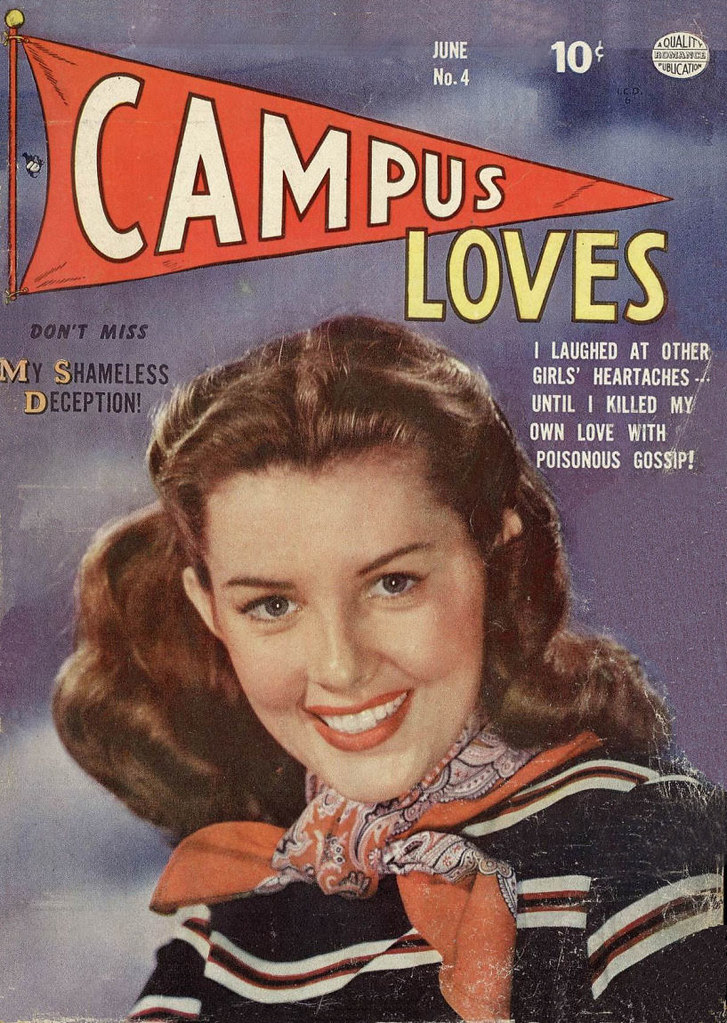 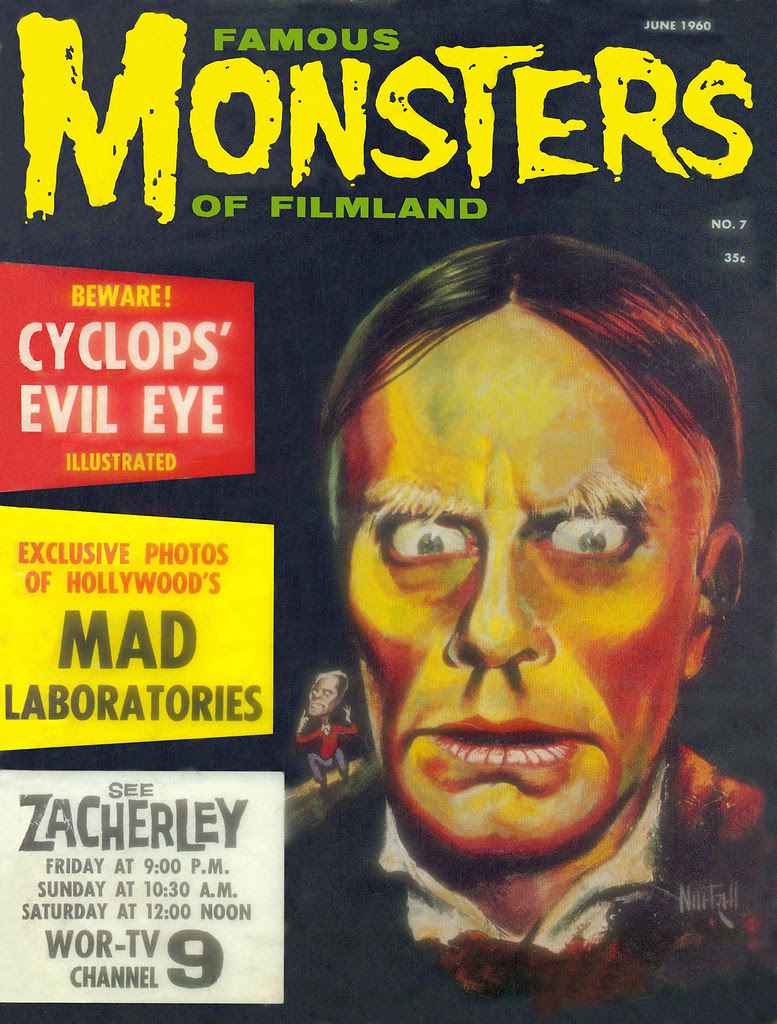 Dog of the Geek: Dynomutt! 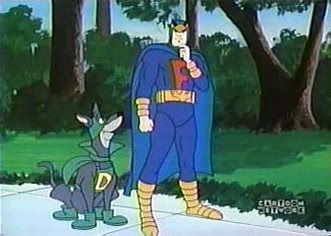 Biography: Dynomutt lives with his owner, millionaire socialite Radley Crown, in Big City. When the Falcon Flash is alerted, the duo enter The Falcon's Lair, where they become Dog Wonder and The Blue Falcon, and go off to solve a variety of crimes.

Powers:
Dynomutt is a robotic dog with a bewildering array of abilities. Most commonly used was his ability to extend his limbs, similar to Marvel Comics' Machine Man.

Miscellaneous:
In the Dexter's Laboratory episode in which Dynomutt appeared, the Blue Falcon has brought his damaged dog to Dexter for repairs, but Dexter decides to build an all-new Dynomutt, which goes out of control. Dexter has to repair and reactivate the original Dynomutt in order to put the new Dynomutt X-90 back on the scrap heap. A few of the villains Dynomutt fought had names that were puns on more established comic book villains, such as the Queen Hornet! And as if that wasn't odd enough, the Queen Hornet teamed up with several other Big City villains to form... “The Injustice League of America”! Apparently Hanna-Barbera staff was unaware that such a villain group was already appearing in Justice League of America comics. The Blue Falcon has appeared on a few Adult Swim programs without his sidekick. 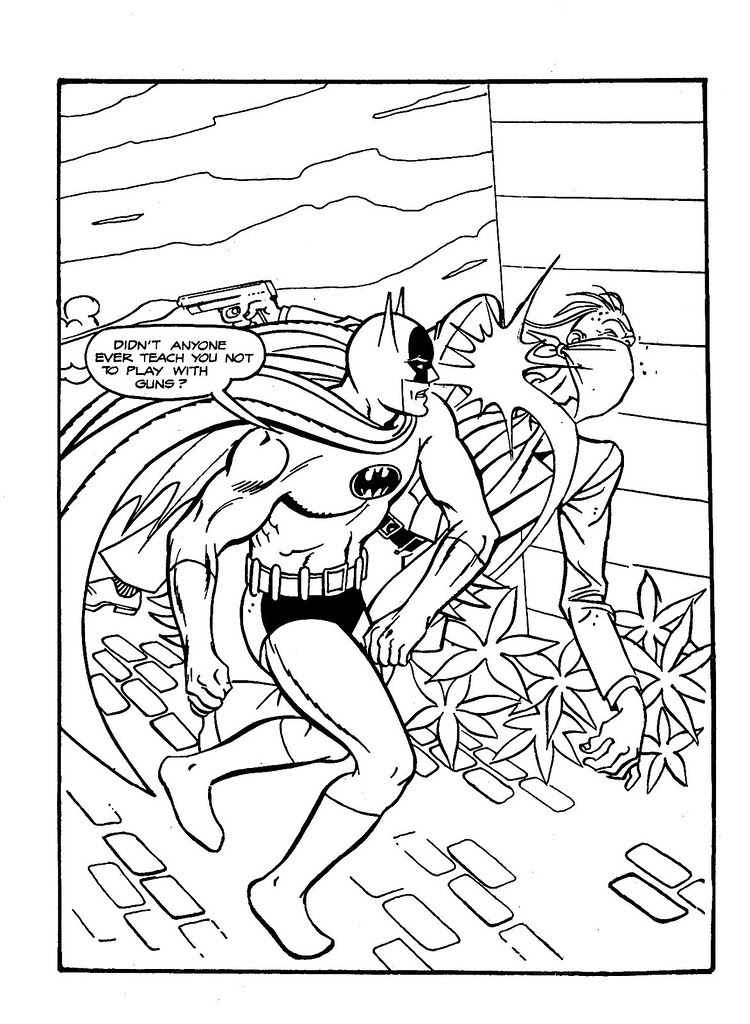 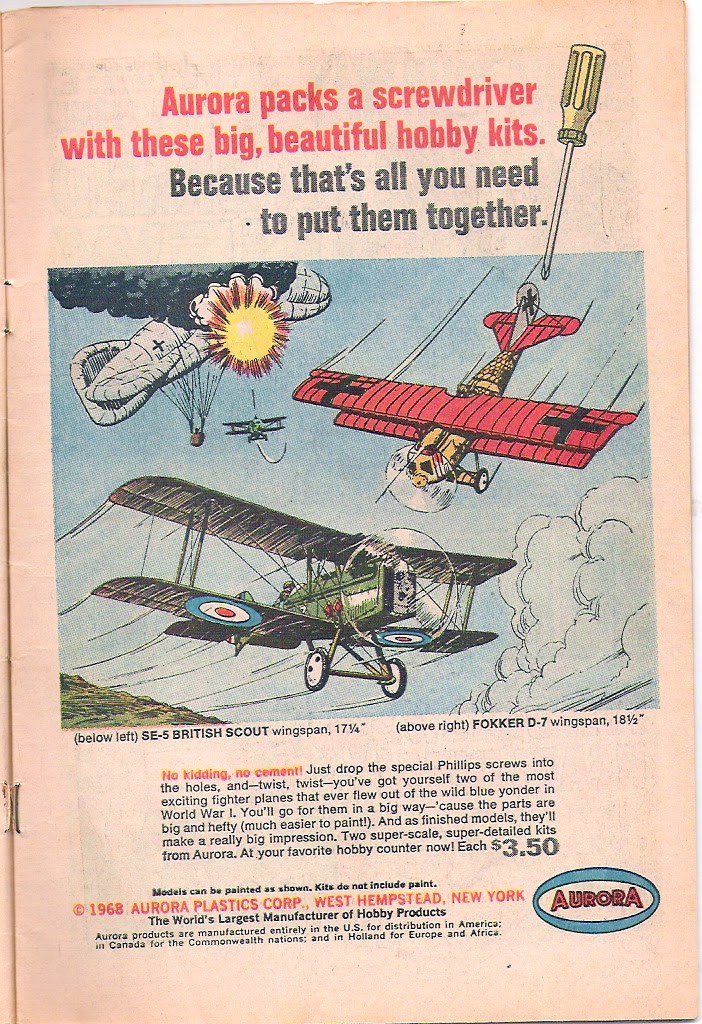 First up in this week's installment of comics ads is this full-page Aurora ad from the June, 1968 cover-dated DC books!

This week, Monster Monday starts out with some monster cards! 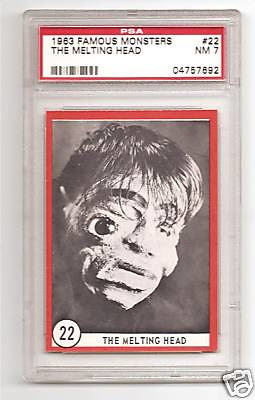 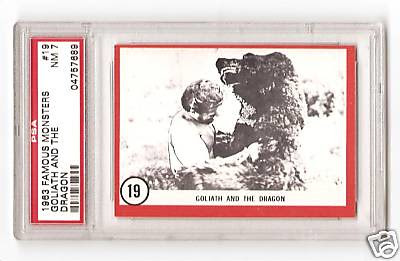 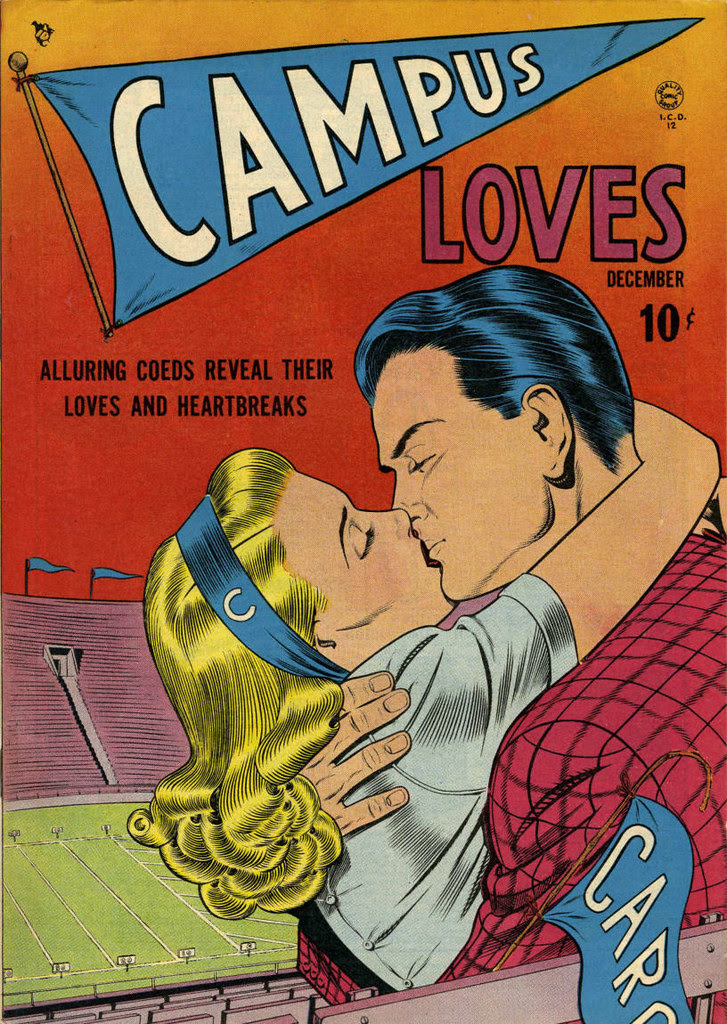 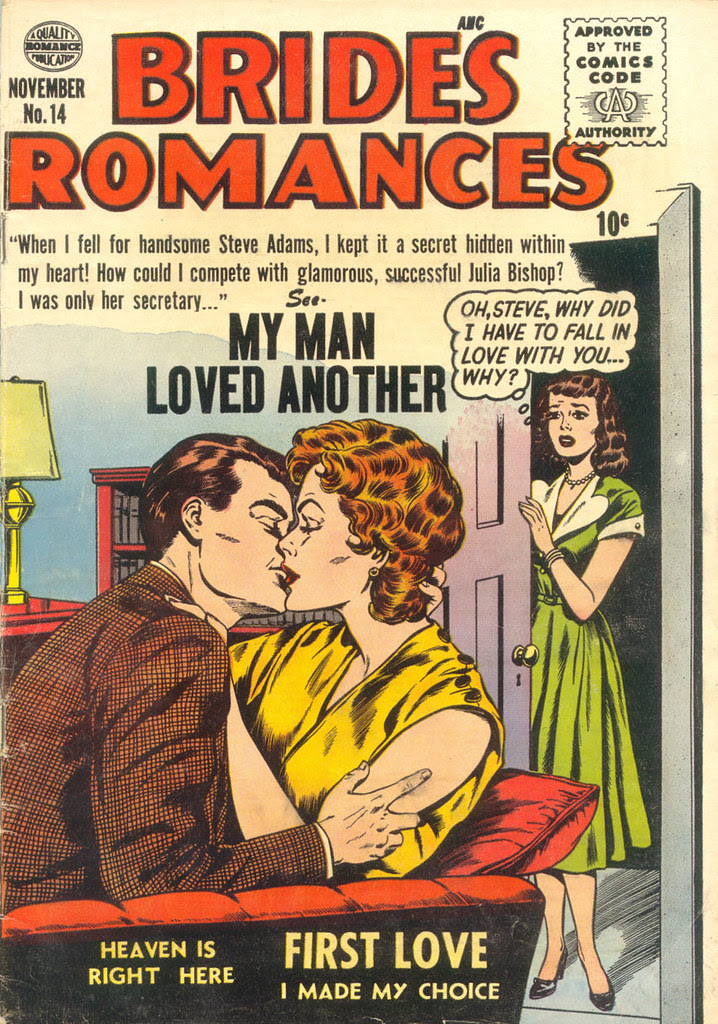 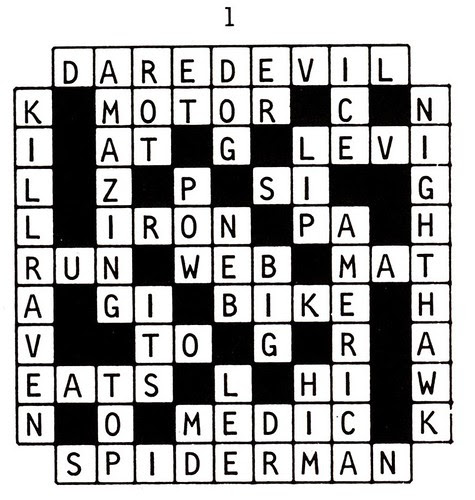 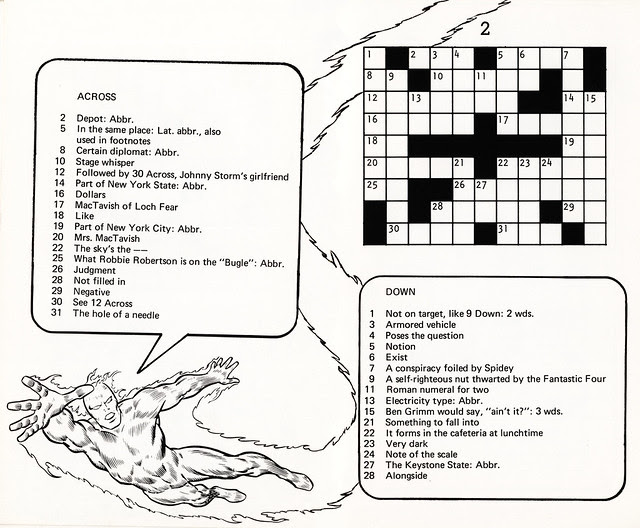 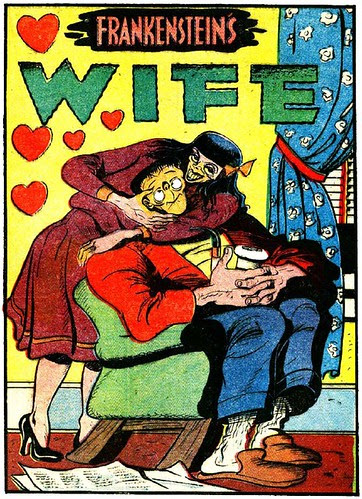 The third story in this issue features Frankenstein in “Frankenstein's Wife,” and once again, it's all Dick Briefer! The bride in this couple definitely doesn't look like Elsa Lanchester, does it? I do have to say, I get a kick out of the oversized briar pipe and the slippers!